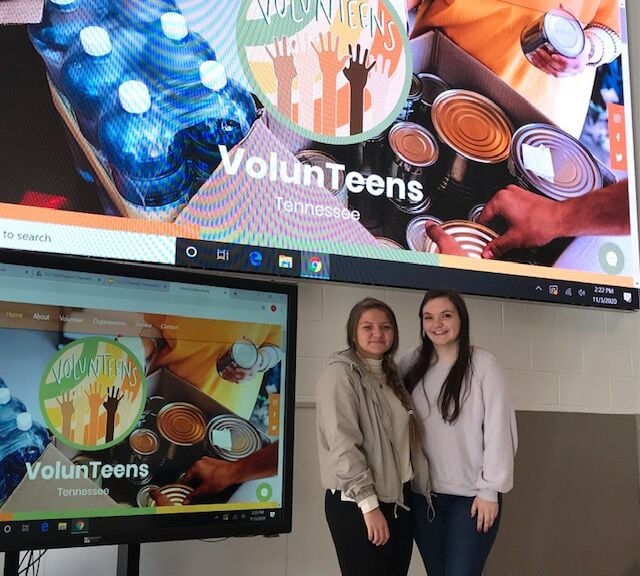 WCS students Mikiela Garcia-Halbig (left) and Delaney Miller stand alongside a projection of their VolunTeens website at the Entrepreneurship and Innovation Center. 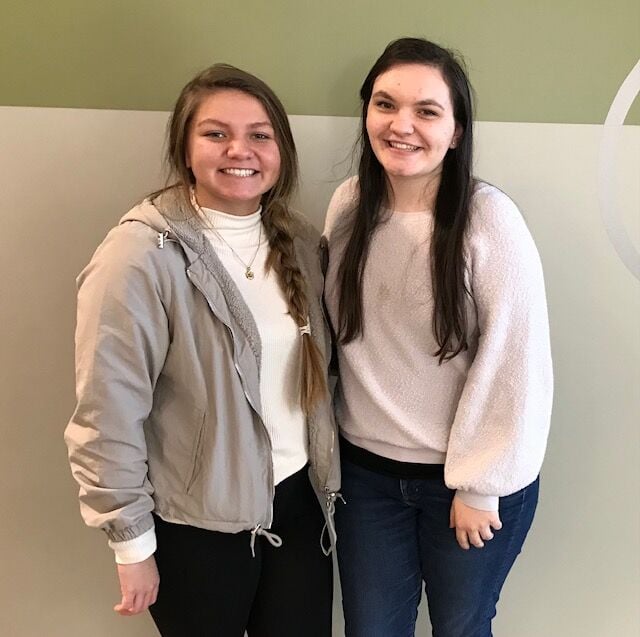 As a relative newcomer to Williamson County, Independence High School senior Mikiela Garcia-Halbig wanted to find volunteer opportunities in the area that are especially suited for teenagers.

It took some doing.

“I am hardly ever informed of volunteer opportunities here,” said Garcia-Halbig, who is enrolled in her second year in the Williamson County Schools district’s Entrepreneurship and Innovation Center. “Our school doesn’t advertise it very much, and I know other kids have the same problem. It was hard for me to find any [places to volunteer] I was interested in, or else they were pretty well hidden.

“We wanted to really make it easy on the students and on the nonprofits.”

To do so, Garcia-Halbig partnered with Page High senior Delaney Miller and created a program called VolunTeens through their work at the EIC.

They recently pitched the idea to several staff members from Williamson Inc., and their project is now in motion with a website and social media accounts on Instagram and Twitter. The students have also printed flyers that they’ll place in high schools in the county to help spread the word.

“I loved the idea,” said Leigh Bawcom, director of Member Engagement for Williamson Inc. “Before I came to work for the chamber, I worked for two different nonprofits. I have a heart for nonprofits. … I know with the number of nonprofits in Williamson County, it’s challenging to find volunteers because there are so many opportunities for people to get involved.

“I personally thought that this was a great way to match up teens and students that want to be involved in the community, and help them to find something that speaks to them and that they’re passionate about.”

VolunTeens serves as a liaison of sorts between nonprofits and teenagers. An organization can go to the website and fill out a form to provide details on what it needs, and students can visit the site to learn what volunteer opportunities are available.

“Since launching a week ago, we’ve already been in touch with 10 different nonprofits and already have meetings lined up,” Garcia-Halbig said Wednesday afternoon at the EIC on the campus of Franklin High School.

Volunteens is but one example of what students are creating at the EIC, which launched in the 2019-20 school year. It gives Garcia-Halbig and Miller a real life look at the nonprofit and business world, and also brings know-how they’ll carry beyond high school.

“I think the experience is the No. 1 factor,” Garcia-Halbig said. “We’ve learned so much and met so many people. It’s really informative for life in general. It’s a good life skill — we’re learning to manage our time, to meet people, as well as about advertising and creating things.”

“I’ve already gained so much experience,” she said. “I’ve gotten so much better at public speaking, because every so often we have to present what we are doing and we have adult mentors we have to keep in contact with who help us a lot.

"I came to the EIC because I wanted to try something new. And now I want to major in marketing when I go to college next year, and I would never have known that if I hadn’t tried this class.”