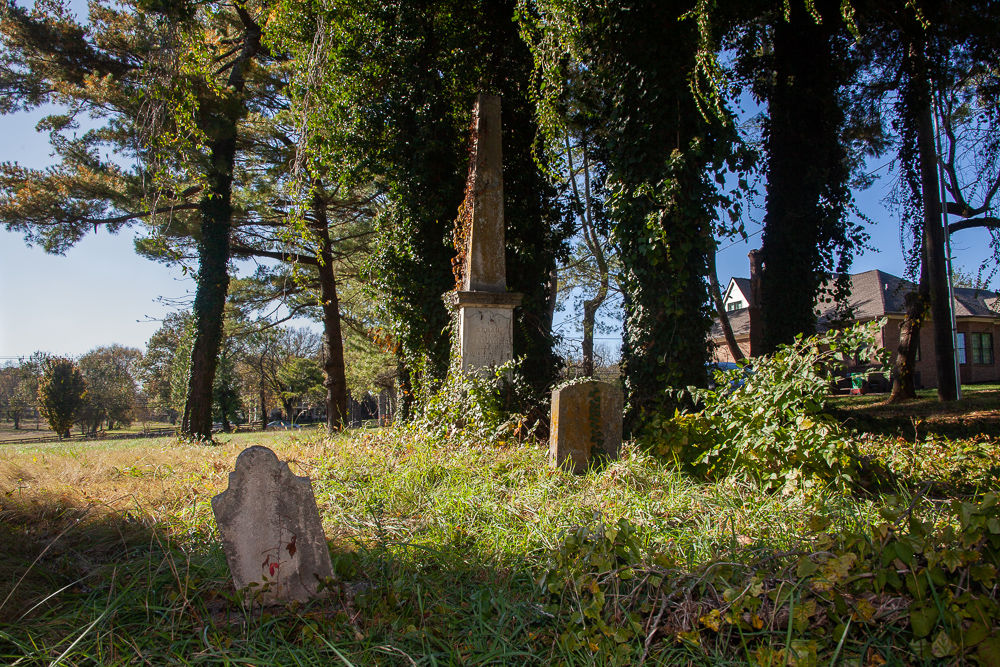 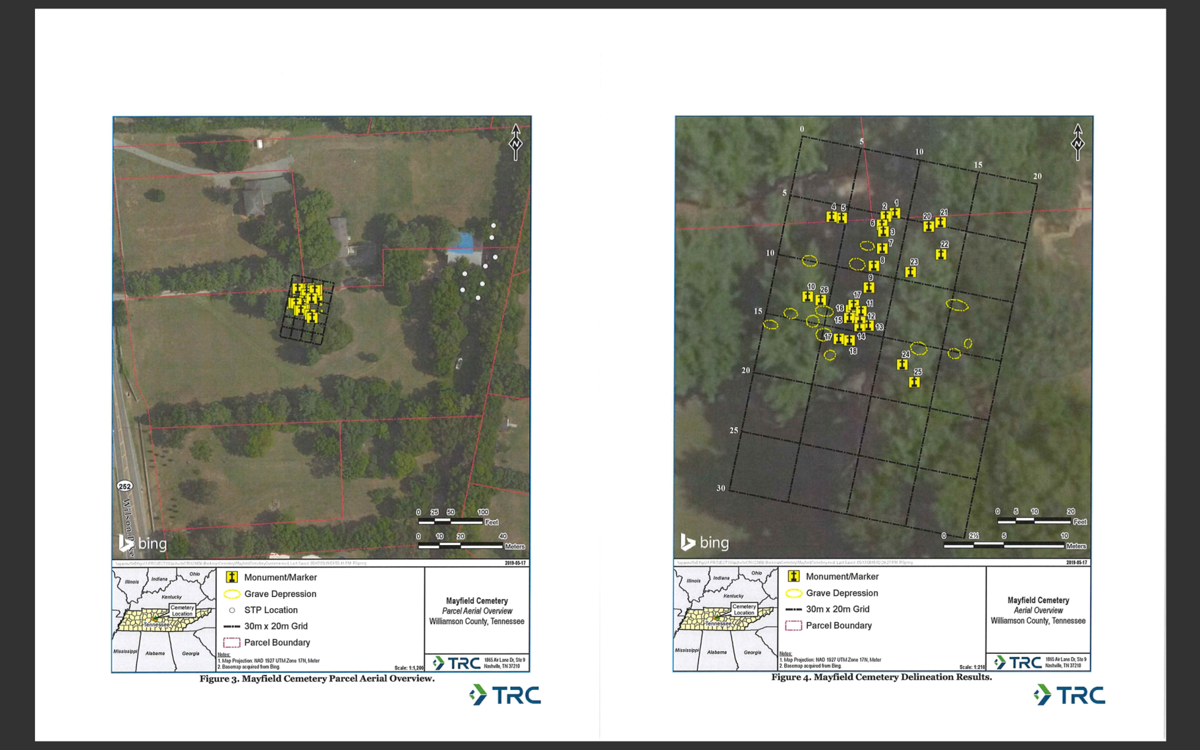 Screenshot of a page of the petition filed by the Beckham family detailing the findings by TRC. 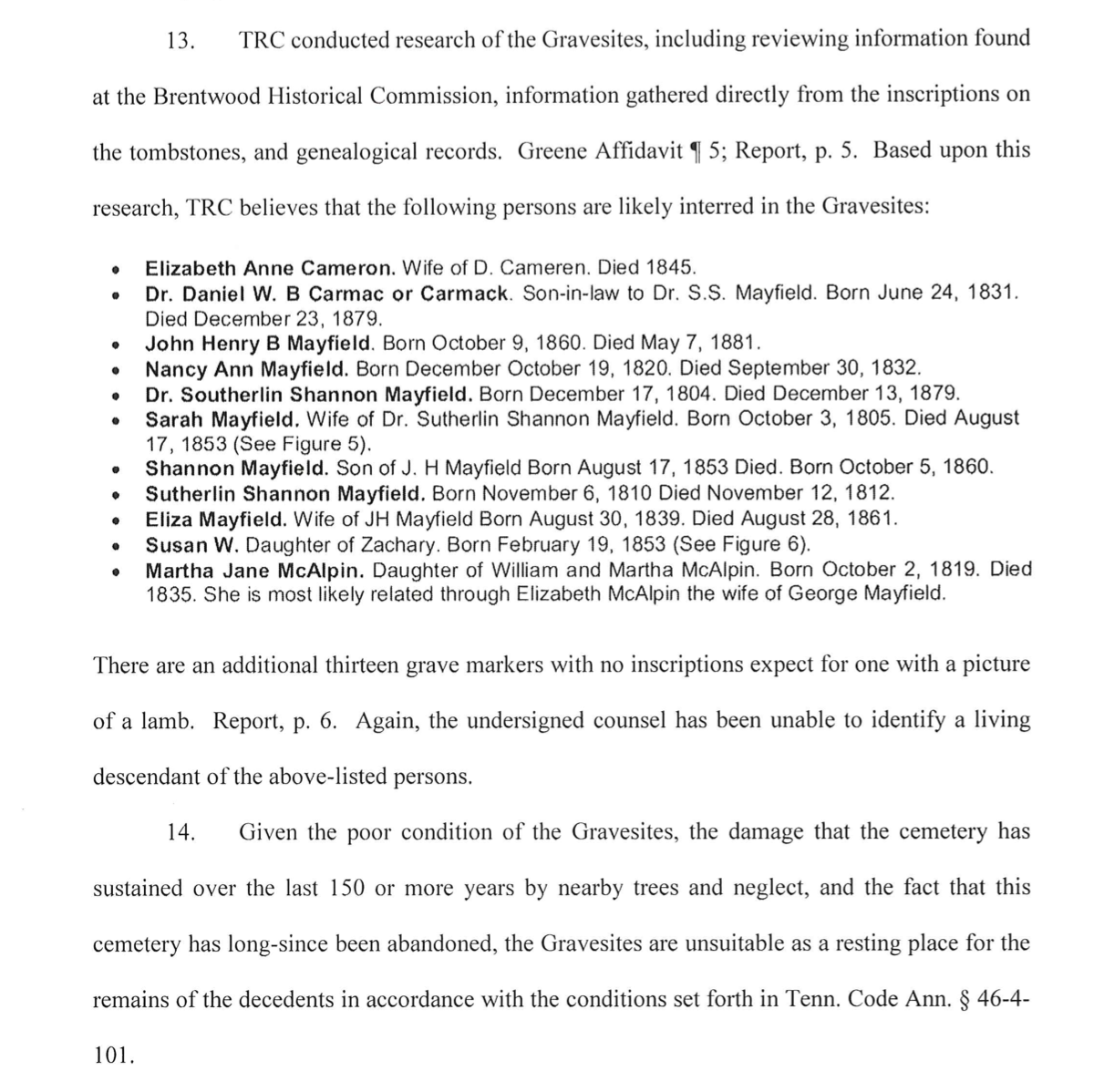 Screenshot of a page of the petition filed by the Beckham family detailing the findings by TRC.

A small cemetery holding the remains of some of the City of Brentwood’s founders has become a flashpoint in the debate around honoring the history of Brentwood and the future of land use in a community that continues to grow.

The Mayfield Cemetery is located on Wilson Pike in the middle of a large plat of land that’s mainly a field peppered with a few trees between two large homes and backing up to the Mayfield subdivision.

There are 11 known people buried in the cemetery and around 13 unknown remains believed to also be buried in the 20-by-30-foot cemetery that has 25 known monuments or markers. Many of the markers are hidden under overgrown grass and weeds, while others have been broken and or sit collected at the base of trees.

The land was once part of the Mayfield dairy farm, Brentwood’s first known white settlers whose graves date date back to the early 1800s and, according to the Brentwood Historic Commission, was settled in the 1790s.

The land has passed through several owners over the past 50 years and was purchased in the spring by Robert and Melissa Beckham. The Beckhams hired the engineering firm TRC to survey the land with the an archeologist with experience in relocating cemeteries.

The Beckhams filed a petition through the Williamson County Chancery Court to allow for the relocation and restoration of the currently dilapidated cemetery after placing a public notice in the Williamson Herald as required by law.

According to the petition dated Sept. 20, 2019, the Beckhams requested the approval from the court to relocate the cemetery to the back of the lot in order to build a home.

“I, along with TRC, will be responsible for ensuring that the graves are removed in accordance with the burial disinterment/reinterment plan. In undertaking to relocate the dependents, TRC and I will conduct the reinterment of the remains with due care and with decency and with respect to the dependents,” the petition reads.

The petition states that the Beckhams would assume legal and financial responsibility for moving the cemetery and would also restore and maintain the cemetery which, according to a member of the Mayfield family, has had no maintenance other than having the grass cut over the past 30 years.

The Beckhams also planned to create a new driveway for the home so that the existing driveway could be used by family members to visit the new cemetery site without having to come in contact with the homeowners.

“Petitioners will also erect an appropriate memorial at the reinterment sit in accordance with Tenn. Code Ann. 46-4-104. Beckham Affidavit 7. The new cemetery will be surrounded by fencing and/or other natural landscape, in order to separate it and protect it from further despair. Beckham Affidavit 7. Going forward, the cemetery will be maintained by Petitioners during their ownership fo the Property,” the petition reads.

The issue came to a head in a special called meeting of the Brentwood Historic Commission on Friday where a heated discussion saw the commission draft a letter in opposition to the proposed relocation.

While neither the Historic Commission nor the Mayfield family have legal right to the land, the input from both parties would be taken into account by a judge.

“First and foremost, we find this request totally disrespectful to those buried there. They should be allowed to remain where they chose to be buried, within the existing Mayfield Cemetery. They were the earliest pioneers, being the first non-Native American settlers, and held in the highest regard with Dr. Sutherland Mayfield being the personal physician to President Andrew Jackson. They should be held in the same regard today. This request, based on building plans, does not do that,” the letter from the Historic Commission to the court reads.

The Historic Commission also said in the meeting that this could set a precedent that they did not agree with, and said in the letter that several attempts to clean the cemetery in the past by Mayfield family members were met with resistance by a previous property owner, although a homeowner who lives beside the cemetery said that no one has lived on that property or for at least 30 years.

In the meeting, the Historic Commission made it clear that they were collectively against the petition with Commission member Ashley McAnulty calling the plan to move the cemetery “one of the worst things we’ve ever seen in the City of Brentwood.”

A descendant of those buried in cemetery, Kenny Mayfield of College Grove, said in a phone call that while he was initially opposed to the idea, after discussing the idea with more than two dozen family members, he and those family members gave their blessing to the Beckhams, who he said were trying to be respectful of his family and the history of Brentwood.

“We actually think it would be a great thing,” Mayfield said.

Mayfield said that the upkeep of the cemetery was beyond the ability of anyone in the family to handle and that if the Beckhams were willing to spend their own money to relocated the dilapidated cemetery and provide a new, more presentable resting place that he saw no reason not to support the move.

Mayfield stressed that he is a supporter of preservation and historical societies and sees both sides of the argument, but added that the cemetery, which until Saturday he hadn’t visited in nearly 30 years, deserved to be preserved in a better state than it is today with overgrown weeds and broken and missing headstones.

Landowner and petitioner Melissa Beckham said on Friday that she was going to continue her petition and met with members of both the Brentwood Historic Commission and members of the Mayfield family on Saturday to explain what she said were her intentions to not only build a home but honor those entombed.

However Beckham said in a phone call Monday that despite the blessing of a sizable group of the Mayfield family, and the estimated $13,000 that she and her husband have already spent to professionally survey the land and the added legal fees, that they will no longer pursue the petition to relocate the cemetery.

“After I thought about it over the weekend and prayerfully-considered every option, I realized that I just don’t think this is worth the long-term fight that this is going to become,” Beckham said.

Beckham said that they were committed to spending the estimated total of $50,000 to relocate and restore the cemetery in an effort to continue to honor the history of the Mayfield family, but that they now plan to plan to sell the approximately three-acre property.

In the meantime Beckham said that she hopes the Brentwood Historic Commission will do what they can to restore the cemetery while the Beckhams are the still property owners.

It’s unclear if the property would ever be considered for purchased by the city, but according to Brentwood Community Relations Director Deanna Lambert that would be unlikely as the land is not connected to any parks and does not have any historic structures on the property.

While the issue was quickly and passionately challenged resulting in what the Historic Commission may see as a victory, it’s unclear if this now public spat will impact the value of the land and the ability of the property to be resold.

It’s also unclear what steps if any the Historic Commission will take to restore the cemetery and be, as is stated in their opposition letter, “stewards of history in Brentwood.”