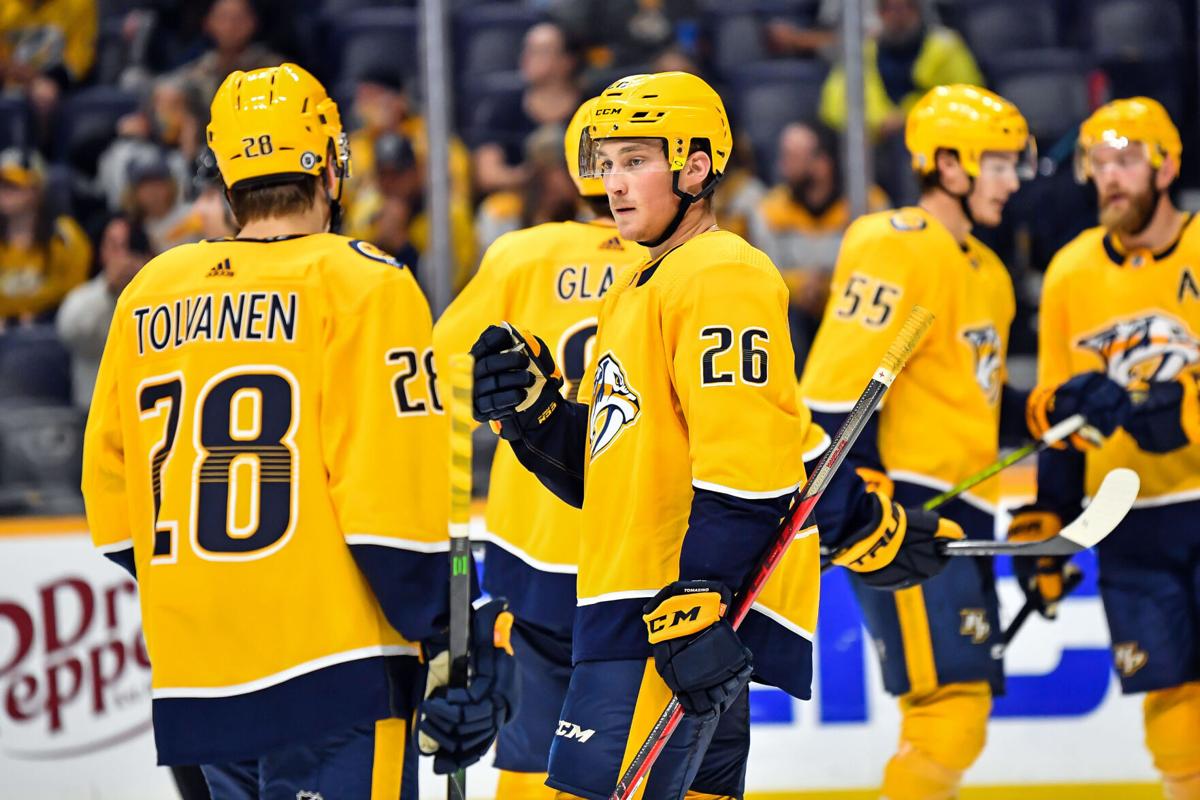 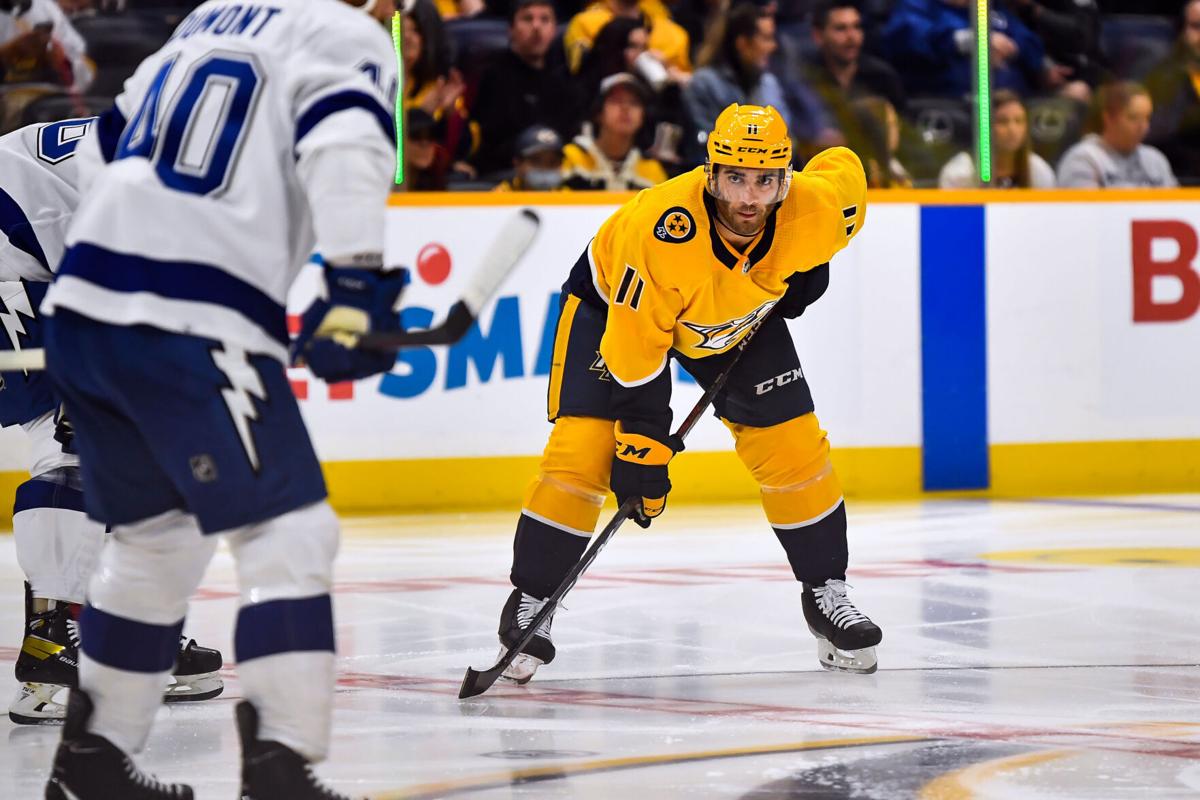 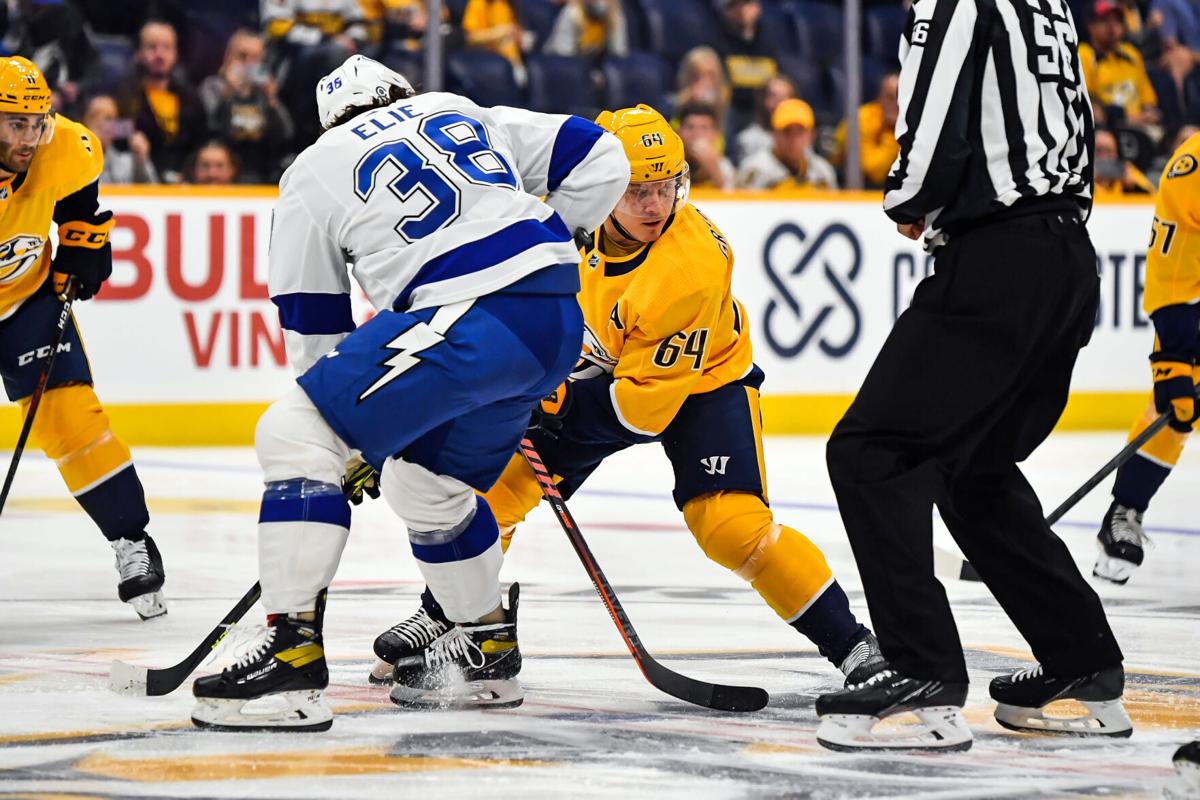 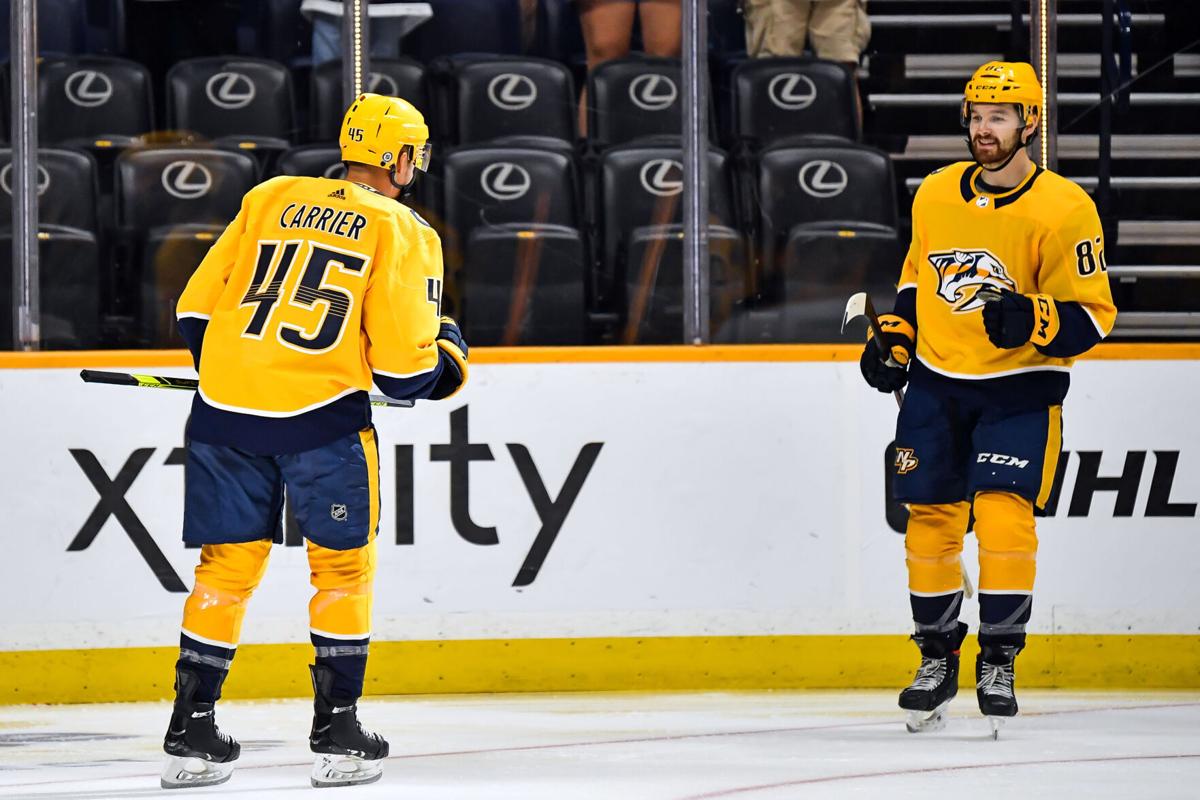 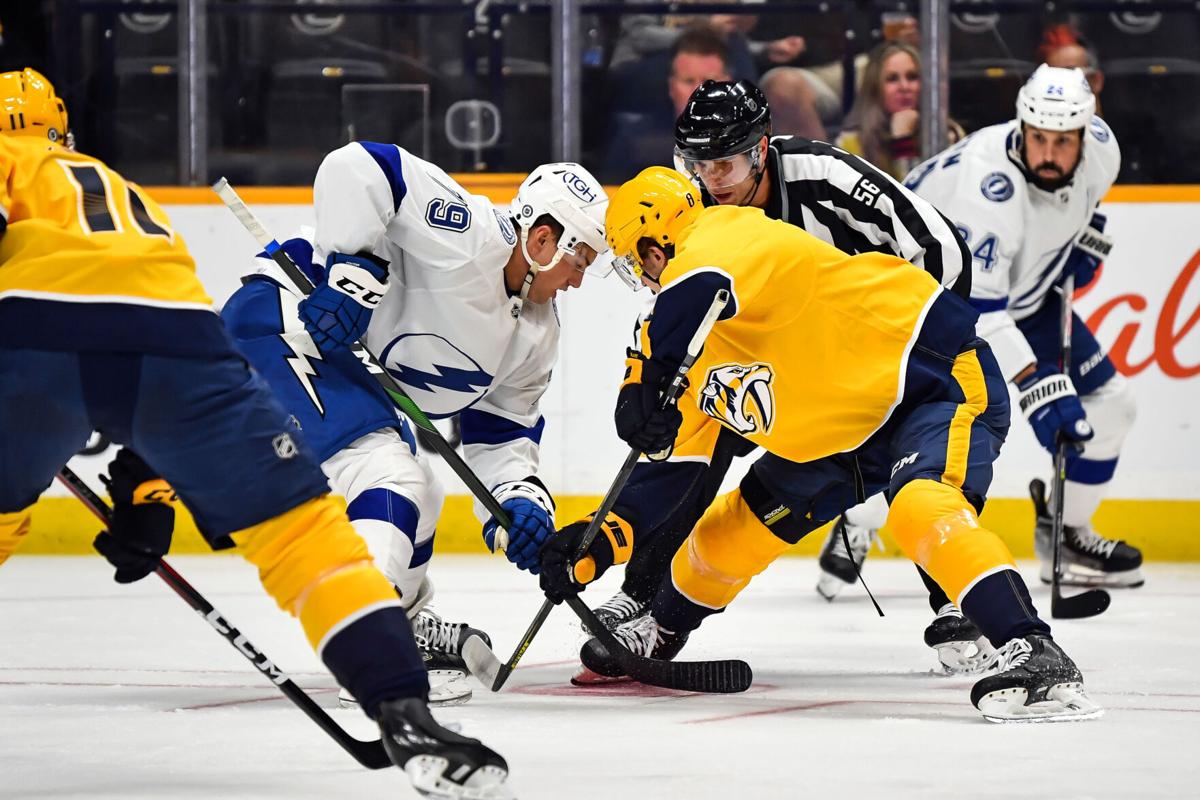 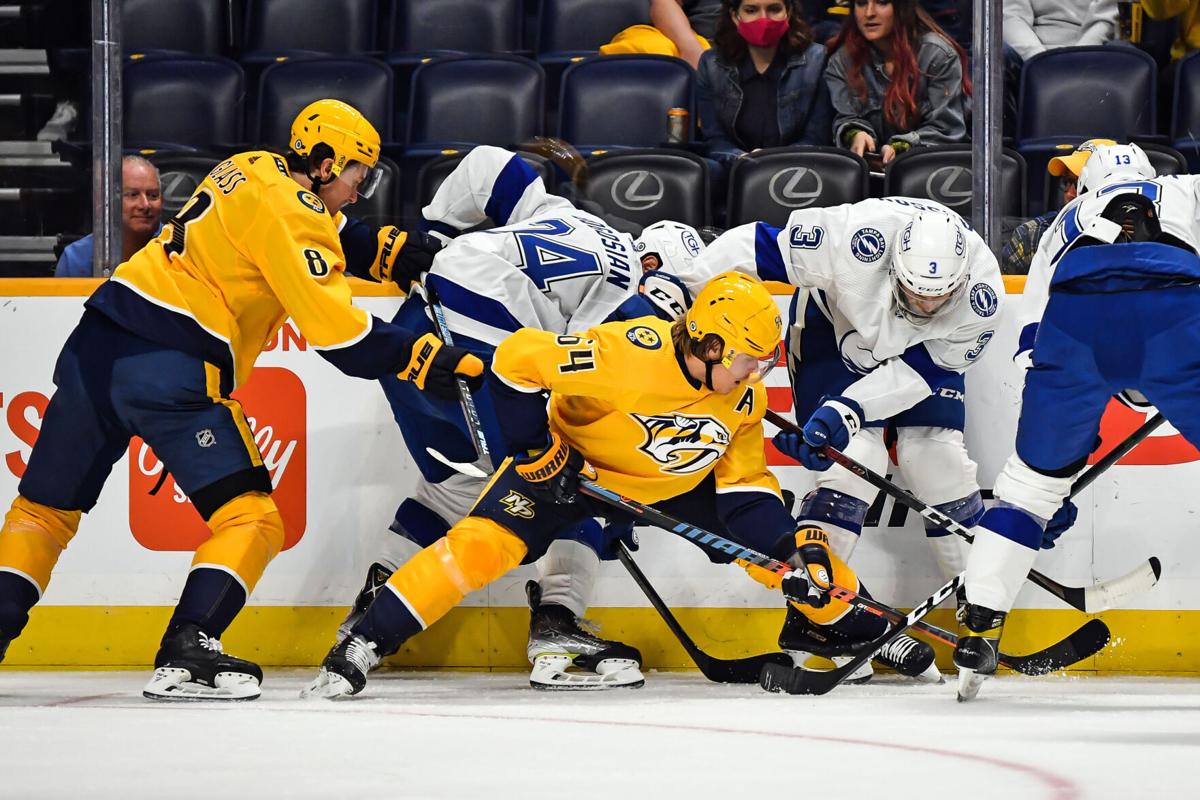 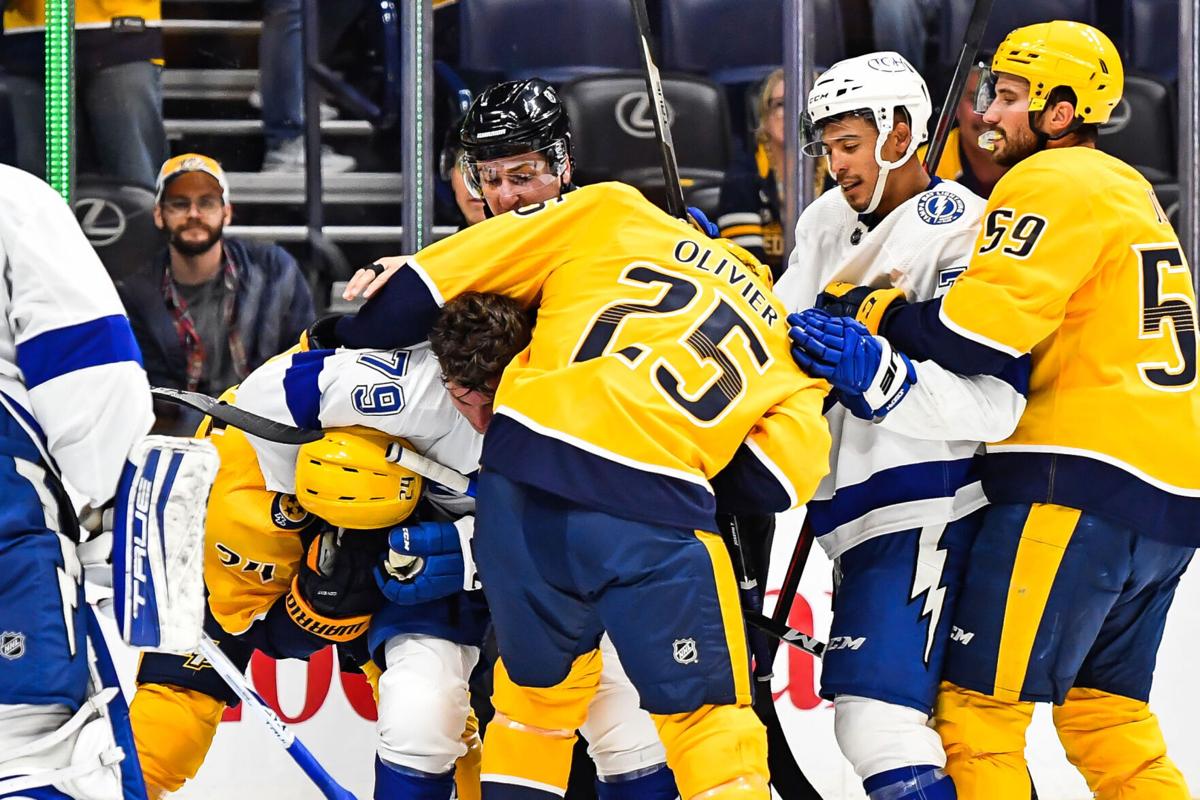 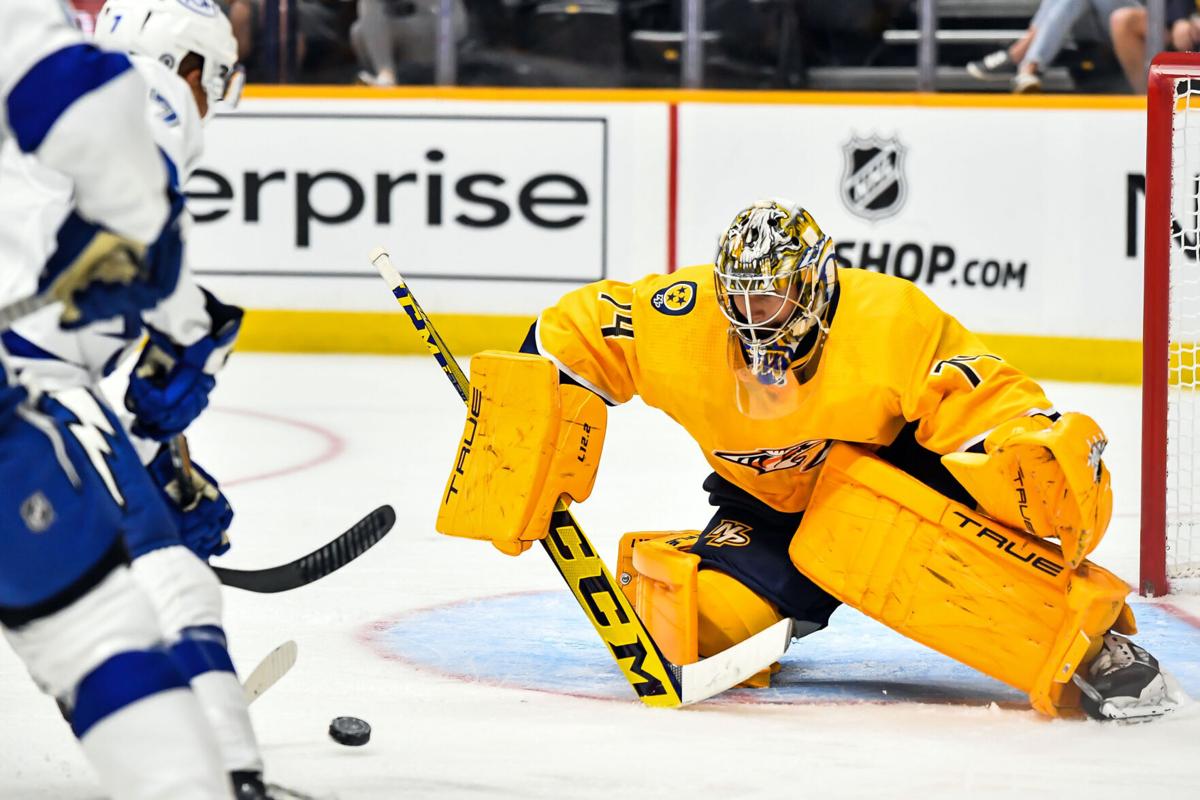 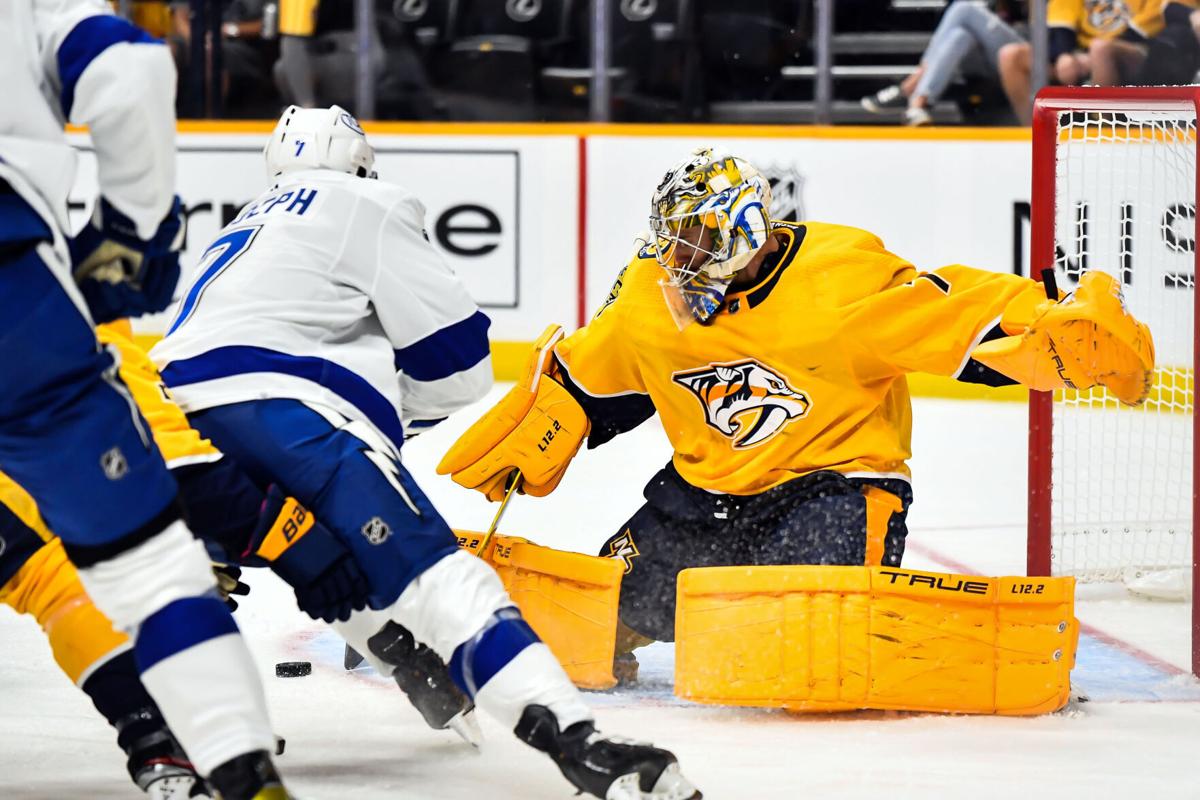 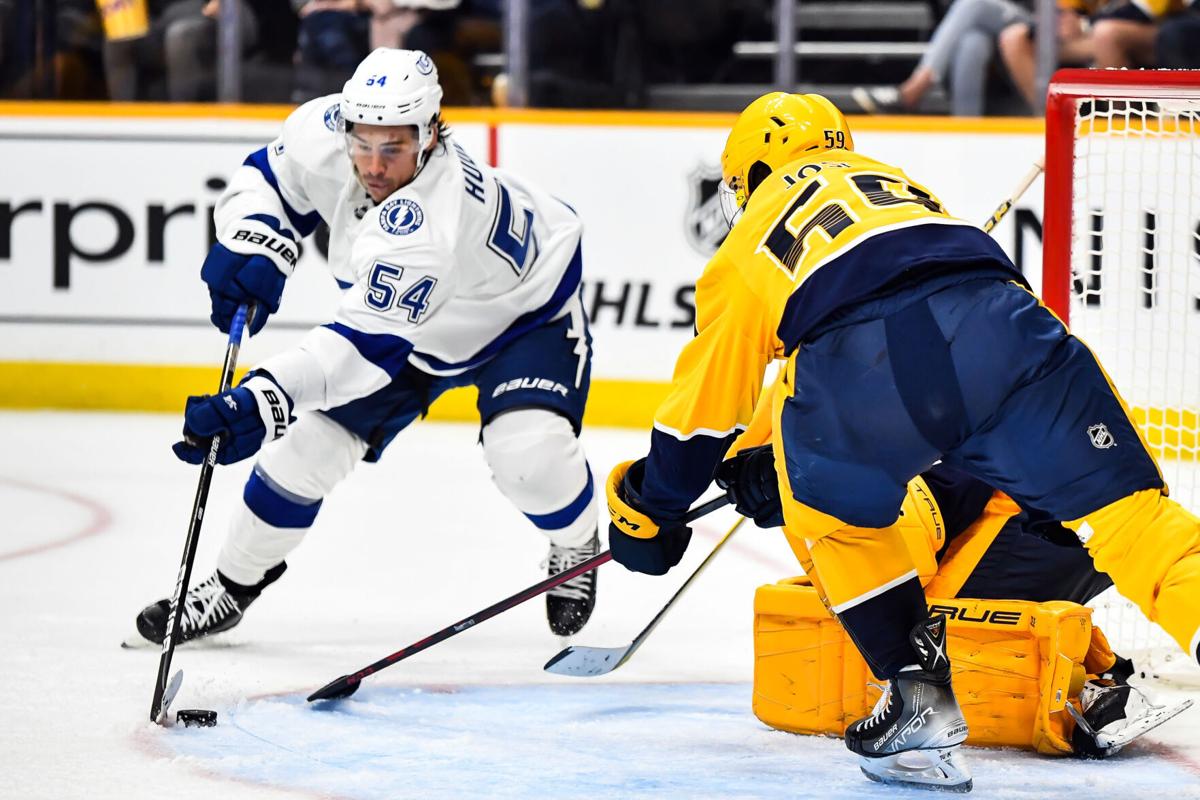 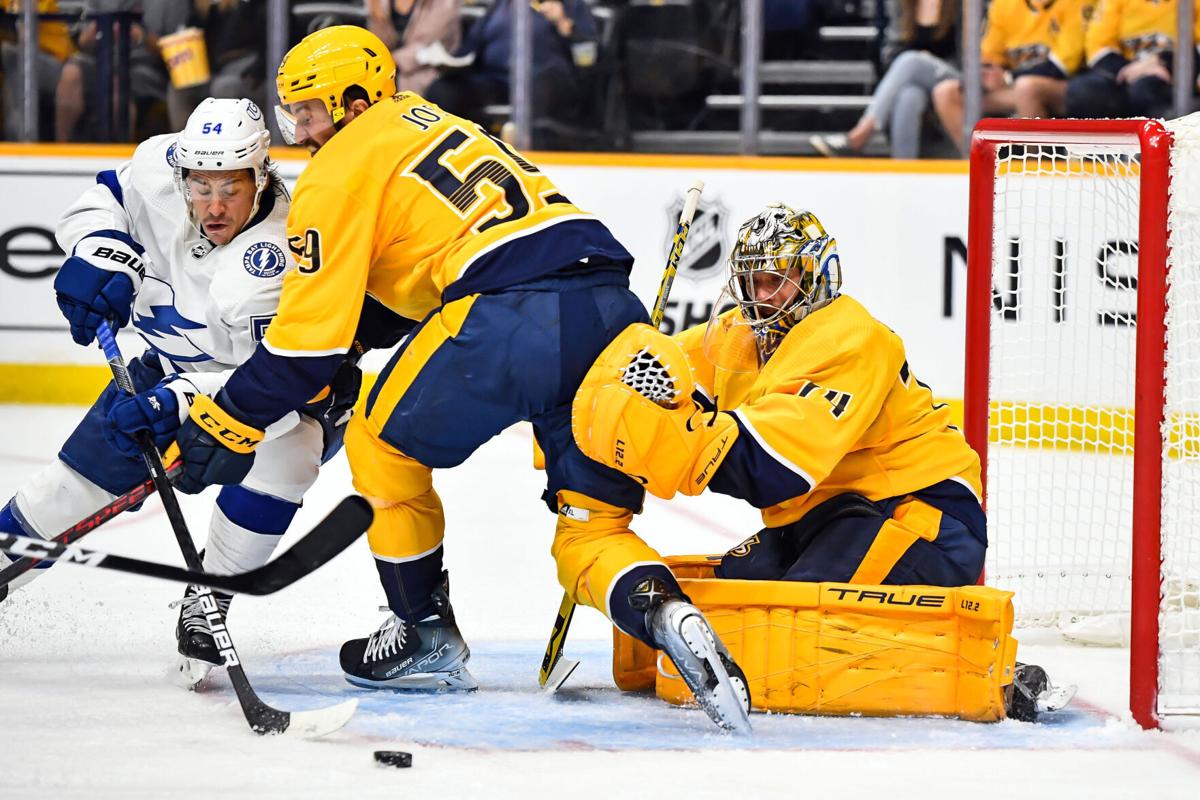 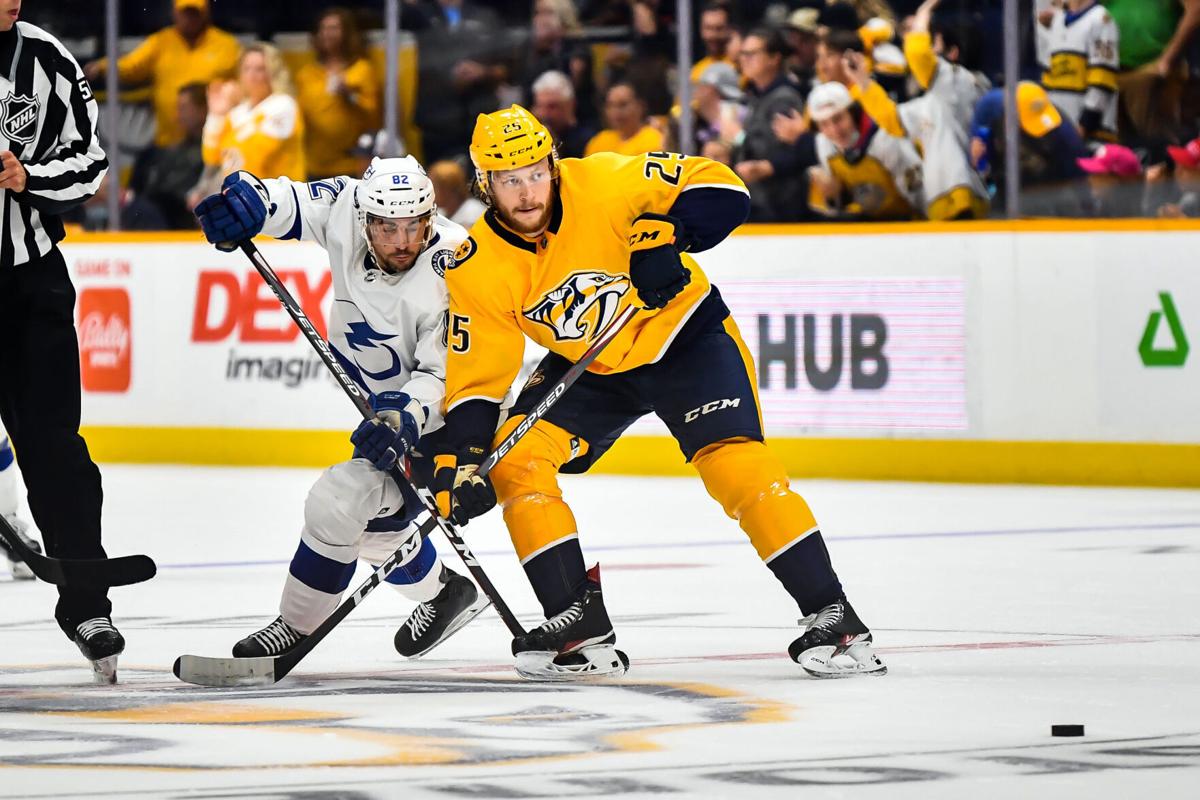 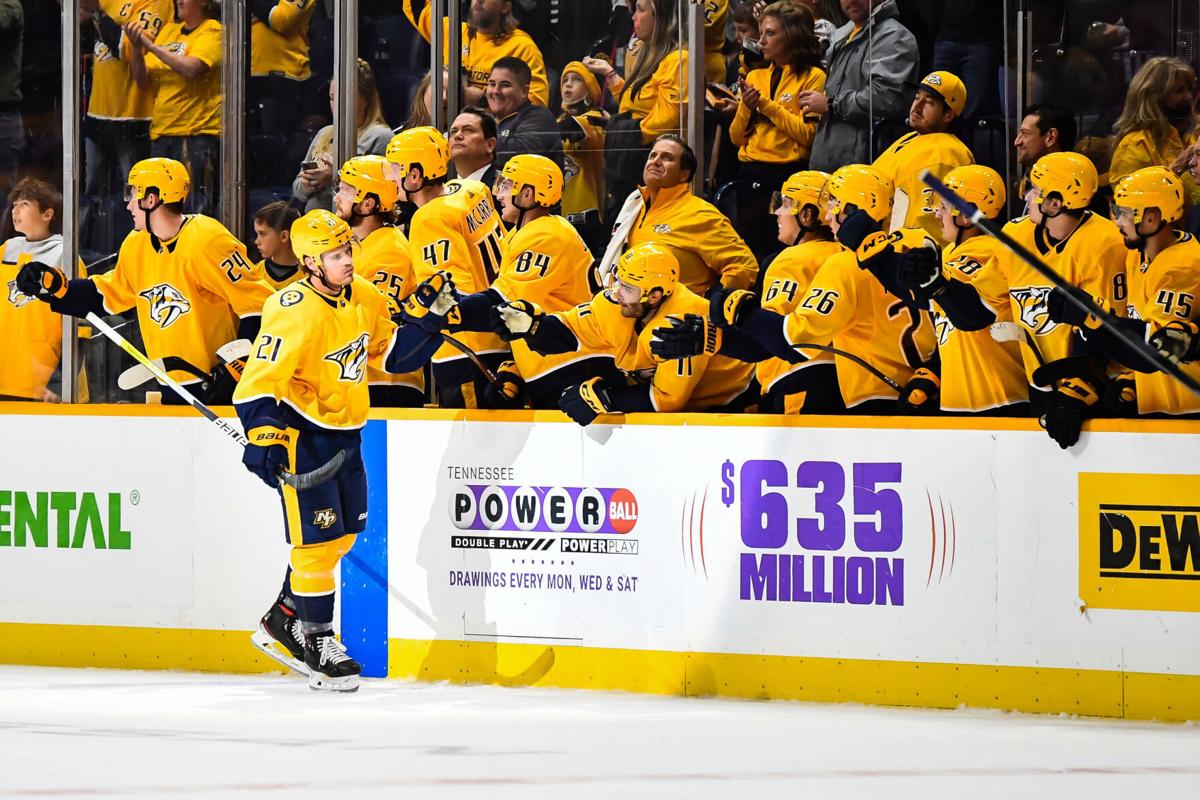 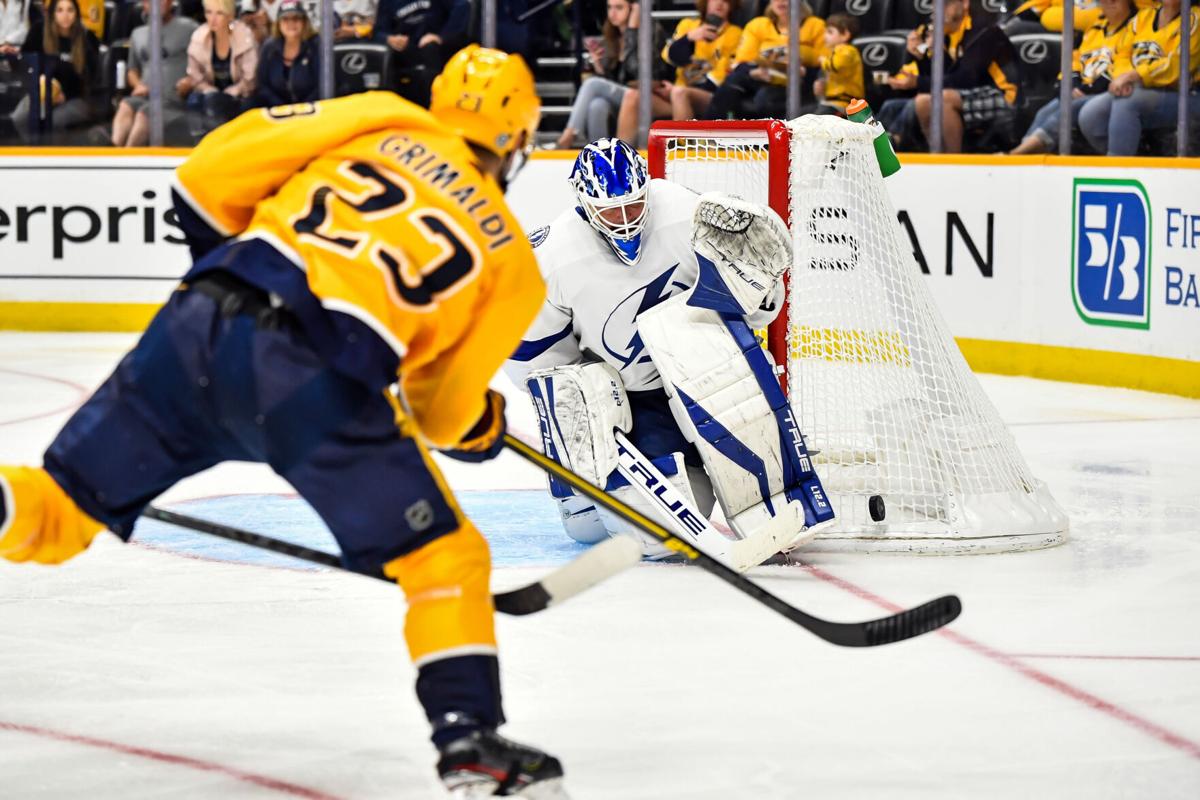 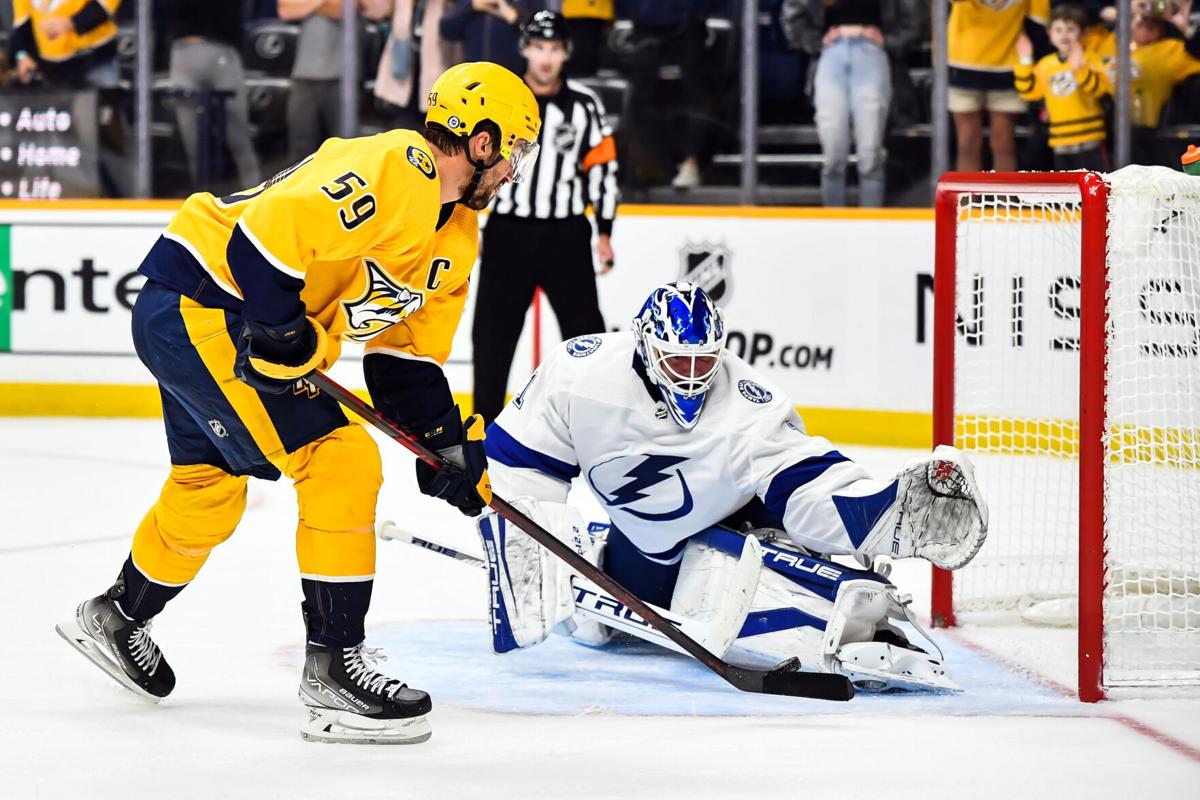 Welcome to the era of the competitive rebuild.

The Nashville Predators — not quite good enough to legitimately challenge for a Stanley Cup and not quite bad enough to warrant a full-on fire sale — are in a weird in-between state of transitioning to a younger roster while still holding an expectation of playing postseason hockey.

With a projected average age of 26 this season, the Predators are chock full of talented 20-somethings fighting for a handful of spots on the team’s opening-night roster.

Predators coach John Hynes gave fans a peek inside his mind on Saturday night in Nashville’s 6-1 preseason win over the Tampa Bay Lightning at Bridgestone Arena when he put three of his talented youngsters — Eeli Tolvanen, Cody Glass and Philip Tomasino — together on the same line.

The results were mixed.

“[I did it] just to see if there was chemistry between the three and if it would be a potential line if everybody makes the team,” Hynes said. “I thought they were okay tonight, but I would like to see a little bit more.”

Tolvanen, who had the third-most goals on the Predators last season, and Glass, the former No. 6 overall pick who came to Nashville via an offseason trade, have their spots all but locked in for the regular season. Tomasino, on the other hand, is still battling to earn his NHL roster spot.

The 20-year-old had a breakout year last season for the Chicago Wolves in the American Hockey League. He made the AHL All-Rookie team after scoring 13 goals and 32 points in 29 games while leading Chicago in points, plus/minus (+20) and shots on goal (91).

Tomasino wasn’t even supposed to be playing at the AHL level last season but was afforded the opportunity thanks to a rule change allowing junior league players to play with AHL clubs rather than sit out for a season due to COVID-19.

The 6-foot center credits that year for accelerating his development and readying him for the rigors of playing in the NHL.

“It was huge,” Tomasino said. “Getting the chance to play pro hockey a year earlier, under normal circumstances I might have been ineligible to play, I would’ve had to go back to juniors, so it was awesome for myself to compete against older guys who are obviously way stronger and compete harder.

“I think we had a great team (in the AHL) with a lot of great staff, so it was a great year for myself and it’s definitely really kind of helped me focus my mindset to making this team this year. I think it was the best situation for myself.”

Tomasino’s offensive skillset would be a welcomed addition to a Predators team that scored the ninth-fewest goals (152) in the NHL last year. Finding a role for him, though, could be one of the more difficult tasks for Hynes during the preseason.

It could be argued that if there’s no room on the top two lines, then Tomasino would be better suited starting the season in the AHL and continuing his development. The Predators have 10 days and two more preseason games to further evaluate him and make that call.