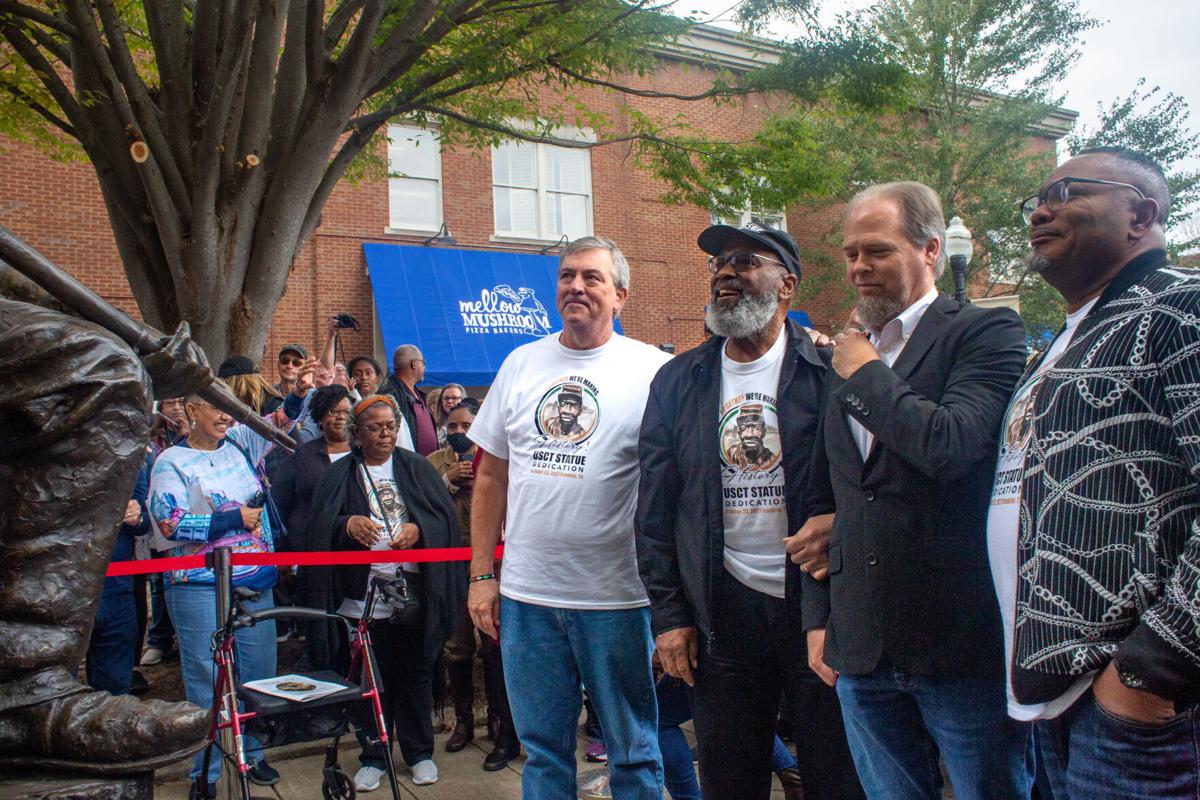 Founders of the Fuller Story look upon the statue that was unveiled Saturday morning. They are (from left) Kevin Riggs, Hewitt Sawyers, Eric Jacobson and Chris Williamson. 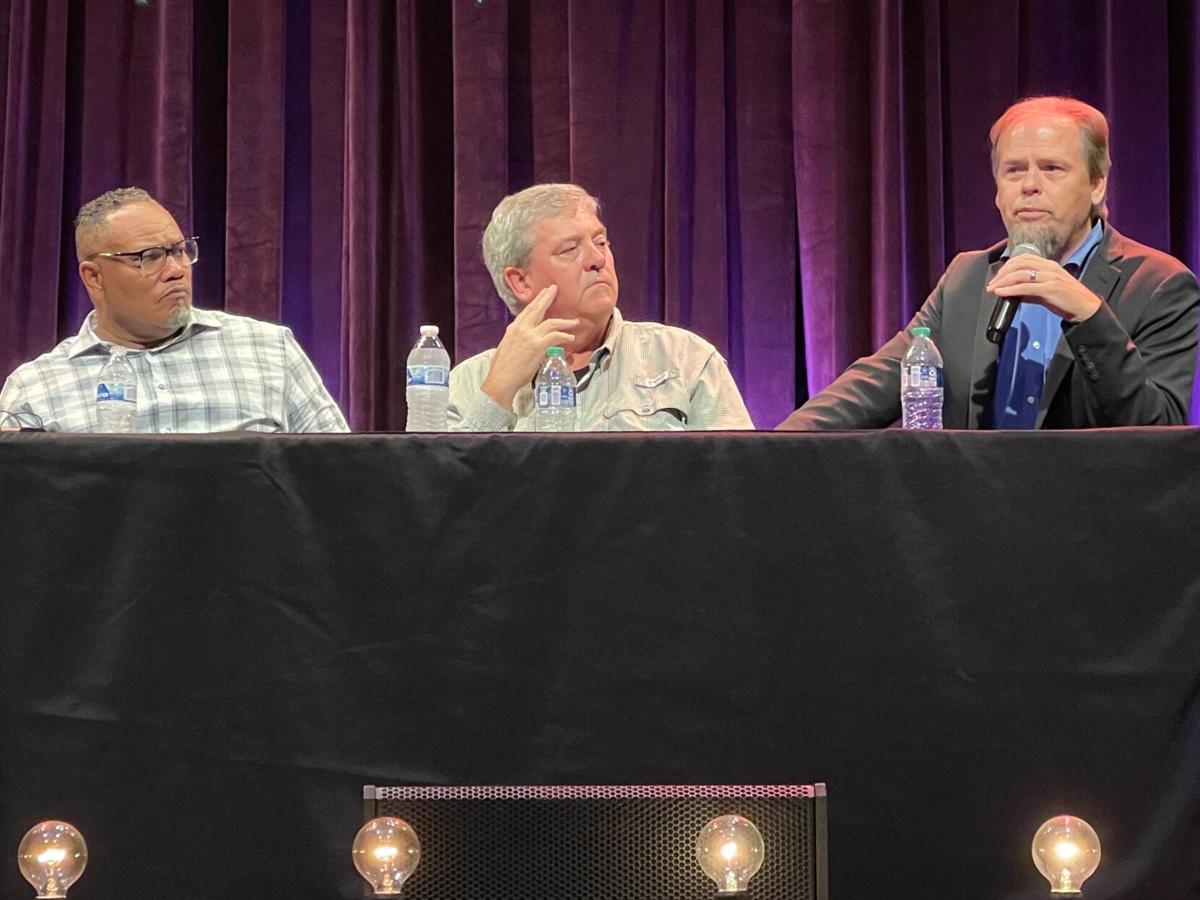 Through a countdown from five, a crowd of hundreds witnessed the unveiling and dedication of the bronze statue of the United States Colored Troops soldier Saturday in front of the Historic Courthouse.

City of Franklin officials joined with the four individuals who created what has become known as the Fuller Story and the sculptor who created the life-size statue to speak to the importance of the day. It was, in one sense, a culmination of the efforts over the past four years to better tell the complete history of the Franklin town square, and especially the stories of enslaved Africans and African Americans before, during and after the Civil War.

The final aspect of the plan involved installing a statue of a USCT soldier in a place of prominence and nobility on the city’s square. It’s one of only five or six such statues standing, and the first in a public location.

Speakers championed the monumental event, but also recognized the need to continue to recognize a common humanity for the generations ahead.

“This is not the end of the story,” Franklin Mayor Ken Moore said as he led off the program. “This is a continuation to tell all of the stories that make Franklin a unique community and also be recognized as a leader among the cities across our country. There is not a single avenue. This is one avenue to get where we need to be.”

In addition to Moore, six other speakers stood at the podium and told of what the statue unveiling meant for the city, for the ongoing reach for equality and, in some cases, for the speaker personally. Here, in order of speakers’ appearance at the event, are excerpts.

“The telling of the Fuller Story is a platform to not only understand where we’ve been but the power and possibilities of our future. Nearly 160 years ago, men entered this building as slaves and exited as soldiers. These men became freedom fighters for themselves, for their race and for our nation, so we could more fully strive to live up to our country’s founding ideals of freedom, liberty, equality and justice for all.

“My prayer is that we, as citizens of this community, continue to thrive, to hear and to honor one another, to recognize our common humanity and our shared story. When we do this we better love our neighbor, and by telling the Fuller Story we more fully build a community that cares for and about each other. And that is truly, truly the best place in America for people of all backgrounds and experiences to call home.”

“[The USCT soldier’s] sons and grandsons would serve in the Spanish-American War and World War I and World War II in segregated units. Those were the men who came home from that great war and pushed the envelope to being the modern civil rights movement. They live in all of us. There was resistance, but the resistance is crumbling. This crowd is proof of that. …

“America has always been its richest when it is its broadest and most honest and, dare I say, more inclusive. Franklin has led the way in many efforts. I think this is Franklin’s proudest day and proudest achievement.”

“There are really three phases to the Fuller Story — impossible, possible, done. But really we’re not done. This part [the statue unveiling] is done, but there are still social issues in our community that have to be addressed. So we’re still marching toward freedom. And as long as there is one child that is left behind in our schools, there is still marching to do. In our city, as long as there is one family who has to sleep in their car in one of our parks, there is marching to do. When there are people that work in our city but cannot afford to live in our city, there is marching to do. Today we celebrate, but tomorrow we continue our march to freedom, equality, liberty and justice for all.”

“It’s a brand new day. This statue tells us today that things are not changing, they have already changed.

“There’s a passage in scripture where the Bible talks about where we’re on a wheel and God is pedaling the wheel, and when we come off the wheel we’re going to be a brand new vessel because God is changing us. And I want you to know that Franklin now has been changed.”

“I know that I was chosen to do this piece. I didn’t look for it, it found me. My name, Joe Frank Howard, I went to Franklin Elementary School [in Ohio], I was raised in Franklin County and I’ve come back to Franklin, Tennessee — full circle.

"It’s such an honor for me to have had the opportunity to create this piece. It was an emotional piece because of knowing what it stands for. And artists, we work from our inside to our out. It’s what’s inside that comes to our hands.”

The Fuller Story initiative began in August 2017 after a white nationalist protest rally in Charlottesville, Va., erupted into violence over the removal of a Robert E. Lee monument. Back in Franklin, two Black men (Sawyers and Williamson) and two white men (Riggs and Jacobson) decided to work together along with the city’s mayor and administrators in an effort to provide proactive solutions surrounding the controversy of Confederate monuments.

A plan arose that would focus on education and representation. In October 2019, five historic markers were installed around the city square, telling more of the complete story of all lives during the Civil War era.

The weekend began with a program Thursday night at the Franklin Theatre, featuring the four founders of the Fuller Story as well as the sculptor, Howard. Titled “Telling the Story of the Fuller Story,” the five men shared their experiences during their journey in the cause. They went considerably behind the scenes as they took questions from a moderator and from the live and virtual audiences.

The night before the unveiling, supporters gathered at the Factory at Franklin for “An Elegant Evening with the Fuller Story: Celebrating the Historic Installation of the USCT Soldier Statue." The evening included dinner, music, dancing and the presentation of the USCT Humanitarian Award.

Saturday’s unveiling ceremony and Thursday’s program at Franklin Theatre can both be viewed through the city of Franklin Facebook page.

Photos: An Elegant Evening with The Fuller Story at The Factory