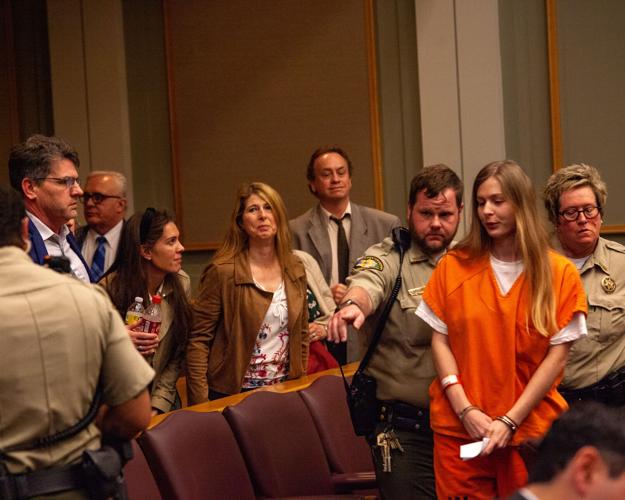 The family of Ashley Kroese watch as she is removed from the courtroom after she was sentenced to eight years in prison for the 2020 DUI crash that killed BPD Officer Destin Legieza. 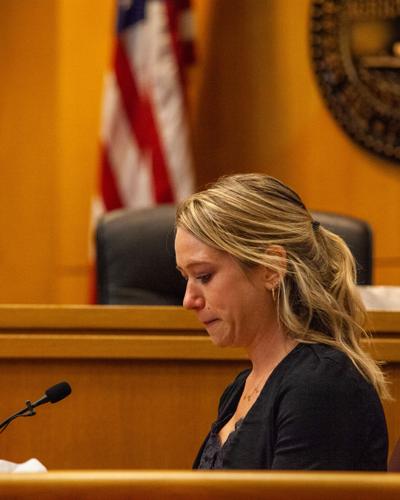 Heather Legieza, the widow of fallen BPD Officer Destin Legieza, gives a victim-impact statement during the sentencing hearing for Ashley Kroese on March 30, 2022. 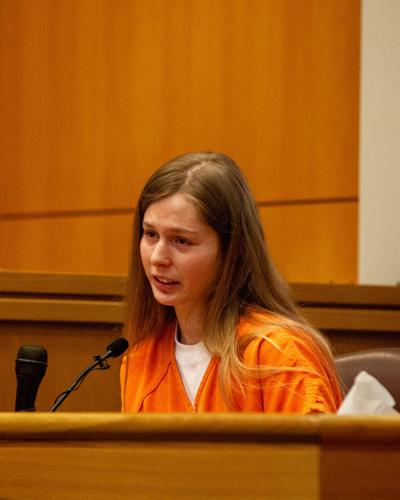 Ashley Kroese addresses the court and the Legieza family during her sentencing hearing on March 30, 2022. 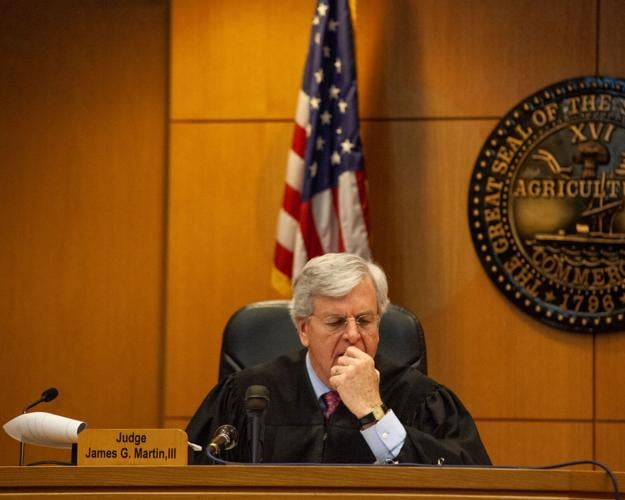 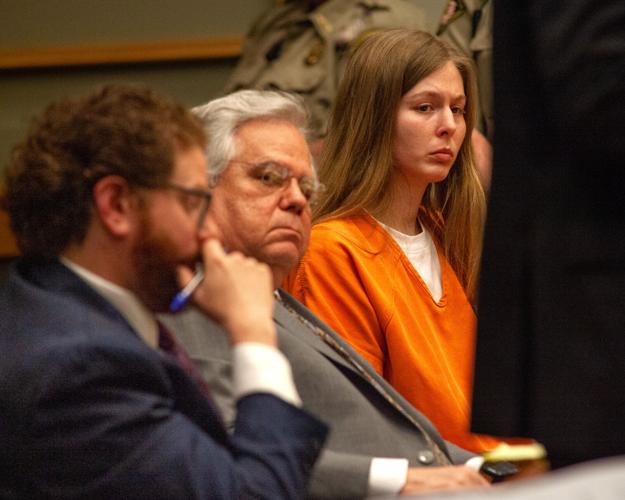 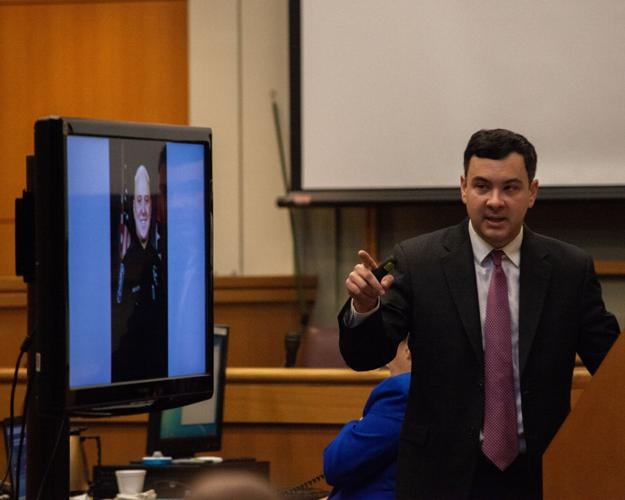 Prosecutor Carlin Hess shows the jury a photo of fallen BPD Officer Destin Legieza during the state's closing arguments in the February 2022 trial for Ashley Kroese.

Ashley Kroese was sentenced to eight years in prison for causing the 2020 death of Brentwood Police Officer Destin Legieza in a DUI crash.

She was sentenced as a range one offender, having no other criminal history, to serve her sentence with a release eligibility at 30%. She will also see her drivers license suspended for five years.

The case and subsequent trial drew widespread attention across the state, and Legieza's memory has been honored across Middle Tennessee and the nation, including the renaming of the section of Franklin Road where he died as the “Officer Destin Legieza Memorial Highway.”

Those victim impact statements included details of Legieza's kind and loving nature, his dedication and service, his status as someone that was looked up to by his own parents, and how much he is missed by his loved ones.

Kroese appeared in court in handcuffs, orange jail scrubs and orange jail-issued foam shoes, quietly sobbing throughout the hearing as she was told directly from Legieza’s family how she has impacted their lives.

Kroese's attention was given to each witness, only looking down a few times to wipe tears from her eyes, her face hidden behind her long brown hair.

“For me, Destin was the glue that held us all together," Finney said tearfully.

Legieza's father recalled seeing his son in the hospital, already dead from the injuries sustained in the head-on collision.

“I kissed Destin’s cold forehead wishing he would just wake up and come back to life,” Legieza’s father said. “I remember whispering in his ear that I was deeply sorry that his life had been taken, and that I loved him very much.”

“The one person I need to talk to about how I feel is no longer here,” Destin’s mother said, remembering the person that she said will always be her little boy.

“Every morning for about the first few seconds of waking up, I thought Destin was going to be there, then I would flip over and see an empty spot,” Legieza’s widow said. “I did this everyday. Every single day for a little over a year.”

“Ashley, you not only took Destin’s life, but a huge piece of mine.

“My last conversation with Desitn was about laundry detergent, drinks and diapers. I was picking up things we needed along with a present for his co-worker’s baby shower that weekend when he called,” Heather Legieza continued. “I ended up buying a family-sized laundry detergent and then I used it was the last load of laundry I’d ever do for him, and that family-sized bottle lasted forever because it was meant to be for more than just one. I don’t even remember if I said, ‘I love you,” at the end of our call.

"He didn't know how to use a laundry basket, the floor worked just fine," she said with a sad fondness for his character. "Months after he died I found a dirty sock hidden under the couch. That was my first time crying over a sock."

Along with that testimony, the court saw a photo slideshow of Legieza’s life, beginning with images of him as a baby and progressing through his life, photos of him with his little brother, cuddling with a dog on the floor, sporting a Tennessee Titans jersey, and in uniform as a police officer and as a child clearly with a dream of his future career.

No words were spoken, only tears and sniffles could be heard throughout the darkened courtroom whose gallery was full of dozens of supporters of the Legiezas as well as a handful of supporters of Kroese.

Kroese stared at the slideshow, her attention fixed.

Kroese, who was silent throughout her trial, took the stand at the end of the hearing where she apologized to Legieza’s family and friends, publicly speaking candidly for the first time about the incident.

“There's not a moment that goes by that I don't think of Destin Legieza," Kroese said. "The sentence, whatever it may be, I know it's not going to sound like a lot to you, and I understand that and you've said it, but please believe me when I tell you that my life will not be the same either after that."

"I accept the jury's decision and I sincerely hope that the Legieza family can find some kind of peace from the verdict," Kroese said. "I would have prefered to apologize to the family in a more private way, but I do understand that it's not two families that were affected that night, it's the whole community.

"You lost him for life and I'm going to have to live with this every single day...I'm so sorry. Thank you for taking the time to listen."

Both the prosecution and defense gave brief closing statements, with defense attorney Joshua Brand noting that Kroese's willingness to have the case be heard by a jury versus accepting a plea deal was his client's Constitutional right.

Kroese's reserved demeanor and silence throughout the criminal proceedings was often characterized by the public, especially online throughout the livestreamed trial, as being unremorseful or dismissive of the seriousness of the crime, with some of Legieza's family members and friends chastising Kroese for, in some of their views, drawing out the emotional legal process.

"I am also aware that I can seem cold," Kroese said. "I am anything but cold. I am devastated by what happened."

Kroese's aunt also took the stand on Wednesday and testified that Kroese was very emotional about the situation but did not show that publicly, calling her French-born niece "the kind of person every woman would want to be" who "cares about everybody," touting her as a driven and responsible child and young adult.

"This is her life too," her aunt told Judge James G. Martin III through tears.

90 letters were written in support of Kroese, one of which was read aloud by defense attorney Lee Ofman.

The character-letter written by a family friend said that Kroese's French upbringing has played a part in her reserved public image.

Prior to Kroese's statements, her attorneys played a short video character letter by a Franklin woman who said she met Kroese after the 2020 crash, calling her "sweet," "loyal," a "good friend" and "hard worker" who is "hopeful."

Kroese's attorneys also played a slideshow of photos and videos of Kroese at that were provided by her family, similar to the one played minutes before showing moments of Legieza's life.

This montage opened with a portrait of Kroese followed by a short video of her playing guitar and a slideshow of photos of her growing up from a baby to an adult. It included family photos and images of her restoring furniture, ending with a video of Kroese playing guitar and singing Elton John's "Your Song."

Legieza's father walked out during this presentation and many people in the court's gallery had looks of confusion and irritation on their faces while Kroese's mother quietly sobbed.

"Everyday when I come to work, I pray that I'll have the wisdom to do my job," Judge Martin said. "And on days like this, I'm not sure that I have enough, because the question becomes, how do you promote justice in a case of this tragic nature?"

"Ms. Kroese is a bright lady," Judge Martin said. "She's extremely well-educated and she has now lost her freedom by virtue of very poor decisions that she made on the evening of June 17 and the morning of June 18, 2020.

"When I look at the criminal conduct involved, I agree, she did not intend to kill somebody, but she did intend to drive under circumstances when she had absolutely no ability to drive...She was intoxicated over two times the legal limit when she was tested. If there had been some retrograde analysis, it may have been an even higher level blood-alcohol content.

"Similarly, this tragic case, and it's tragic in the court's mind from every perspective, caused Destin Legieza to lose his life, caused his family to lose their son, their brother their husband...[This] caused the Brentwood community to lose a dedicated officer, who did more than just patrol and write tickets. He greeted people. He welcomed people into his community, and he was an ambassador for the City of Brentwood."

Following the hearing, BPD Chief Richard Hickey issued a statement on the sentencing which can be read in full below.

"We are disappointed with the eight year sentence," the statement reads. "An eight-year sentence in reality means that Ashley Kroese will spend about two-and-a-half years in jail. Our disappointment is not with Judge Martin or the District Attorney’s Office, but with the sentencing guidelines and structure that allow for such a lenient sentence on such a preventable crime. We realize that no amount of jail time will bring Destin back to his family or us, but how killing someone, in this case a police officer, is only worth two-and-a-half years in jail doesn’t quite seem equitable."

Both the prosecution and defense declined the opportunity to issue any statements following the hearing, with the DA's office having previously spoken about the case following last month's trial.

And while the criminal proceedings have now concluded, multiple families across Williamson County and across the world have been forever changed by a situation that has most commonly and likely most accurately deemed a tragedy.

"Had Officer Legieza and Ms. Kroese had known each other in life, I suspect they would have enjoyed each other as individuals," Judge Martin said. "And the way that they have come to know one another is tragic."