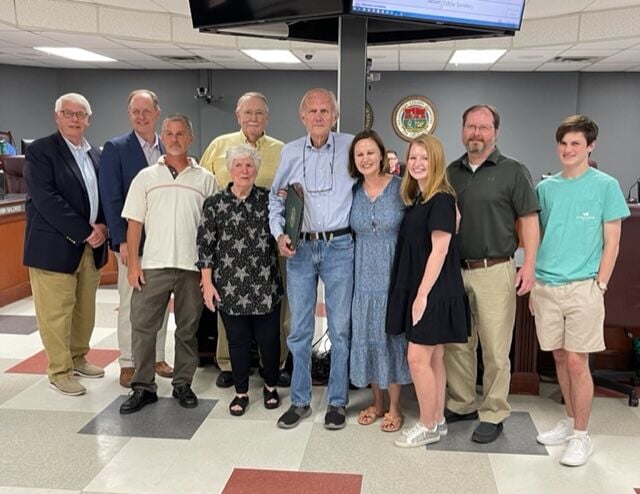 John Lackey (center, in blue shirt) is with his wife, Beverly, and other family members, along with Mayor Rogers Anderson (far left), Sen. Jack Johnson and Robert Ring (in yellow shirt). 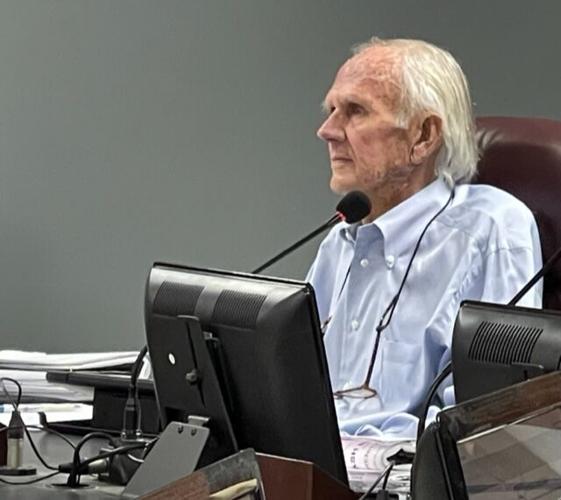 Before the Williamson County Regional Planning Commission got underway with its main agenda Thursday evening, members, staff and others took time to honor John Lackey for his years of service as chairman of the commission.

And though his expression held firm as his wife, Beverly, and children and grandchildren entered the auditorium at the Williamson County Administrative Complex, Lackey seemed to realize a surprise had been in the works.

“Now I know why Beverly told me to put a clean shirt on,” Lackey jokingly said.

Lackey, who joined the Planning Commission in June 1983 after then County Executive Robert Ring nominated him, took over as chair in 1985 and held that position until stepping down Jan. 13 this year. Sammie McCoy took over as chairman, and Lackey will remain on the commission through the end of his term.

“Words can’t possibly express our feeling for what you’ve done for Williamson County as chairman of this commission,” Ring said. “I’m at a loss to say how important your job had been and what you had done for this county.”

State Sen. Jack Johnson read a proclamation in honor of Lackey that was signed by Gov. Bill Lee, and Beverly Lackey was presented a bouquet of flowers

“We owe a great deal of appreciation to Beverly for sharing her husband with us for these late-night hours and all the things he has done,” County Mayor Rogers Anderson said. … “Even more so, we got him out of your hair.”

As chairman of the Planning Commission for some 36 years, Lackey put his stamp on much of the progress made in Williamson County in that time. It has transitioned from a sleepy, largely rural county of approximately 63,000 people to a premier center estimated population of 256,000.

Lackey provided unparalleled leadership in the development of four comprehensive land use plans, four zoning ordinance updates and numerous other planning efforts. Notably, he sought to help preserve the rural character of Williamson County while seeking to share the heritage of his county to the many people choosing to make Williamson County their home.

Professionally, Lackey served as engineering consultant from 1970-80, designing a number sewage treatment plants in the region, including two plants in Williamson that are still in service. He later made the successful transition to a builder of custom homes in Brentwood and elsewhere in Williamson County.

In addition to giving his time on the Planning Commission, Lackey served with a variety of entities such as Williamson County Water and Wastewater Authority, Middle Tennessee Homebuilders, Habitat for Humanity and the Parade of Homes.