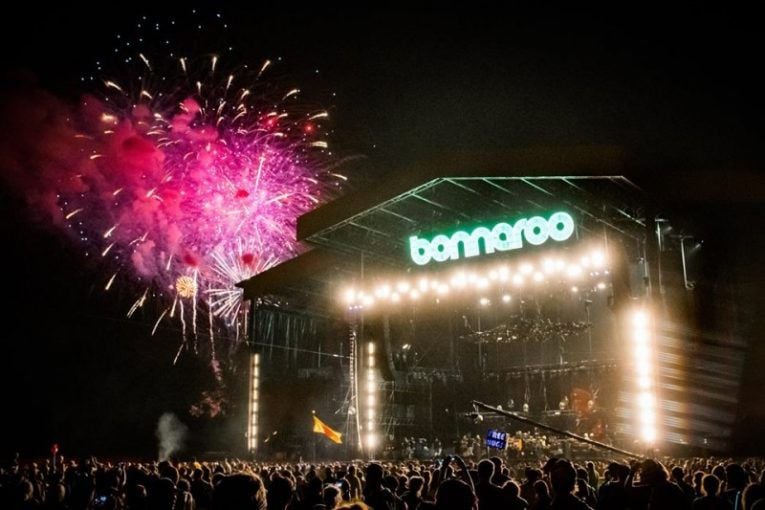 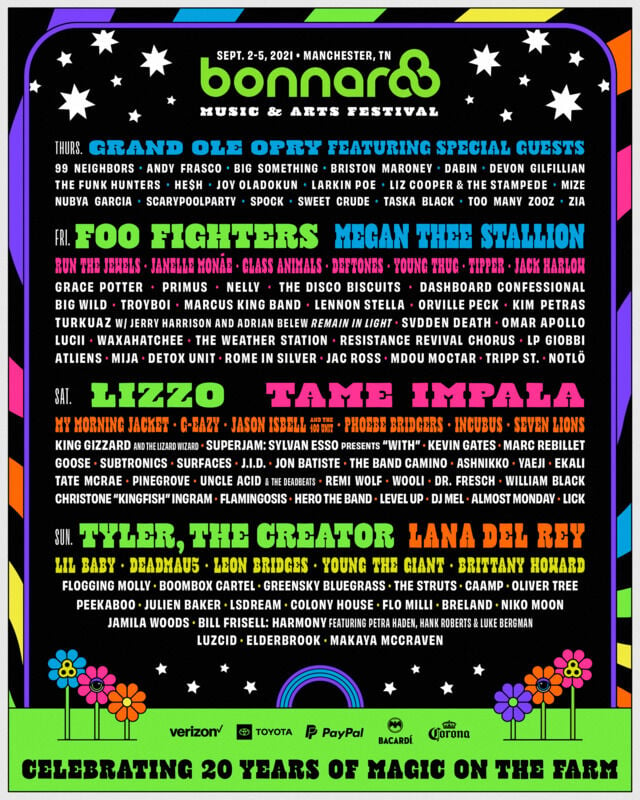 One of many disappointments for music fans as the COVID-19 pandemic began to unfold was the cancellation of Bonnaroo 2020, which boasted one of its strongest lineups ever.

The lineup has been announced for the 2021 event, billed as a 20th anniversary celebration and scheduled for Labor Day Weekend, Sept. 2-5. It features many of the same top-notch acts who were to play the fest that didn’t happen.

The roster is diverse and exciting up and down the bill, making it hard to really define where the “top” of the lineup ends and the undercard begins. Among many more, you’ll have a chance to see: Lizzo, Tame Impala, Foo Fighters, Megan Thee Stallion, a Grand Ole Opry showcase, Run the Jewels, Brittany Howard, Jason Isbell and the 400 Unit, Joy Oladokun, Julien Baker, Phoebe Bridgers, Lana Del Rey, Orville Peck, a Superjam led by Sylvan Esso, J.I.D, Janelle Monáe, Mdou Moctar, Jamila Woods, Flo Milli, Breland, Makaya McCraven, Bill Frisell, My Morning Jacket and Tyler, the Creator. Check out the full lineup broken down by day below. Weekend passes start at $329 and go on sale at noon central via the Bonnaroo website.

Some festivals like CMA Fest and Big Ears have pushed their next iterations to 2022, while pod-based in-person shows, like the upcoming Concerts on the Farm series at the renamed Bonnaroo Farm in Manchester, have been scheduled throughout spring and summer. While several fests have dates on the books nearer the end of the season in 2021, few have announced lineups or put tickets on sale — one notable exception in our area being the Christian music fest Lifest.

While there’s no mention of specific COVID-19 precautions, Bonnaroo’s release notes that it’ll be important to watch for updates:

"Bonnaroo organizers as always will be in regular communication with local health and public safety officials and will continue to abide by relevant recommendations. As it approaches, Bonnaroovians will receive regular updates with the important information needed to plan their trip to The Farm, including any changes to policies and procedures they’ll need to know before entering the festival and campgrounds. Updates will be shared at www.bonnaroo.com, through Bonnaroo’s social media channels, and via the Bonnaroo email list."

Check out the complete lineup, broken down by day.

Liz Cooper and the Stampede

Jason Isbell and the 400 Unit

King Gizzard and the Lizard Wizard

Uncle Acid and the Deadbeats

This story first ran in our partner publication the Nashville Scene.