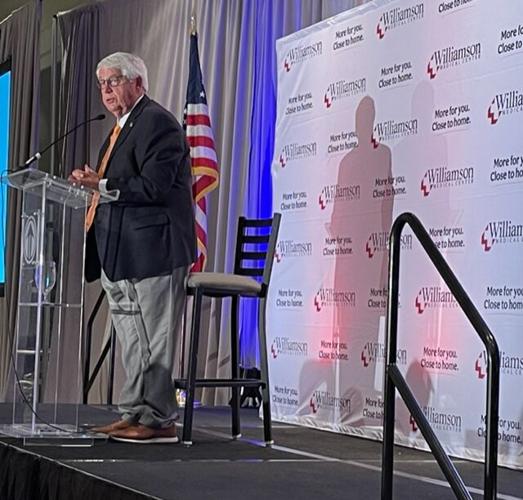 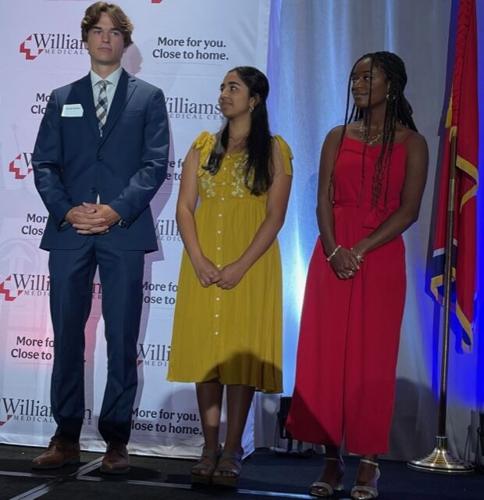 Three students were recognized by Leadership Brentwood and Leadership Franklin during the State of the County luncheon. From left are Brooks Brown, a graduate of Brentwood Academy who will be attending UT-Knoxville; Sia Kripalani, a Ravenwood High grad who will going to Emery University; and Chandler Bell, a Frankin High grad who is enrolling at Lipscomb.

Three students were recognized by Leadership Brentwood and Leadership Franklin during the State of the County luncheon. From left are Brooks Brown, a graduate of Brentwood Academy who will be attending UT-Knoxville; Sia Kripalani, a Ravenwood High grad who will going to Emery University; and Chandler Bell, a Frankin High grad who is enrolling at Lipscomb.

Standing before a crowd of government officials, chamber of commerce members and business leaders, Williamson County Mayor Rogers Anderson said, in effect, that boxes are being checked.

He was delivering his annual State of the County address during a Williamson Inc. luncheon Tuesday at the Franklin Marriott Cool Springs, and used the opportunity to point out the accomplishments and the challenges the county has undergone over the past year. Toward the conclusion of his address, Anderson said Williamson County is doing what is necessary to attract new companies and jobs to the region.

“It’s always about quality education in our community, and it has been for 30 some-odd years,” Anderson said. “There are other factors such as top-notch law enforcement, public safety, parks and recreation. These are the key components when businesses look at you to move into your community.”

The quality of public education in Williamson County is at the forefront of what makes the area so attractive, Anderson said. Even before the mayor had taken the stage, Williamson Inc. President and CEO Matt Largen took time to give a nod to teachers in the county and throughout the state.

"I’m sure that just about everyone in here can think of a teacher they had who made such an impact on their lives,” Largen said.

Anderson led off his address by praising the work of Williamson County Schools.

“It’s no secret that Williamson County has one of the best public education systems in our nation,” he said. “This happens because there are approximately 2,900 teachers and another 2,300 support staff who have chosen a career in education. They have made a solid decision to devote their time to helping our youth become future leaders.

Anderson also touched on the importance of law enforcement and the need to retain employees of the Sheriff’s department.

“Working with an outside consultant, we’ve identified areas in the sheriff’s office, the jail and the emergency communications center that needed to be worked on to be able to keep these people," Anderson said. "Sheriff [Dusty] Rhoades and his staff work 24/7, 365, to ensure that our residents have and receive outstanding law enforcement responses. It’s important to retain our quality personnel.”

Anderson addressed the county budget for the 2022-23 fiscal year, and used slides to get in deeper on some of the numbers. Perhaps most telling for how Williamson County has grown jobwise over the years was the number 14.1. That’s the growth percentage of jobs added in the county from 2016 to 2021, an increase of some 20,000 new jobs.

“You’ve heard me say before and it bears repeating: Government does not create jobs,” Anderson said. “However, government can provide the environment for attracting jobs.”

Anderson did point out the ongoing efforts of getting broadband internet access to the rural areas of the county, and he also spoke of those many Williamson residents who are still living on the margin in spite of the county’s overall wealth.

“Although we have a lot of financial strength, there are many people … who are still struggling to make ends reach for various reasons,” the mayor said. “I want to encourage all of us to reach out to our neighbors, our friends, our coworkers who may need our help.”

WC-TV will have the video available from the State of the County in the coming days.