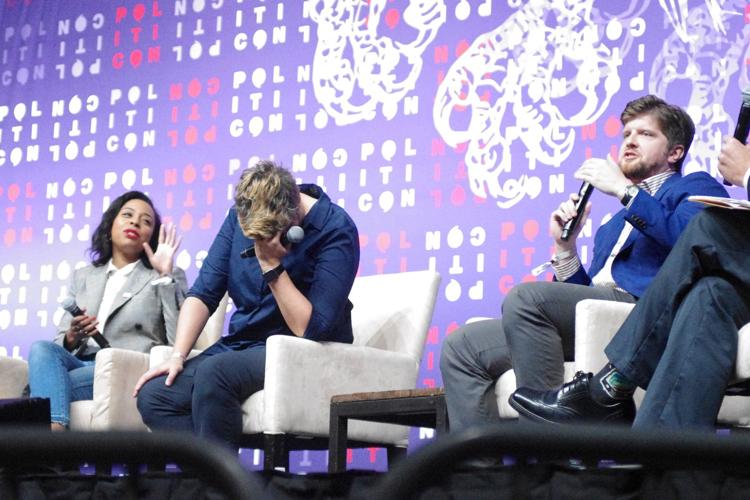 Liberal political commentator Sally Kohn (second from left) holds her head in her hand during a fierce back and forth with conservative radio host Buck Sexton (right). 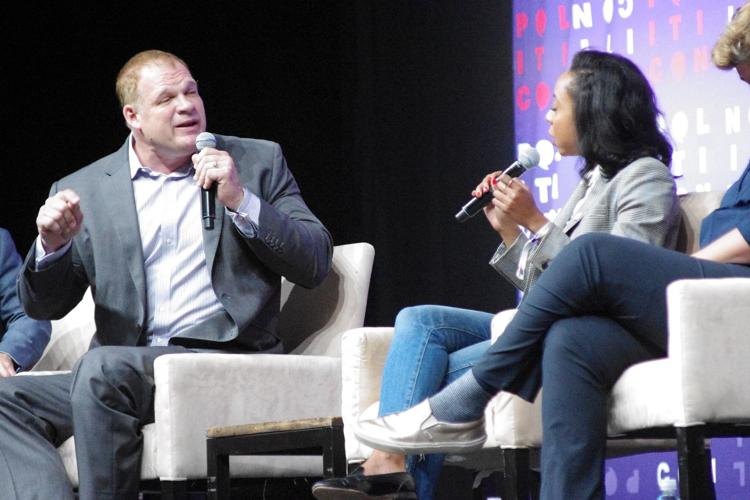 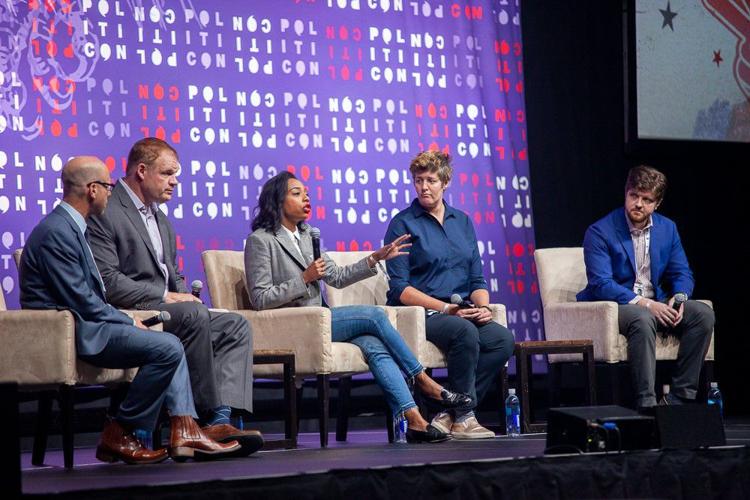 Medicare for All is among one of the most highly discussed topics in America today, and has been fiercely debated during the ongoing Democratic debates. One local venue that saw the topic discussed and debated upon recently was Politicon in Nashville - called the "Comic-Con for politics," Saturday saw the likes of five well-known personalities debate the feasibility of Medicare for All, often heatedly so.

What is Medicare for All?

Strongly supported by 2020 presidential candidates Bernie Sanders and Elizabeth Warren, the proposal of Medicare for All would provide healthcare coverage to every American, as well as see the elimination of out-of-pocket costs such as copays and deductibles. Supporters point out that the U.S. already pays far more per person on healthcare than any other country, spending $3.5 trillion in 2017 - $1.5 trillion of which was financed by the federal government to support program like Medicaid and Medicare. Opponents to the proposal argue that the estimated cost of around $30 trillion over a ten-year period isn't feasible, and that completely removing government from the healthcare industry would be more efficient in cutting costs to consumers.

"Now, the question is, who is paying for what," said Gray. "In our current system, there are enormous costs that are being incurred by hospitals by people who cannot pay their bills. Emergency care, which this country has decided is its stopgap measure for our health care. Sometimes you'll hear people on the other side of the aisle - or even sometimes my side of the aisle - say things like, ‘well, we do have a Medicare For All in this country, everyone can get health care, you just go and get medical emergency care.’ But that care is enormously more expensive because it's people who have waited to the last minute whose medical problems are much more [serious] than they would have been had they had a persistent care."

"Additionally, we have hospital closures all around this country - not because of anything the government is doing, but because of states that have failed to expand Medicaid. We have folks that are getting reimbursed at Medicaid rates which are lower than Medicare rates. So the question becomes what is the most efficient way to pay for healthcare? The answer to that is, and has always been, a single-payer system."

"Oh, there are certainly some problems [with our current healthcare system], and the problems [are] already having a socialized system to a great extent, more so than the rest of the world," Jacobs said. "You look at the Swiss model, and the Swiss model is actually [a] much more free-market model than the U.S. is, and we're supposed to be the bastion of free-market economics. We do not have a price system within our medical system; there's no competition, there's no responsibility for the consumer - it's all third-party. Those are the issues, and anything that we can do to move toward free-market reforms, it's going to drive the cost down and the quality up."

"So really, we've framed the question inappropriately. It's not whether we're going to have a socialized system, it's whether what we have now is a free-market system, and it's not. We can talk about this utopian idea of the government can pay for everything. Well, that's great, but first of all, can [the government pay for everything]? Someone has to pay for it. I think it's important politically [that] we look and say, 'what is the role of government in our lives? Is it to take care of us from cradle to grave, limiting our choices and our ability to act, or is it to protect our rights as individuals, and to encourage freedom of action and freedom of choice? I would say it's the ladder, and anything that we do to grow government actually restricts that."

"Medicare for All is a magic chocolate cake that you can eat endless amounts of, never runs out, and will not make you gain a pound," Sexton said. "It simply doesn't work. The cost estimates are - on the low end - $30 trillion. We just can't do it, we can't afford it."

"I for one think that the insurance companies have spent too long profiting off [of] our sickness," John said. "We pay more as a country for insurance and for medical care for worse and worse outcomes. The incentive structures are all wrong, and meanwhile we actually see good outcomes under systems like Medicare."

"So I think that the moral case that's being made, for we should cover everybody, it's compelling," Sexton responded. "One, 90 percent of the country already has health insurance. Of the 90 percent of people who have health insurance, a vast majority of them actually like their health insurance. If you remember, the Obama administration had to promise people you won't lose your plan - that was a lie. Why did they have to tell that lie? Because there are a lot of people who liked their plans, who lost their plans because the government came in and said we've got a better way for you."

"The reason you're hearing Joe Biden say that he's not in on Medicare for All, he's actually talking about having a public option and having competition around the public option, which is akin to what they do in Singapore and Switzerland, where you do have universal coverage, but the market is actually setting prices. That brings costs down."

"So Buck Sexton, are you saying you would support the public option," John asked. "You just sounded like you were down with it."

"The public option is a serious proposal that could be workable under certain circumstances," Sexton answered.

"The data that I have basically says that if it was entirely a free-market system, the people who get screwed by that are the people at the lowest end of the socioeconomic system," Metzl chimed in.

"That's why you have private charities and other organizations that help in that respect," Sexton responded.

"There should be no market - ability to pay shouldn't come into play when you're facing an illness that could kill you," Gray said. "That's why I don't believe there should be profits [involved.]"

"Mayor, Buck, all I ever hear from the other side of this debate is, 'bad, bad, bad,' and 'let's get rid of ObamaCare,'" John said. "We're debating how to we fix [our current healthcare system] and expand care for more people, whereas all I keep hearing is attacks on those solutions and no other idea."

"Because we've been talking to you over time to frame it correctly, which hasn't been done," Jacobs answered. "We could look at things like healthcare savings accounts, we could look at allowing competition between insurance companies by buying between state lines, we could look at better tax incentives, we could encourage people to take better care of themselves... which is not going to happen under this system either because if people are just paying bills, why should you take care of yourself? There's a number of things that we can do, but we don't because we just get caught up in Medicare for All instead of actually looking at market reforms."