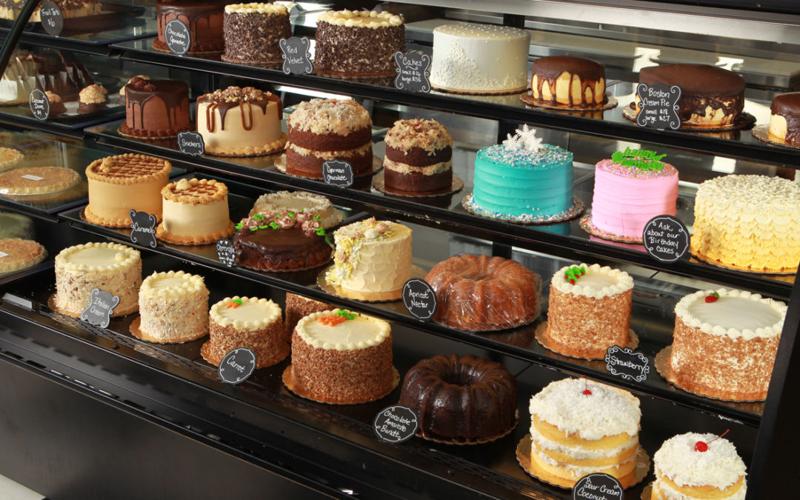 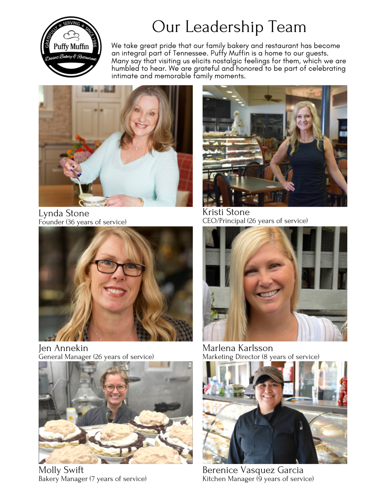 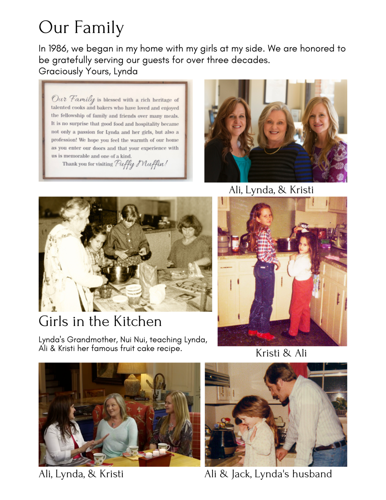 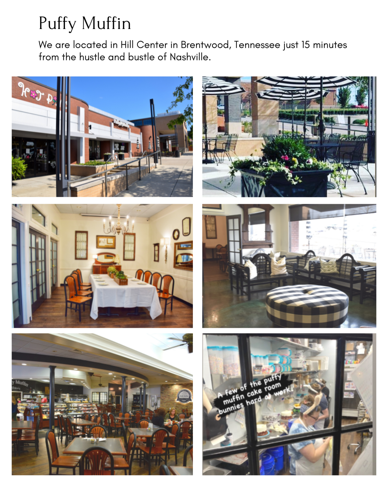 The beloved Brentwood restaurant and bakery Puffy Muffin started in a family’s kitchen.

After over 30 years in business, the longstanding Brentwood staple still operates with that same connectedness in mind.

In 1986, Lynda Stone started selling just one item, her famous sourdough rolls, out of her home. She never could have known how that one bakery item would catapult her into having the beloved restaurant that so many know and love today.

Her daughter and current CEO and Principal of Puffy Muffin, Kristi Stone, said that friends and family constantly raved about the rolls.

“They loved them so much, they were like you need to sell these," Kristi Stone said.

So that’s what Lynda Stone did.

Within a couple of years after seeing marked growth, Lynda Stone moved the business into Huff’s Food Town, a local grocery store that was once located off of Wilson Pike Circle. The owner of Huff’s, Glenn Huff, approached Stone and asked if she would like to run his bakery section. Stone agreed with one condition: that she be able to keep the name Puffy Muffin on all of her baked goods.

Soon, the business would outgrow Huff’s and Lynda Stone saw herself moving into the space next door to open a full restaurant. Kristi Stone said it operated as a tea room at first with a limited menu including some items that customers still know and love today, including the chicken salad, quiche, baked potato soup and ginger tea.

In 1990, Puffy Muffin moved into the Hill Center Brentwood where it still operates today.

One of the aspects of the restaurant that Kristi Stone said has made it as successful as it is today is listening to what customers want. Her sister, Ali Burns, started the cake department about 25 years ago after a customer walked in asking if they could make a wedding cake. She saw an opportunity, got the cake made and turned it into a new branch of the business.

A lot of Puffy Muffin’s evolution came from people in the community asking if the restaurant could provide a specific service and the restaurant growing to meet those needs.

Over the years, the restaurant brushed shoulders with notable faces, ranging from catering an event for Elizabeth Dole when she was running for the Republican nomination in the 2000 presidential election to making a birthday cake for Elton John.

According to Kristi Stone, Puffy Muffin has always been centered around family, both her own and the families the restaurant is able to service.

So it is no surprise that in 2016 when her mother decided she wanted to take a step back and pursue retirement that Kristi Stone stepped in to become owner and run the business.

“There was a need for someone to take it into the future,” Kristi said. “I really wasn’t ready to let it go. I have strong ties to this place for so many reasons.”

She said that although they could have pursued selling, she knew that wasn’t the course she wanted to take. Keeping it in the family would ensure it would continue to be the place people have to come to know and love.

Although Kristi Stone is the owner of Puffy Muffin, both her mother and sister still own shares of the business. She said she still calls on her mother’s expertise at times, hiring her to do leadership training for all new managers and supervisors at the restaurant.

When speaking of the future, she said she sees the restaurant being around for a long time.

“It’s busier now than it’s ever been,” she said. “I don’t see us going away. I just see us continuing to grow and morph and change.”

While she plans to continue providing the service the community has come to expect, she said she wants to balance that with adapting to stay relevant, something that every successful business must do.

One way Puffy Muffin has achieved that was actually in response to COVID-19. When the restaurant had to temporarily close in 2020, Kristi and the staff were looking for ways to continue serving the community and to bring in revenue. That’s when they opened their outdoor market where customers could drive up and purchase baked goods and other Puffy Muffin favorites.

They have continued this market since and it will be open again this holiday season.

For Kristi, the most rewarding parts of running the business are connecting with people, changing their lives and having her life changed in return. This connection and cultivation of community extends to everyone who walks in the doors, customers and staff members alike.

She said one of her favorite parts of the job is getting to walk from table to table, visiting with long-time customers and hearing the stories of new customers who are there for the first time. She said there is rarely a day where she looks around the restaurant and doesn’t see several familiar faces. However, with all of the new folks moving to the area, she sees new faces every day as well.

With regards to the staff, she said being generous and giving back to them is one of the most important parts of her job. Puffy Muffin currently employs about 125 people with about 75 full-time employees, many of whom have been with the business for years.

This idea is one of the reasons, apart from the delicious food, that has kept Puffy Muffin so successful for over 30 years.

To further the point of having a family mentality in the restaurant, each employee carries a card in their pocket every day with a list of core values that the company holds.

The last item on the list of core values is this: “A fond farewell with room for a sequel.”

“We want everyone to leave this place with have a good feeling," Kristi Stone said. "That they go, ‘I wanna go back here.’ We’re leaving room for another part of the story for you to come back.”