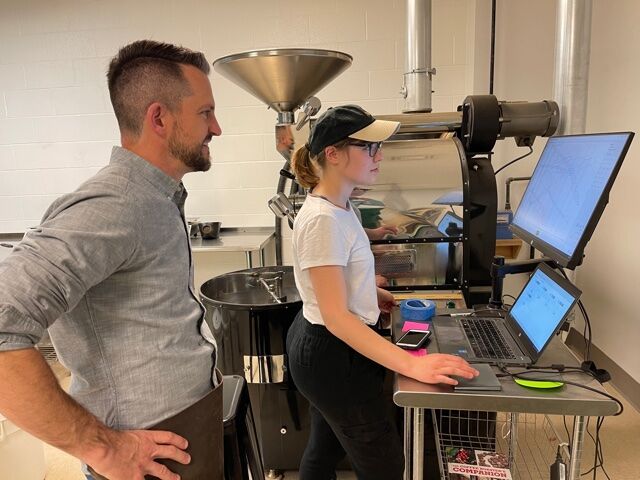 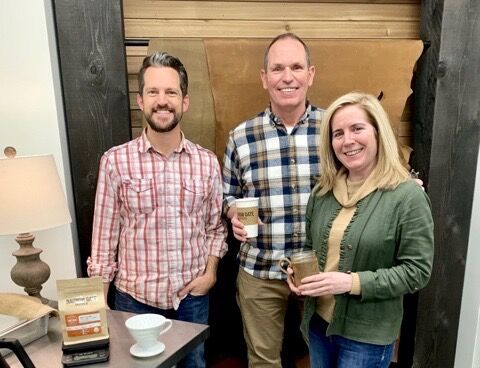 From left are Erin McAtee, Bill Spencer and Stacy Spencer.

Think of it as a process that’s similar to a wine tasting, only it involves raw coffee beans. And instead of folks gathering at, say, a scenic vineyard to sample the latest varietals and noting their flavor profiles, a cupping is more about the roots of making coffee in a completely unfiltered manner.

Erin McAtee has led plenty of cuppings. As head of what has recently been branded as Narrow Gate Coffee Co., he typically uses the process to gather feedback from coffee insiders on what characteristics are detected through smell and taste of freshly roasted coffee.

“This is not just an exercise for show,” McAtee explained during a cupping he recently held at the Narrow Gate building off Columbia Pike in Franklin. “This is actually a functional exercise that we do as a roaster. We use this process to uncover what’s actually going on in the coffee bean.

“Cupping allows us to taste some of those things that may not otherwise show up. It also reveals flaws very quickly. This is a handy mechanism for the roaster to bring together a group of people, elicit feedback and learn what’s good and what’s not good in a coffee just roasted.”

McAtee’s passion for coffee roasting came not long before he and his wife, Bethany McAtee, started E&B Coffee Roasters that grew from pop-up events to wholesale partnerships and ultimately the opening of a café in Nolensville. McAtee, who first learned the basic mechanics of coffee roasting by using an old air popper for popcorn, was more into the craftsmanship of making coffee than interacting with customers.

And that’s what eventually led him to the doors of the Narrow Gate Foundation, a ministry that helps give guidance to young men in their transformative years. The nonprofit also has a business side with the Narrow Gate Trading Co. and TN Box Beams, and that’s where McAtee thought he and Bethany would best fit.

Bill Spencer, founder of Narrow Gate, gave a presentation about his nonprofit one Sunday at Grace Chapel Church, where the McAtees also attended. Spencer’s message hit Erin like, well, a jolt of black coffee.

“On that day I had a thought that, wow, what if we were missing not having a purpose in the middle of what we were doing,” McAtee said. “What if we were all about just coffee quality and building a brand, but not about helping people, about investing in other people. I got really excited about the possibility of being a part of something like that.

“I was drawn to Narrow Gate,” McAtee continued. “It was more than just a direction change for me mentally. I think we were meant to be together and aligned with the craftsmanship that is deep in me already and the role craftsmanship plays here at Narrow Gate.”

Though a little skeptical at first of McAtee’s intention, Spencer soon recognized how heartfelt he was about becoming a part of Narrow Gate.

“When Erin said he wanted to be a part of it and had an idea, my first reaction [in similar situations] is to kind of hold people at a distance and see how hard they’re willing to push in,” said Spencer, who founded Narrow Gate with his wife, Stacy Spencer. “And I had never witnessed anybody try to push in as hard as Erin. He kept after it.

“And he and Bethany both know it’s not about the coffee, it’s about the people.”

Narrow Gate Coffee Co.'s fresh roasted coffee is served and sold in Franklin at Herban Market and in Nolensville at IttyBitty Donuts & Specialty Coffee and Birdie's Breakfast and Lunch Shop, as well as through other partners that include cafes, businesses and ministries. It may also be purchased directly from Narrow Gate Coffee Co.

Joining the McAtees at the Narrow Gate Coffee Co. were Ben Lyons, director of operations and barista, and Dani Hacker, assistant coffee roaster. Both Lyons and Hacker came from E&B Coffee Roasters.