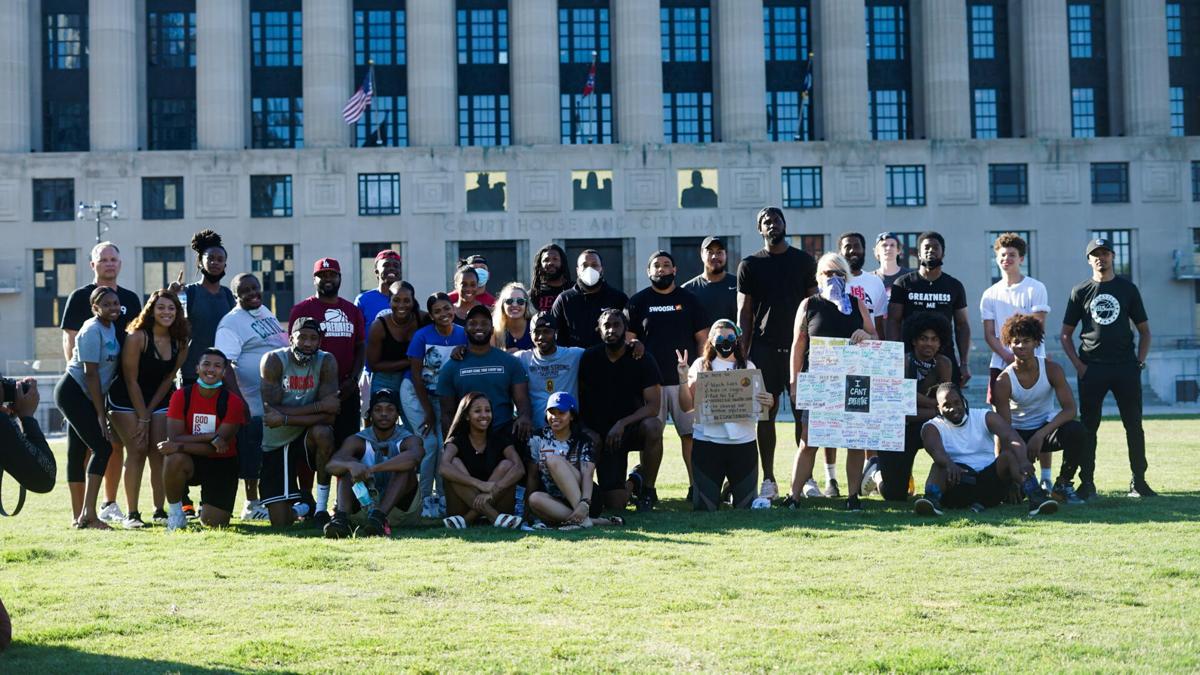 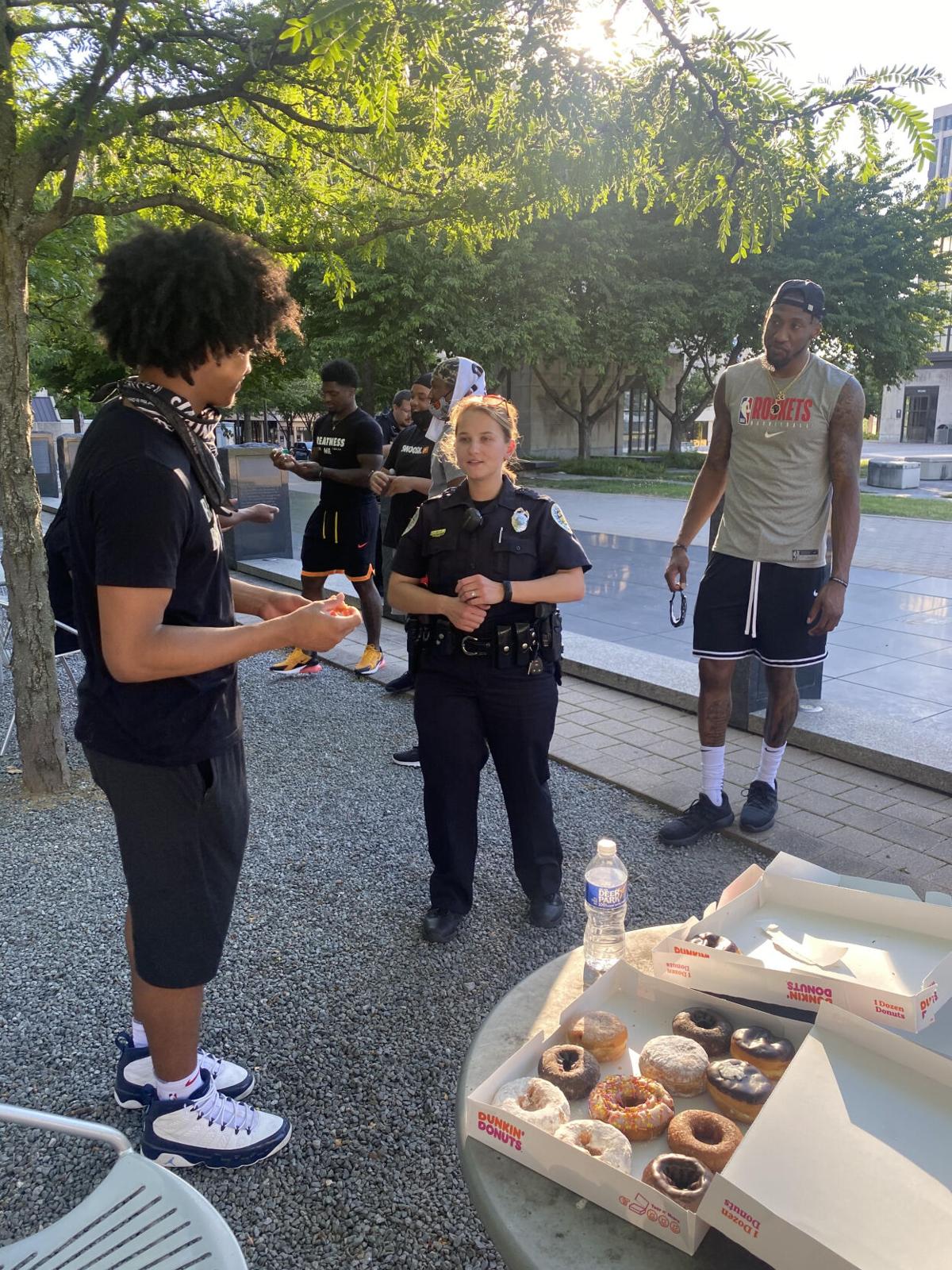 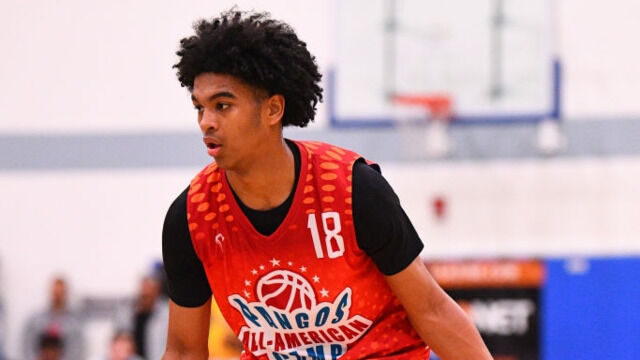 With everything that's gripping the United States right now, many are looking for ways to help, to act, to make a difference.

Clark, a five-star recruit and one of the top high school basketball players in the country for the class of 2022, organized a cleaning in downtown Nashville's Metro Courthouse Monday after rioters caused damage to the government building.

"The response was great," Clark said. "The [Metro Nashville Police Department] were supportive and even brought us donuts and water, random people who were out for a walk even joined in to help.

"People from different races were working together to help clean up the city, which made everyone happy and know that change will come."

The riots in downtown Nashville followed a rally and peaceful demonstration centered on the death of George Floyd. Floyd was killed by Minneapolis police officer Derek Chauvin on Memorial Day when Chauvin applied force to Floyd's neck with his knee for nearly 10 minutes, with Floyd distinctly crying out to Chauvin that he could not breathe.

Three other officers were present during the time Floyd was detained, and onlookers captured the sequence of events on video and called for Chauvin to release Floyd from the pressure. The video went viral and has sparked a national outrage, renewing activism on issues of police brutality and racism.

The Metro Courthouse saw significant damage late Saturday, including graffiti, a fire set inside one of its offices and a Civil Rights plaque destroyed.

Clark said he attended the Saturday demonstration, but left before things got out of hand.

"I went when it first started, when it was peaceful and left before all of the stuff happened," he said. "But what I took from it was you had a bunch of people who were supporting change in society."

He will be transferring from Heritage Christian School in California to Brentwood Academy, where he'll play out his junior and senior seasons.

A combo guard, he's garnered interest from some of the top hoops programs in the nation, including Kentucky, Kansas, Villanova, Tennessee, Michigan, Florida, Gonzaga and Auburn, among others, per 247 Sports.

The incoming Eagle said he felt called to respond, with Floyd's death speaking to him in a very exact way.

"Well most people don’t know that I’m actually from Minnesota," he said. "My mom was born and raised there and my dad played for the Minnesota Vikings, so what’s going on hit home.

"So I just told myself that it’s up to my generation to try to fix things and make things better, so it came upon me to try to help mend things and inject some positivity in what is going on."

That positivity came in the form of Monday's cleaning of the Metro Courthouse, a landmark site for Nashville's Civil Rights movement.

He took to social media — Clark has an Instagram following of roughly 220,000 and 3,705 followers on Twitter — to encourage people in the community to support his efforts.

"What stood out was everybody from different races out helping rebuild the city and getting along and just soaking up the moment and that told me that change can happen," Clark said of his organizing and participating in the cleaning.

To Clark, the events of the weekend and Monday reinforce two ideas.

"Biggest lesson learned is that we are in very fragile times and people want change around the country," he said.

He has used three words on social media in the time since Floyd's death and national demonstrations began, "peace," "love" and "unity." They're concepts Clark hopes will rally people together for change.

"Just love one another no matter what we are all brothers and sisters through Christ," he said.

Clark will be spending the last two seasons of his preps basketball career in Brentwood, a town he says he fits right into.

"The move to Brentwood has been amazing," he said. "It’s such an amazing town and everybody makes you feel welcome, plus the food here is amazing, too."

Clark could follow in the footsteps of Garland and fellow Brentwood Academy alum Brandan Wright to play in the NBA. Garland was taken fifth in the first round of the 2019 NBA Draft last June. Clark says Garland has been a big influence on him and his decision to transfer to BA.

"Just knowing Darius so well, he was very instrumental in that because we were moving to the Nashville area regardless but he let me know everything BA had to offer as a school and basketball program, plus the BA community is amazing," he said.

"I do look up to him and he’s just a great person and friend," Clark said of Garland. "He’s more like my big brother."

Brentwood Academy finished 18-7 last season (8-2 in region play) and made it to the state quarterfinals. It was the team's second season removed from Garland's graduation and one removed from losing Randy Brady and Marcus Fitzgerald to transfers.

In the fall, though, they'll add who 247 Sports says is the 18th-best player in the nation for the Class of 2022, one who didn't wait long to make an impact on the community.

Clark's efforts won't stop there, as he's already in the midst of organizing a prayer vigil for June 10, location and time not yet disclosed.

"With everything that’s going on with the current situation and COVID-19, I just felt like the nation needs to be prayed upon so I just want to get people together and pray for healing within our nation," he said. "My faith in God is everything to me. It guides me daily."