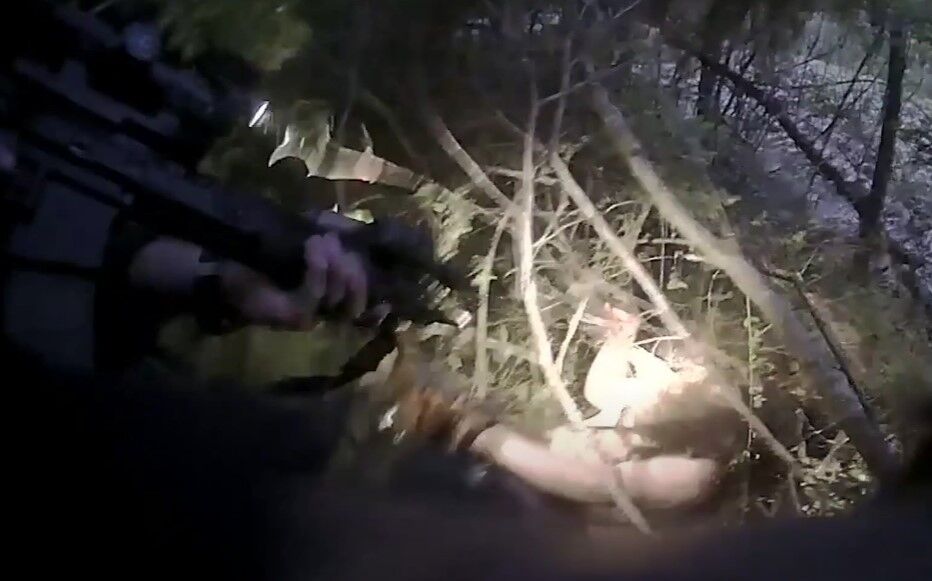 A still from an MNPD SWAT body camera showing Griffin being attacked by a police K9 seconds before he was fatally shot. 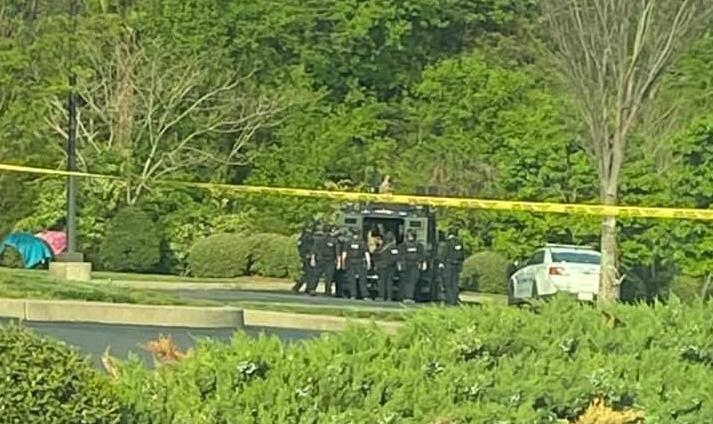 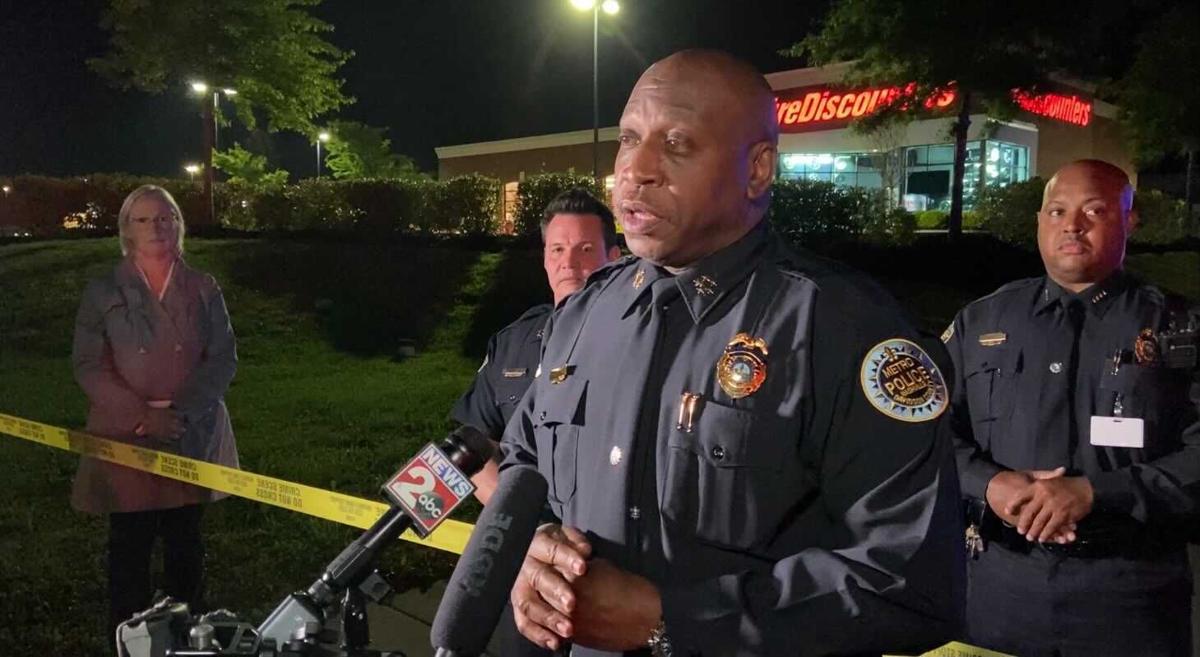 MNPD Chief John Drake issues a department statement at 10 p.m. on Saturday following a fatal shooting by an MNPD officer

UPDATE (10 a.m., May 2, 2021): The Tennessee Bureau of Investigation is investigating Saturday evening’s shooting of a man in crisis by Metro Nashville Police Officers after an hours-long standoff shut down a section of the Mill Creek Towne Center Shopping Mall.

MNPD spokesperson Don Aaron issued a video update of the shooting investigation on Sunday morning, which can be viewed below in full.

In the update, MNPD released a 911 call made by the mother of the victim, 23-year-old Jacob Griffin. Griffin was shot by an MNPD SWAT team member while they attempted to take Griffin into custody, after they said that Griffin fired several shots from a pistol.

Police were initially called to the scene, a homeless encampment in a wooded area a few hundred yards behind the Goodwill location, that is just outside of both the Brentwood and Nolensville city limits around 2:30 p.m. by Griffin’s mother. His mother lives in Brentwood.

In the 911 recording, his mother told dispatchers that Griffin was “schizophrenic and for about the last hour has been texting me messages that he plans to kill me and other people, and I think it’s something that Davidson County needs to address.”

While speaking to dispatchers, Griffin’s mother said that he was armed and she considered him dangerous, but added that he had never actually committed any acts of violence.

“I really don’t want the police to kill him, but I don’t want him to kill anyone else either,” she said.

Griffin’s mother said that Griffin was a former employee of the Goodwill store. She says he was fired from the location six months ago, and had recently threatened the store manager, specifically stating that he had recently “threatened to enter the Goodwill with a weapon and kill everyone he can find.”

Griffin’s mother said that the threats against Goodwill were not made on Saturday, but she said that he specifically threatened “mass murder” on Saturday.

According to Aaron, two South Precinct MNPD officers made contact with Griffin at his campsite at approximately 3:30 p.m.

Aaron said that Griffin told the officers that he had a gun and refused to surrender it, and at some point during that interaction one of the officer unsuccessfully deployed a taser, but that interaction was not captured on camera as South Precinct officers are not all outfitted with body cameras.

At around 4:10 p.m., MNPD negotiators and SWAT officers were requested to the scene, while Mobile Crisis staff from the Mental Health Co-Op arrived at the scene and signed emergency committal papers for Griffin at approximately 5:15 p.m.

MNPD released body camera footage from the SWAT officers who responded to the scene, with the SWAT interaction beginning at the five minute mark of the video.

Griffin can not be seen in the video, but SWAT officers can be seen standing behind a ballistic shield and negotiating with an audibly agitated Griffin, who is holding a pistol just feet away.

Around 7:20 p.m., police say Griffin fired one round from the pistol.

It’s unclear where Griffin was pointing the pistol, but no one was injured in the initial discharge, and SWAT members continued to negotiate with Griffin. At this point, the officer whose body camera footage was released raises his rifle and points it at Griffin.

Griffin became even more agitated at this in the video.

“You’ve done fired a shot off and you up’d the game for no reason,” one officer told Griffin who was continuing to yell for the officers to leave. “We’ve done nothing but be nice to you, and I can keep my promise, but you’ve got to walk out here without the gun out.”

During that deployment, which was also recorded and released, police said that Griffin fired another round from his pistol and then the SWAT officer shot Griffin.

It’s unclear from the video if Griffin, who was seen without a shirt and being attacked by the police K9, was pointing his pistol at officers when he fired, but the moment that he was shot with a police rifle is briefly caught on camera.

Griffin was transported to Vanderbilt University Medical Center where he died of his wounds.

No one else was injured in the incident, and MNPD Police Chief John Drake issued a statement to the press at 10 p.m. on Saturday.

The TBI is expected to complete a full investigation of the incident as they do for every officer-involved shooting in the state.

The Metro Nashville Police Department shot and killed a man who it said fired at officers on Saturday evening.

Police identified the deceased man as 23-year-old Jacob Griffin and said he repeatedly fired at officers who were attempting to negotiate with him to surrender.

An MNPD spokesman said that Griffin's mother had called police earlier in the day and reported that her son was possibly suicidal or homicidal.

MNPD officers made contact with Griffin who was in a homeless encampment in a wooded area behind the Goodwill located in the Mill Creek Towne Center Shopping Mall.

At some point during their interaction, police said that Griffin shot at officers with a gun.

MNPD's mobile crisis response and SWAT Team responded to the scene using an armored vehicle and continued negotiations with Griffin while the area was secured and evacuated of civilians. Police said they believed they were going to be able to take the suspect into custody without any further incident.

MNPD Chief John Drake spoke to reporters at 10 p.m., and said that during the continued negotiations Griffin rearmed himself and shot again at officers who returned fire, striking Griffin.

Griffin was transported to an area hospital where he died of his wounds. No officers were injured in the incident.

The Tennessee Bureau of Investigation was on the scene Saturday evening, as well as representatives from the District Attorney's Office and the Community Oversight Board.

MNPD is expected to release more information about the shooting as well as body camera footage in the coming hours and days.