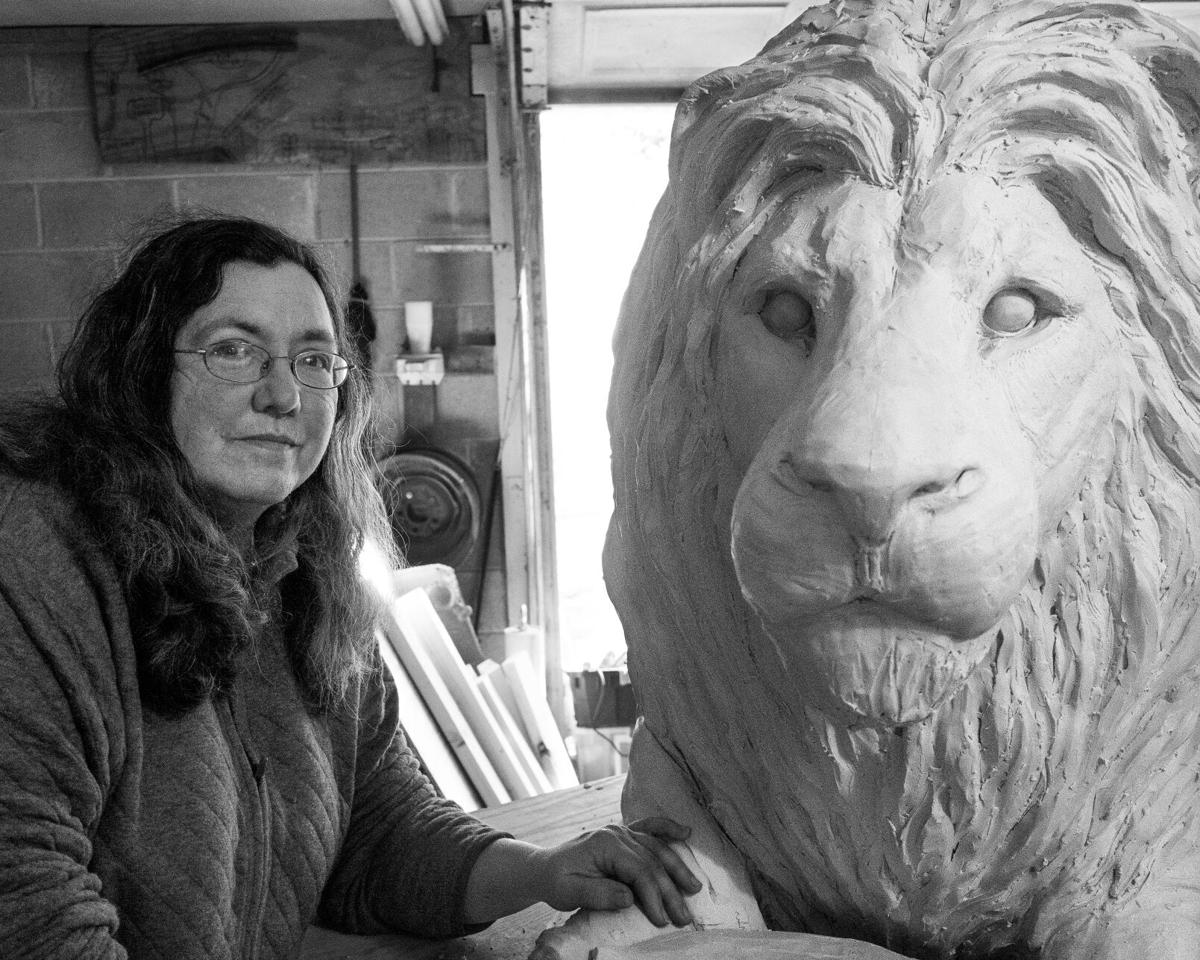 Sculptor Cindy Billingsley poses with her clay lion sculpture that will become a bronze statue for the new Brentwood Police Department headquarters that will open in the spring of 2021. 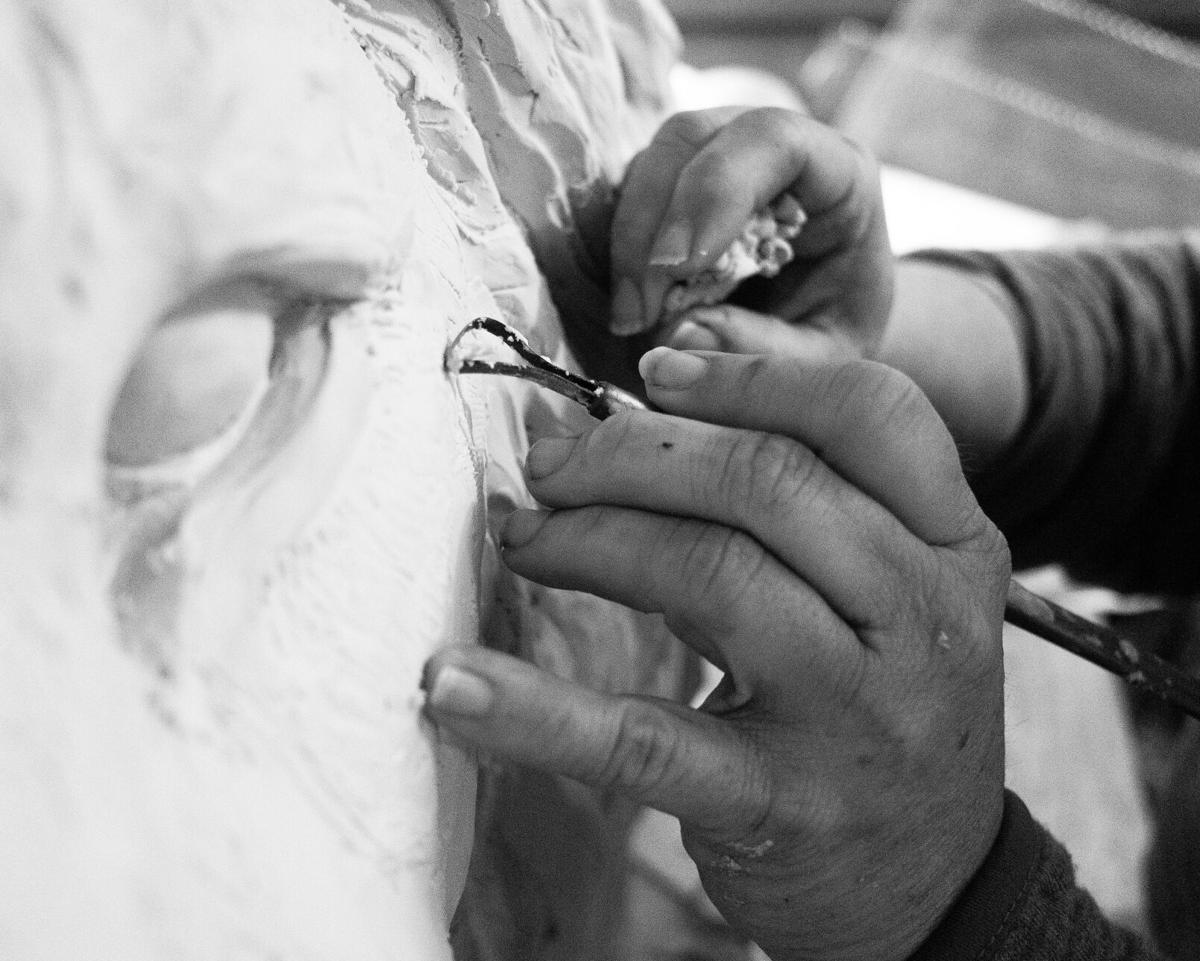 Sculptor Cindy Billingsley adds detail to a clay lion sculpture that will become a bronze statue for the new Brentwood Police Department headquarters that will open in the spring of 2021. 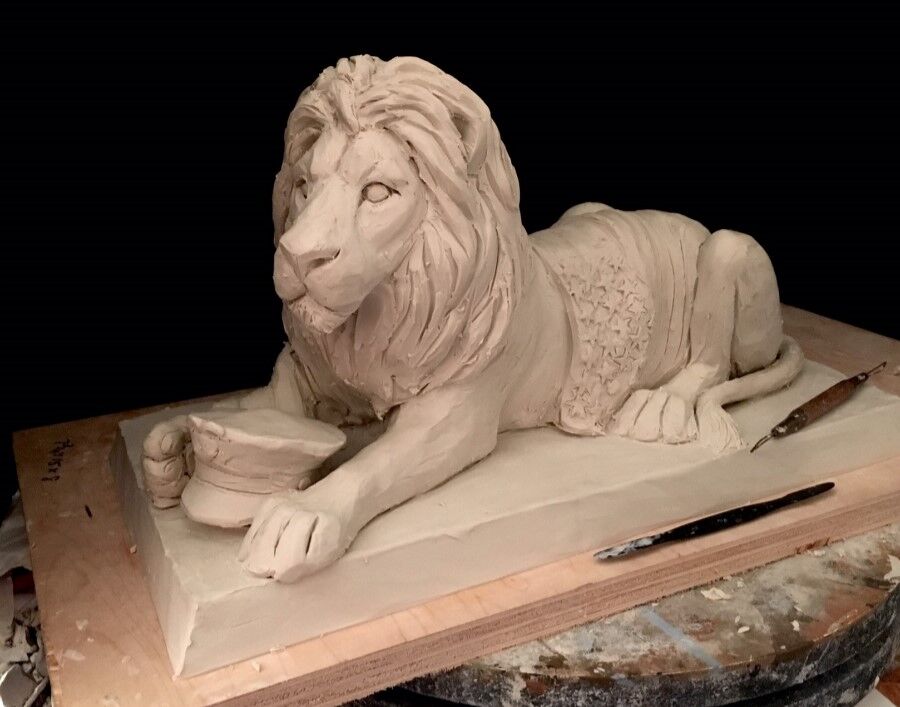 A design illustration of the Brentwood Police Department's memorial wall that will be outside of their new headquarters that will open in the spring of 2021.

When the Brentwood Police Department’s new headquarters opens this spring, one of the most impressive additions will be a bronze lion statue that will accompany a granite memorial wall near the employee entrance of the building.

That statue was designed and hand sculpted by Middle Tennessee artist Cindy Billingsley, whose sculptures and paintings are well known to any resident who has spent any time in the John P. Holt Brentwood Library’s children’s section.

Billingsley painted the children’s section mural and created various animal sculptures a decade ago and now she’s spent weeks hand-sculpting the lion inside of her Cookeville home studio, while using sculpting tools and knives to craft the lion from head to toe (to tail.)

The lion is laying alert on his stomach, draped in an American flag with a police cap between his front paws, work that took Billingsley around 250 hours to complete, often working an average of 10 hours a day.

The sculpture is composed of about 400 pounds of white, oil-based clay but is hollow, with a skeleton formed from plumbing pipes and a metal mesh to ensure that it can be sculpted, formed and transported without collapsing.

Billingsley started painting as a child and started selling portraits at 16-years-old, but it was when she saw an exhibit of the work of French sculptor Auguste Rodin at the Cheekwood Museum of Art that her professional life began to take shape.

“That was it - Something clicked, and I just had to sculpt,” Billingsley said.

Billingsley then began taking courses and apprenticeships, eventually focusing on ceramics and sculptures for much of her career before becoming known for her equestrian paintings.

Billingsley added that after her own experience with cancer something in her work changed, giving space for a new purpose within her passion.

"Something clicked and I no longer wanted to make an object, I wanted to make something that said something or mattered to someone or something," Billingsley said, adding that a major focus of her work has been on conservation and wildlife.

Billingsley's passion and skills have been crafted in part by the support she's received since she was a little girl, support that in particular came from her mother, who even let her create murals on the walls of her childhood bedroom.

After her mother was diagnosed with Alzheimer's Billingsley used art to communicate and connect in new ways.

“She’s the one who supported me to do art all my life,” Billingsley said. “So I wanted to kind of give her a voice that she no longer had."

"So I did a whole exhibit on Alzheimer's using her as the main subject, and that’s the first time that I got to put paintings and sculptures together," Billingsley said, adding that her explorations of painting and sculptures to her is "like speaking in two different languages."

Billingsley begins her process by researching and studying an animal, taking photographs of them if she can, and looking at images of an animal’s bone and muscle structure to understand how they look, how they move, how they behave and what she can do to bring their representation to the brink of life.

“Sculpture teaches the brain to see it in 3D,” Billingsley said. “Sculpture is a lot more complicated because I have to give it a personality so it doesn’t look stiff or empty. Plus, with the proportions it has to look right from any view that you’re looking at it, whereas a painting I just have to do that from one view.”

Much of this knowledge came from Billingsley’s traditional arts education at the Harris School of Art, which was located in Franklin until the mid-1980s.

“We learned a little bit of everything, but anatomy was a great foundation for both painting and sculpture.”

She then produced a maquette, a small scale version of the lion to show the city prior to receiving the commission in November of 2019.

Last week Billingsley delivered that full-scale sculpture to an Indiana foundry where it is now being transformed into a bronze statue in a weeks-long process that includes making several molds of her sculpture and various other precise steps to ensure the structure and quality of the piece.

“Then they have to pour hot wax into [the molds], and go back and get rid of the seams and then add some texture and I usually drive up and check the wax,” Billingsley said. “Then they take it apart and dip each part of the wax in a ceramic shell and they burn out the wax which leaves it hollow, and that’s when they pour the bronze in.”

The sections of bronze will then be welded together before the seams are ground down to smooth out the pieces before polishing the statue.

"It's nice that it will be in Williamson County because I grew up in Williamson County and lived there for 40 years," Billingsley said with pride. "I'm grateful that Brentwood gave me the opportunity to show my skills — I thought I could do it, and I visualized it and did it, so that's nice for an artist. That's the reward."

The 5-foot long statue will be unveiled this spring along with a 20-foot long outdoor granite memorial wall near the employee entrance of BPD's new headquarters.

According to BPD Police Chief Jeff Hughes, the wall will honor both fallen officers and those who have served the city for more than 20 years, while the lion is a nod to the lion sculptures at the National Law Enforcement Officers Memorial in Washington D.C.

The memorial wall will be engraved with BPD's motto, "Loyalty Above All Else Except Honor," and will include the name of the first officer lost to the department, Destin Legieza, who was killed last year.

“The wall will be a visual symbol that any day we could lose one of our own,” Chief Hughes said. “Officer Legieza was only 30 years old; way too young to be taken. The wall will serve as a reminder that life is precious and law enforcement can be a dangerous career."

Money for the lion sculpture was raised in hours by private donations, but the city will cover the costs of the memorial wall.

And when the statue is unveiled later this year it will stand in remembrance of those who have been lost and in appreciation and pride of those who continue to serve every day, after being crafted by an artist who breathes life into metal that will weather all storms and outlive us all.