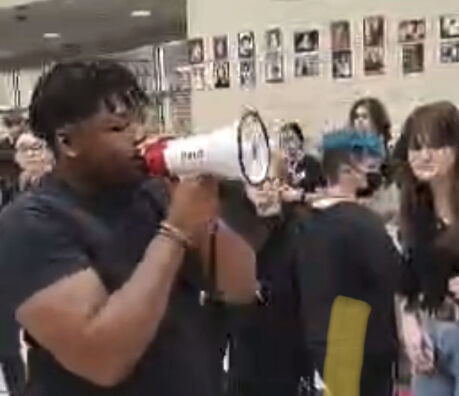 A still from a video of the RHS protest that was posted online and provided to the Home Page. 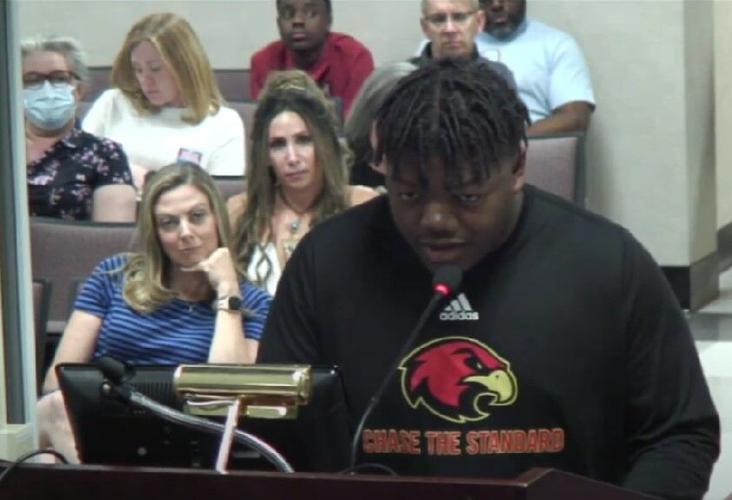 Ravenwood High School senior Jadon Moore speaks to the Williamson County Schools board on May 26, 2022.

On the morning of Monday, May 2, Ravenwood High School senior Jadon Moore found the N-word entered as the username on his assigned school computer, an incident that set off a conversation about race, accountability and action in Williamson County Schools.

Moore told his teacher and a school resource officer, the latter quickly checking school security cameras. The recording showed a white student typing the slur on the computer in question, an incident that Moore said he never expected to happen.

“I was shocked. I was appalled,” Moore said. “That still to this day, that we're still getting treated as less human beings because of the color of our skin.”

Moore said that the white student, who we are not identifying, was given three days of in-school suspension as punishment. For Moore and other Black students, though, that wasn’t enough.

“We voiced our opinions that it wasn’t fair, and it wasn’t right, so we went to the principal, and the principal agreed with us that the punishment was too light,” Moore said in a phone call. “So we worked together and talked it out, and we got the policy changed with the help of the Ravenwood administration.”

Moore said that the punishment was increased from three days to 10 days of in-school suspension, something that he thanked the school for addressing and applying harsher action. Per district policy, Williamson County Schools would not specifically comment on the punishment that was handed down to the unidentified student.

Moore said that the student who typed the slur did show remorse when confronted by the school administrators. Though, he said that he wasn’t sure of any specific motive to the incident, adding that it’s evident that it was his computer as there are photos of Moore, who is Black, on the front of the computer.

While Moore and other students say they were pleased with the administration's openness to their concerns, they also said that the grander issue of racism inside of Ravenwood and WCS and in the greater Williamson County community required a greater response.

On Friday, May 13, the group of students led a previously announced peaceful demonstration inside of RHS between classes, linking arms, holding signs and using megaphones to make sure that the entire student body was aware of what had happened and why it was a problem.

“We just used that for a time to demonstrate our frustration against racism, there was no disruption in class, and none of that,” Moore said.

While dozens of students showed up in solidarity with the protesting students, they did report some backlash from other students who cursed at them and mocked them for speaking out.

A video of the protest was posted on social media platforms and was soon reposted by progressive outlet the Tennessee Holler. It was this past Monday when Moore and other students, as well as some adults, spoke at the WCS board meeting, pushing that conversation into the public record.

“We’re hopeful to make this incident a difference and better for the future to come,” Moore told the board. “I want to make this clear that we are not attacking Ravenwood High School or the student who committed this act. We are coming together, and we are attacking racism as a whole.”

“To everybody who is not taking this seriously,” Moore continued. “You are part of the problem, and I hope you wake up before it’s too late. If you are defending the student’s actions, we are not scared of you, we will not stop, and you cannot stop the change that is going to come. We are hopeful to make this change.”

“Some of what was discussed [in public comments] also reminded me of the goals that we set as board members, and as a district related to my work as superintendent,” Golden said. “I want to remind us that the first three items that the Fostering Healthy Solutions report addressed [were] the policy handbook with recommendations to create templates so that there is consistency district-wide related to our standards for teachers and students...[we must consider] disciplinary action, reviewing our disciplinary actions at the administrative level to ensure consistency district-wide in communication.

Golden highlighted above WCS' recent work with Fostering Healthy Solutions, an organization that is helping the school district address racism and other forms of bullying after an increase in complaints surfacing from students.

“We’ve talked about some items such as the piloting of our bullying app and some other items," Golden added. "We’ve got some room to grow in all of those, but I see some growth that we’ve worked on this year and that we’ll be working on this summer to make sure that we have growth towards consistency and the consequences for that, but it is about teaching respect. We’ve worked on that over the years with different programs, and that needs to be an ongoing effort to encourage all of our students and teachers to treat each other with respect.

“A part of that is getting to know people...The more you know someone, I am convinced, the better you will be able to treat others, the more consistent you will be in being decent to others, so there has to be an element of getting to know each other at the school level.”

It's been just two years after the murder of George Floyd by a white police officer in Minnesota that sparked nationwide protests centered on systemic racism and injustice in America. Williamson County found itself at the center of a few demonstrations that summer involving the Confederate monument in downtown Franklin. Outcry also arose about the Confederate flag on the county seal, which is set to be removed soon after a lengthy process.

Another RHS student who took part in the protest, junior Mars Griffin, said in a phone call that the racist incident at the school isn’t just a WCS problem, but evidence of a problem in the greater community.

“I think that they need to know that this doesn't start when your child enters school,” Griffin said. “That starts in the home that starts with the parents teaching their children, that you shouldn't use slurs, that you can't use slurs, that they are not funny, that they're not a joke, and that honestly, they have a severe negative effect on how African American students feel in their school building.

“We feel unsafe going to school with people who think that these things are okay, and these things are funny, and that feel comfortable with doing things like what happened to Jaden, and other things, because Jason's incident is definitely not an isolated one...Ultimately it is the parents job to tell their kids this thing is racist. You cannot do this thing.”

On Saturday, one day after the RHS demonstration, a race-motivated mass killing took place in New York.

In the attack, 10 Black people were targeted and killed because of their race, and three other people were wounded, at a Buffalo, N.Y., grocery store by a self-proclaimed white supremacist, who was apprehended by law enforcement.

The assailant espoused ideas about the racism-fueled "great replacement" theory that have been echoed in far-right circles and on prominent Fox News program Tucker Carlson Tonight. Carlson has come under intense fire after the attack when the theory was found ingrained in the killer's manifesto, but he has tried to distance himself from the event and blamed mental health for the killer's actions.

The FBI says an investigation into the attack is ongoing, seeing what took place as “both as a hate crime and racially motivated violent extremism.”

The accused gunman livestreamed the shooting on Twitch, which clearly shows the N-word written on the rifle's front sight as he aimed and fired at people at close range, a clear example that the word continues to be literally weaponized against Black Americans.

To Griffin, the racist event that took place at Ravenwood highlights the greater need for empathy and understanding in the county when it comes to treating all fairly.

“We’re all neighbors, we’re all living in this community together and we all want to give back and to improve this community, and you should care because this could be your next-door neighbor or your son’s best friend from the basketball team, or anyone that you know," Griffin said.