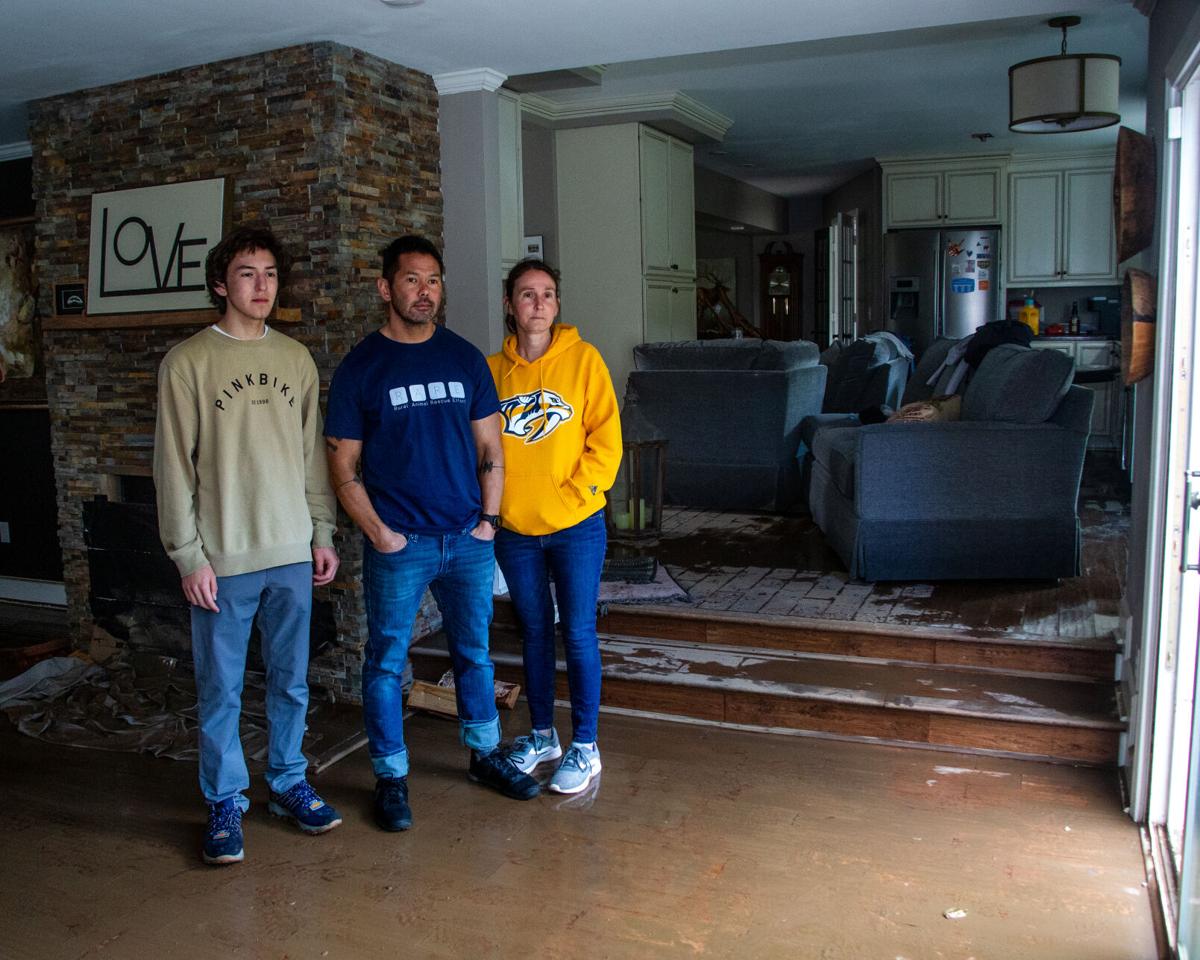 17-year-old Dodson Avrit and his parents Matt and Lisa Avrit stand inside of their flood-damaged home and look out at the swollen Little Harpeth River that backs up to their Brentwood home. Hours earlier in the dark of night they were rescued on a Brentwood Fire and Rescue Swift Water Rescue Team raft from more than four feet of rushing water, six inches of which entered their home. 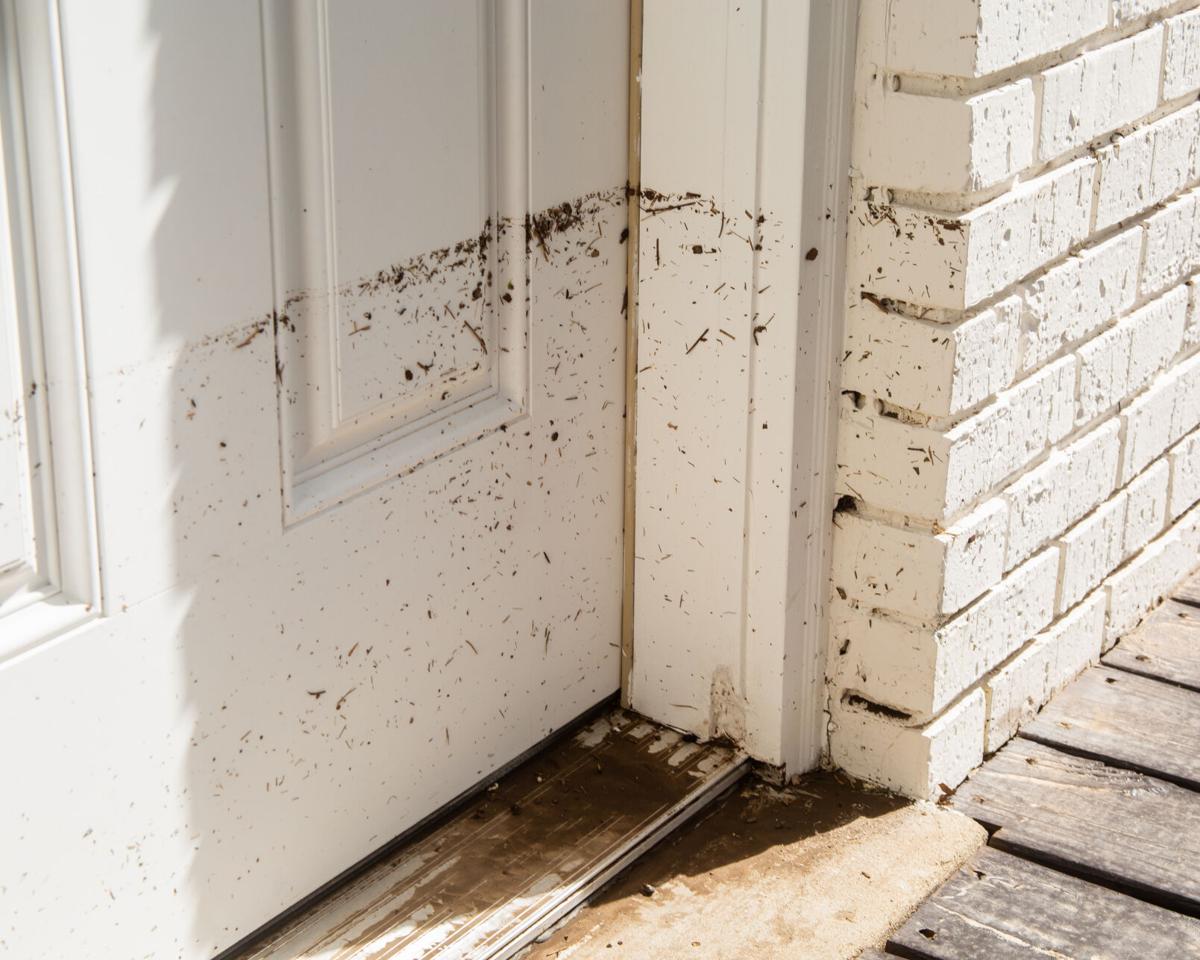 A debris line shows how high water was when the Little Harpeth River flooded into a Harpeth River Drive home in Brentwood in the early morning hours on Sunday. 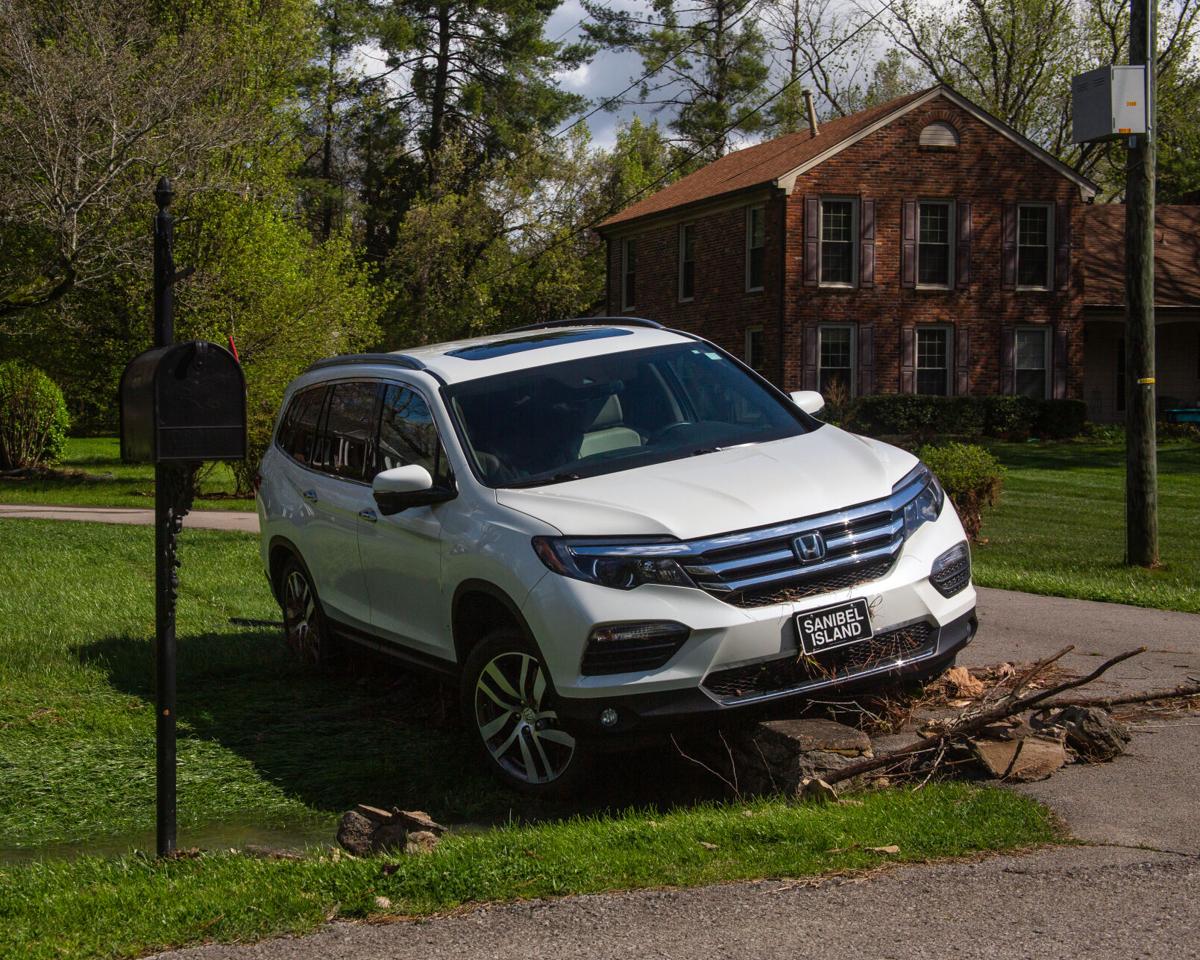 An SUV sits stuck on Harpeth River Drive driveway in Brentwood after flash flood waters pushed it from the driveway in the early morning hours on Sunday. 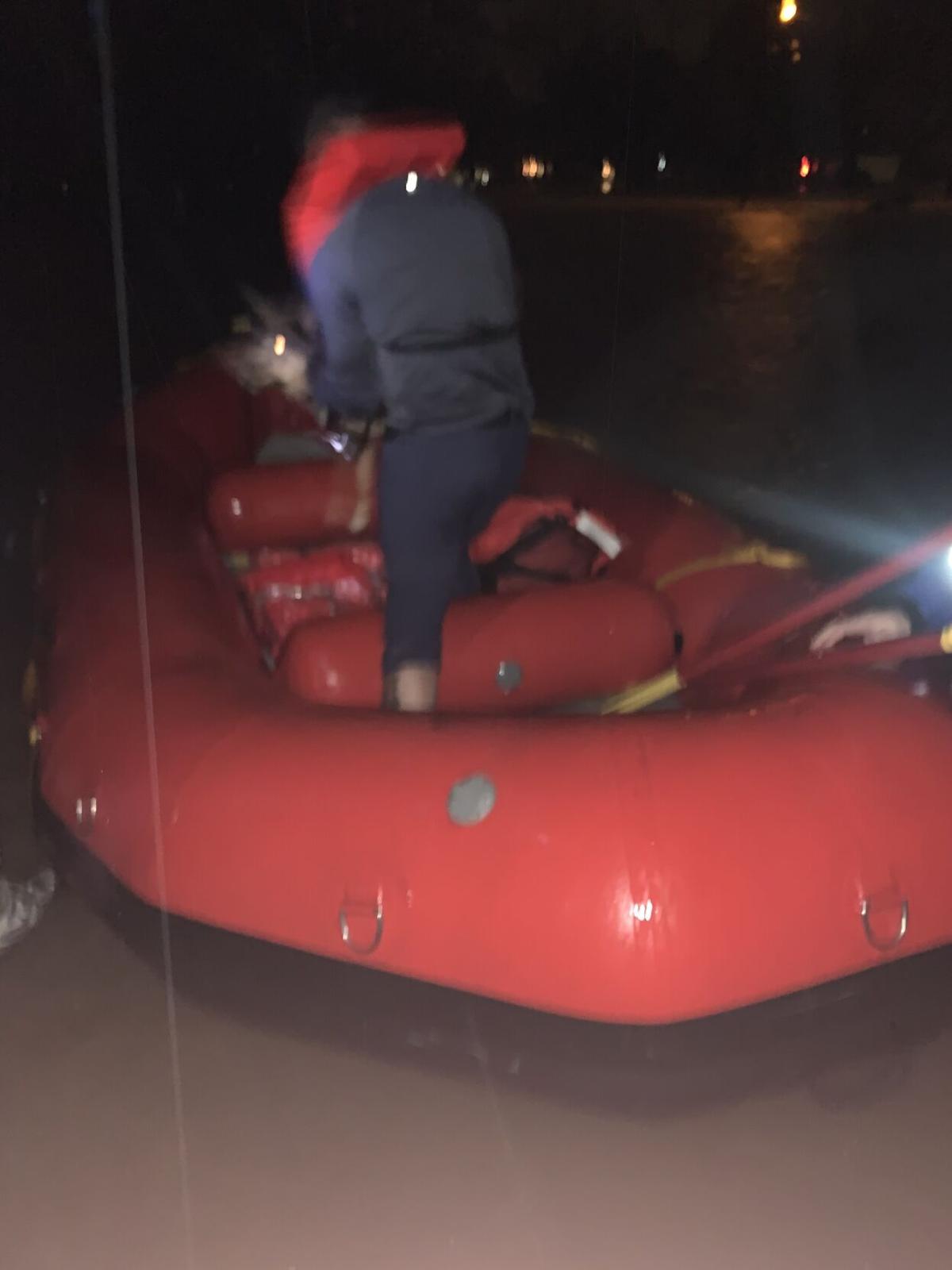 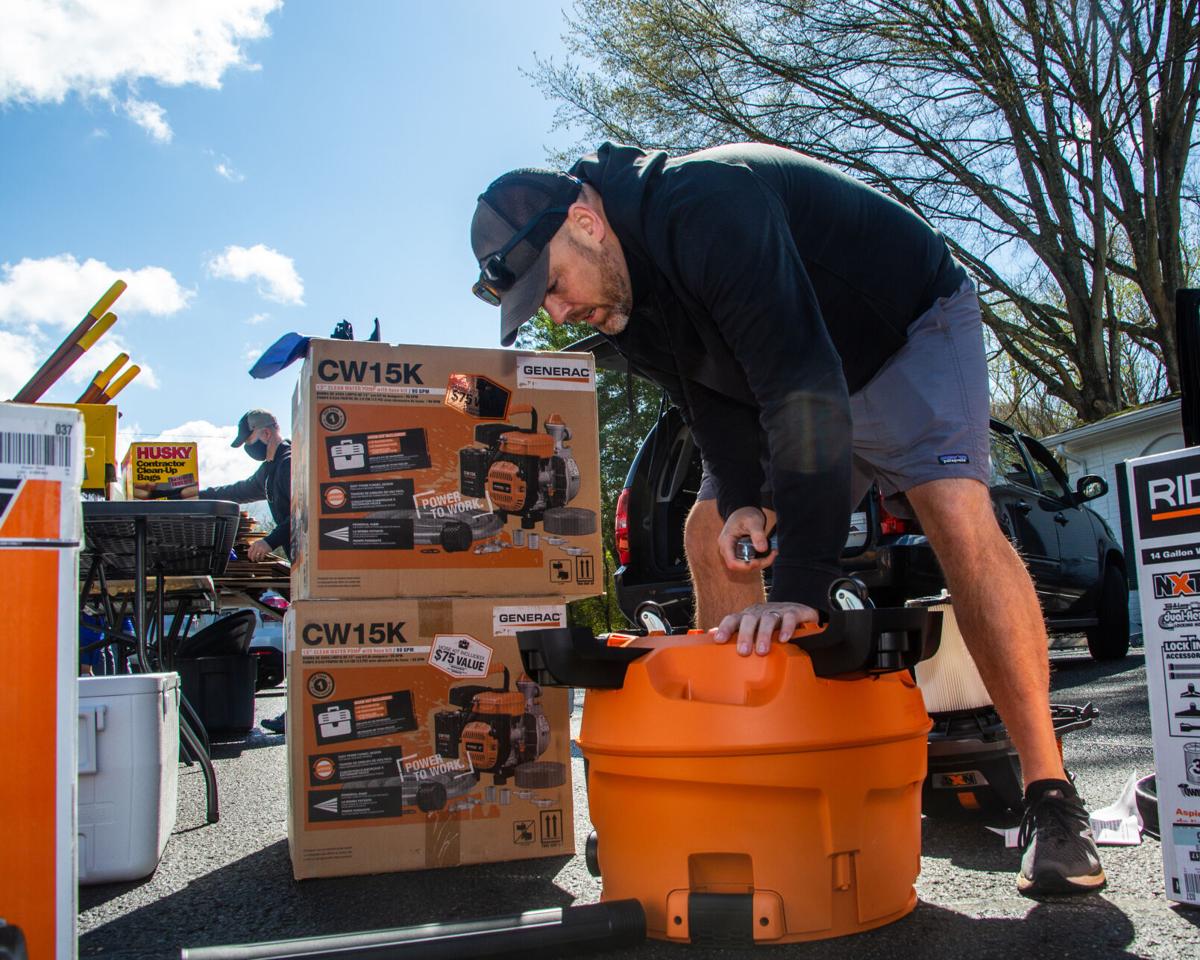 Rusty Goodsell works alongside other neighbors to unpack a wet vac that community members purchased from Home Depot along with generators, mops and other goods to help clean up flood-damaged homes.

Williamson County was battered by Saturday’s thunderstorms that saw flash flooding shut down more that 50 roads and first responders executed dozens of water rescue operations into the early morning hours on Sunday.

According to the National Weather Service Nashville, rainfall totals from Saturday morning through Sunday morning reached 8.65 inches in Franklin, 8.16 inches in Brentwood, 7.83 inches in Fairview and 5.98 inches in Spring Hill while the Nashville International Airport saw 7.01 inches of rain.

That rain quickly impacted low-lying areas and brought the Harpeth River past the flood stage and brought high flood waters inside of dozens of homes in neighborhoods along the river banks.

One of those homes is owned by Matt and Lisa Avrit who were rescued along with their 17-year-old son Dodson and their dog by Brentwood Fire and Rescue Swift Water Rescue Team members who used a raft to go house to house in the dark, early morning hours on Sunday.

It was around midnight when the Avrits realized that the water was going to flood their yard, which prompted them to move lawn chairs and move their cars to higher ground in the neighborhood.

“From 12 [Midnight] to about 2 [a.m.], it went from just breaching the bank to having six inches in our house, it was that quick,” Matt Avrit said.

Water made its way to the steps of the Avrit’s Harpeth River Drive home and eventually flooded the home with about six inches of rain water, forcing the family to try and salvage furniture and other belongings by bringing them up a few steps that were elevated inside of the home.

When the water kept coming and covered the interior steps and flooded the remainder of the first floor, they took shelter upstairs before rescue crews arrived.

Outside, the water in their front yard was chest-deep and soon BFR firefighters were battling the rushing water, dodging submerged mail boxes and other hazards in order to transport community members to safety.

“They actually came out here with a boat with a motor and burned up the motor trying to fight against the current, so they came back out about 30 minutes later with another raft and three guys with paddles,” Avrit said. “It was flowing extremely fast. It would have swept us away easily if we hadn’t been in a raft.”

“It was also concerning because you don’t really know what lies beneath the water here,” Dodson Avrit added. “There were mailboxes we were trying to dodge, and there’s a car down there that’s been pushed off of its driveway into a ditch.”

“They were fantastic,” Lisa Avrit said of the rescue crews.

According to a BFR Facebook post, the department rescued more than 50 people from more than a dozen homes throughout the night.

The number of water rescues county-wide was more than 34 from vehicles and homes, with the Williamson County Sheriff’s Office Special Operations Division members using the department’s two five-ton army surplus vehicles to drive through flooded roads.

Evacuations and rescues were made across the county including in the Meadowgreen Acres subdivision, Old Harding Road, and Del Rio Pike.

Two families even took shelter in the Brentwood City Hall building after they couldn’t find any open hotel rooms in Brentwood or in Nashville.

“First responder agencies have been working around the clock to provide life-saving services to our community. Mutual aid has been provided across the County so that all other emergency support services could continue to be provided,” WCEMA Director Todd Horton said in the news release.

Despite the amount of damage and danger, WCEMA External Affairs Officer Hannah Bleam said in an email that no serious injuries or deaths were reported due to the storms.

Emergency crews also responded to eight homes throughout the county that were struck by lightning.

Once the sun came up residents across the county began to assess the damage, and in many cases they began to find ways to help those in need.

One of those people was Rusty Goodsell who joined other neighbors in the parking lot of the Brentwood Swim and Tennis Club at Wildwood to set up and distribute supplies to help clean up the mess.

Neighbors purchased generators, wet vacs, mops, water pumps and other supplies from Home Depot, supplies that were open to anyone in need.

“These are all our buddies and our friends,” Goodsell said. “Wildwood is like walking back into the 1950s.”

“This is more than just a neighborhood,” Martin Spears, who serves as a community board president and has lived in the community for 12 years said.

“This is a true community -- We raise our kids together, our kids all go to the same schools, we look out for each other,” Spears said. “I mean this all happened organically. No one said, ‘Hey, you need to go to Home Depot, you need to do this,’ this is just people showing up and helping and taking advantage of the love that we have here.”

WCEMA is asking residents to complete an online property damage survey that could help the county assess damage and determine potential eligibility for state or federal disaster aid.