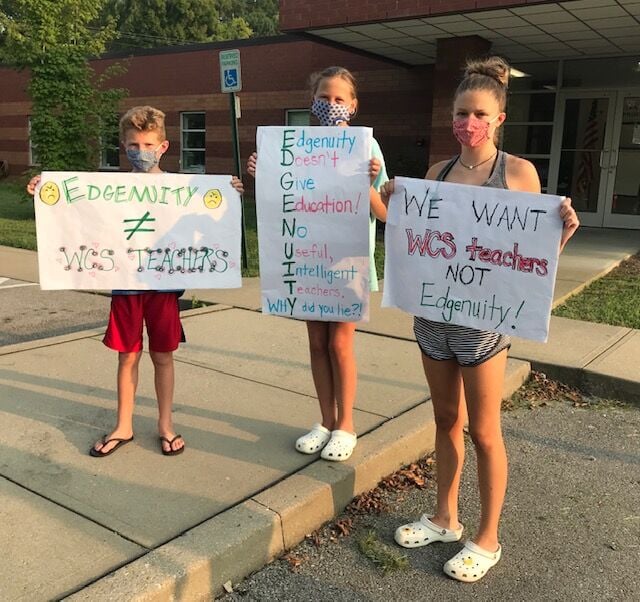 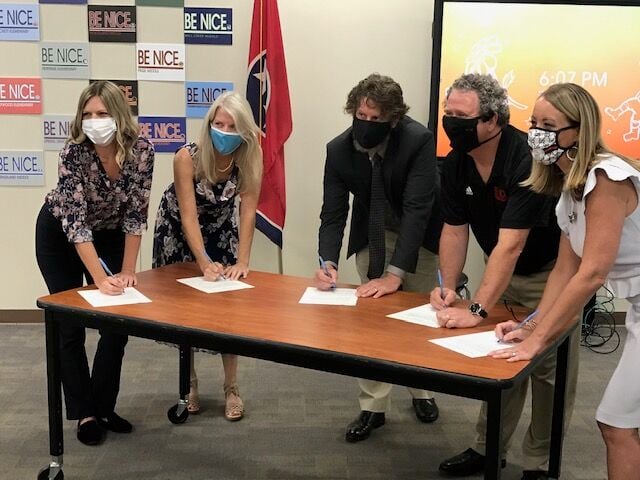 Signing papers after being sworn in were (from left) Jennifer Aprea, Sheila Cleveland, KC Haugh, Eliot Mitchell and Angela Durham.

Through a survey of teachers, countless emails from parents and the presence of protesters and an online petition, it’s obvious the challenges facing WCS Online are ongoing as the Williamson County Schools district wraps up its first month of the 2020-21 school year.

Those concerns were addressed for about four hours Wednesday night in a special-called meeting of the WCS Board of Education. While Superintendent Jason Golden gave a general summary of the school year’s progress for those students who have chosen the more traditional path, most of the meeting centered on the WCS Online curriculum that has an enrollment of around 6,750 students and the involvement of 642 teachers from grades K-12.

The issues have overloaded the inboxes of board members and district staff alike.

“We’re taking these concerns seriously, and we’ve done a lot of work to take steps toward improving that, especially to those families who are really experiencing difficult times,” Golden said. “Some have said [WCS Online] is great, some have said it’s OK and others have said it’s horrible, and we want to make sure we address those challenges.”

In a survey of teachers conducted by the district, only 65% felt comfortable with the program.

“We haven’t used Edgenuity on a large scale like this before,” Webb explained during a presentation, “and to be quite honest, our teachers didn’t have access to it until the day before instruction began for online students.”

She added that part of the reason for the short-notice rollout was the fact that the representative who serviced WCS suddenly retired just before the school year started.

“We acknowledge that the ask from our teachers in this environment is huge, and we need to think creatively about how we can give additional time to manage all these moving parts.”

In addition to the numerous emails board members and WCS staff have received, they were also met with questions and demands from protesters who showed up outside the Professional Development building where Wednesday’s meeting was held. Most are displeased with Edgenuity.

“We have sent emails to board members and staff members, to no avail, no answers,” said Jennifer Kimble, a mom to students who are enrolled in WCS Online. “When we found out the board was having a special-called meeting tonight, we rallied the troops and got about 40 parents here, some with their children. Some board members and staff elected to listen to our concerns and others made a bee line for the door.”

Most of those protesting are likely also making their voices heard through a petition that was launched Sept. 1 by former WCS school board member Anne McGraw. The petition, which had 1,059 signatures as of Thursday afternoon and a goal to reach at least 1,500, is asking that the district halt grading of students until the problems with WCS Online are fixed.

It specifically mentions the issues with Edgenuity and another software program WCS Online uses, Schoology.

“I think the concerns are vast,” said board member KC Haugh, who represents District 11. “It doesn’t seem there’s one aspect of this that’s easy to check off. It seems like there are a lot of really substantive projects in and of themselves. And the school year just keeps moving along.”

Wednesday’s meeting also included the swearing in by Williamson County Mayor Rogers Anderson of school board members from odd-numbered districts. In addition to Haugh, they were Angela Durham (District 1), Eliot Mitchell (District 3), Sheila Cleveland (District 7) and the newest member, Jennifer Aprea. She won a three-way race for District 5 to replace Gary Anderson, who retired after having served on the board for 30 years. Rick Wimberly (District 9) was not in attendance.

Click here to view all of the special-called meeting.