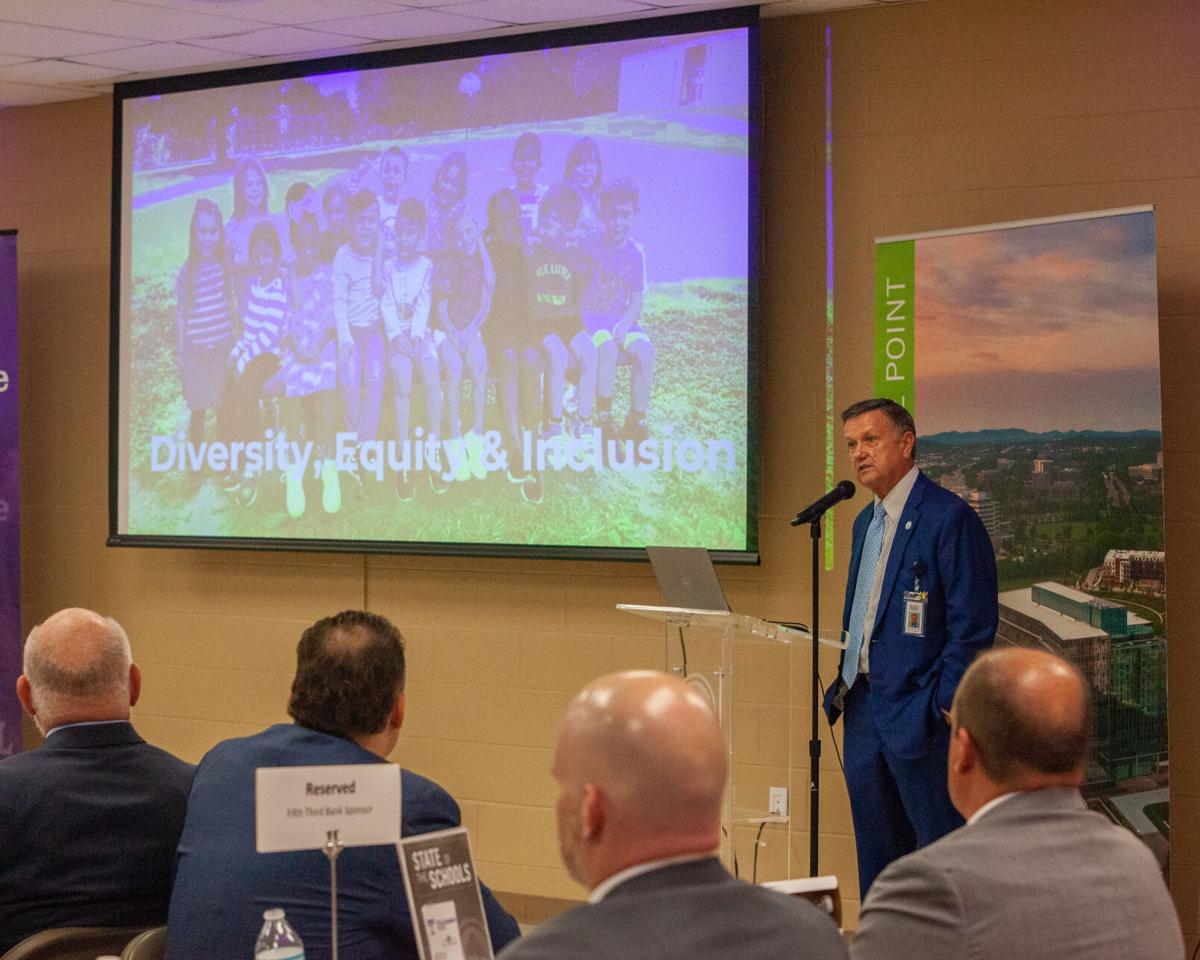 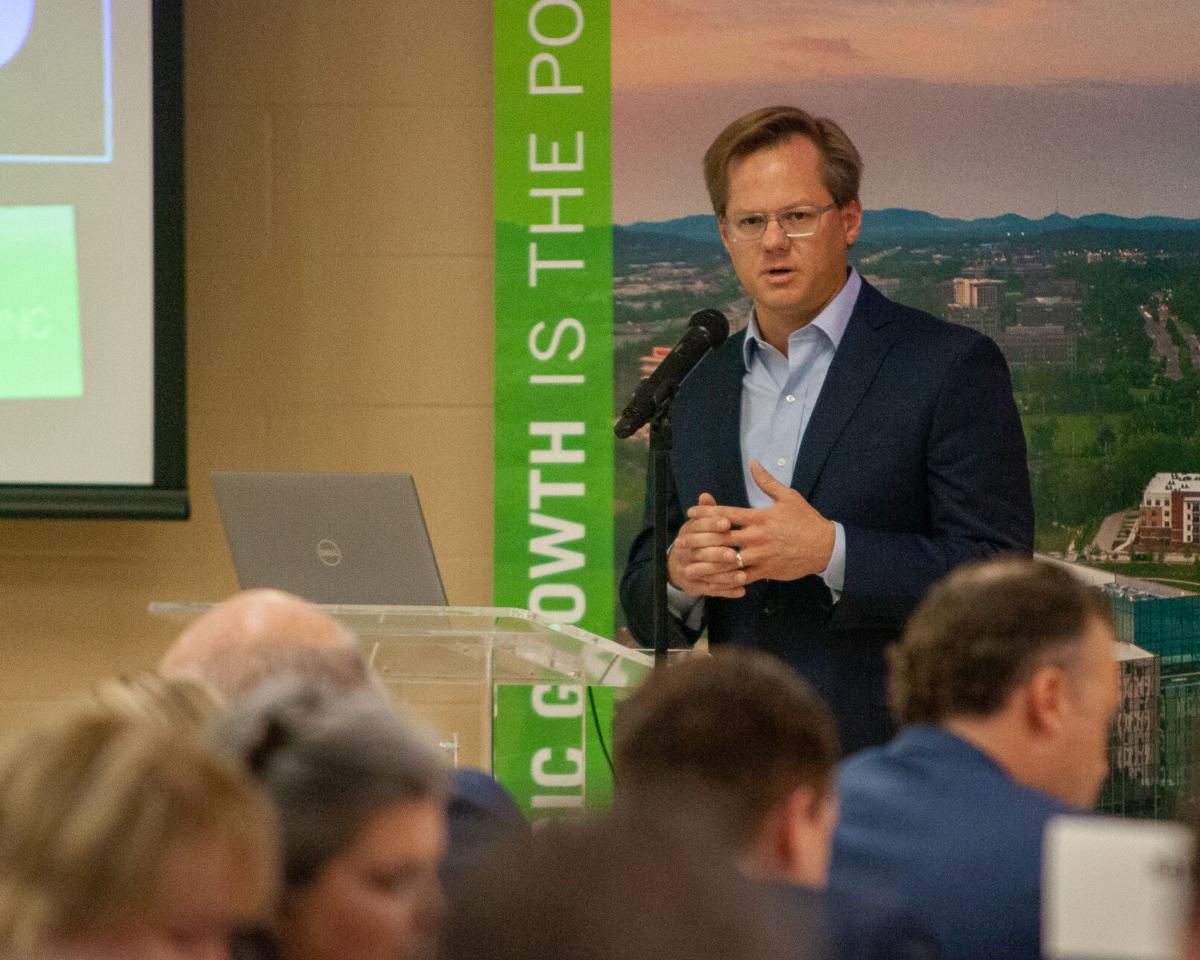 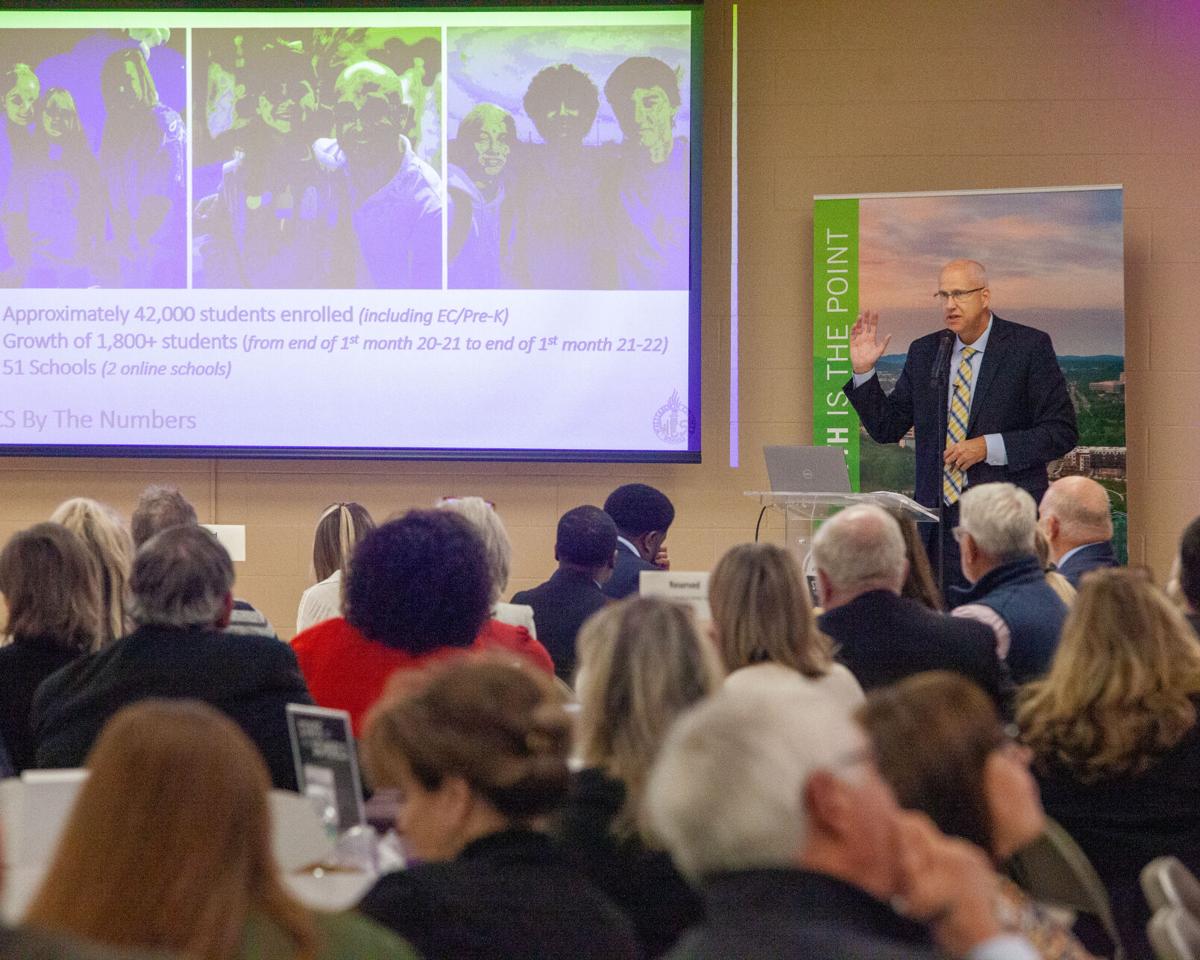 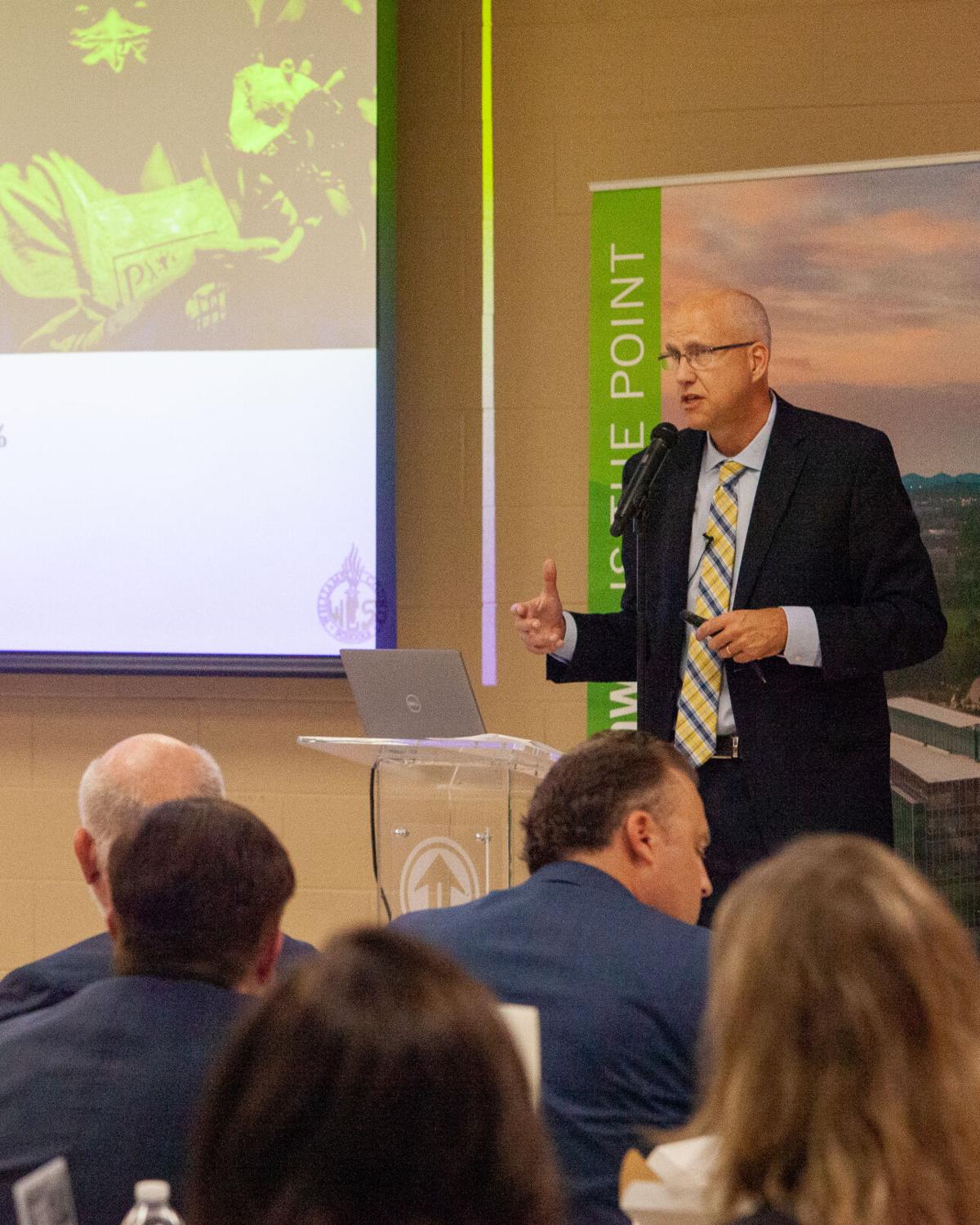 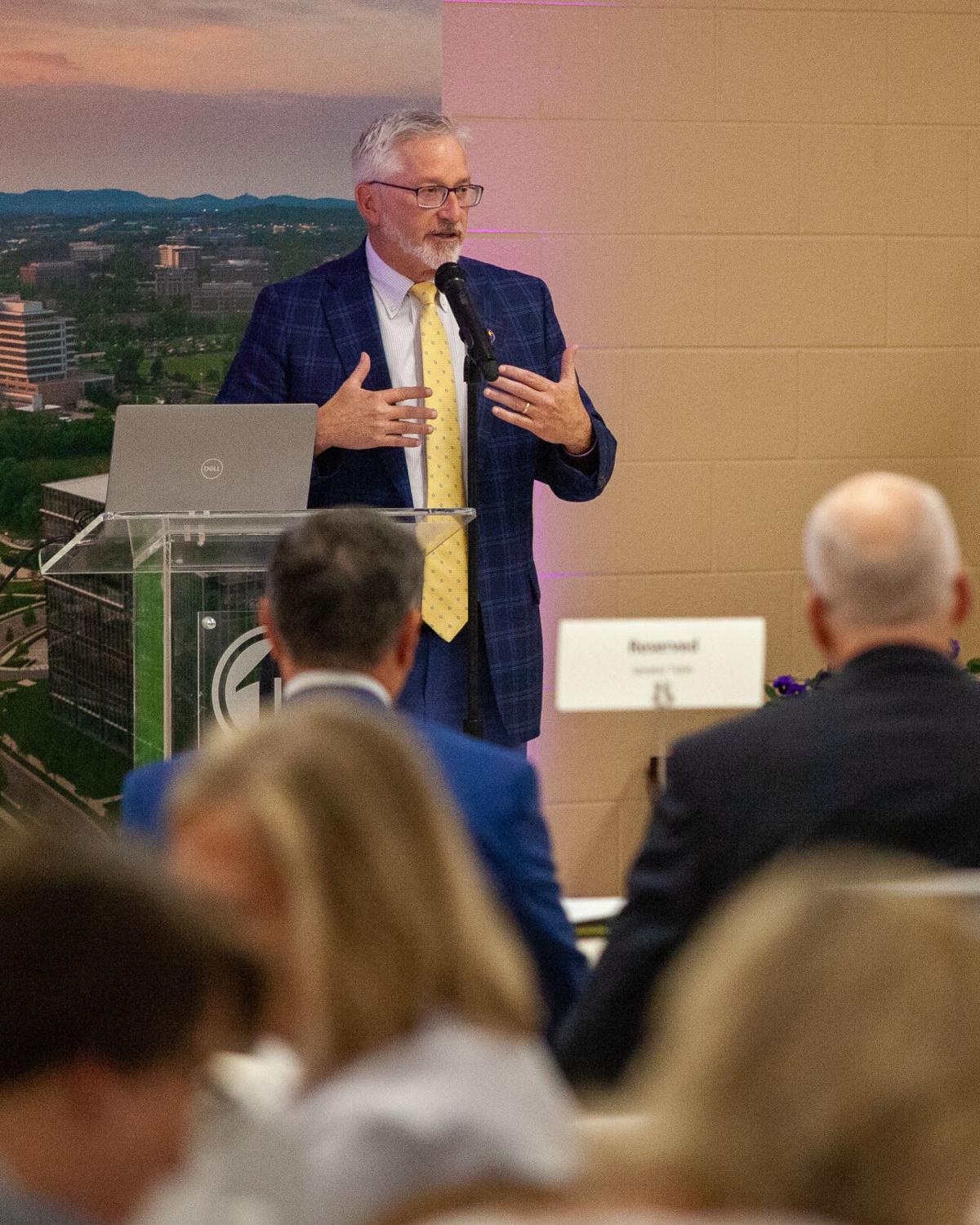 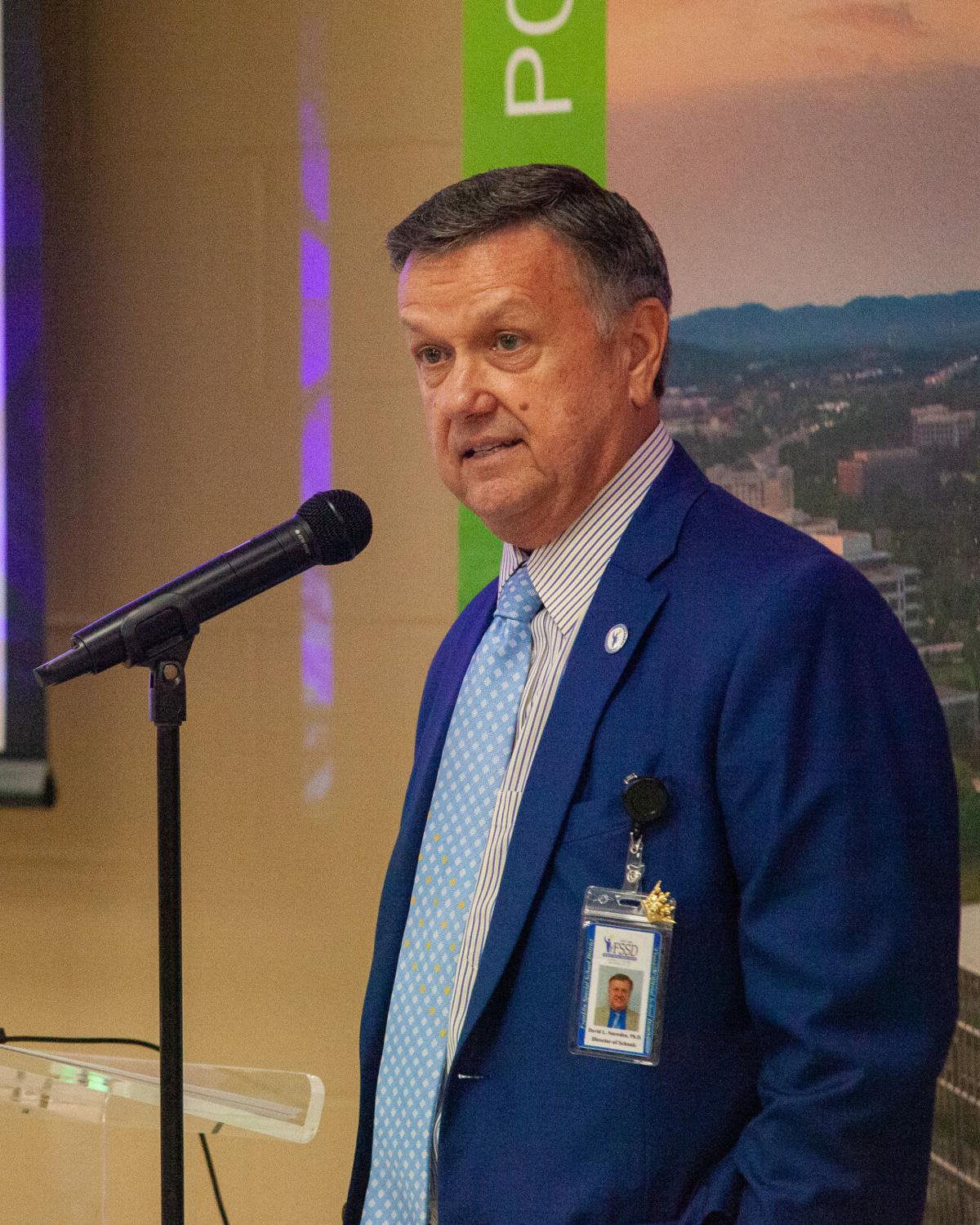 Before the State of the Schools program got underway Tuesday at the Williamson County Ag-Expo Center, the roomful of government officials, community leaders and business owners deemed it appropriate to recognize a state of the school board.

That is, they stood in applause as Williamson Inc. President and CEO Matt Largen acknowledged the school boards that represent Williamson County Schools and the Franklin Special School District. Williamson Inc., the county’s chamber of commerce, each year hosts the State of the Schools luncheon that Tuesday featured WCS Superintendent Jason Golden and FSSD Director of Schools David Snowden. Several board members were in attendance.

“To the school board members,” Largen said as he kicked off the program, “I appreciate, our team appreciates, our community appreciates the work you do day in and day out for our schools.”

It was evident from the standing ovation that those in the crowd were appreciative as well, especially considering how school boards across the nation have come under fire in the past few months over COVID-19 mitigation strategies, curriculums and other issues. Parent groups such as Moms for Liberty have consistently disrupted school board meetings over the past few months, particularly at those held by WCS.

And just recently, Tennessee legislators voted in a special session to allow communities across the state to hold elections for school board by party affiliation, seemingly a notion that board members can currently hide behind their political beliefs without an R or a D by their names.

“Legislators made their decision, but for me, it’s about supporting the people who are in elected office,” Largen told the Home Page after the program. “That is really, really important. It is not easy to serve no matter in what capacity you do. Our job is to support our schools and support those board members who give much more time and resources than people realize.”

Neither Golden nor Snowden touched on the controversy involving school boards, and didn’t really address concerns with the pandemic. Case numbers in both districts are considerably better now than they were when the Delta variant caused a resurgence at the start of the 2021-22 school year in August.

“Last year’s remarks centered around the challenges COVID was presenting and how we as a district — our schools and personnel — were adapting to those challenges,” Snowden said of the virtual State of the Schools in 2020. “Today, I promise you will hear very little about COVID.

“The 2020-21 school year was challenging and difficult, to say the least. No one had ever experienced a pandemic like we had just experienced and continue to experience. After schools were officially closed the last nine weeks of the school year, there were many predictions relating to the learning loss that was going to occur across the state and the nation due to students being out of school.

“Those analysts failed in one aspect. They failed to take into consideration the passion, the dedication of our teachers, school leaders and FSSD employees and the efforts they would make to ensure student success. Our students did show some learning loss, but it was limited and not nearly to the degree that many had projected.”

Among other items, Snowden pointed out achievements made at the eight FSSD schools, including impressive TCAP results from students and the recognition from the Tennessee Department of Education of Reward Schools in the district — Franklin Elementary, Liberty Elementary, Moore Elementary, Poplar Grove Elementary and Freedom Intermediate. Liberty was also named a National Blue Ribbon School.

Snowden did acknowledge the division that has infiltrated communities across the country because of the pandemic.

“We want to encourage everyone to focus on all the great things we have in common, as a community, as citizens, as Americans,” he said, “and to help spread this 'Be Nice' philosophy and to express gratitude for our many blessings.”

Golden had to take a page out of the "Be Nice" campaign as well, suggesting it’s needed now more than ever. He also touched on a certain curriculum concern.

“I’ve got to be blunt. We’re not teaching critical race theory. As it’s defined by those who are asking, it’s designed to make someone feel guilty, in essence, as a result of their race. But what we are doing is finding ways to help all our students to feel safer in their school. …

“We’re continuing to have those conversations and we’ve gotten professional help so we can strategically plan to increase our students’ feeling of safety in our buildings. That is important. Every student deserves to feel safe and we’re working on that.”

As the county continues to grow, Golden said so does the school system. Enrollment now in 51 schools is around 42,000 students, up from just over 39,000 two years ago. One of the district’s biggest challenges is finding teachers to help with those numbers. Elementary schools are currently short 18 teachers, while middle schools are short eight and high schools down 14.

“We’re struggling with staffing,” Golden said. “Tennessee needs to be, must be and is an importer of teachers now. Our colleges are not producing enough teachers to fill the demands we have for teachers. We actually recruit beyond our state. We recruit in Ohio, Pennsylvania — we go beyond middle Tennessee to recruit.”

Despite the challenges, Golden reported some impressive numbers. For 2021, 72 WCS students were named semifinalists by the National Merit Scholarship Corporation. The district's previous record of 53 was originally set in 2018 and again in 2020. The number accounts for more than a third of the total merit scholars in Tennessee (215).

“We had an incredible jump from one year to another,” Golden said. "The work we’re doing to give those students opportunities is pretty incredible.”

Through the achievements and the challenges, both school districts are essential to the economic wellbeing of Williamson County, according to Largen.

“It is critical,” he said. “The reason people move to Williamson County is because of the schools. Our public school systems play a critical role in our economic success, and they have for the past several decades and will for the next several decades.”

The full State of the Schools can be viewed through the Williamson Inc. YouTube page.