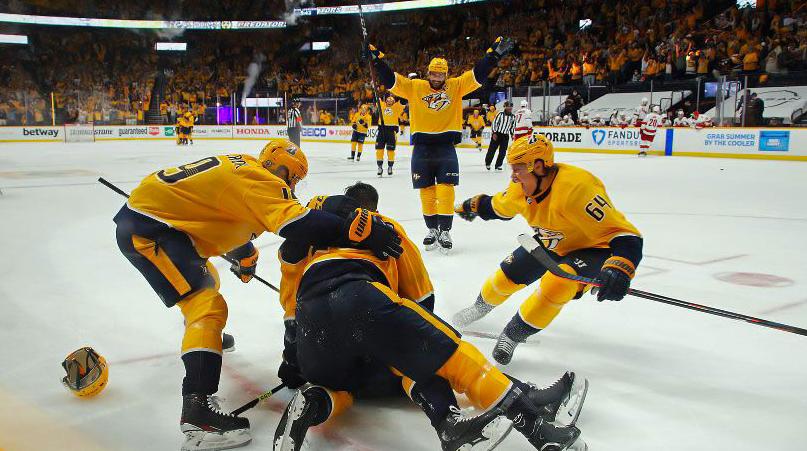 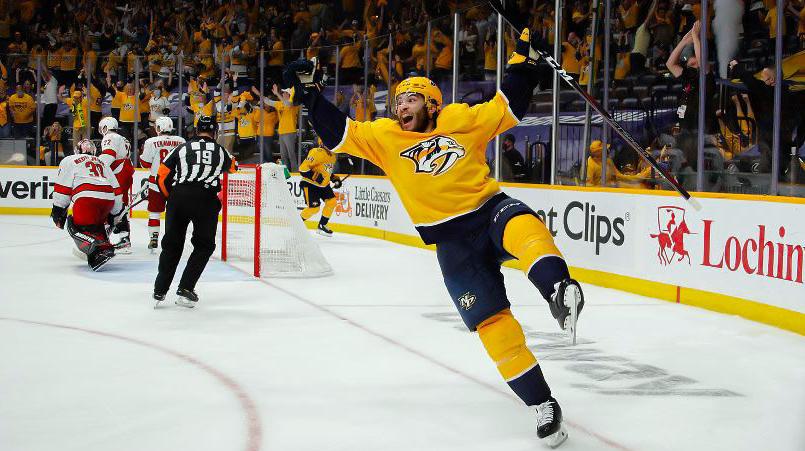 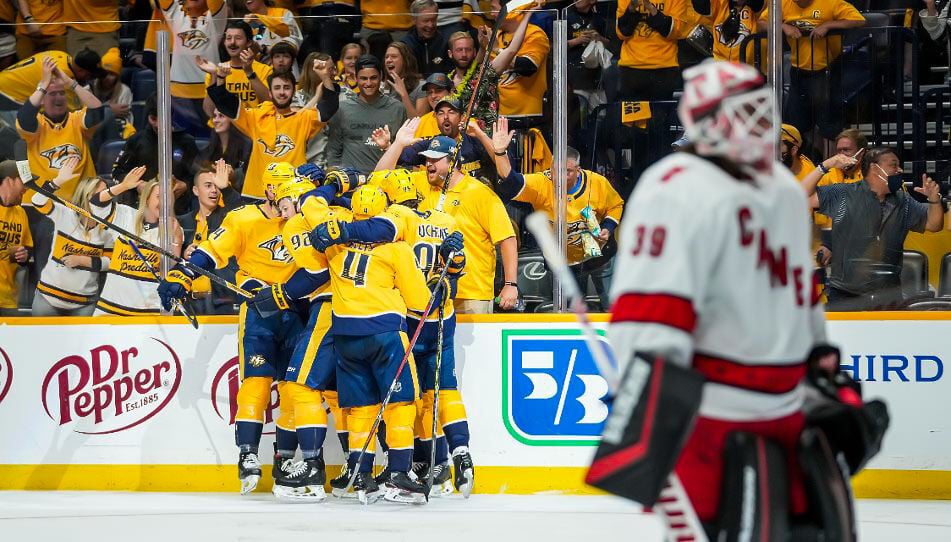 It took Nashville Predators forward Luke Kunin just 57 seconds to score his first goal against the Carolina Hurricanes in Game 4 at Bridgestone Arena on Sunday.

The 23-year-old forward had to wait exponentially longer for his second. Ninety-five minutes and 13 seconds, to be exact.

Kunin, who found himself without a stick as the second overtime period dipped below the four-minute mark, raced over to the Predators’ bench, where he was met by the quick-reacting equipment manager Pete Rogers.

Rogers passed along a fresh stick to Kunin, who skated uncontested into the Carolina zone, splitting the faceoff dots where Mikael Granlund found him all alone and fed him a pass that he one-timed stick-side past Hurricanes goaltender Alex Nedeljkovic for the 4-3 double overtime win that tied the series 2-2.

It was the fourth-longest amount of time between goals by the same player in NHL history. Kunin now leads the Predators in hits (19) and is tied for the most goals (two) and fifth-most shots (10) in the postseason.

“We actually gave Pete a round of applause after the game,” Predators coach John Hynes said. “A veteran equipment manager, he’s been around and (was) plugged into the game. (Kunin) breaks his stick, Pete jumps back… he’s high stepping it back to the stick and gets it right away and gives it to (Kunin)… It was a heck of a play by Granlund to find him there. So tip of the cap to Pete Rogers, for sure.”

While Kunin may have had his coming out party, Sunday’s game was just the latest example of how good the Predators can be with Juuse Saros between the pipes.

After making a career-high 52 saves in Friday’s double overtime win, Saros topped himself with a franchise-record 58 saves on Sunday. He became just the second player in NHL history with back-to-back games with 50 or more saves.

Through four games, the 26-year-old has faced the most shots (184) and made the most saves (171) of any goalie in the playoffs. He also has the fourth-best save percentage (.929), and he is tied for the fifth-best goals-against average (2.52) of all goalies to start four or more postseason games.

"He's a stud," center Ryan Johansen said of Saros. "He's a big part of our team success and our ... winning these last two games. He's going to keep doing his thing and we're going to keep counting on him."

Now, Nashville — which appeared to be on the verge of a quick playoff exit after falling behind two games to none — has Game 5 in Carolina on Tuesday, Game 6 in Nashville on Thursday, and if necessary, Game 7 in Carolina on Saturday.

While the Predators may not like the idea of being the underdog in the series, they certainly seem to play their best hockey with their backs against the wall. It worked for the final 28 games of the regular season, and now, it appears to be working just the same.

“I think that’s just how our group is made up,” Johansen said. “Since Day 1, we’ve loved the character in our room. We know there’s no quit and the resilience is showing when we need it most.”