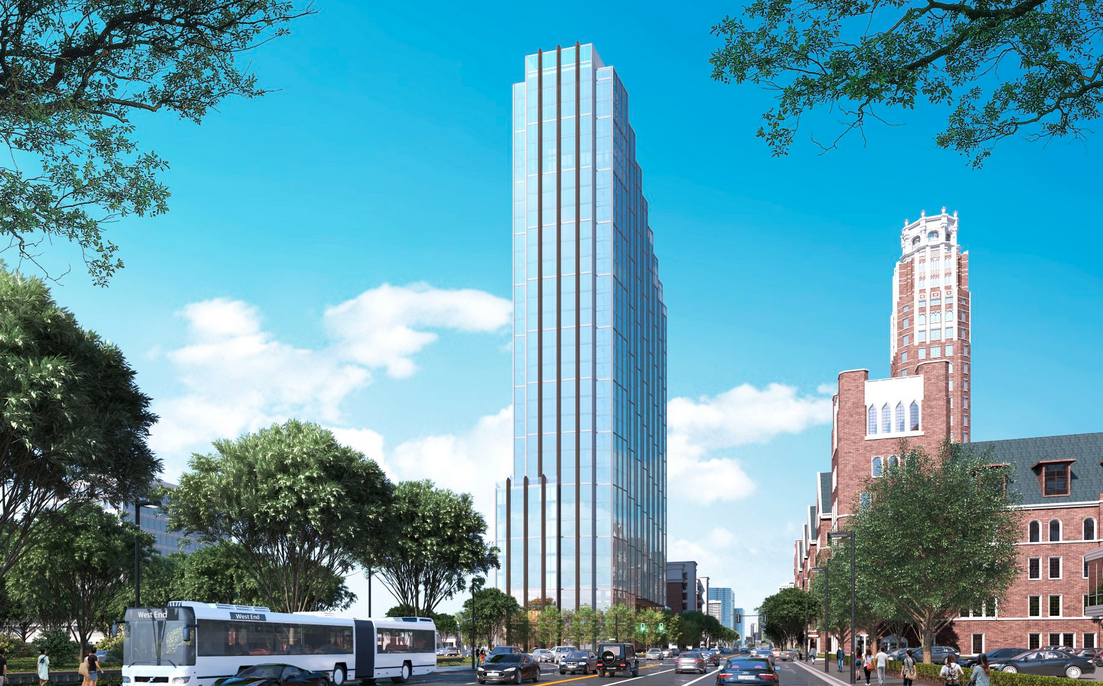 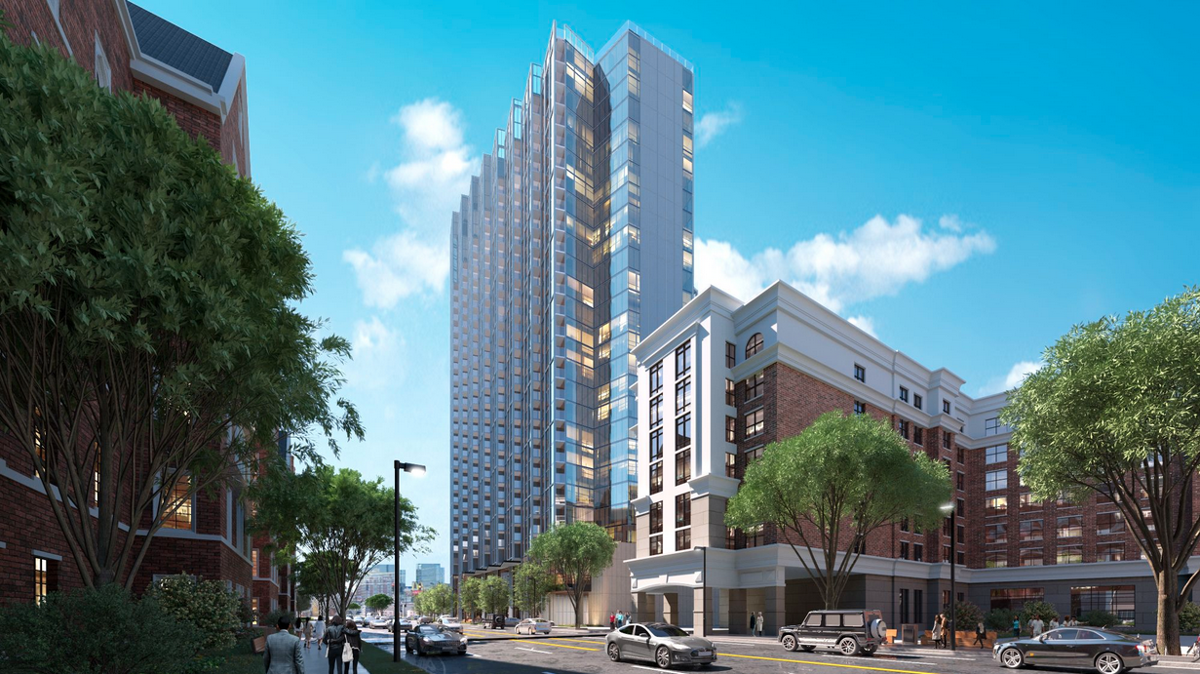 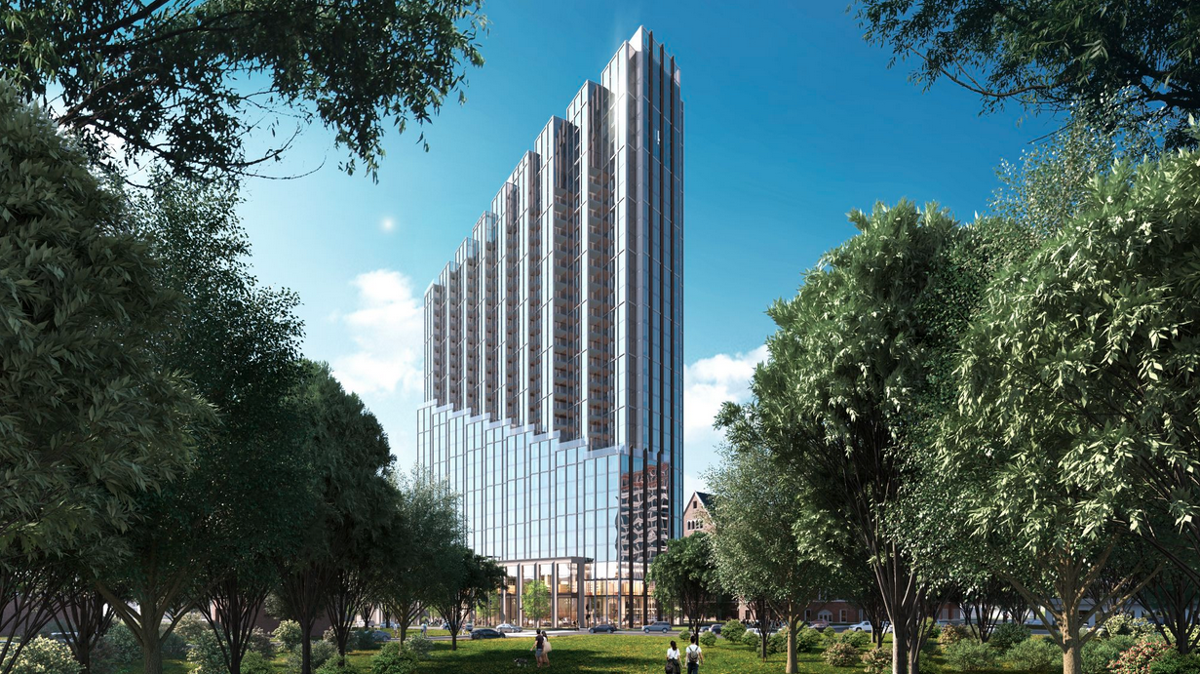 Images have been submitted to Metro of a mixed-use tower planned for the Elliston Place and West End Avenue split — with the future 27-story tower to be bathed in glass and offer a neo-art deco design.

A multi-page document submitted to the Metro Planning Departments notes Brentwood-based GBT is seeking preliminary specific plan rezoning. The working name of the tower is 2416 West End Ave., the main address of the site. Nashville-based Gresham Smith is the architect.

As the Post recently reported, the tower will include residential units and ground-level commercial space and rise approximately 375 feet. If standing today, the high-rise would be the tallest building in Nashville located west of 21st Avenue and would loom large over nearby Centennial Park. For comparison, the Gothic collegiate high-rise (for which work on the exterior is finished) on the Vanderbilt University campus stands about 300 feet (that tower is seen on the right in the above image).

The art deco structure currently located at 2416 West End — sometimes called the Firestone Building — accommodates a Smoothie King and was previously home to a Rite Aid. It will be razed for the project. GBT paid $8.1 million for the property last December.

The company's proposed tower also will rise from a footprint that includes the buildings home to Rotier’s (which has been closed since early this year), Emma’s Flowers and Gifts (which is closing) and Gyros Kitchen Greek cafe & Taverna. GBT has those properties, which collectively span 0.87 acres, under contract.

Firestone operated from the Firestone Building, which is roughly 90 years old, until 1983 and was eventually replaced by Eckerd Drugs in 1985.

The future project, as GBT envisions, would include a small green space at the split, some below-grade parking and vehicular access via a new two-way street connecting Elliston and West End on the east side of the footprint.

GBT will go before the Metro Planning Commission on July 22 to request the specific plan zoning for the land, which is currently zoned commercial. The property sits within Metro Councilmember Brandon Taylor’s District 21.

Fiona Haulter, GBT vice president of development, said in a release the company’s goal is to deliver “an iconic and original design” that is worthy of a “gateway location.”

“We have worked closely with neighbors … to deliver a vision that is … additive to the area,” she said. “This will be an activated urban realm highlighted by ample sidewalks, a dedicated porte-cochere, two-story retail and [outdoor] dining opportunities.”

Brian Hubbard, Gresham Smith senior architect, said the design of the tower “utilizes strong lines, texture and dynamic form to create slender verticality and movement within the sky — a nod to the art deco aesthetic that came before it.

“The building’s sawtooth and terraced features create purposeful movement throughout its height, further ensuring a design that is an exciting, original and memorable addition to Nashville,” he added.

Other companies participating in the project include Nashville-based Ragan Smith & Associates (civil engineering) and Young-Hobbs & Associates (surveying) of Clarksville.

GBT also is developing a downtown Nashville site at 13th and Broadway with high-rise ONE22ONE and is redeveloping a Murphy Road property with a combination hotel, retail and residential building called Parke West. The company is now proposing mixed-use condominium tower Eden House for Green Hills.