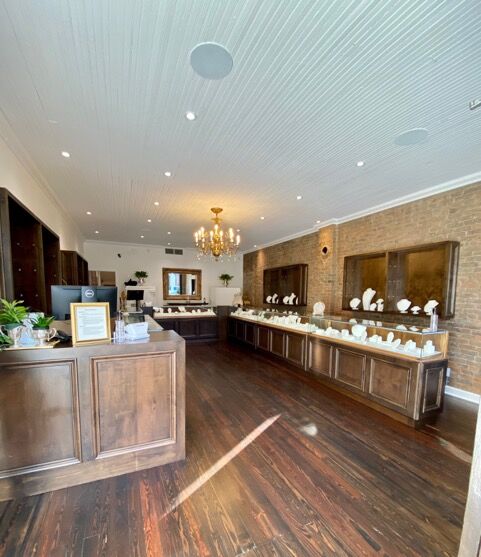 Renovations at Walton's Antique Jewelry revealed the building's original bead board on the ceiling, brick wall and hardwood floor. 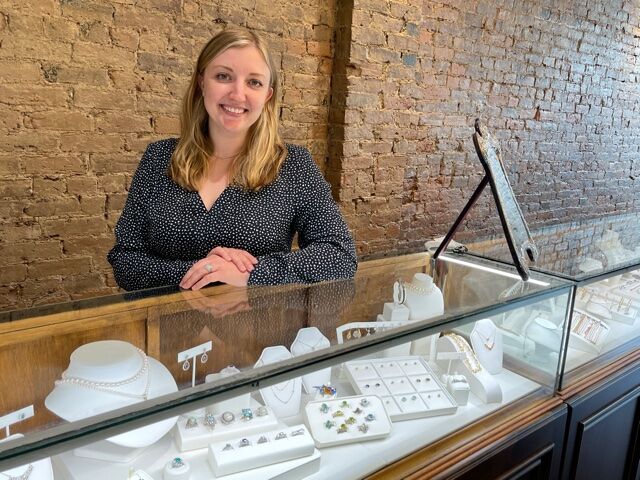 As renovations on Walton’s Antique Jewelry in downtown Franklin got underway a few weeks ago to improve the business for the future, owners and staff came upon a few discoveries from the past.

Nearly half a foot of material was pulled to reveal the original brick wall from the building that dates to 1898. The original beadboard in the ceiling also came into view as work progressed. And found on the floor beneath one of the display cases was a diamond eternity band that had fallen through the cracks about six years ago.

“But the original hardwood floors were the biggest surprise,” said Julie Walton Garland, who took over operation of the business after her father, Mike Walton, retired. “We uncovered multiple layers of subfloors, carpet and hardwood to get to these beautiful red pine floors. They were in great shape for the most part.

“It took a little more work to restore them where they’d be usable, but it was worth it.”

The newly renovated jewelry store has reopened after having closed for about 2½ weeks while extensive updates were made. A fire next door at the Red Pony restaurant in late January didn’t do any damage to Walton’s, but it did expedite the remodeling project.

“We were already planning to do a remodel at some point this year,” Garland said. “We had done small upgrades along the way, but nothing overall. So it was time to do a total update and create a better flow.”

Walton’s Antique Jewelry dates to 1974, when Garland’s grandmother, Melba Walton, opened a shop in the old Carter’s Court shopping area on Columbia Avenue after having sold her jewelry at flea markets. Eight years later, in 1982, Walton bought the building at 410 Main St. and built a base of both repeat customers and newcomers alike.

“We have two or three customers who started with my grandmother when she didn’t even have a store yet,” Garland said. “She was just selling at flea markets. And paired with that, we have a lot of generational customers as well — older customers whose children and grandchildren are now shopping here.”

The store might specialize in pre-1940s jewelry, but it’s very much in the 21st century by launching online shopping in 2017 and becoming quite active on Instagram and Facebook. That especially came in handy at the start of the COVID-19 pandemic and in the time the physical location closed for remodeling.

“A lot of people use the website to see what we have before they make the trip down here,” Garland said. “That really helped us out last year when things shut down. We were able to still keep on trucking and kept my entire staff on board for those two months we were closed.”

Garland, who joined the family business in 2012 after graduating from the University of Colorado and working for a while in the wedding and event industry, said even with the convenience and benefit gained from modern technology, there is nothing like the physical presence of brick and mortar and display cases.

“Not only are we in historic downtown Franklin, but we deal in antique jewelry,” she said. “So we really love to try to preserve all of that as best as we can.”