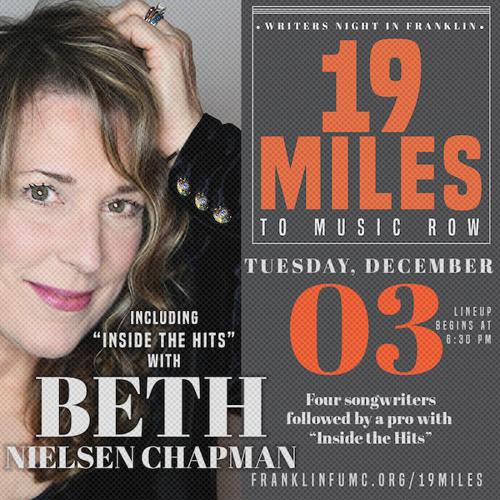 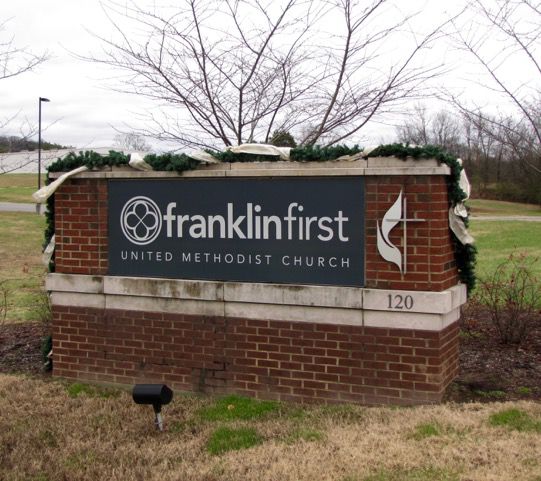 Singer-songwriter Beth Nielsen Chapman, who has written seven No. 1 hit songs for a variety of artists through the years, is the featured performer at Tuesday night’s 19 Miles to Music Row at Franklin First United Methodist Church’s main campus just north of downtown Franklin.

Chapman, who has recorded 13 solo albums and been nominated twice for a Grammy Award, will sing some of those songs as well as others, plus weave a few stories in between, during the segment known as “Inside the Hits.” Her top songs have been recorded by artists such as Elton John, Neil Diamond, Bette Midler, Bonnie Raitt, Willie Nelson, Faith Hill, Michael McDonald, Waylon Jennings and Indigo Girls, among others.

In addition to the main act for the event that is held at the church the first Tuesday of each month, 19 Miles to Music Row also serves as a writers night for Nashville-area musicians and songwriters. Tuesday’s writers are Michelle Pereira, Tom Golly, Jon Mullins and Krystal King.

“19 Miles to Music Row is a true writers night that invites four great songwriters to the stage to perfect their craft and hone their skills in front of someone who’s been there,” said Jody Todd, marketing and communications director for Franklin First. “It’s a fantastic night out, and we’re delighted to be able to offer such a unique event to our community.”

Tickets are not required to attend, but seating does fill up. Click here to learn more about 19 Miles.