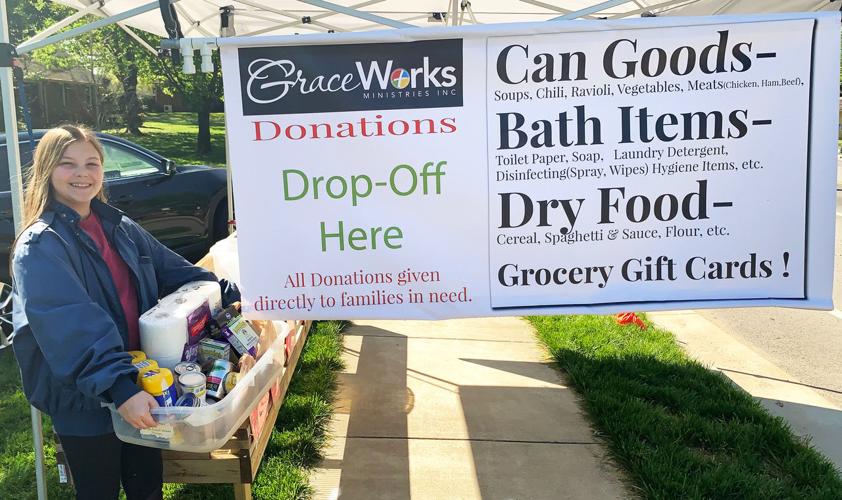 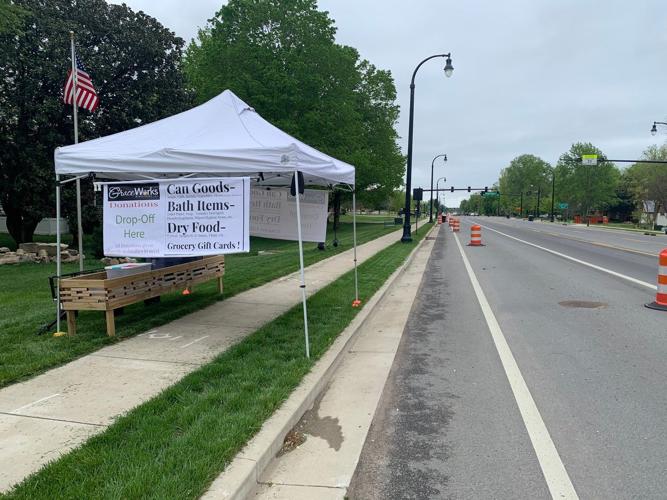 Even with little traffic, food donations after the first day of the site at Kevin and Suzette Wimpy's home totaled 414 pounds.

Even with little traffic, food donations after the first day of the site at Kevin and Suzette Wimpy's home totaled 414 pounds.

When Kevin Wimpy decided to make his home a donation site for food and other items that would go to GraceWorks Ministries, he thought he might see the occasional passer-by stop with a few canned goods, bath items or boxes of mac and cheese.

He was mostly just hoping the tent and banners he had placed in the front yard of his home on Hillsboro Road in Franklin would inspire people to donate to the 25-year-old ministry, especially during the extra time of need in the COVID-19 pandemic. After all, he and his wife, Suzette, and daughters live on a fairly busy street near Franklin High School and an intersection of Mack Hatcher Boulevard.

Wimpy was ready for donations Monday afternoon, and within 24 hours he was inundated with all manner of items and a plethora of kindness.

“I honestly thought it may just raise some awareness or something,” Wimpy said. “I didn’t know that people would really plug in like they have. We’ve been overwhelmed with how many people have donated in just a day or two. I think people are going to the grocery store and see the banner that says GraceWorks, and so they pick up a few extra things and drop off here.”

The first day of donations from Wimpy’s drop-off site totaled 414 pounds, according to Alicia Bell, director of Development for GraceWorks.

“That’s awesome for us,” she said. “That’s going to help our food pantry significantly.”

Wimpy, whose home is also where he has a studio and portrait garden for the photography business he has owned since 2002, said he has admired the ministry of GraceWorks for some time and wanted to help in some way.

“It’s just easier for people to pull in here and drop a bag off than having to drive across town and finding the [GraceWorks] warehouse,” he said. “We had no idea people would respond like this. We’re just kind of shooting from the hip as we go. It’s been so incredible.”

Bell said others throughout Williamson County have found creative ways to bring aid to GraceWorks in this particularly challenging time.

“We definitely have had a good response from the community,” she said. “Companies have done food drives and individuals drop off what they can. We’ve see a few things kids have done as they’re looking for something to do. One child sold cookies and gave proceeds to GraceWorks.

“We’ve heard story after story of how the community has stepped up and helped us fill the shelves.”

In Brentwood, Elizabeth Privett is stepping up by making a Firehouse Subs on Old Hickory Boulevard a donation site. She and her family are involved with GraceWorks through the church they attend, Brentwood Baptist Church, and she thought she could do even more.

“I just have a heart for GraceWorks,” Privett said. “I think they’re an amazing ministry, and I felt like I needed to do something.”

She expects to have the sandwich shop ready to accept donations by Monday, and hopes people will consider picking up a few extra items to donate as they go to a grocery store.