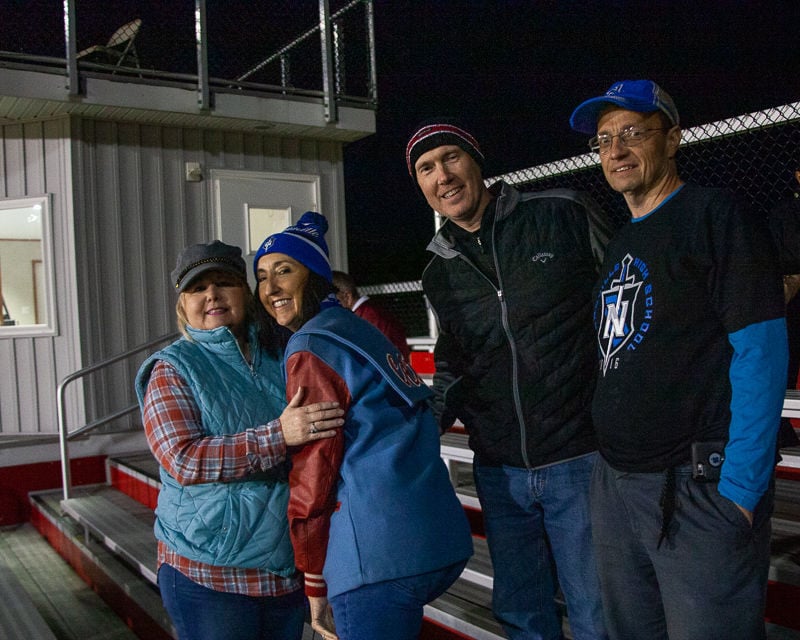 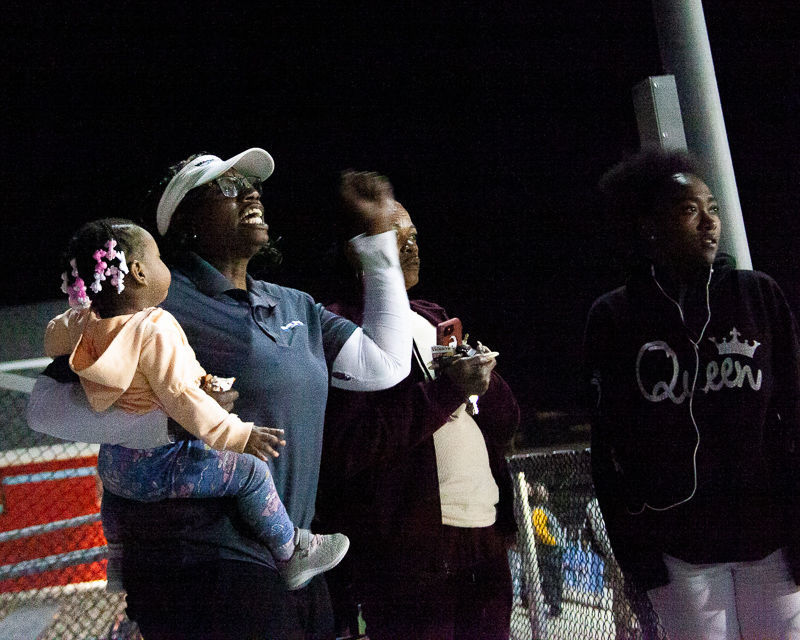 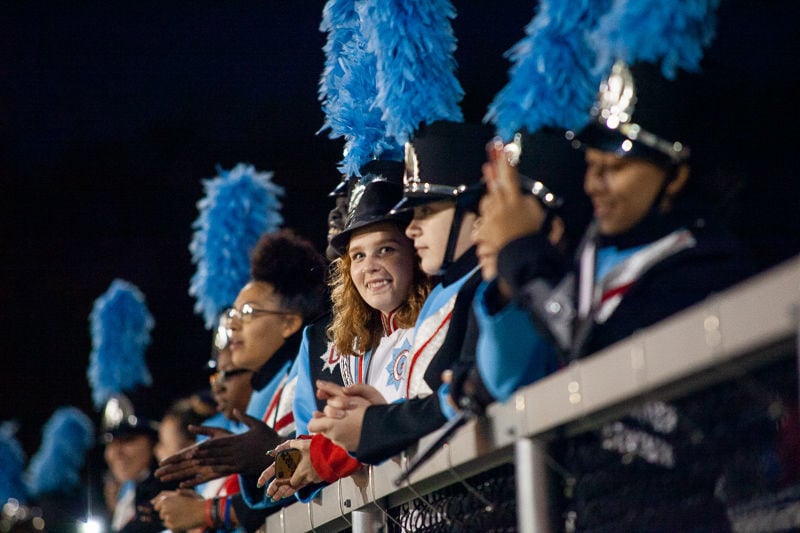 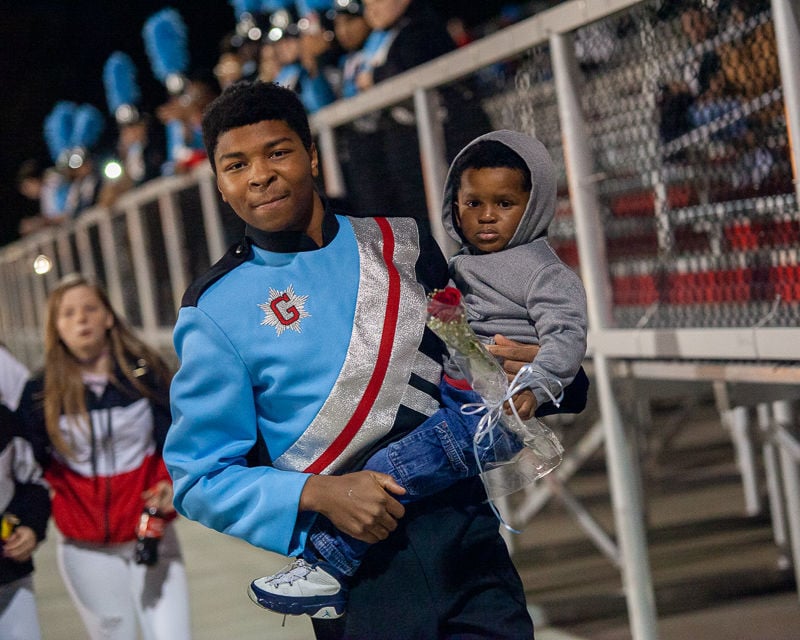 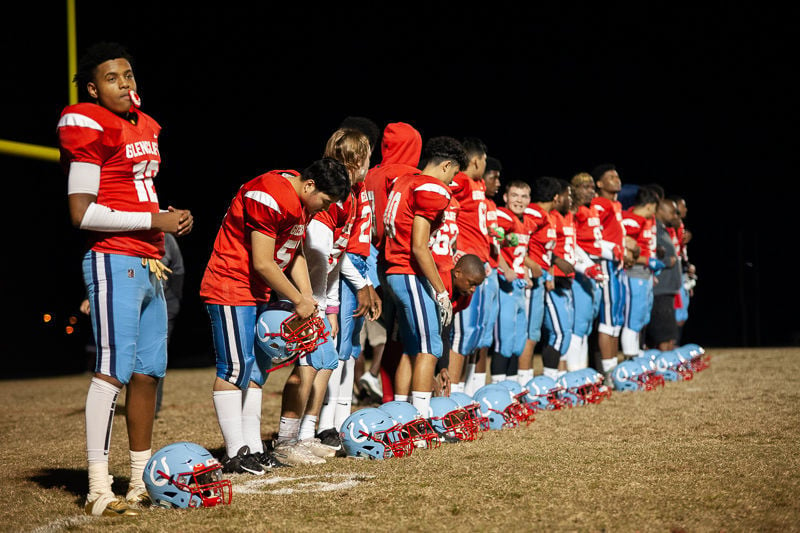 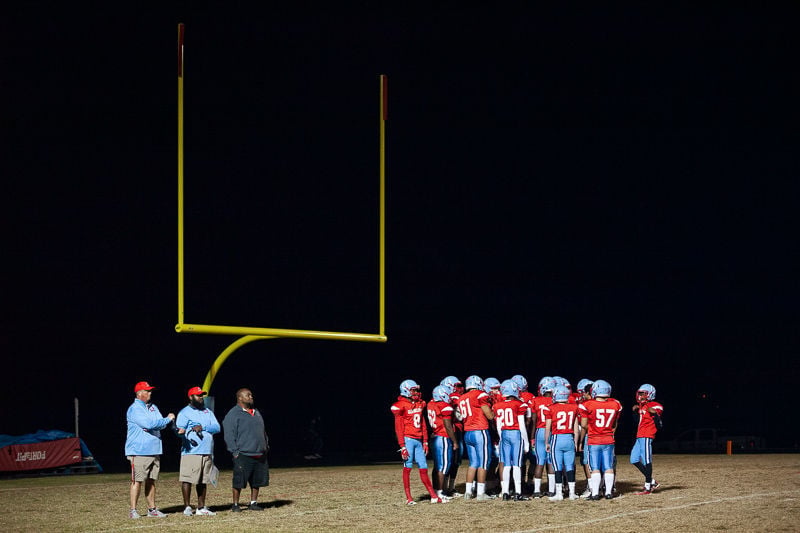 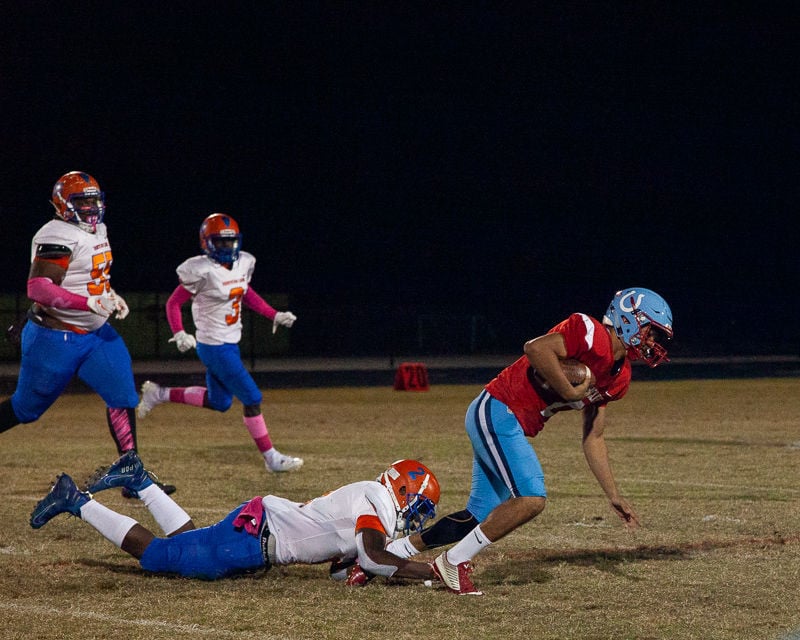 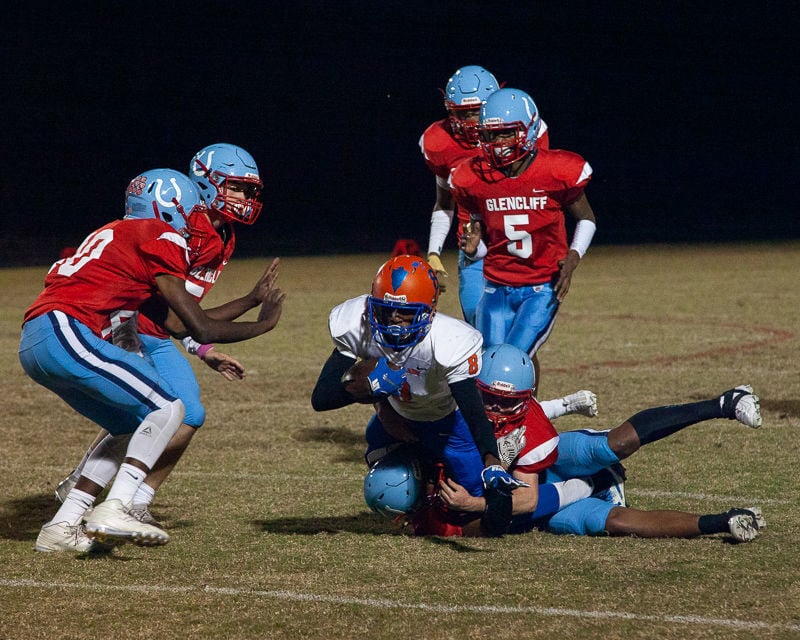 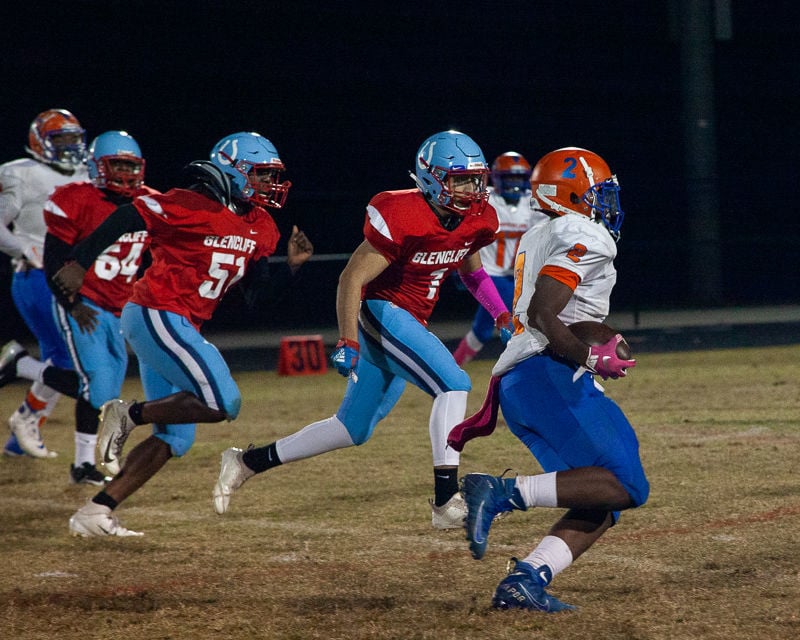 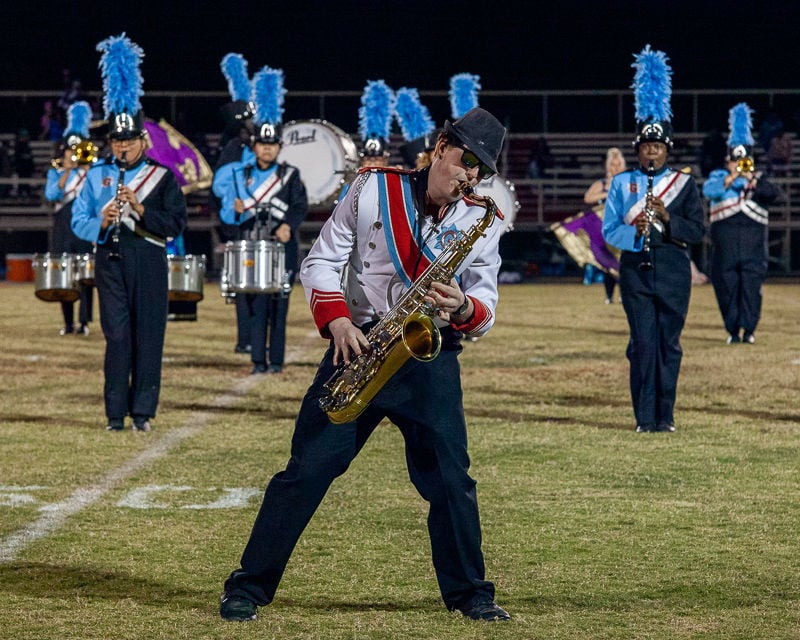 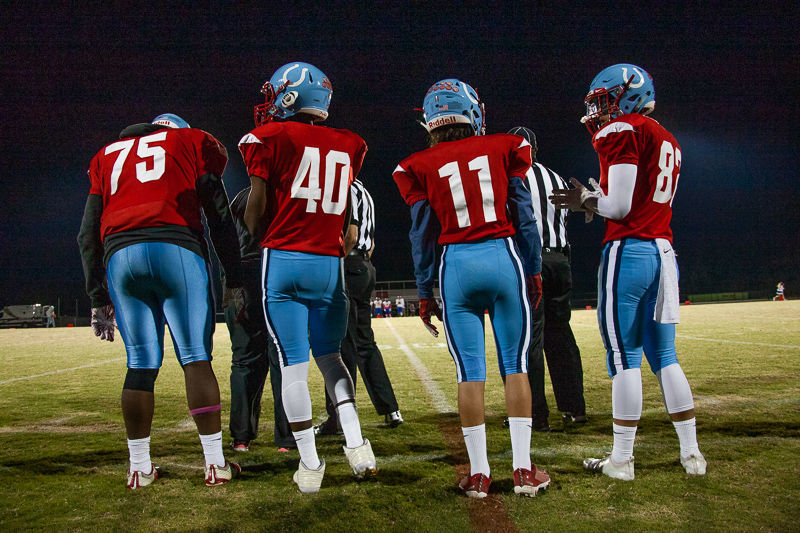 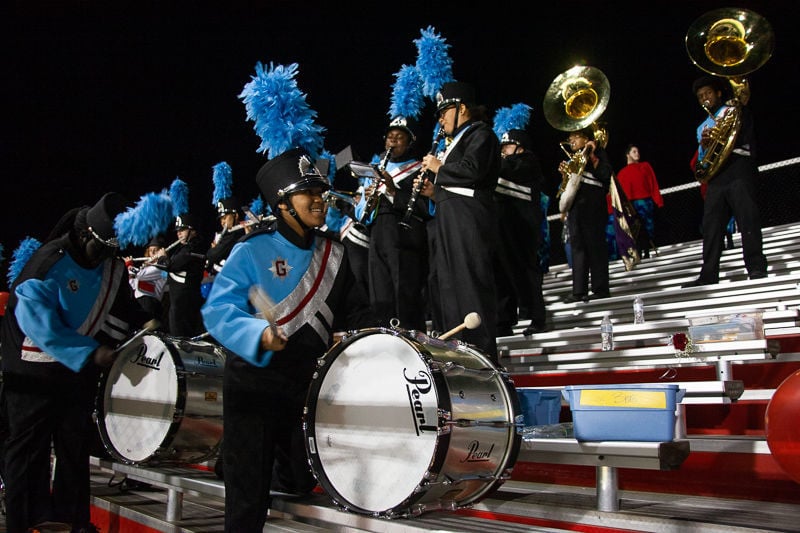 The nearby Glencliff High School Colts have had a struggle of a football season with the announcement of a season forfeiture and a quick reversal of that decision in early October.

The team's roster sits below 20 and they've yet to win a game this year.

Though, the Colts' struggles have not been missed by the Glencliff community or the communities of rival teams.

One of those communities is Nolensville, who saw some residents step up and support the Glencliff Colts during their Thursday night game against Hunters Lane.

While the Colts did suffer a 53-8 defeat in stadium with few fans, they left the field knowing that the fans who showed up had their backs, even if some of those fans were sporting blue Nolensville Knights apparel.

Nolensville residents Anita and Randy Fowler were joined by Anita’s cousin Kathy Deshotels to cheer on the Colts.

This was the first time that the two alums have returned to their alma matter for a game after learning of the struggling program when they played Nolensville last Thursday.

Fowler and Deshotels remembered their time at Glencliff games in the ‘80s as the place to be on a Friday night, a community and atmosphere that they likened to the Nolensville of today.

“We heard that they’re in jeopardy of losing their program and you want them to have that. You don’t want to see that happen to your alma matter especially, but this is really for the kids,” Fowler said. “The kids need support, and if I could have brought all of Nolensville here to cheer for them, I would have.”

Another Nolensville resident, Kevin Bartz, said that this show of support is something that helps make Nolensville the community that it is, support that he said he hopes more people will continue to show in the future.

“I just wanted to pay my respects to them for sticking with it and being persistent and keeping that determination and sportsmanship going. They came out and played us last Thursday, and I know it was tough for them,”  Bartz said.

Antioch resident Mahogany Johnson was cheering on the team from the stands while her son, Glencliff safety Kavin Monger, battled it out on the field.

“We’re out here to support our kids and to let them know that you’re going to get disappointments, but if you’ve got those closest to you supporting you, you can get through anything,” Johnson said.

“I grew up in a town where the neighborhood actually did help take care of every kids, and despite their record, they are great kids and talented kids so to be here screaming is the only way for them to know that.”

Johnson said that she and the whole Glencliff community was happy to see other schools and communities come out and support the Colts and knew that, despite the ups and downs of morale, the players were learning valuable life lessons.

“It’s tough, sometimes they get frustrated or angry, but the whole point is to teach,” Johnson said. “If you don’t lose, you don’t know what a win feels like.”

For Glencliff head football coach Mike Passen this means more than most could really know.

He said that he was made aware on Wednesday that some people from the surrounding communities wanted to show support for Glencliff when he was told that some Nolensville residents were wanting to help provide food for their Thursday night game.

“I was really kind of shocked because at that moment I had six different groups wanting to provide these guys meals last night,” Passen said. “What they did is they came in and provided some cupcakes for the guys.”

Passen stressed in a phone call that this show of support has given his team confidence and hope, a reminder that no one has given up on them or what they can accomplish.

“I know that with them calling and all throughout the Middle Tennessee area our kids have really taken that to heart and understood that they are not alone,” Passen said.

“As a coach, while it’s not about me, I definitely appreciated it because that’s where we’re trying to get them to understand that, this whole time, is that they are not alone...[there are] people out there that support you and we have to do what we need to do to get better and that no one is giving up on them and [they don't need to] give up on themselves.

"Just to see that and the kids knowing that they were there, they were very appreciative.”

The Glencliff Colts will play against the Gallatin Green Wave in Gallatin on Friday, Nov. 1, to close out the season.

For Nolensville coffee shop and restaurant Mama’s Java Café owner Melissa Hall, a batch of fresh cupcakes was a way to honor a football team who needed some hometown love and support.

Some in the Nolensville community noticed that a recent Nolensville football game, visiting Glencliff didn’t have much of a turnout with its fan base. The team lost by a wide margin that night and nearly cut its season short before that contest.

For the team’s final home game Thursday night against Hunter’s Lane, Hall and others wanted to give Glencliff something out of that Nolensville game they probably didn’t expect to have: new fans.

“This is Nolensville; we do our thing,” she said. “We try to take care of other people. So we kind of rallied [to support the team]…Nolensville does have a big heart.”

Word spread on the Facebook group Nolensville 411 about what might be possible to do to support the short-staffed, struggling Glencliff.

An inquiry for providing meals showed that someone already had been gracious to fill that need, so dessert was next on the list of potential possibilities.

Hall said some Nolensville residents they had in the loop were Glencliff alumnus, and they helped coordinate with her and others to provide a treat for the football players and gather folks to cheer the team on in person.

The cupcakes, according to Hall, were in theme with the school colors.

Hall, who is a member of the Round Up For Nolensville board, says she feels the desire to round up support for the Glencliff team is just another example of Nolensville showing why it’s special place to live.

“It’s a different; it’s very tight-knit, and we like to take care of everyone,” she said. “They just need to know what the need is, and people just come out of the woodwork.

“I’ve lived in four different states, and there’s nowhere else like here.”