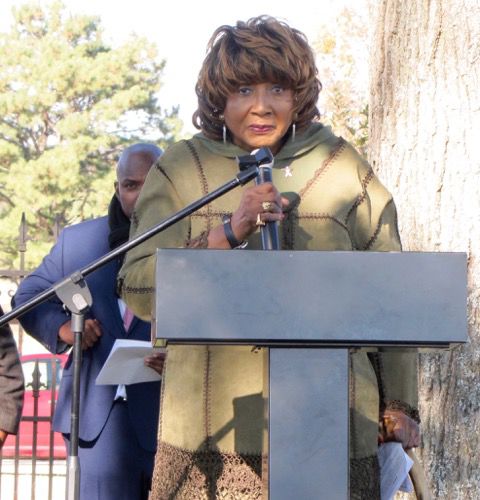 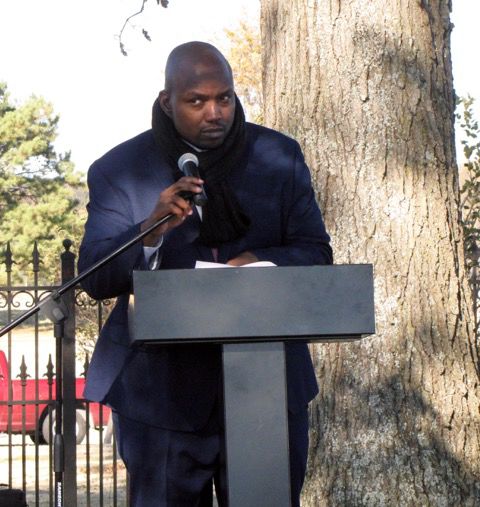 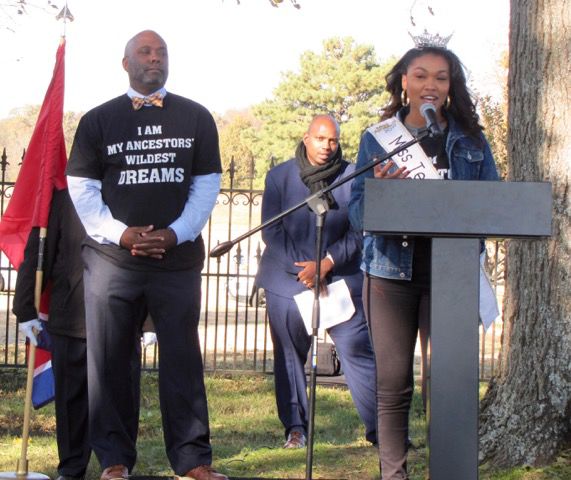 With her dad, Reggie Mason, standing to her right, Miss Tennessee Brianna Mason speaks about the support that has passed down from her ancestors who were enslaved. 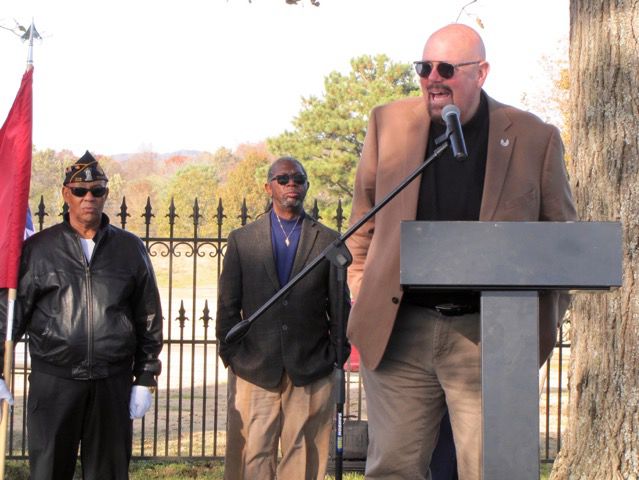 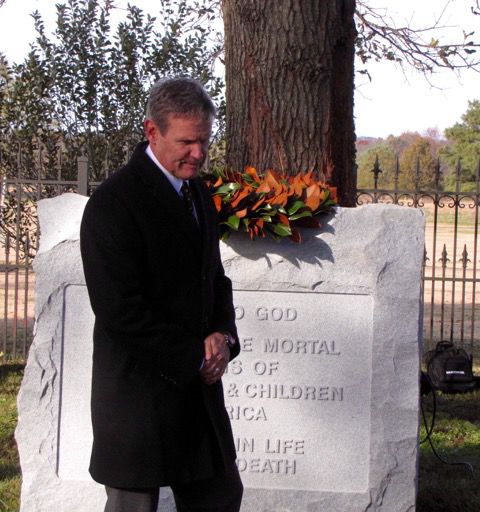 Gov. Bill Lee turns from the monument after he had placed the wreath on top of it during the ceremony. 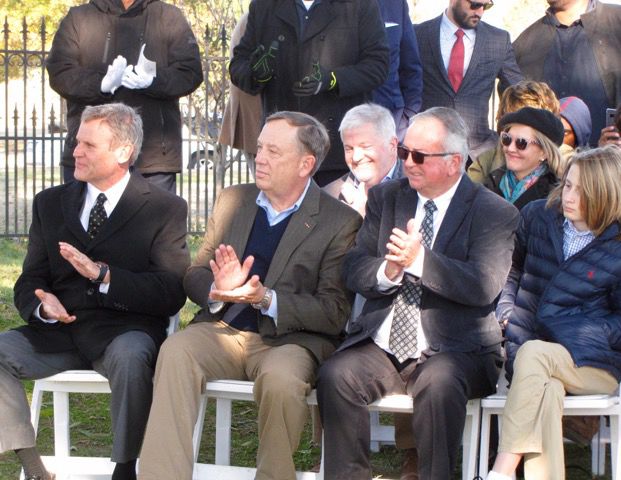 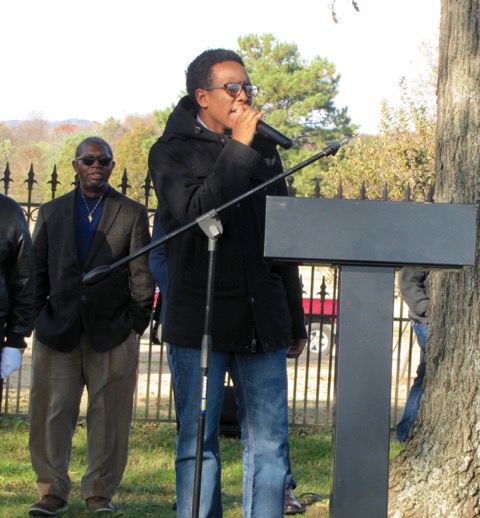 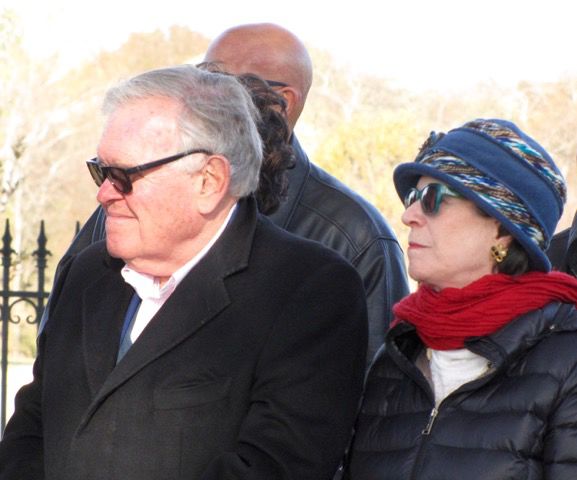 Rod and Kay Heller, descendants of the McGavocks, chose the location for the monument. 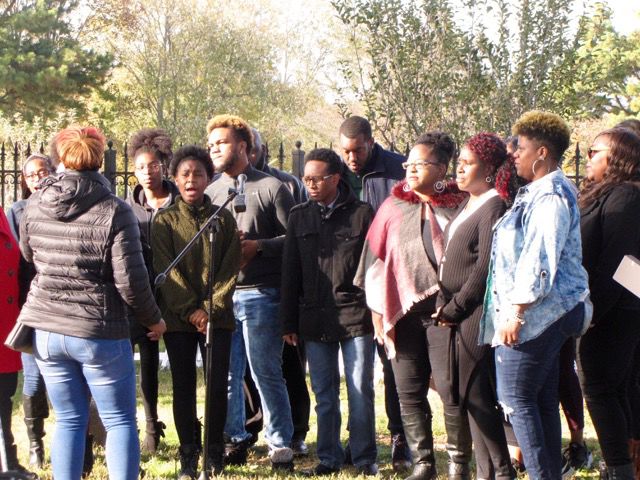 With her dad, Reggie Mason, standing to her right, Miss Tennessee Brianna Mason speaks about the support that has passed down from her ancestors who were enslaved.

Gov. Bill Lee turns from the monument after he had placed the wreath on top of it during the ceremony.

Rod and Kay Heller, descendants of the McGavocks, chose the location for the monument.

After the unveiling of the monument to the enslaved had ended at the McGavock Cemetery at Carnton Saturday afternoon, Lamont Turner had a brief moment to reflect.

An estimated 320 or more people attended the ceremony that was hosted by Franklin’s Charge and was presented as a program that reflected on the history and trauma of the enslaved people in Williamson County. It featured a wide range of speakers, and among the dignitaries attending was Gov. Bill Lee.

As guests mingled and music continued to play at the conclusion of the ceremony, Turner, chair of the unveiling and a Franklin’s Charge board member, stood near the monument along with his preschool-aged daughter and talked briefly about the significance of the day.

“That’s really what it’s about,” Turner said, pointing to his daughter. “It’s about a better, purer story for future generations, so we can get closer to our humanity. We’re more alike than apart, and every story that’s being told needs to reflect that.”

The stories and reflections that were shared during the hour-long ceremony spoke to the tremendous hardships endured by slaves as they were denied their freedom and dignity, and at the same time Saturday’s program brought a sense of renewal as the legacy of the enslaved was recognized as a new faith in humanity.

“Those whose humanity was denied were here,” said Dr. Eleanor Fleming, Williamson County native and member of the monument committee. “Their hands built and made, cooked and cleaned, planted and harvested, birthed and buried, tended to but never tended for, until now.

“Today we tend for them. We are called to our shared humanity with them, the enslaved African men and women and children, slaves no more. They were here. We are here. Lost in the shadows, previously buried in the weeds, they were forgotten. And yet we are called to remember, to witness, to cry out into this wilderness that they were here.”

Brad Perry, whose family spans nine generations in Williamson County and at one time owned 256 slaves here, said he has repented for his ancestors’ wrongs.

“Human beings were denied the rights of freedom, the rights to life, liberty and pursuit of happiness,” said Perry, who teaches high school African-American history. “I’ve repented for my family’s sins and the benefit and privilege my skin color has given me in my lifetime. It is appropriate to mourn our community’s past as we stand in this cemetery.

“In addition, we are also here to honor those who were truly oppressed. Historians often note that the North won the war, but the South won the narrative by continuing to perpetuate the lies that were made long before the Civil War even started. One piece of that narrative, that lie, stops today, right here in Franklin.”

Attendees also heard from Brianna Mason, a graduate of Ravenwood High School who in June became the first black woman to be crowned Miss Tennessee and will represent the state in the Miss America pageant in December. She talked of how her ancestors at Carnton were the catalyst for the life she leads today.

“I can surely say that I did not get here by myself,” said Mason, who was with her father, Reggie Mason, at the ceremony. “I got to this point with the support of my family, my friends and God — and also the legacies of my ancestors that came before me. They were so strong, so resilient and truly beat the odds. I am so glad that I’ve made them proud. I am my ancestors’ wildest dreams.”

Others speaking Saturday included longtime historian Thelma Battle, certainly one of Williamson County’s most meticulous researchers; Robert Hicks, author and historian who is president of Franklin’s Charge; Elder John Haynes, pastor of Burns Tabernacle; and Carolyn Worthy and Tangela Lane, who read the list of descendants.