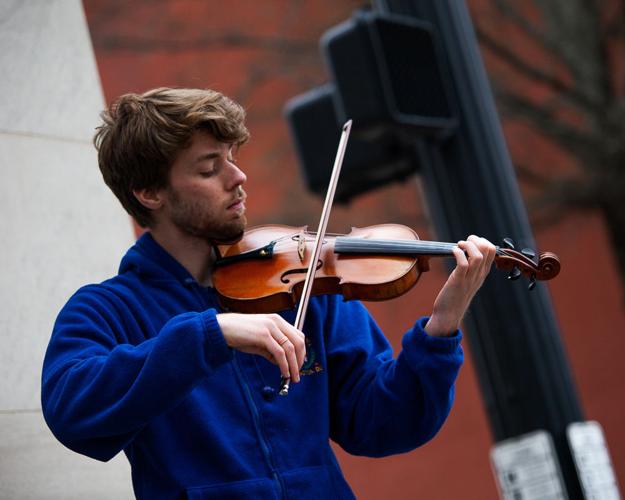 Isaiah Mitchell plays his 1913 French violin on the corner of 4th Avenue South and West Main Street in Franklin to nearly-empty streets during the mass shutdown of businesses due to the COVID-19 pandemic. 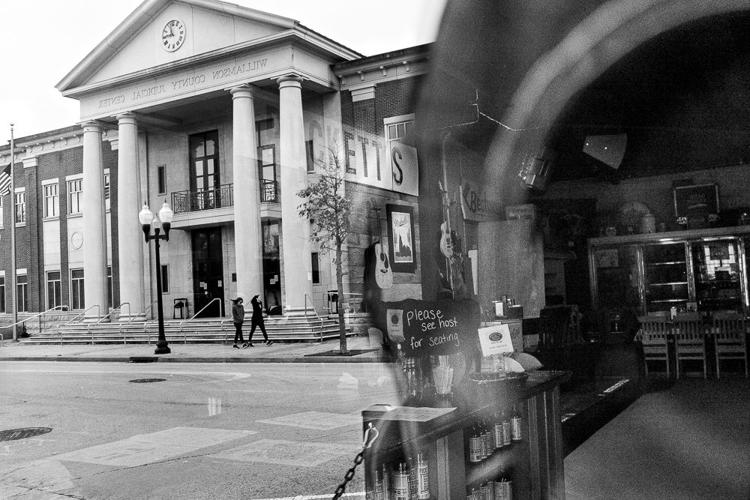 Puckett's Grocery & Restaurant in Franklin sits empty on a Saturday afternoon after the mass shutdown of businesses due to the ongoing COVID-19 pandemic. In the window two women walk the nearly-empty streets past the Williamson County Courthouse that has also stopped most operations out of public health concerns.

The streets of Franklin were mostly empty on Saturday afternoon with a few people walking the town square and peering in dark dining rooms of restaurants or cars pulling up for curbside pickup of pizzas — signs of the unprecedented impact of the COVID-19 pandemic.

While the streets were missing the usual chatter of shoppers, one familiar sound remained — a violin.

Isaiah Mitchell, 25, drew his bow across the strings of his 1913 French violin, bouncing sounds against the walls of empty buildings and earning smiles from the few people out on an afternoon bike ride or walking their dogs in a brief escape from the news cycle. Some people would even pull up in cars and roll down the windows for their children to listen to his songs before applauding as they drove away.

Mitchell has been busking just off the square since last fall. He does make enough money in four to six days a week on the streets to make it worth the time, but for Mitchell it’s not just about the chance to earn a buck or two, it’s about the chance for connection.

“On an emotional level sometimes you feel like, ‘OK, well is this even worth it or do people appreciate it?'” Mitchell said. “And then you have other days where your faith in humanity is restored and you say, ‘OK, maybe what I’m doing is worthwhile,’ and today is very much so one of those days because people feel like they’re emotionally in need of something and they have been expressive of ‘Thank you for being out here on a day like today,’ just in the midst of everybody having a tough week.”

Mitchell said that he’s mindful of practicing personal health and cleanliness, but had no regrets about posting up in “his spot” just off the square, adding that as the quarantine intensifies he probably won’t be out on the streets for the next week.

“I’m young and healthy so I’m not worried about myself but I also want to respect the idea of society trying to flatten the curve so that people that are older or more at risk of something long term that we don’t negatively impact them,” Mitchell said.

Mitchell said that he’s practiced music for many years before becoming a serious musician and songwriter about four years ago, a venture that especially on the street has its own unique rewards.

“Being out on the street for a dozen, two dozen hours a week gives you a real intimate perspective of a vast swath of types of people and individuals. You can see a change from day to day, how people interact and their mood based on the weather or things that are happening in the world,” Mitchell said. “For me it’s a means of telling stories to people and connecting people emotionally,” Mitchell said. "And that could be in any number of ways from encouraging people or making a little 5 year old want to dance a jig.”

Mitchell said that the street has a way of showing you what’s going on in people’s minds and lives, and as nearly every person has been impacted by ongoing pandemic, it was seen it in both the barren streets and in the smiles of appreciation of those who did pass by "his spot" on the corner of 4th Avenue South and West Main Street.

“Doing this on a day like today, that’s keeping the faith, let me tell ya,” a man said as he dropped a $5 bill in Mitchell’s open violin case that’s decorated with photographs and a wrist watch.

And although Mitchell can’t control who stops to listen to him play or who throws him a tip, he knows that he’s made “a day like today” a little bit better for the people looking for an escape and a reminder of what a normal Saturday on the Franklin square was and in time will be again.