Rob Rogers, who has been acting lead pastor at Franklin's Grace Chapel Church since Steve Berger's departure from the role earlier this year, addressed on Sunday recent allegations that church staff had ignored reports of abuse, calling them "blatantly and demonstrably false."

The allegations levied against Grace Chapel are just a small part of the allegations recently made against former WSMV Channel 4 News anchor Aaron Solomon, who has been accused by his 14-year-old daughter Gracie Solomon of sexual abuse and of being involved with the death of his then-18-year-old son Grant Solomon.

Gracie, whose family attended Grace Chapel, has alleged that her brother Grant had told then-lead pastor Berger — now founding pastor and church elder — of the abuse she and Grant had allegedly suffered at the hands of their father. That meeting between Grant and Berger, which took place on May 7, 2018, was later said by Berger to have only been about faith.

Furthermore, the author of a story published on the online publishing platform Medium has alleged that the church engages in "evangelical abuse." The author of that story, Shannon Ashley, has since received a cease and desist letter from the church demanding the statements be retracted.

The cease and desist letter also reads that Grace Chapel would proceed with further legal action were the statements not retracted by Monday, June 21. As of Monday, Ashley's story remains unaltered.

"We're not a perfect church"

During Grace Chapel's service on Sunday, June 20, Rogers told church-goers that he wanted to give them "an accurate read regarding the host of defamatory and slanderous comments that are being made about our church family."

"Recently, Grace Chapel has been referenced and inaccurately represented by multiple news sources, and you need to know that these news sources are making claims about Grace Chapel that are blatantly and demonstrably false," Rogers said.

"None of these news sources have ever - [not] one single time - reached out to any of our staff, our communications team, our elders for clarification on anything that they are publishing as truth. So it seems fairly obvious that the truth doesn't actually matter to the very people whose sole duty and responsibility is to investigate and report what is true."

Despite Rogers' claim that no news publication had reached out to Grace Chapel staff, the Home Page had reached out to Berger's assistant Elise Glasser on June 2 via email, six days before any of the allegations were published. Glasser responded the following day and declined to comment on the meeting between Grant and Berger given that it was "an ongoing investigation involving a minor child."

Rogers also touched on the cease and desist letter sent to Ashley.

"In regard to one of these sources, Grace Chapel did recently send a cease and desist order under the advice of our attorney as an appeal - not as a demand - as an appeal; not for the author to be silenced, but for the author to correct or remove the blatant falsehoods and defamatory comments that were made in the article," Rogers said.

"Again, this news source didn't reach out to us for clarification on any point before publishing any of the articles."

While Rogers described the cease and desist letter as an appeal rather than a demand, the letter, written by Larry Crain of Crain Law Group, includes the following excerpt:

"On behalf of my client, I am hereby making demand that you publicly retract these statements forthwith and that you cease and desist from making or publishing any false statements in the future regarding Grace Chapel."

Rogers then went on to read, in full, a written response from the church regarding the allegations, calling the claim that Grant had met with Berger to discuss the alleged abuse "categorically false." The full response can be viewed below. 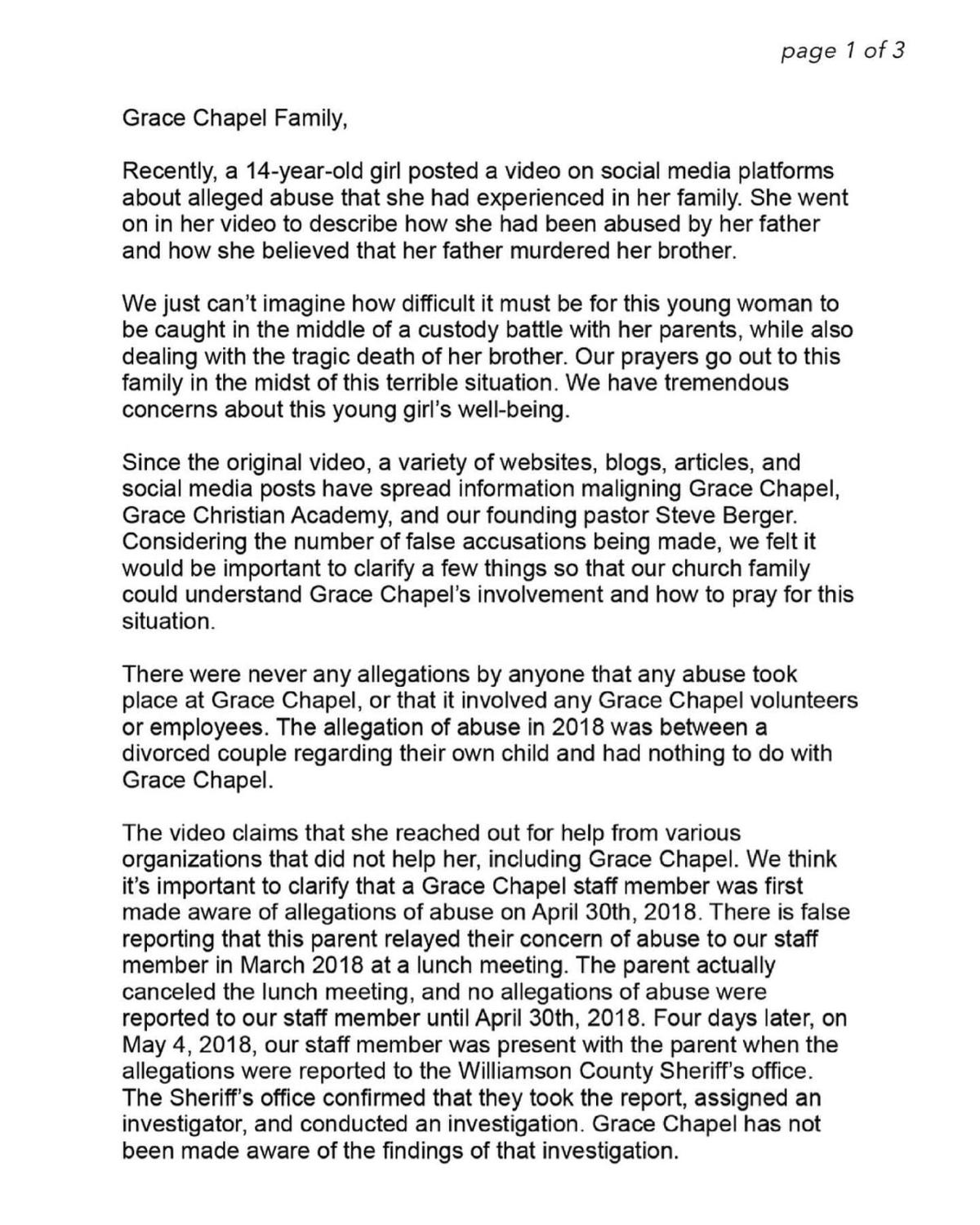 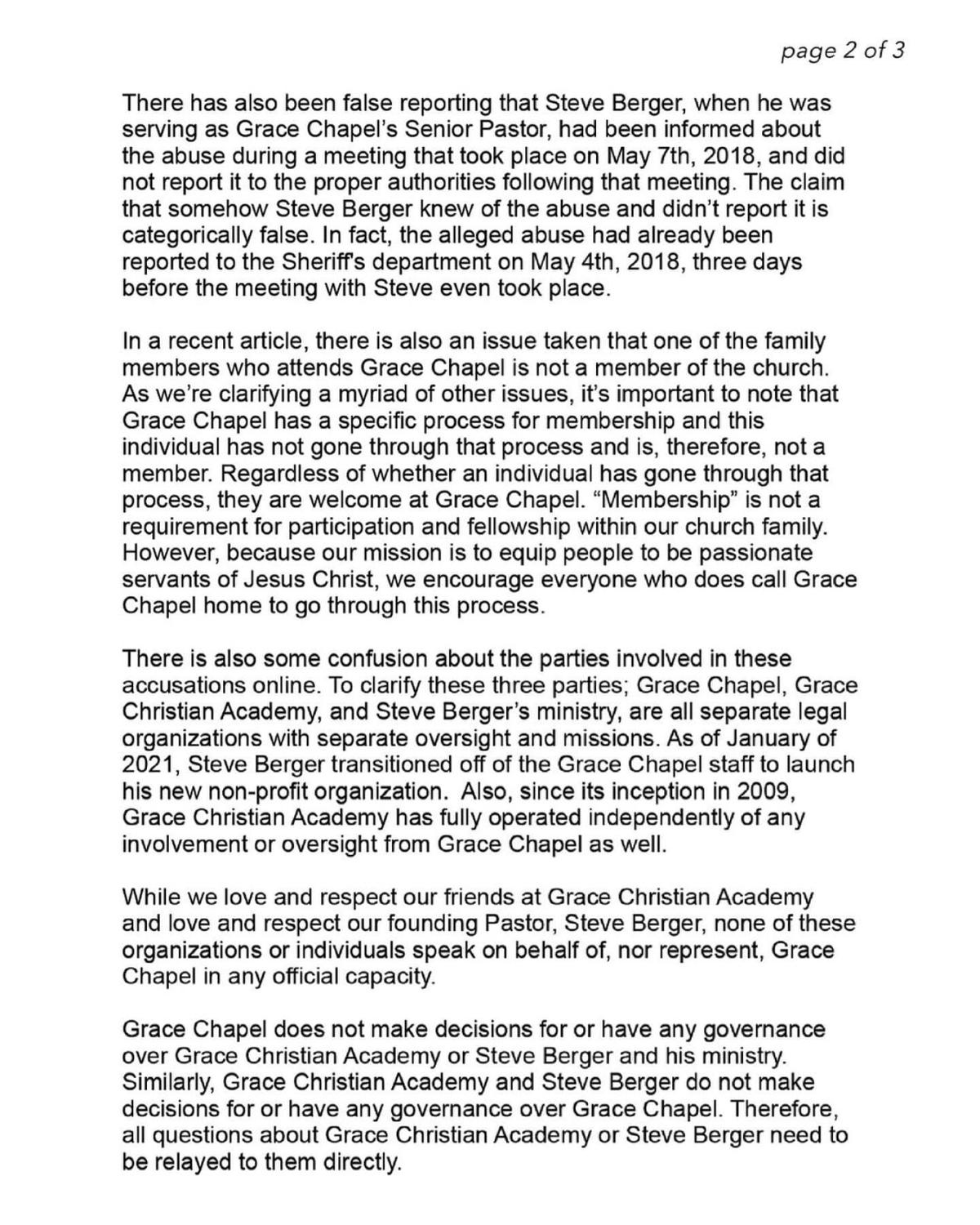 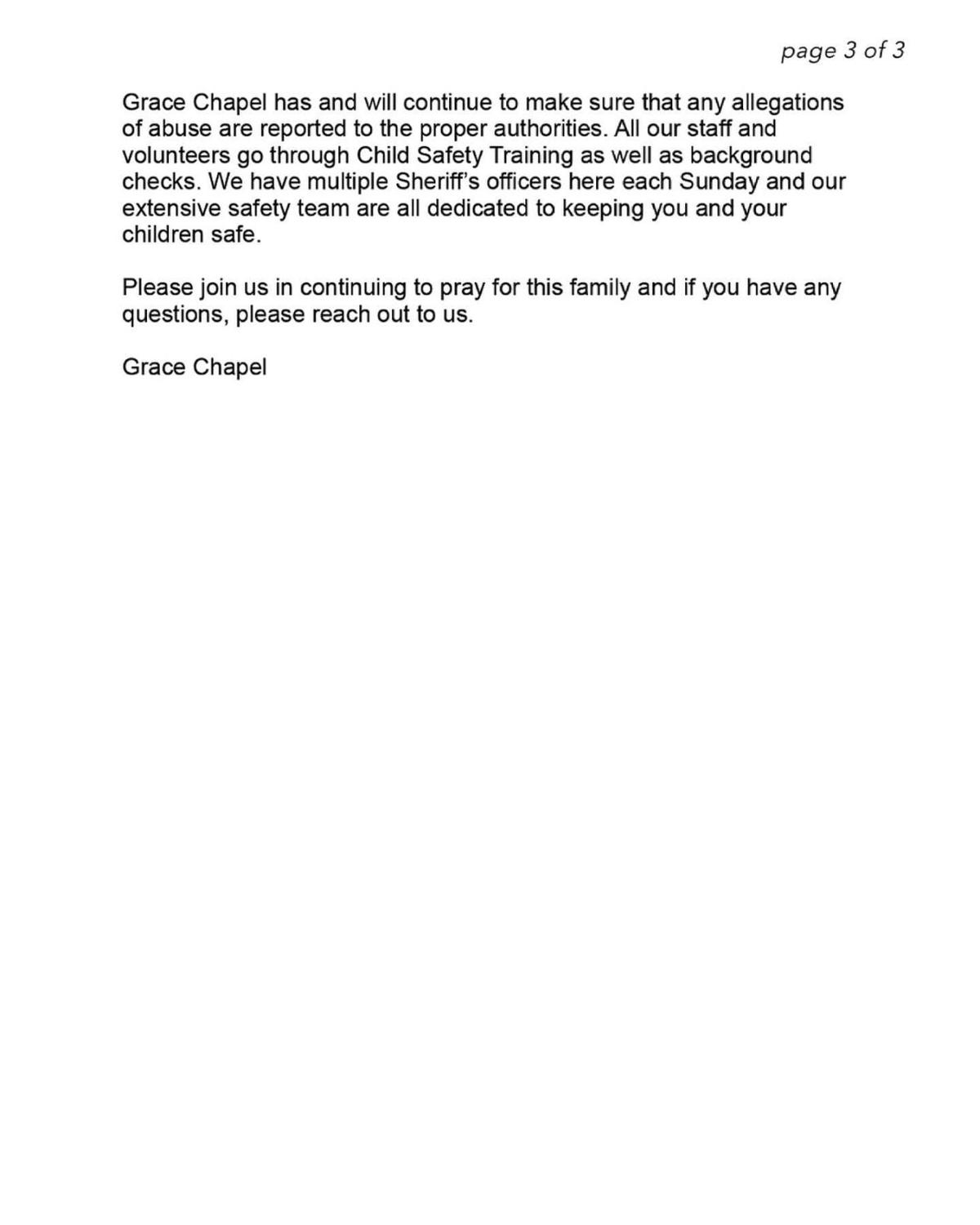 While acknowledging that the church had indeed sent a cease and desist letter to Ashley, Rogers asked his congregation to not "swing back" towards her and others reporting on the allegations, but to instead heed the words of Matthew 5:44.

"As much as it might feel good to rile the troops to swing back, that is not the example that Jesus set for us," Rogers said. "Jesus calls us to bless those who persecute us, to love our enemies, and we're committed to doing that."

The date in which Steve Berger and Grant Solomon held a meeting was incorrectly written as being May 4, 2018 in an earlier version of this story. The actual date was May 7, 2018. This story has been updated to correct this error.