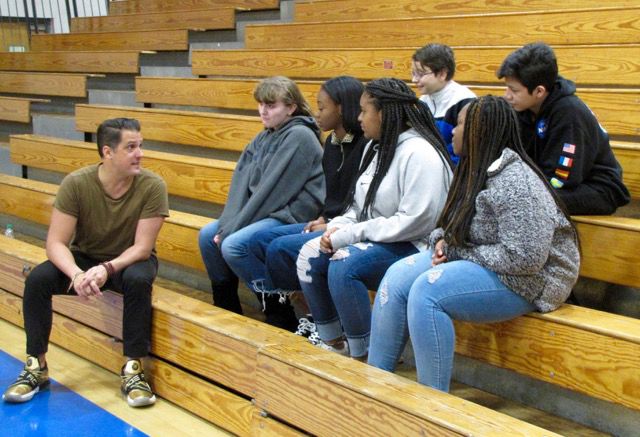 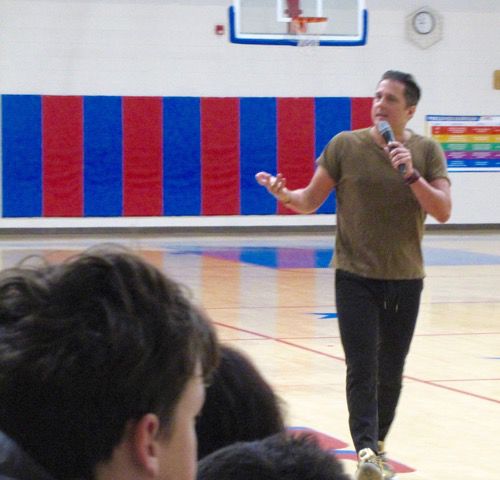 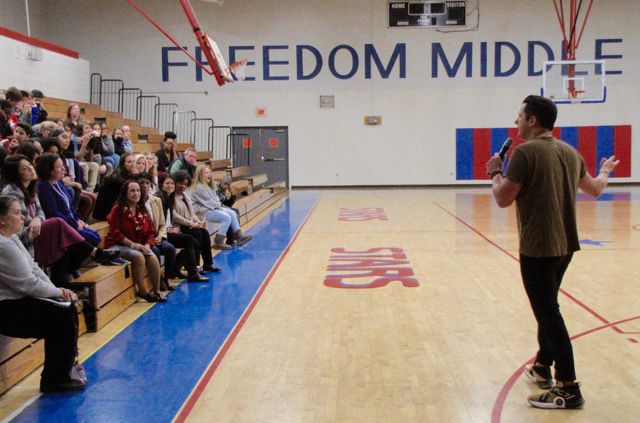 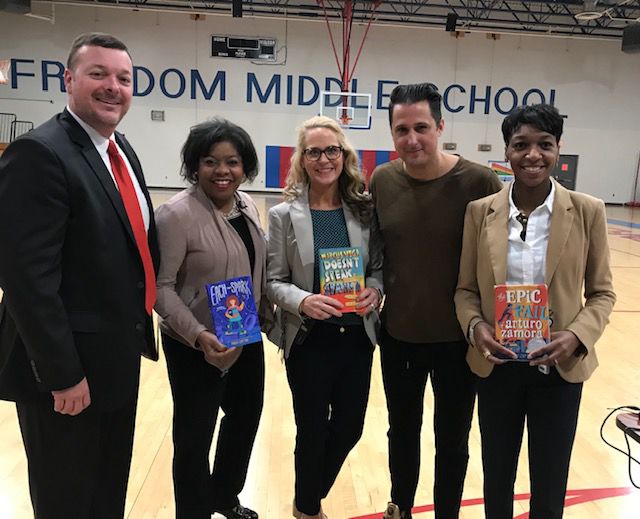 At the conclusion of author Pablo Cartaya’s presentation at Freedom Middle School Wednesday morning, the students who had assembled in the gymnasium were encouraged to place their hands over their hearts and to proclaim: “I have a story.”

“I have a story!” they repeated more loudly.

The affirmations could be seen as a fitting end to the 45-minute visit from Cartaya, the bestselling author of three young adult books who travels to tell his story at schools and colleges across the country. At Freedom Middle, he mixed humor with compelling stories of his Cuban American background and his journey to becoming a writer.

As it happens, all students at the Franklin Special School District school had just completed a school-wide book study with Cartaya’s most recent novel, The Epic Fail of Arturo Zamora.

“We chose the book because it represents community and love for family, and that your community can also be your family,” Cornelious said. “One important topic in the book is gentrification, and we were able to make connections to that with what is happening in Franklin. Additionally, the Cuban culture represented throughout the book is very rich and it gave us all an opportunity to celebrate and learn about another culture.”

Both Cornelious and Bishop said the students have had overwhelmingly positive reactions to the book.

“It has also given our bilingual students opportunities to shine by supporting those of us who do not speak Spanish,” Cornelious added. “It has been fun!”

After spinning stories on his grandmother, Cuban foods and the awkwardness of meeting a new girl as an adolescent, Cartaya told of how he was persuaded to change his given name and to put aside his Cuban heritage. While he was in his early 20s and living in Los Angeles, he met a casting director for TV who suggested he change his name Pablo to something less ethnic, that it would help him get more acting jobs.

Cartaya did as the director recommended, but when he later returned to Miami to visit family, his parents were disappointed with the name change. His mother reminded him of how his father had been sentenced to a political prison in Cuba and was tortured before being released two years later thin and barely able to walk.

She further reminded him that when his father emigrated to the U.S., he had to leave behind the person he loved the most and would never see again — his grandfather, whose name was Pablo.

“That really broke my heart,” Cartaya told the students toward the end of his presentation. “Here I was, letting some dude 3,000 miles away dictate terms of my identity, by telling me that I didn’t look like this one thing that I said I was.

“I went back to LA and enrolled in school, and began writing stories that represented what I was. And then I realized that I have permission to have a story that is mine.”

Cartaya has had co-starring roles on both English and Spanish TV, including appearances on the popular NBC show “Will and Grace.” He has also had two other young adult novels published, Marcus Vega Doesn’t Speak Spanish and Each Tiny Spark.