U.S. Congressional candidate Robby Starbuck has filed suit against the Tennessee Republican Party as well as the Office of the Tennessee Secretary of State following his removal from the primary election ballot last month.

Starbuck was removed along with Congressional candidates Morgan Ortagus and Baxter Lee after the party's state executive committee (SEC) voted in April, a move that Starbuck alleges was to keep establishment politicians in the open seats.

Ortagus, a former State Department spokesperson who was endorsed by former President Donald Trump, is the most high-profile of the three now former candidates, but Starbuck's name and popularity has quickly ascended, having been endorsed by controversial and embattled Congressman Madison Cawthorn and Congresswoman Marjorie Taylor Green, as well as Williamson County Sheriff Dusty Rhoades.

The state Republican Party cited Tennessee's new residency requirement, which requires candidates to have lived in the state and in their respective districts for at least three years prior to the election, while arguing that Lee was not eligible due to not voting in three of the four most recent August primaries in Tennessee, according to reporting by The Tennessean.

Now Starbuck has vowed to fight back, tweeting a video clip on April 19 of the late writer and Brietbart-founder Andrew Breitbart simply saying, “war,” as a reaction to his removal from the ballot.

Starbuck's filed court documents opens dramatically with, "the caricature of a cabal of power-wielding party bosses meeting secretly in smoke-filled rooms to rig elections was thought to be a thing of the past—but this practice remains alive and well in Tennessee."

The suit alleges that a "secret vote" was taken in violation of state open government laws. It also says that arguments by the SEC that question if Starbuck is a "bona fide" Republican are not valid with Starbuck citing his nearly year-long campaign, which has resulted in attention from both Republican voters and right-wing media figures.

Starbuck is asking a judge to order that he be added back to the ballot for the August 2022 election, and the entire court filing can be read in full below. 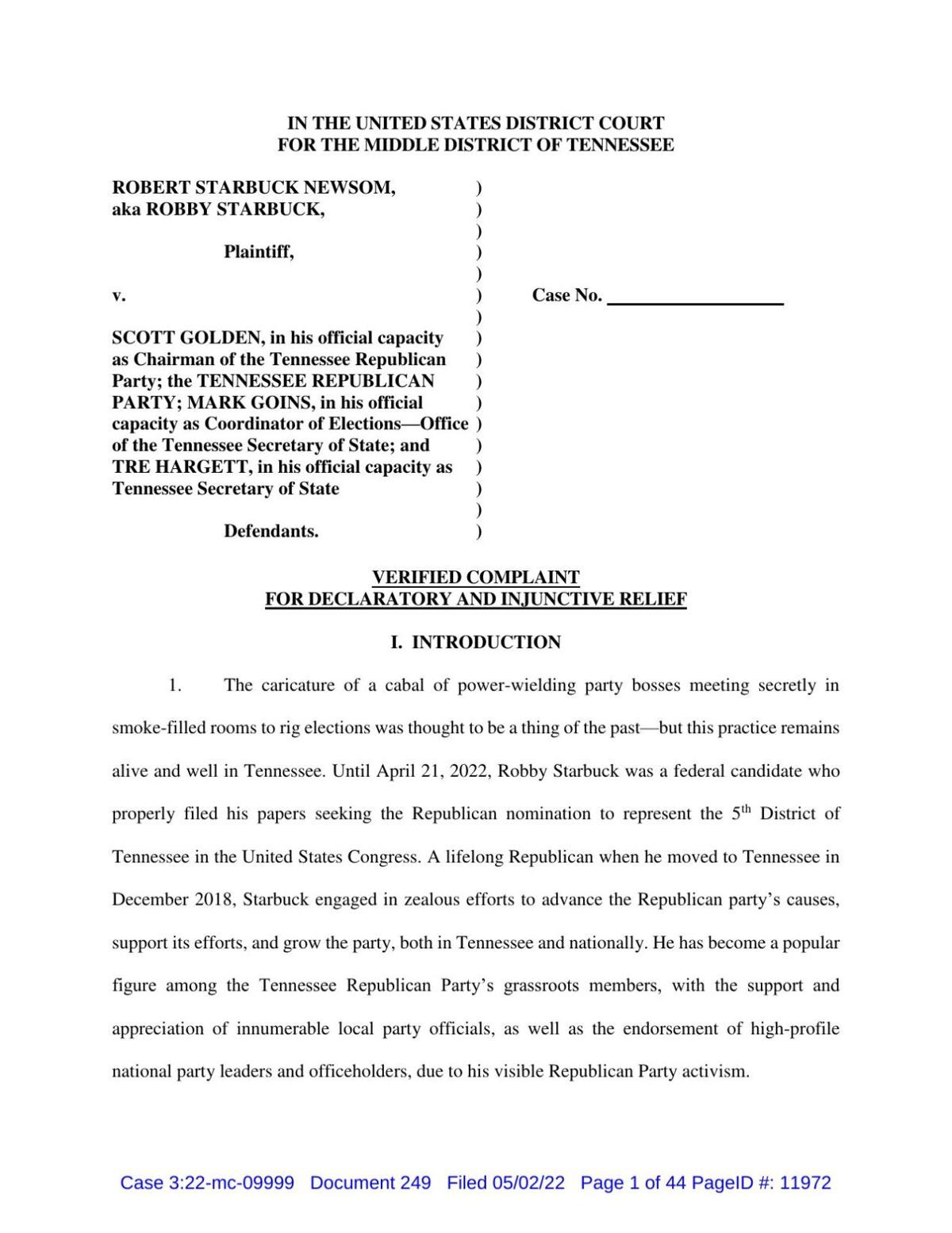