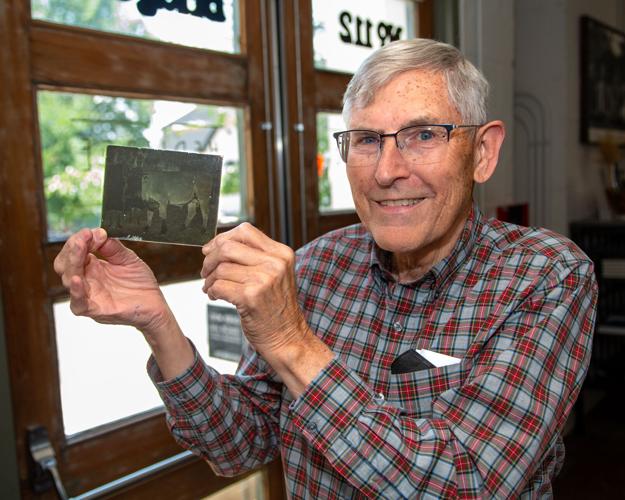 Williamson County Historian Rick Warwick holds a glass plate negative of Florence and Margherita Meacham standing next to a bull, an image that is featured in Warwick's 2022 book "Lemuel Parker, Bingham Photographer." 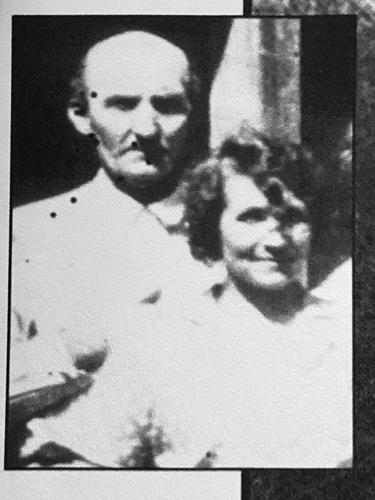 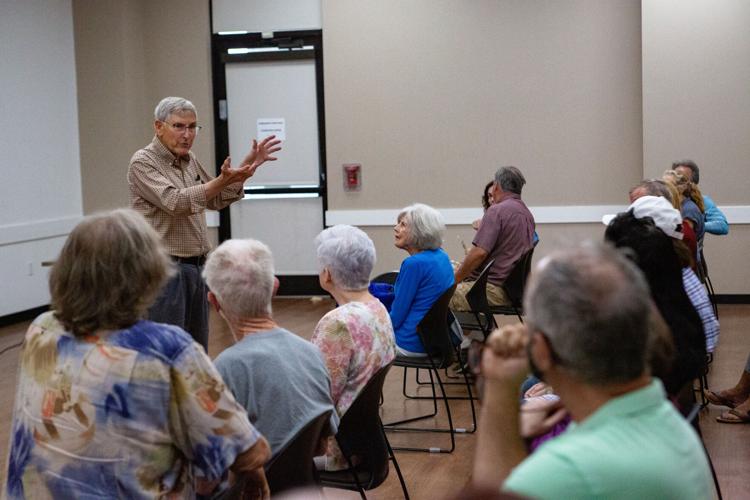 County Historian Rick Warwick is undoubtedly a local treasure, and he's just given the public another glimpse into Williamson County's rich history with his latest book, "Lemuel Parker, Bingham Photographer."

As the title suggests, the book is a collection of dozens of photographs of the Bingham and Leiper's Fork communities in the 1910s made by Williamson County photographer Lemuel Parker. It was published in conjunction with the Williamson County Historical Society, of which he is the president.

Warwick collected dozens of glass plate negatives which were passed on to him by a community member in 2001, and those images were then digitally scanned and archived until they were published in the 48-page book this year.

"The Williamson County Historical Society takes great pleasure in making these marvelous glimpses into the second decade of the 20th century available. These views of the local folk, their homes, churches, schools and village of Leiper's Fork are priceless," the book's introduction reads.

On Wednesday, July 20, Warwick spoke to dozens of community members, some longtime residents as well newcomers, at the Williamson County Public Library in Franklin where he detailed his project and life's work documenting, archiving, and promoting history.

“I came there in the '70s and got to know some of them, or at least I knew their children, or grandchildren, and so that has a personal touch,” Warwick said. “But I'm especially interested in anything in my neighborhood – the material culture is important, and these photographs are so important.”

Warwick's favorite photo from the book is of two young girls, Florence and Margherita Meacham, who Warwick knew when the sisters were senior citizens, with a bull.

“I really enjoyed them, I visited them often, because the had such a great memory,” Warwick said. “They lived in a house that their grandfather bought after the Civil War, and it was just a wonderful experience. Some of these others [people featured in photos in the book,] I knew them because Margaret and Florence would talk about them, even though they had been dead for several years. They knew them as when they were young.”

Warwick's office is filled with glimpses into the past in the form of photographs, painted portraits, furniture, maps, and more that have been saved from trash cans and scrap piles, which speak to what was important to those who lived not so long ago.

“I've always had a warm place in my heart for the underprivileged, the under-recorded, and I think one of the things that historians have made a light of or overlooked is that the underclass have a history too and sometimes it's more important than the guy who was the mayor of town, and he's just as important, because they're more of them than they were the one mayor or the rich families in town,” Warwick said.

Warwick, who is now 75, said that he was once the youngest member of the Williamson County Historical Society. Now he serves as the patriarch of the group, inspiring and educating people of all ages just as he did when serving as a school teacher earlier in his career.

“I feel very fortunate because I started teaching in 1971 at Hillsboro [High School] and because of my quick learning about a guy named Dick Poynor, who had been a slave and became a well known chair maker in the county. And that led me to start other things, and I started surveying the whole county.”

And while we can never know if Lemuel Parker ever imagined that his photographs would be published in a book 2022, we are able to view through his eyes and his camera's ground glass a time that helped to shape the land and the people that make up the Williamson County of today, a place that so many call home.

“That's what makes this place interesting, not only the beautiful landscape, but we have beautiful history that shouldn't be forgotten,” Warwick said. “And I hope that's my legacy that I'm leaving behind that I have learned how to stop, get to say, okay, yeah, look what he was able to collect."

Many of Warwick's collected photographs can be viewed online here, and more information about the Williamson County Historical society, including their numerous historical books and journals, can be found here.