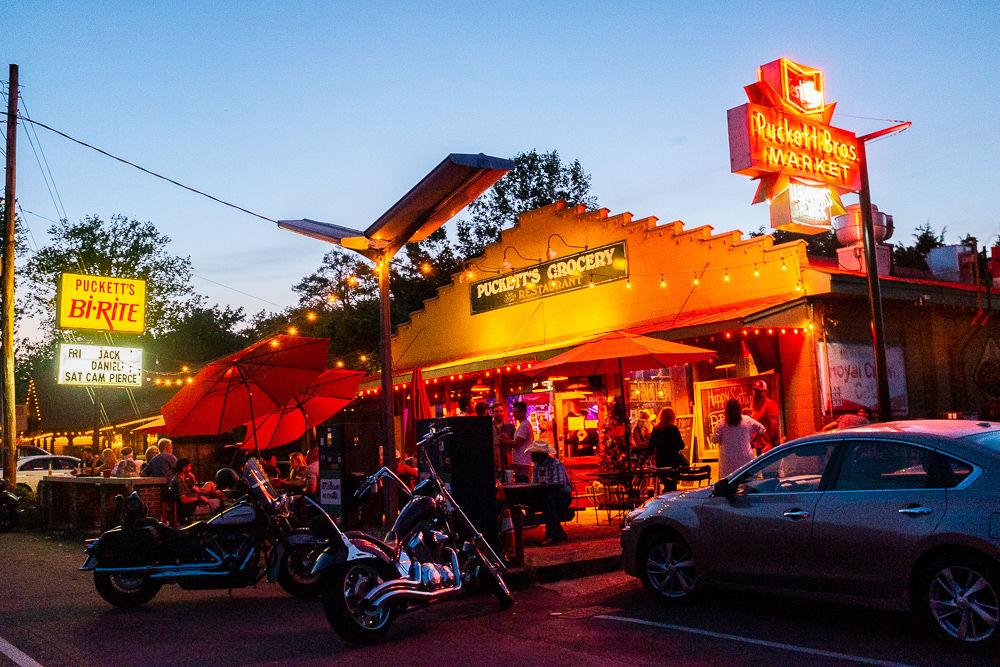 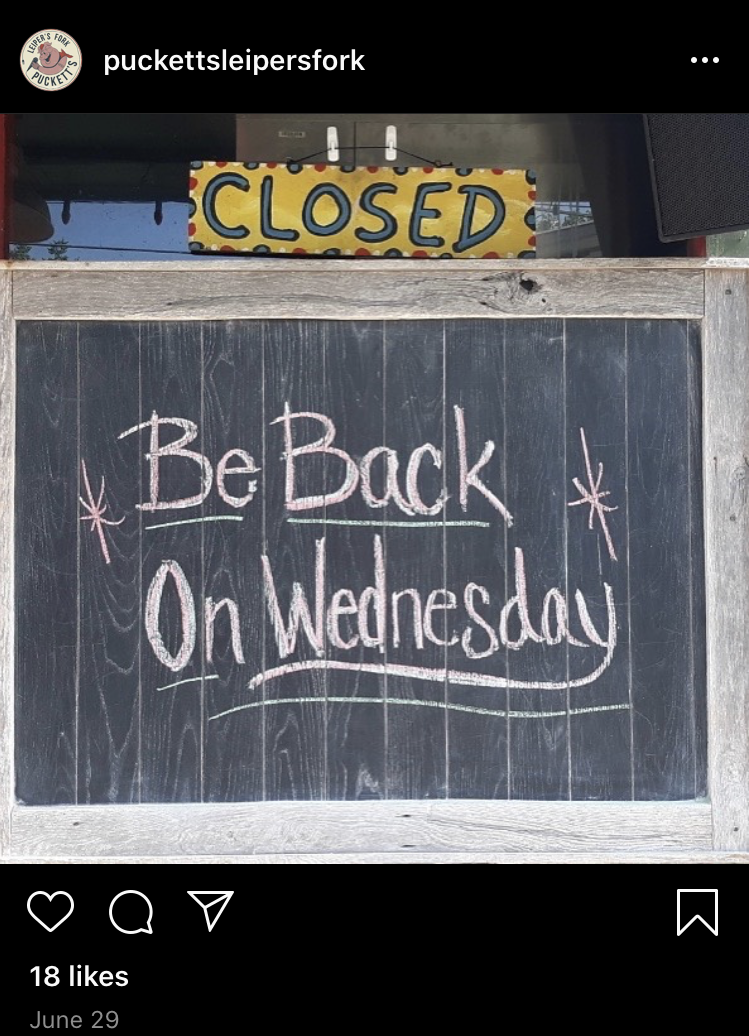 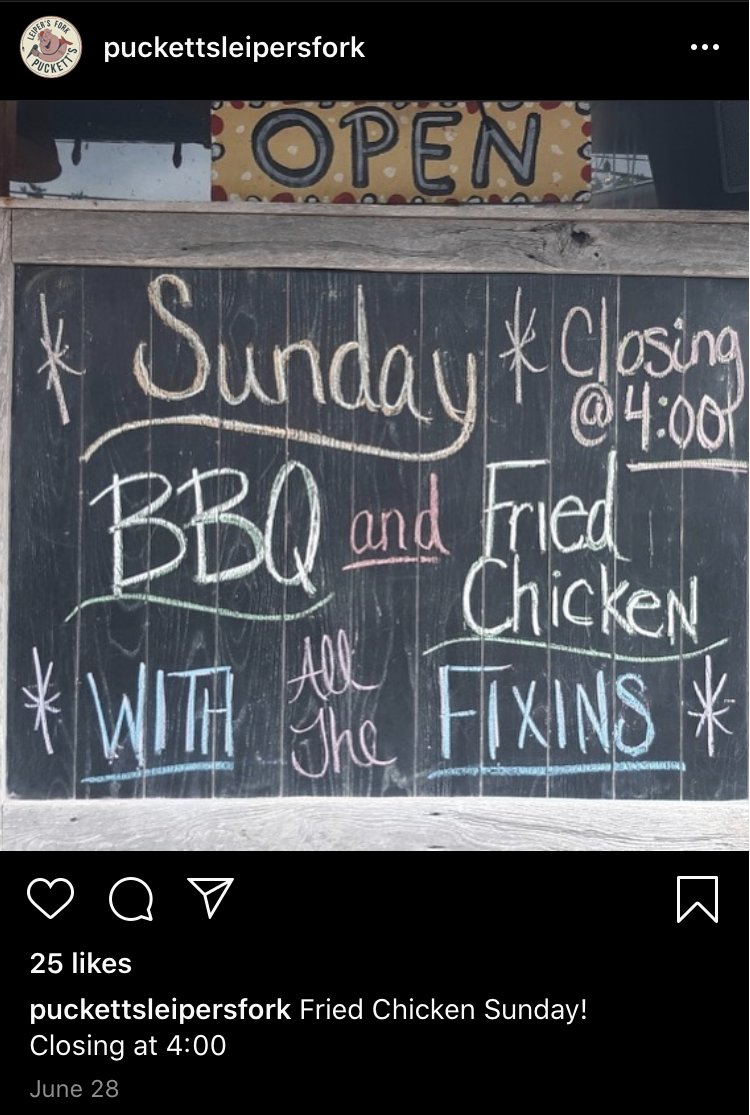 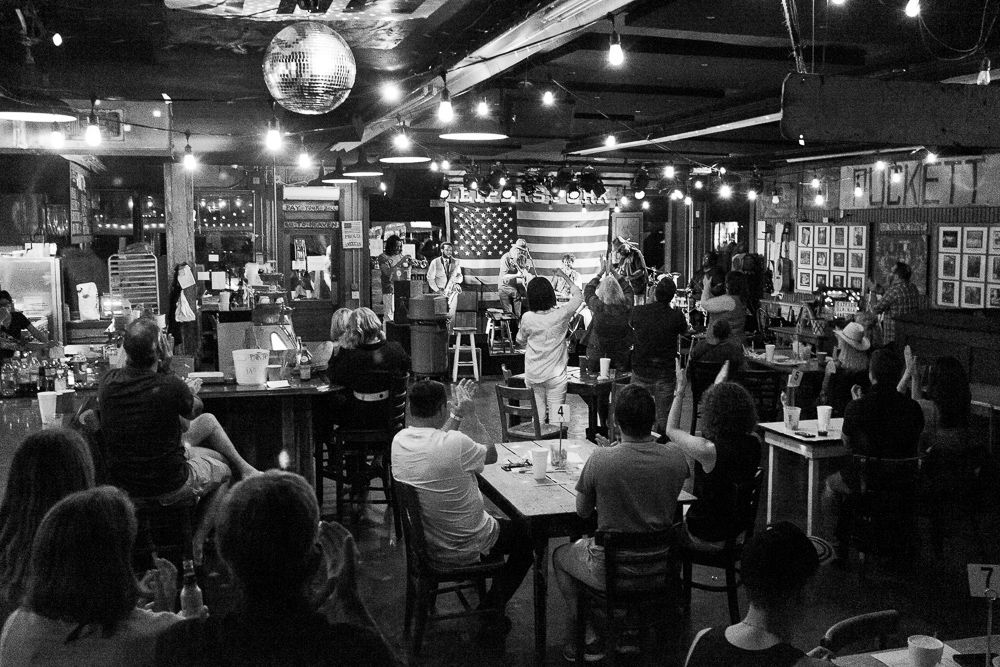 Live music returned to the Puckett's at Lieper's Fork Stage on May 23. 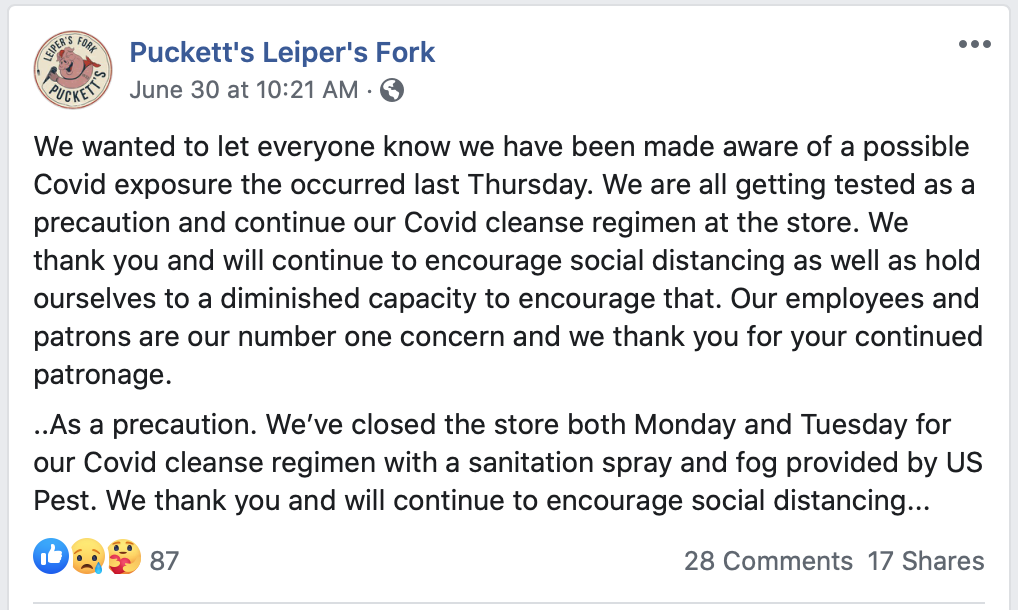 A group of Middle Tennessee restaurant workers is holding a picket demonstration at Puckett’s of Leiper's Fork on Thursday after voicing grievances about safety.

They allege that an employee was fired when he voiced concerns after a recent COIVD-19 exposure at the restaurant.

The picket line is organized by ROC Music City, the Nashville-chapter of Restaurant Opportunities Center United, a nonprofit restaurant workers advocacy group. On the group's Facebook page, it said that it is “fighting to improve wages and working conditions for the nation’s restaurant workforce.”

According to ROCU's website, the group was founded after the Sept. 11, 2001, terrorist attacks in New York City as a worker relief center for affected restaurant workers and their families. It has since grown into a national organization.

The group will form outside of the historic restaurant, grocery and venue on Thursday night from 6-7:30 p.m.

Anthony Smithson, a former employee, claims he was terminated from the Leiper's Fork restaurant because he wanted to tell customers about a recent COVID-19 exposure that he alleges the owner hid from customers.

Puckett’s at Leiper’s Fork owner Rob Robinson denies the allegations made by Smithson.

Smithson, a former cook, said that he was fired after he was told that he could leave for the day after he expressed his concern over the exposure. Smithson said that he was not aware of his termination until he was taken off the schedule the next day.

Robinson said that he closed down the restaurant on Saturday, June 27, immediately after he was informed that a bartender had been given a positive test result for the virus after taking the test on June 25.

“They found out on the following Saturday, the 27th, and informed us, at which point we immediately closed the bar. I personally came in and discussed the situation with employees,” Robinson said, adding that he personally performed a deep clean of the business.

Robinson said that the employee who tested positive had last worked on June 25, and that his staff performs regular cleanings outside of the deep cleaning.

On Sunday, June 28, Puckett's of Leiper's Fork posted its daily menu on Instagram where they said that they were closing at 4 p.m., and on Monday, posted that the restaurant was closed and would be open on Wednesday.

On Tuesday, June 30, Puckett's of Leiper's Fork posted on its Facebook page that they would be closed due to a "possible COVID exposure," from Thursday, June 25, but did not specify that an employee who was working had actually tested positive.

On July 1, they announced that they were going to “pump the breaks” on musical performances, something that is scheduled to return this Thursday.

In May, the restaurant had to shut down just days after it reopened after it said in a Facebook post it may have been exposed to an asymptomatic person during a time when most guests were not wearing masks.

Robinson said that current health and safety procedures include extra cleanings and temperature checks, as well as operating at half capacity, something that was done in May.

"We keep signs posted, encourage social distancing, we have reduced our capacity, updated and upgraded our cleaning regimen, bought and installed touchless hand dryers. Hired an outside crew to do extra Covid cleansing. We have a laser thermometer for both employees and patrons."

Robinson said that it has been a "tremendous challenge" to adapt to the ever-changing procedures, but said that his staff has adapted when required.

"I am proud of the way my workers have stood up to the task," Robinson said. "Every time we add a new precaution or change procedures, they have adapted well."

ROC Music City Co-founder Hayden Smith said in a phone call that the issues Smithson reported represent a pattern of issues that restaurant industry workers are facing during the ongoing COIVD-19 pandemic.

Smith said that the Nashville area specifically faces challenges due to a lack of unions and government relief and support that he said hasn’t helped everyone who has been impacted by the public health crisis.

“We kind of needed to band together to create our own safety system and structure, and so we’ve primarily been organizing around worker safety and protections through COVID-19, and I’ve been trying to call out businesses that aren’t taking good enough care of their workers," Smith said.

Smith said that the group has three goals, saying that its biggest grievance with Puckett’s is that guests allegedly weren’t told about a potential exposure, an act that was followed by Smithson’s termination.

“We want more transparency going forward, we want paid sick leave for the workers who were exposed,” Smith said. “We want a promise that in the event of future cases they will promptly close down for cleaning.”

“When I learned of a positive COVID19 case at Pucketts, I couldn’t stay quiet,” Smithson said in the news release, “I tried to raise concerns about safety to my supervisor and was told that their instructions were to keep business going as usual. I objected, and was sent home. The next day, I was fired.”

Robinson refuted this, saying in an email, "When I ask my employees to get tested, they are concerned enough to do it."

ROC's Smith said that the phased reopening plans from both state and local governments have put both workers and customers at risk.

“By reopening restaurants in the initial phases, the governor and the mayors of these counties have used restaurant workers’ lives as the canary in the coal mine to see if cases would spike. And now they are," Smith said in a news release.

"That’s why it’s so important for restaurant workers to come together right now to protect each other and our customers. We deserve paid leave if we are sick, and customers have a right to know if there’s been an outbreak at their favorite restaurant."

In June, the Washington Post reported similar challenges across the nation, challenges that add burdens to a large workforce with few safety nets and to businesses whose futures can be permanently altered in a short period of time.

Editor's note: Puckett's of Leiper's Fork is a separate entity from the Puckett's Grocery and Restaurant chain that is owned and operated by A. Marshall Hospitality.