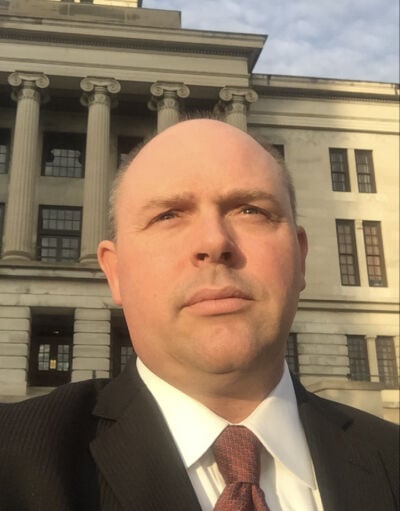 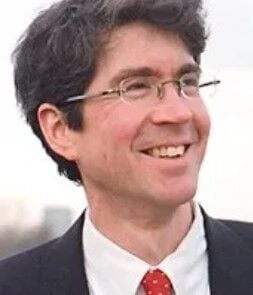 President and Co-Founder of Free Speech For People John Bonifaz 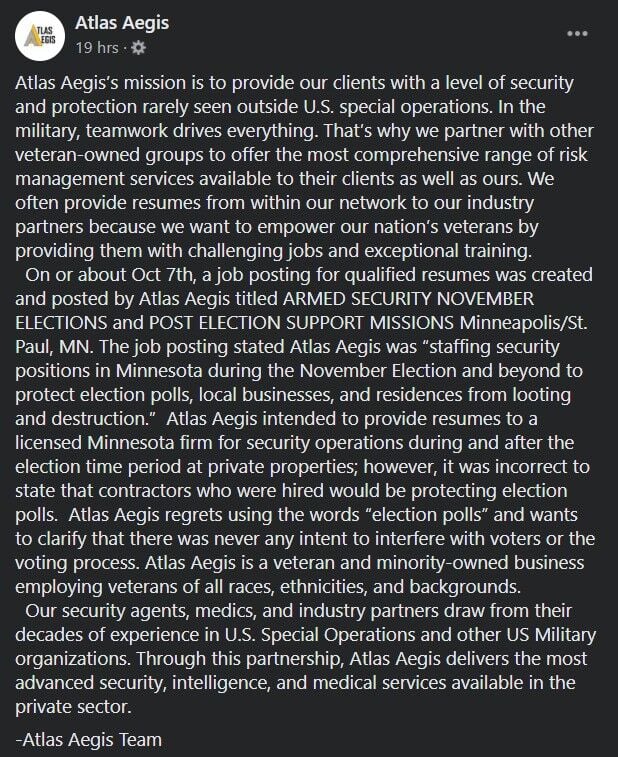 A federal judge issued a preliminary injunction in a lawsuit against Franklin-based Atlas Aegis, a company accused of attempting to recruit and deploy special forces operators in Minnesota on and around election day for what advocacy groups have called "voter intimidation."

The preliminary injunction handed down in a United States District Court in Minnesota on Thursday bars Atlas Aegis from deploying armed agents within 2,500 feet of any Minnesota polling place during early voting and on Election Day.

Additionally, Atlas Aegis is prohibited from threatening to deploy armed agents to Minnesota or "otherwise threatening, intimidating, or coercing voters in connection with voting in Minnesota," which, according to the court order, will remain in effect until the court issues another order.

"The presence of armed ‘guards’ at the polls with no connection to state government is certainly likely to intimidate voters,” U.S. District Court Judge Nancy E. Brasel said in the order.

Atlas Aegis is also ordered to send the lawsuit's plaintiffs, the Council on American-Islamic Relations of Minnesota and The League of Women Voters of Minnesota, the names and contact information the as of yet unidentified "John Does #1–10."

Free Speech For People, a nonpartisan nonprofit legal advocacy organization founded a decade ago after the U.S. Supreme Court's landmark Citizens United decision, worked as the co-lead counsel in the lawsuit.

Co-Founder and President of Free Speech For People John Bonifaz said in a phone call that the next steps are adding the names of the individuals and/or agencies identified as the "John Does" to the lawsuit to ensure that the order is followed by all parties.

“We will remain vigilant in prosecuting this case to ensure that this order is complied with and that any other type of voter intimidation that these defendants might engage in will be blocked," Bonifaz said.

On Friday Minnesota Attorney General Keith Ellison announced that a written assurance had been reached ensuring that Atlas Aegis will not recruit or provide private security in the state during the upcoming election, but Bonifaz said that the agreement did not specifically include Atlas Aegis co-founder and chairman Anthony Caudle.

Bonifaz said that while he didn't know the specifics as to why Caudle wasn't a party to the Minnesota AG's agreement that it was important for the plaintiffs to make sure that Caudle was specifically held accountable by the courts, citing statements made by Caudle in a Washington Post story.

"So there had to be court action to block this voter intimidation from going forward, not just from the company but from the chairman himself," Bonifaz said.

"Anyone who conspired with this company and Mr. Caudle needs to be held accountable as well for this blatant violation of the Voting Rights Act," Bonifaz added.

Free Speech for People released a news release on Thursday where Jaylani Hussein, Executive Director of the Council on American-Islamic Relations of Minnesota, called the ruling a "major victory for democracy and for the fundamental right to vote."

“Today’s ruling affirms the right to unimpeded, unthreatened access to the vote for every eligible Minnesota voter,” Michelle Witte, Executive Director of the League of Women Voters of Minnesota said in the news release. “We’re grateful the Minnesota Attorney General’s Office quickly launched an investigation into this situation and came to an agreement, and we’re delighted we were able to carry it further. Armed mercenaries have no place in our election system, either by their presence at the polls or their threats to be there. We applaud the court’s decision to protect voters—particularly voters of color—as they exercise their constitutional right to vote.”

On Wednesday, Atlas Aegis issued a statement on their Facebook page to clarify their position and intent in their advertisements for the security job.

"Atlas Aegis intended to provide resumes to a licensed Minnesota firm for security operations during and after the election time period at private properties; however, it was incorrect to state that contractors who were hired would be protecting election polls," the post reads. "Atlas Aegis regrets using the words 'election polls' and wants to clarify that there was never any intent to interfere with voters or the voting process."

Bonifaz said that they've seen an uptick in voter intimidation and voter suppression efforts this election cycle, noting that Free Speech For People is also involved several other lawsuits surrounding voting rights including in an ongoing Federal lawsuit against the Trump administration and other top government officials for what the group alleges is voter intimidation nationwide.

"There is a very dangerous moment that we have right now in this country where there are people who believe somehow, because the President has sanctioned it, that they can go out and illegally intimidate voters," Bonifaz said. "They cannot. This order makes that clear, and anyone who chooses to try and do that will be met with the same kind of court order."

Bonifaz said that Thursday's court order is an important win for all voters, regardless of their political affiliation or state residency.

"I think that if people feel that they're not subject to that intimidation, that doesn't meant that it's OK to have others subject to that intimidation," Bonifaz said. "They may not live in Minnesota, but they should be concerned wherever in this country there are people being targeted with illegal voter intimidation. Our democracy requires that all of us have an equal voice and an equal vote, and in this case that was being attacked by this private company and these individuals."