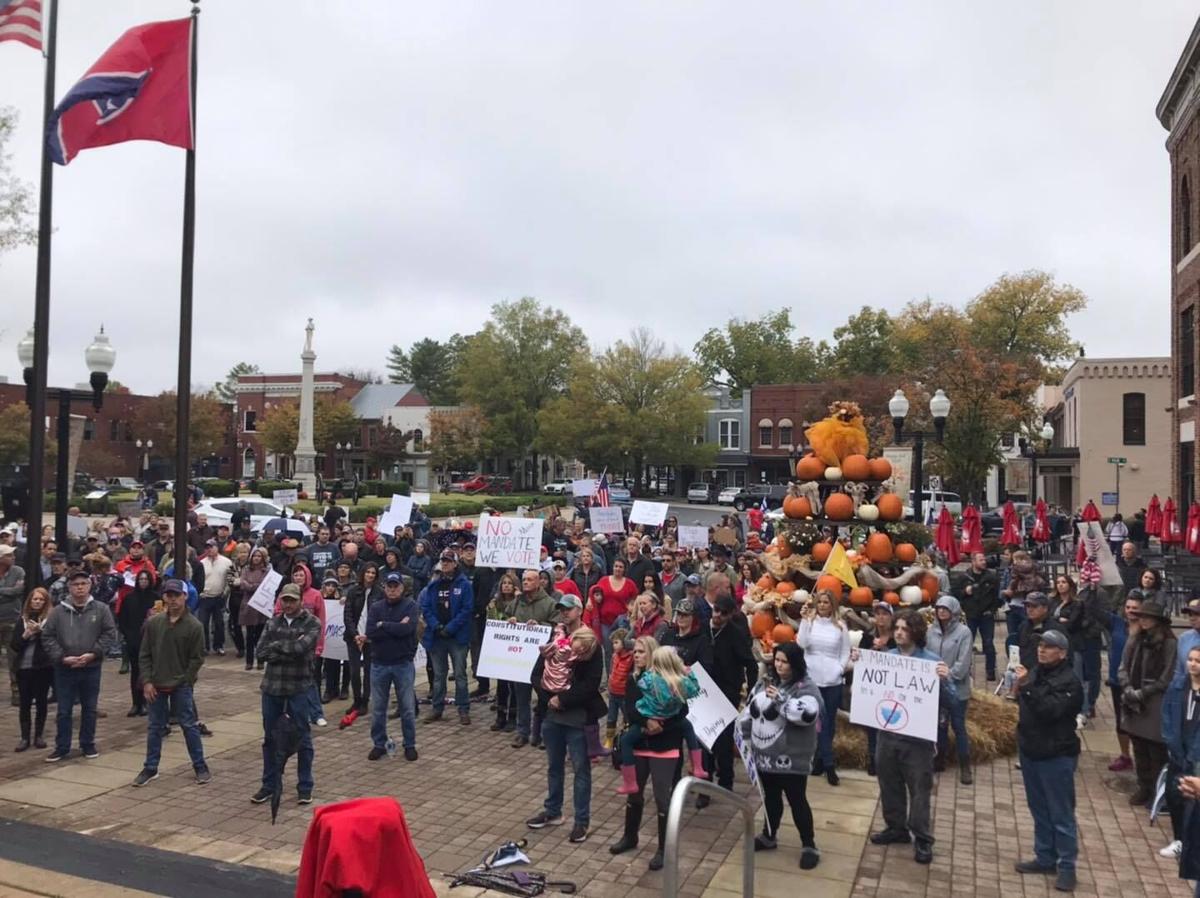 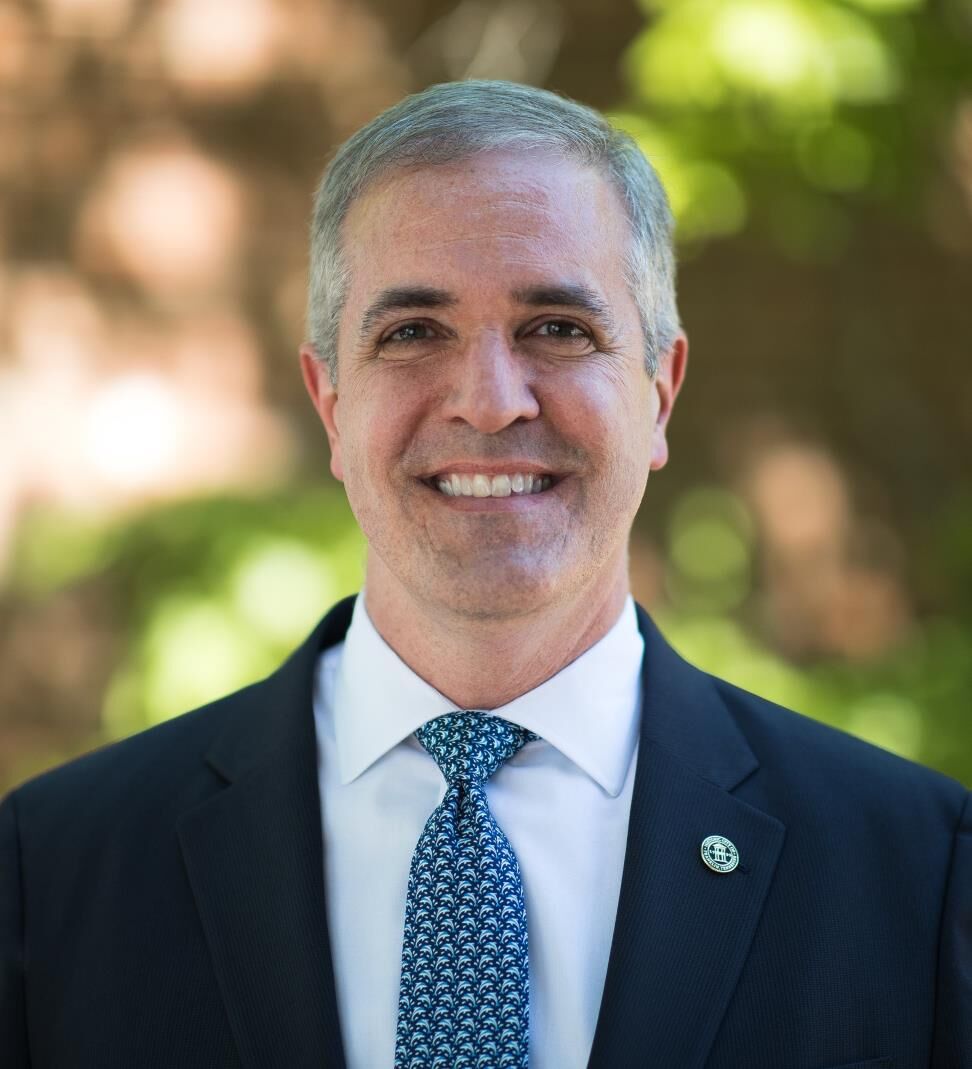 Franklin saw a protest on Saturday morning that was attended by more than 100 demonstrators who gathered just hours after Williamson County's second mask mandate went into effect due to the ongoing COVID-19 pandemic, protesting both the mandate and a belief in a rise in government overreach.

The event was put on by Tennessee Stands, a non-profit advocacy group that according to their website "serves to protect the individual liberties of all Tennesseans as stated in the Tennessee State Constitution and given to us by God."

Specifically the group is challenging what they see as government overreach in response throughout the months-long pandemic.

Tennessee Stands Founder and Executive Director Gary Humble said in a phone call that the event drew well more than 200 people to the square which he said was sparked by the mask mandate, but was really more about what the group argues is the government operating outside of the Constitution.

"The root of the entire thing is that we strongly feel that all of these mandates, whether it be a mask mandate, a stay-at-home order, a restriction on businesses calling folks 'essential' or 'non-essential,' that this is all unconstitutional activity," Humble said.

"Our argument is simply that it's way past time to return to a Constitutional form of government and we are operating way out of bounds right now."

Humble said that Saturday's event was one of several that he's spoken at across the state, from larger public gatherings to more intimate, private discussions in the homes of likeminded Tennesseans who feel the pressures of government during the pandemic.

Many attendees of the rally held signs with slogans such as "No Mask Mandate We Vote" or "Fear is the Real Virus," while some residents took to social media to condemn the gathering on both Tennessee Stands' social media posts and on personal accounts with some asking if the group was issued a permit by the city and if so, why it had been approved.

On Oct. 13 the city passed an amendment to the city's code to require permits for future demonstrations after a summer of protests throughout the city and much of the country. As of Tuesday Stuckey said that five permits had been applied for and approved for a variety of events.

According to Franklin City Administrator Eric Stuckey, the group applied for a permit on Thursday after the new mask mandate was announced and said that the permit was approved in an effort to not infringe on the group's First Amendment rights.

"The request was made to have a public gathering to express themselves and let them express their First Amendment rights," Stuckey said. "They were aware that the mask mandate had been issued and had just gone into effect at midnight that morning. So it had just gone into effect and so really, it's put on my shoulders and is my responsibility to issue permits of that nature, and I just felt that we needed to go ahead and let them express themselves. They could choose to wear or not wear a mask."

Stuckey said that the city's approach, especially in the first days of the mandate's re-instatement, is focused on public education and encouragement versus relying on issuing citations to ensure compliance.

"I understand the concern around it," Stuckey said, adding that it was an outdoor event that was monitored by police and fire services.

"There's a lot of trade offs here and that's what we looked at, and the public square is a place where people should be able to express themselves and peaceably assemble, and that was really what we were trying to balance there, and we didn't want to forbid the event on the assumptions that they weren't going to wear masks," Stuckey said, admitting that most attendees in fact did not chose to wear face coverings as part of their expression.

The county and state have both seen an increase in COVID-19 cases, with Williamson County Medical Center recently announcing a 50% increase of inpatient COVID-19 hospitalizations and Maury Regional Medical Center prompting to suspend elective procedures.

"We've seen an over 150% increase in active cases in the last month. The positivity rate has climbed up -- it was at 7% and is almost at 8% in that same time that the cases have gradually creeped back up," Stuckey said.

"These are the reasons that the mandate was reinstated, so we're trying to inform people that this isn't driven by a whim, it's driven by data," Stuckey said. "We understand that there are different perspectives but we're also trying to make sure that they understand the context and the information that is guiding the policy decisions at the county level and the city level, so it is a difficult balancing act."

Stuckey said that the reasons to actually deny a request are limited to the logistics of being able to accommodate groups such as not approving of two groups for the same location at the same time and ensuring that public safety in terms of the need for city resources such as police can be handled.

"The path for rejection is very limited because we don't want to get into choosing whose speech gets heard," Stuckey said.

Stuckey said that the public health impacts of permitted gatherings is and will continue to be something that is considered when reviewing applications, but again, said that the size of the group and the fact that it was an outdoor gathering helped lead him to approving Saturday's rally.