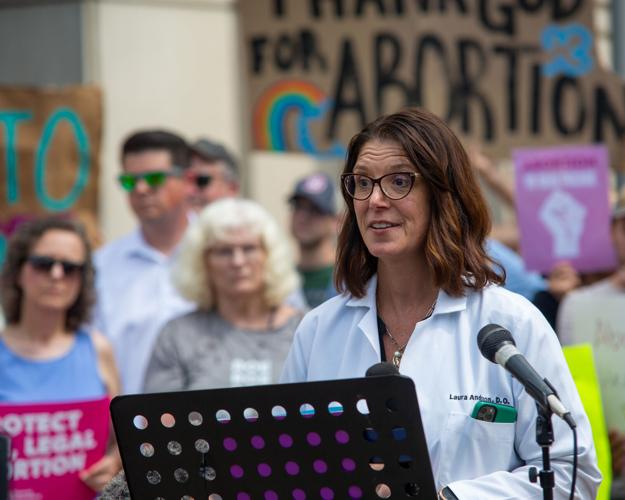 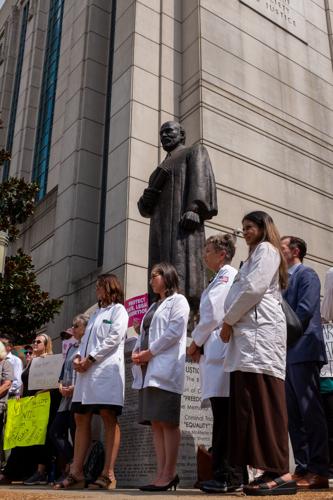 A Franklin doctor was one of several medical professionals who joined dozens of community members outside of Nashville's Justice A. A. Birch Building on Thursday to protest Tennessee's abortion ban which went into effect that day, dramatically reshaping the state's healthcare landscape.

“I'm here to tell you that the ‘Human Life Protection Act’ is a barrier to women trying to access comprehensive health care,” Dr. Laura Andreson told the crowd. “The shared decision making that occurs between a woman and a physician belongs in the exam room and not in the legislature.”

Andreson has been practicing obstetrics and gynecology since 2006 and echoed the concerns of her fellow medical professionals, adding that the new law now creates "unnecessary conflict" between a doctor and patient.

“Only until you’ve sat in the silence that occurs after delivering a terrible diagnosis to a parent, or informing a woman hemorrhaging that the only way to save her life is to end her pregnancy, do you have a right to weigh in on this subject.”

As reported by the Nashville Post, the Republican-led state legislature passed the Human Life Protection Act in 2019, and the 30-day countdown for the abortion ban was triggered a month ago by the official recording of the U.S. Supreme Court’s decision overturning Roe v. Wade.

Now state law reads that those who perform or attempt to perform an abortion could be charged with a Class C felony.

"While state officials, including Gov. Bill Lee, describe an 'exception' under the law for protecting the life of a pregnant person, the law only provides an 'affirmative defense' for doctors charged with the felony," the Nashville Post reported.

“Every day since I learned the application to the trigger ban I worry about becoming a felon," Andreson said during her address. "As today, Aug. 25, has been rapidly approaching, I've encountered multiple situations in my clinic that will absolutely be considered abortions subject to criminal penalties. Today is the day that the routine care carries the risk of being charged with a felony.”

Trigger bans also went into effect on Thursday in Texas and Idaho. According to reporting by The Guardian, some one in three women between the ages of 15 to 44 live in states where abortion has been banned, meaning that nearly 21 million women are affected by this dramatic reversal of the rights of women.

According to reporting by NBC News, 21 states have either banned or restricted abortion access or have pending law to ban or restrict abortion.

“This law is dangerous to the women of Tennessee,” Andreson said. “Whatever your opinion is on abortion, please realize that these government mandates pose a significant threat to our health, and many are downplaying this risk.”

“There's a lot of misinformation and confusion regarding exceptions written into this law. Let me be clear, once again, exceptions to this law do not exist. By speaking out against the law, I hope that we can reach an understanding that abortion is healthcare and the women of this state deserve better.”

As Williamson County is the wealthiest county in the state, many residents will likely have the financial ability to travel to states like California where they can receive legal abortion services. While those scenarios do happen, doctors warn that this law has many consequences for women and families that may not be clearly understood by the public, and will likely negatively impact people's lives regardless of their socio-economic status.

"If you have a pregnancy complication where a baby is not viable and you need to travel elsewhere to terminate, that's one thing, but it's another thing if you are critically-ill – you are bleeding into your abdomen," Andreson told the Home Page after the demonstration, "I can't transfer you anywhere. There is a federal law that requires that I treat you acutely so there's no transferring."

She added that her views are her own and do not necessarily represent her colleagues or employer.

View the entire demonstration which included a news conference below.