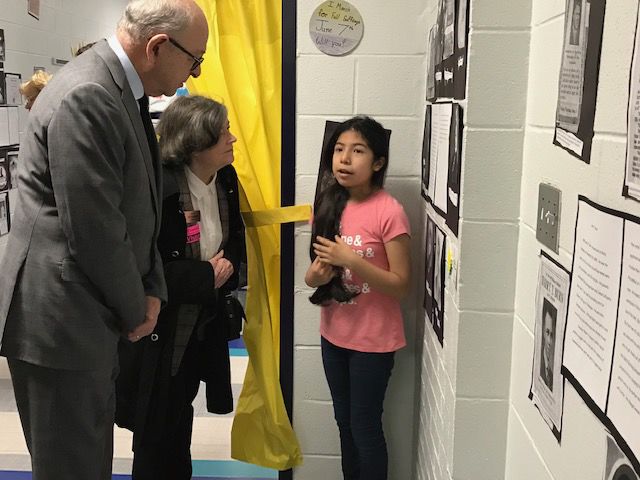 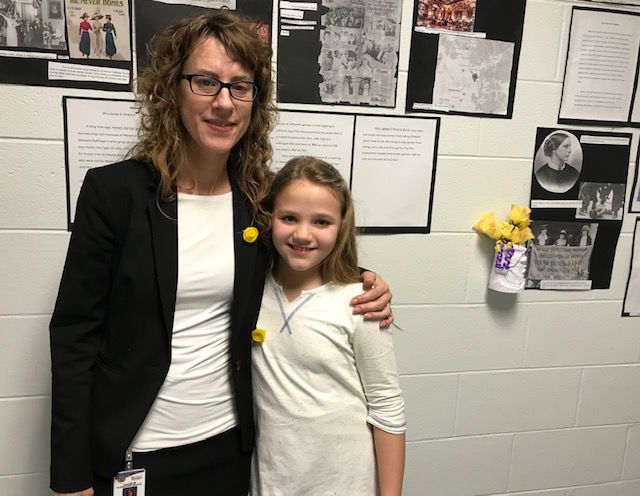 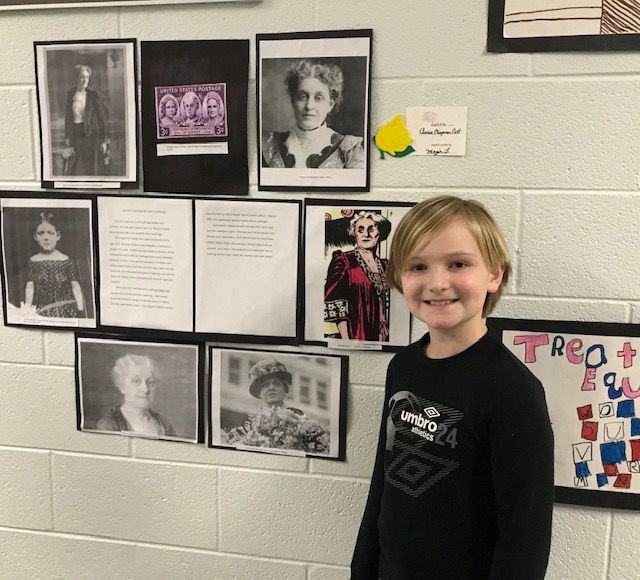 Major Twitchel stands in front of his display.

Major Twitchel stands in front of his display.

For anyone looking to learn more about the women’s suffrage movement from 100 years ago, there are a few third and fourth-graders at Franklin Elementary School who can help.

Franklin Mayor Ken Moore, for one, picked up a fact or two as one of several visitors to the school’s women’s suffrage museum that opened down a hallway in the building Monday morning. Moore was there for the ribbon cutting.

“I’m impressed with the research these kids have done,” Moore said, “and I’m impressed by how articulate they are and what they learned with their research.”

This being the centennial of the 19th Amendment that became law Aug. 26, 1920, giving women in the United States the right to vote, all school districts in the state have been instructed by the Tennessee Department of Education to teach about the women’s suffrage movement each month during the 2019-20 school year.

They wasted no time at Franklin Elementary, with students having started the museum project in September. Michelle Pieczura, accelerated learning teacher for third and fourth grade at the school, said students became eager about learning more after reading a couple of articles on the suffrage movement.

“I pulled some names of some of the important players during suffrage, and they pulled names out of a hat,” Pieczura said of how the project began. “They learned how to take notes, do research, learned how to organize all of that, and create a biographical essay. And then they did some more research to find some artifacts that go with that particular person. The created a piece of artwork for the museum. They decided it would be neat to have photo booth and a coloring station and a button making station.”

Major Twitchel, a fourth-grader, proudly explained the role of his subject, Carrie Chapman Catt. Serving as president of the National American Women's Suffrage Association, Catt was a strong advocate who campaigned for the 19th Amendment and played a key role in the suffrage movement.

“It was cool to learn about women getting the right to vote,” Twitchel said, standing in front of his display. “I really enjoyed the research, and then getting together with everyone to help build this museum.”

Alayna Garcia, also a fourth grader, beamed as she spoke of her subjects in the museum, Elizabeth Merriwether and Lide Merriwether. Both born in the 1820s, they dedicated their lives to the suffrage movement and played key roles in women eventually getting the right to vote.

“The fun part was putting everything together,” Garcia said. “What’s important about this museum is we can learn from the past and not make the same types of mistakes again.”

The suffrage movement had its opponents as well, and there were students who took on those subjects and shared their stories. One was third-grader Evelyn Beauchamp, who profiled an anti-suffrage woman named Mrs. James S. Pinkard. She challenged Carrie Catt through a newspaper article that Evelyn had displayed, the headline reading “Questions for Mrs. Catt” and “Why is the Suffrage Leader Silent?”

Mayor Moore said he was impressed with how the students included all facets of the suffrage movement.

“They’ve done a lot of research that highlights the important people in the women’s suffrage movement, and also they talked about the challenges of what the men thought,” he said. “They thought they were going to lose their jobs and the women wouldn’t’ be at home and would take over, cancel their votes. There was a lot of worry among the men, and I think it’s pretty interesting how they depicted that.”

The museum will remain opened for several months, according to Pieczura.

“This was created for the whole school because [the Department of Education] is requiring everybody to teach something about suffrage every month in honor of the anniversary,” she said. “So we did this with the thought that we could leave it up and teachers could come and use it the for their monthly plans.”