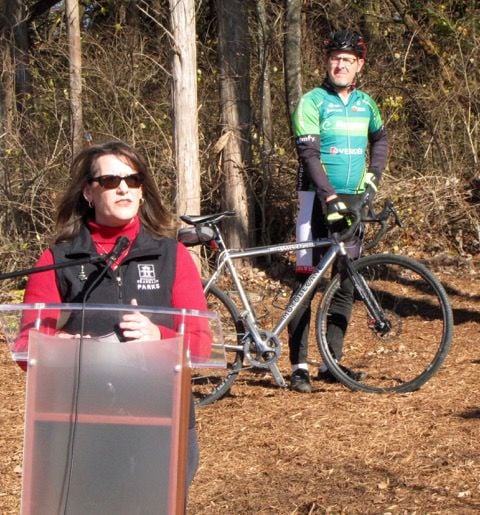 As a cyclist stands at the trailhead, Franklin Parks Director Lisa Clayton gets the ceremony underway for the city's new mountain bike trail adjacent to Columbia State Community College. 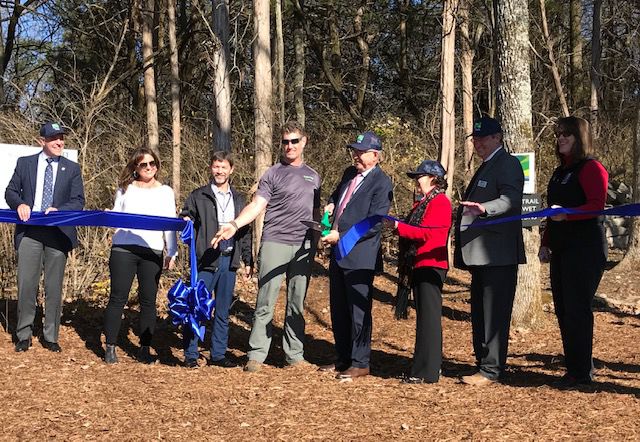 As a cyclist stands at the trailhead, Franklin Parks Director Lisa Clayton gets the ceremony underway for the city's new mountain bike trail adjacent to Columbia State Community College.

Nine months after construction began, the city of Franklin opened its first mountain bike trail on a wooded hillside at the Williamson County campus of Columbia State Community College.

Michael Sheperd, for one, couldn’t be more excited. A mountain bike enthusiast who works at nearby AlphaGraphics, he was ready to hit the trail along with his friend Geoffory Callahan just as soon as the ribbon was cut at the trailhead.

“I’ve ridden on a lot of trails in the Nashville area, and this one is vastly different,” said Sheperd, who actually became familiar with the Cool Springs area trail as a volunteer in its construction. “There are lots of different trail opportunities.”

The city partnered with Mosby Cool Springs and CSCC for this project, Franklin’s first to use parkland impact fees. To officially open the trail — and there were several cyclists on hand to give it a whirl — the city held a ribbon cutting Thursday afternoon led by Franklin Parks Director Lisa Clayton and featuring Mayor Ken Moore; Kevin Lindsey, Parks facility superintendent who oversaw the project; Dearl Lampley, vice president of the CSCC Williamson campus; Janet Smith, president of CSCC; and Rebecca Wynd of the nonprofit Outdoor Encounter, which managed the design and construction of the trail.

“There are different kinds of mountain bike trails,” Wynd said, “and this is more of a technical type trail. With all the rock that’s here, we have basically been able to create a playground for mountain bikes. We do have a set trail that we built, but over time we just know there’s going to be a million more options for people. You could ride this a hundred times and not have the same ride.”

The current trail is on 4.72 acres on property known as The Standard at Cool Springs subdivision, and covers about 1¼ miles, three-quarters of a mile on the eastern side of Knoll Top Lane and half a mile on the western side. The Parks department plans to expand the trail over more adjacent properties to cover 8 acres and around 4 miles of trails in the next three years.

Preston York, founder and owner of FlowMotion Trail Builders in Anniston, Ala., designed and constructed the trail. He said that while the landscape is ideal for a highly technical mountain bike trail, it also needed to be accessible for all skill levels of cyclists.

“We wanted something that would be beginner-friendly, York said. “We didn’t want it be too technical where it eliminates a lot of users. So that’s the biggest challenge, making it accessible for a variety of users.

“It’s a hillside that goes straight up and is full of rock. But from a mountain biker’s point of view, its perfect. That’s exactly what we like. We maximize the usage but want to optimize the experience, so it’s blending those two that creates a really good experience for mountain bike users.”