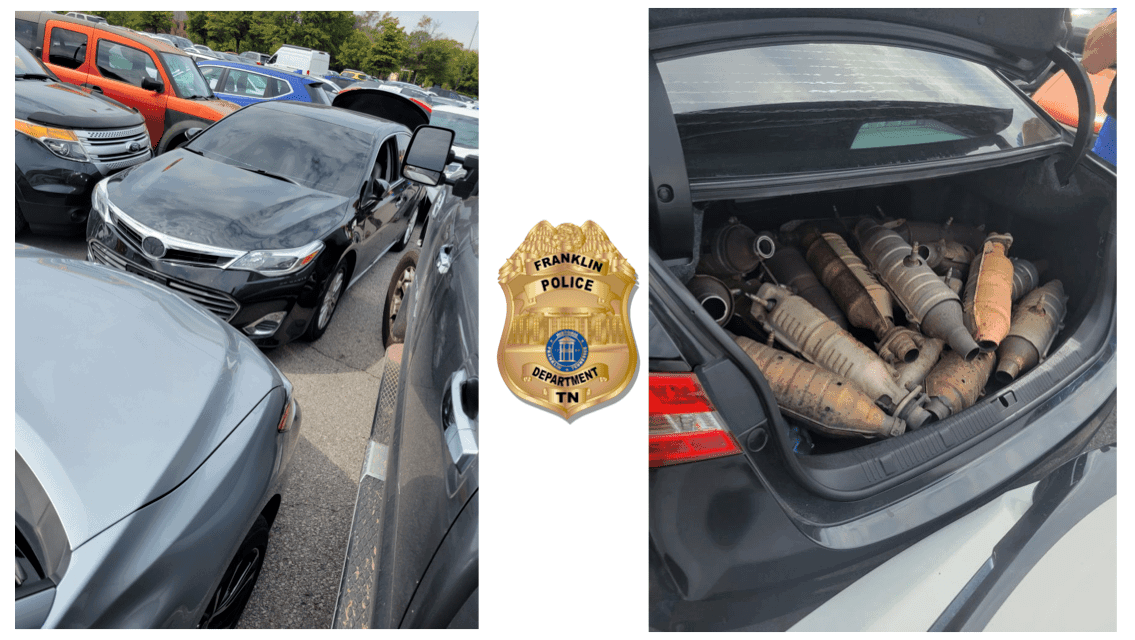 The Franklin Police Department arrested two people in connection with the theft of more than two dozen catalytic converters.

According to an FPD news release, 44-year-old Laquetta Eugene, of Houston, Texas, and 32-year-old Chesare Rivers, of Memphis, were arrested on Thursday, Sept. 30, after officers witnessed Rivers under a car with an electric saw.

Police reported locating 26 catalytic converters inside of Eugene’s car, with all of them believed to have been cut from vehicles.

Catalytic converters have long been the target of thefts from automobiles due to the precious metals such as platinum, which can be extracted from the external exhaust emission control device that reduces toxic gases and pollutants in an exhaust gas.

As of Wednesday morning, the international value of platinum was over $900 per Troy ounce, a measurement of weight that is nearly identical to a standard ounce.

According to Specialty Metals, a standard catalytic converter has between three to seven grams of platinum but that amount can vary based on the vehicle's make and model.

In 2011 Newsweek reported on the national epidemic, detailing an incident in Shelby County, Tenn., and citing law enforcement who have said that thieves could be anyone from auto workers to addicts looking for quick cash.

Newsweek's reporting said that thieves could earn anywhere from $25 to a couple hundred dollars per stolen convertor and replacing the devices could cost vehicle owners over $1,000.

In 2008 the Tennessee legislature took up the issue and passed a law requiring scrap metal buyers to document who they were buying from including getting a photo id and thumbprint from sellers as well as putting a hold on payments.

A complete list of scrap metal buying and selling FAQs can be found here.

This, however, according to some scrap metal yards in Middle Tennessee, can be easily circumvented by dishonest sellers who can take the metals out of state by driving just a couple of hours north or south.

Police have reported an uptick in catalytic converter thefts in the area, and they are asking the public to report the thefts to FPD’s criminal investigations divisions at (615)791-3237 if they believe that they may have been the victim of thefts.