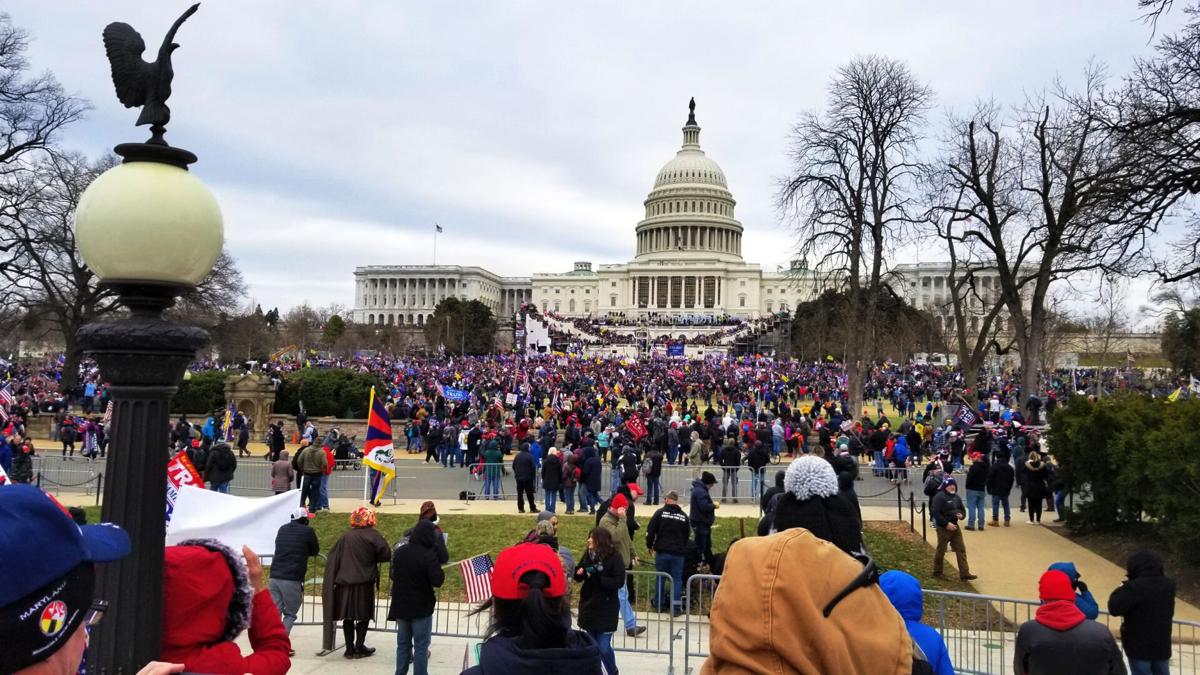 The "March to Save America" rally saw tens of thousands of people from all across the country visit the nation's Capitol on Jan. 6. 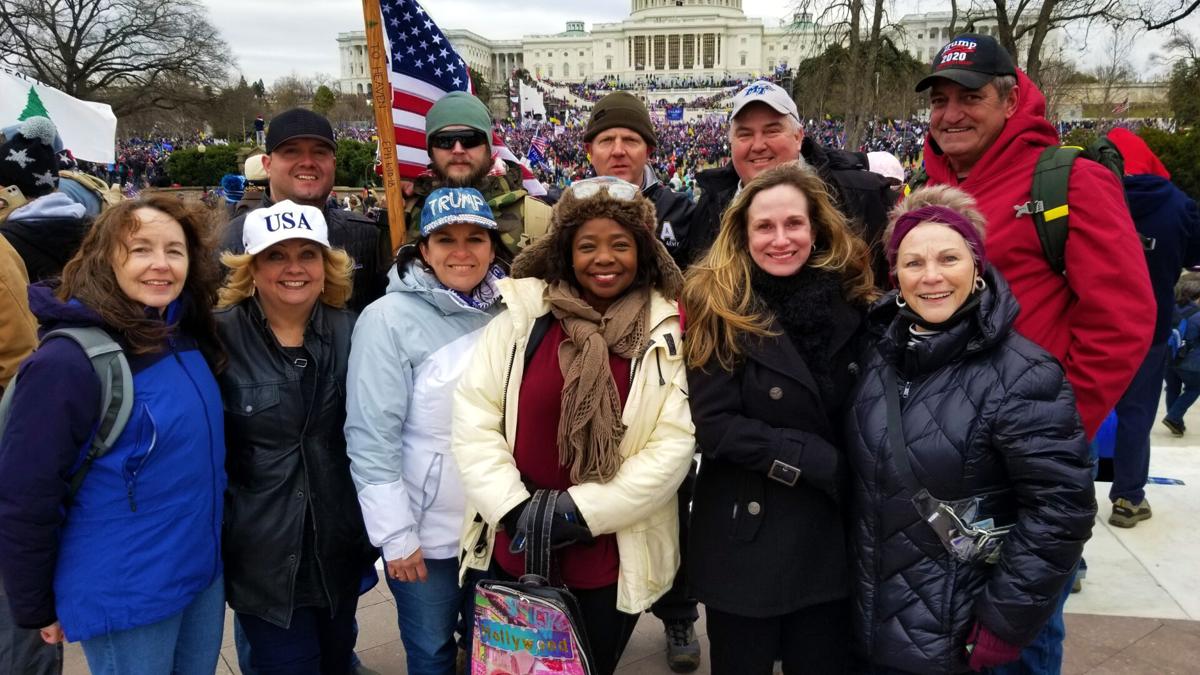 Dubbing themselves as the "Praying Patriots," the group included people from all across Middle Tennessee, including Williamson County Republican Party Chairman Cheryl Brown (second from right, front row) (Martin Plumlee is pictured in the center, back row). 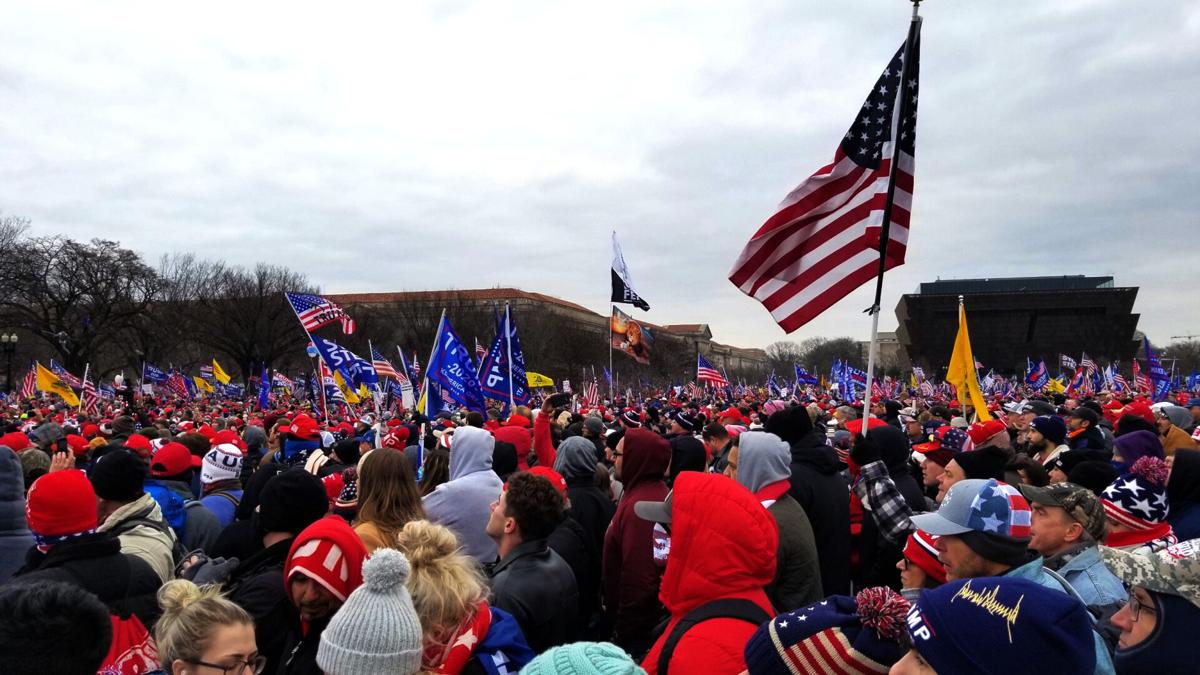 Martin Plumlee captures a photo of the Jan. 6 pro-Trump rally at the Capitol.

Martin Plumlee, a 49 year-old Franklin resident, business owner and Army veteran, was among a group of 12 Tennesseans who traveled to Washington, D.C. last week to participate in the "March to Save America" pro-Trump rally.

As millions of Americans have already seen, that Jan. 6 rally eventually concluded with a mob breaching the Capitol building while Congress was in a joint-session voting to certify the results of the Electoral College.

Denouncing the violence that later unfolded that day, Plumlee said that his group's sole purpose in traveling to the Capitol was to peacefully protest for election integrity, and maintained his belief that there were enough irregularities in the 2020 presidential election to warrant further investigation.

Despite Plumlee's and others' suggestions of there having been election fraud in the 2020 presidential race, both the Department of Justice and the FBI have discovered no evidence of widespread voter fraud.

"Our group that we put together [was a] wonderful group of people, I'm talking strong Christians, prayer warriors, people that love this country, certainly some die-hard Trump people — overall, a great mix of patriotic Americans," Plumlee said of the group he had assembled.

"Our chief motivation to go was election integrity; we owe that to our kids to keep a true democratic republic. To do this, we must have fair, open and honest elections. We went to D.C. to peacefully protest that critical principle. I can tell you that any person that I had any contact with, they were polite, they were respectful, they were Americans from all walks of life!"

Plumlee went on to describe what he and his group witnessed as things started to devolve into chaos.

"When things started getting crazy, [we heard] some pops, [we saw] the smoke — you just go, 'what is going on, these guys are getting into the Capitol,'" Plumlee said. "So there was some confusion, obviously cops start showing up... looking back, you sit there and you go, 'man, there's over a million people coming towards the Capitol, why weren't there more police around?'"

The numbers in the mob rushing the U.S. Capitol were estimated to be in the hundreds.

Plumlee went on to allege that it was "likely that other actors were involved," and that he hopes that "the ultimate truth comes out.

"There's been reports that were some people with certain affiliations," Plumlee continued. "It is not appropriate for me to comment on this matter; I don't work with or for the FBI."

Theories have been spreading through social media and beyond that the  "Antifa" movement had been involved in last week's attack, but these claims have since been widely debunked.

While not explicitly alleging members of Antifa to have been the "other actors" involved in the riotous mob that left five dead, including one Capitol police officer, claims of insurgents masquerading as Trump supporters during the riot have yet to yield any substantive evidence.

Plumlee was also critical of the killing of 35 year-old Ashli Babbitt, who was shot by police during the breaching of the Capitol building.

"The poor gal that perished, she seemed like she was very much a heartfelt, passionate Trump supporter, and she probably got caught up in the heat of the moment," Plumlee said. "I do not see how she should have died; I know many cops and it is my belief that there were other means to diffuse the situation. Disabling a suspect is one thing, ending a human life is another!"

Plumlee said one of his main criticisms in the aftermath of all the chaos was how the events were covered by the media. He argued the coverage exhibited a "double standard" when compared to coverage of the protests that erupted across the country last summer.

"During the summer there were Black Lives Matter (BLM) movements, protests in multiple cities, and I've read in a few venues that [there was] approximately $2 billion in cumulative damage," Plumlee said.

"I don't know what the damage was from last Wednesday - obviously any damage is wrong whatever the dollar amount - but you see some of the quotes from some of the congressional leaders about the protests back then... I've seen quotes from [Nancy] Pelosi and Kamala Harris about there should be more protests, and that they're going to have to get rowdier before there's real change."

The quotes of House Speaker Pelosi and Vice President-elect Harris referenced by Plumlee are commonly shared online to inaccurately depict the two as having voiced support for violent riots.

In actuality, Harris did tell Late Show host Stephen Colbert last summer that "protesters should not let up," but made no mention of riots, and has only condemned violent protests.

A quote often attributed to Pelosi in the context of last summer's protests is as follows: "I don't even know why there aren't uprisings all over the country." In actuality, those comments were made in 2018 over the separation of migrant children from their parents at the U.S. Mexico border, and were in no way related to last summer's protests.

"My point is, when it's the other side and there's a few issues, all of a sudden we go all the way to the other extreme," Plumlee said. "I feel like it's spiraled out of control in a handful of days, and that concerns me."

Giving an example as to what he meant by things 'spiraling out of control,' Plumlee said that after the Tennessean published a story about his trip to the Capitol, he had been harshly criticized online. Plumlee also said someone had reached out to him online and told him that they would never do business with his Franklin hiring firm, Plumlee & Associates.

"The BLM [protests] went on for months - this was one instance," Plumlee said.

"One time the Capitol is under siege for two, three hours - pretty short amount of time; no cars were overturned, no businesses were burned. Stuff was damaged, I got that, but if we're comparing this to that... I mean the stack over here from the summer is pretty high, this stack from last Wednesday is pretty darn low," Plumlee continued.

"I just feel like everyone's got an eraser in their pocket right now. I know we all have short memories because of the deluge of social media, but my god, just the double standards."

Rioting and violence that stemmed from the summer's protests on social justice were widely decried by both sides of the aisle, including incoming President Joe Biden.

Unlike the summer's protests, the mob attack on the U.S. Capitol has been widely labeled as an insurrection. President Trump could possibly face his second impeachment trial if the U.S. House votes to impeach him on charges of "inciting an insurrection" after his inflammatory comments made during the day's rally event.

Articles of impeachment were filed on Monday by the House Democrats.

"We're all created by God almighty, so let's start there"

Despite his criticisms of what he considered to be a "double standard" in how the media covered the Capitol riot, Plumlee said that more than anything, he wanted Americans to "work together."

Plumlee used his longtime friend, an avid Joe Biden supporter, as an example, saying that they had not allowed their difference in political leanings to impact their friendship.

"Red states, blue states... at the end of the day the flag is red, white and blue," Plumlee said. "We all bleed red, and at the end of the day we're all created by God almighty, so let's start there. We've got some problems right now no doubt, but we still can bring it back, people got to work together."