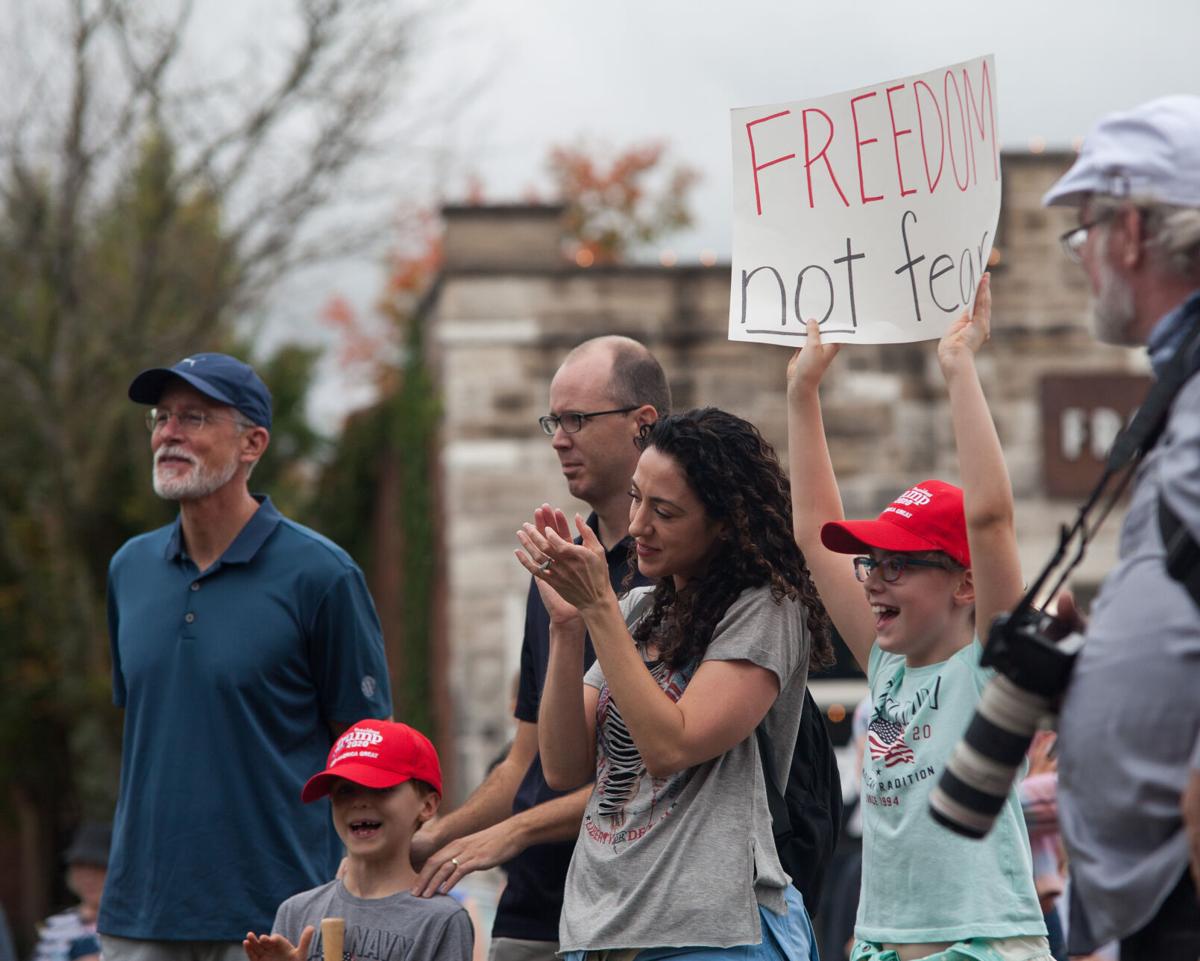 Participants at the October 11 Rally for Freedom cheer as a speaker is introduced. 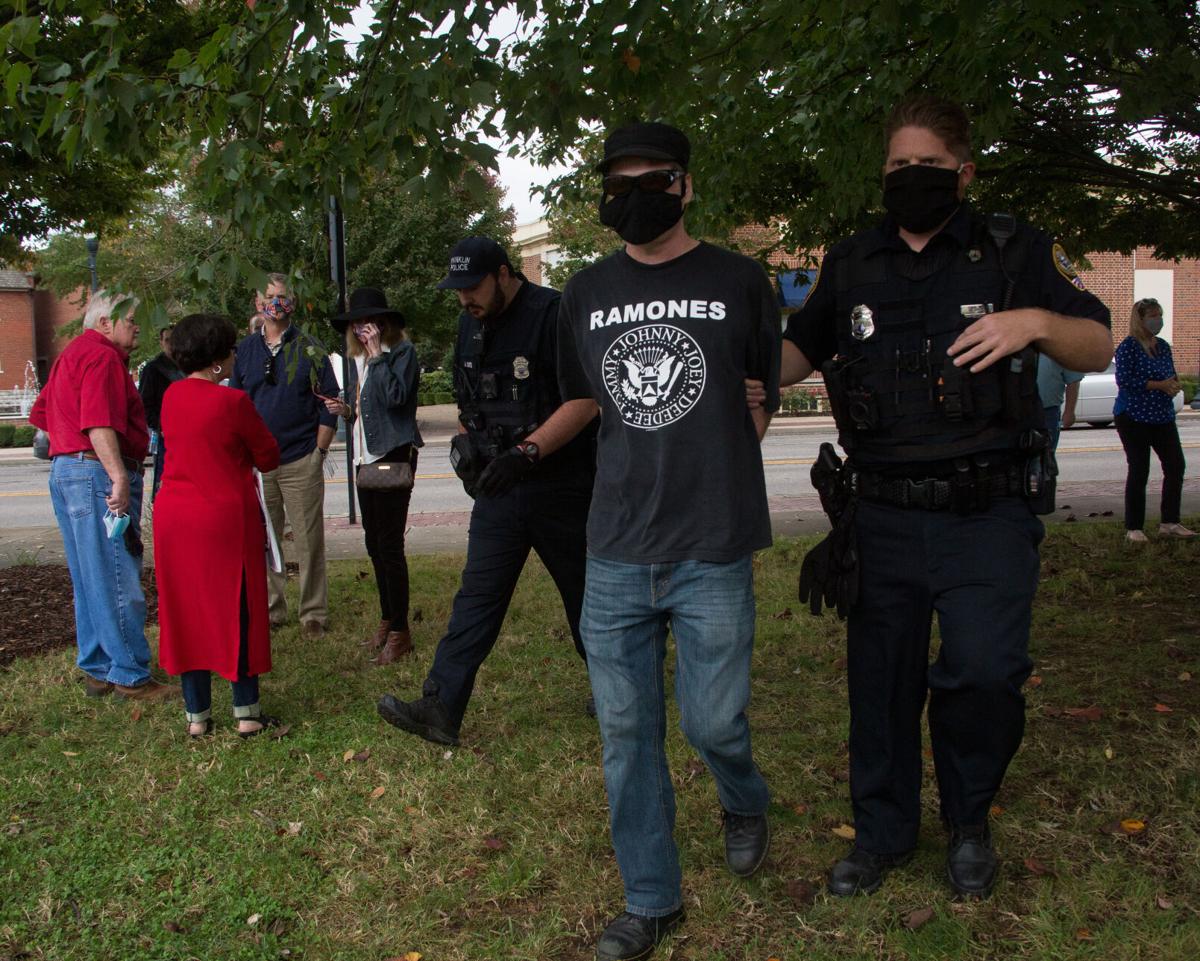 One rally participant identified as 48-year-old Daniel Martin was arrested and charged with simple assault during the Rally for Freedom. 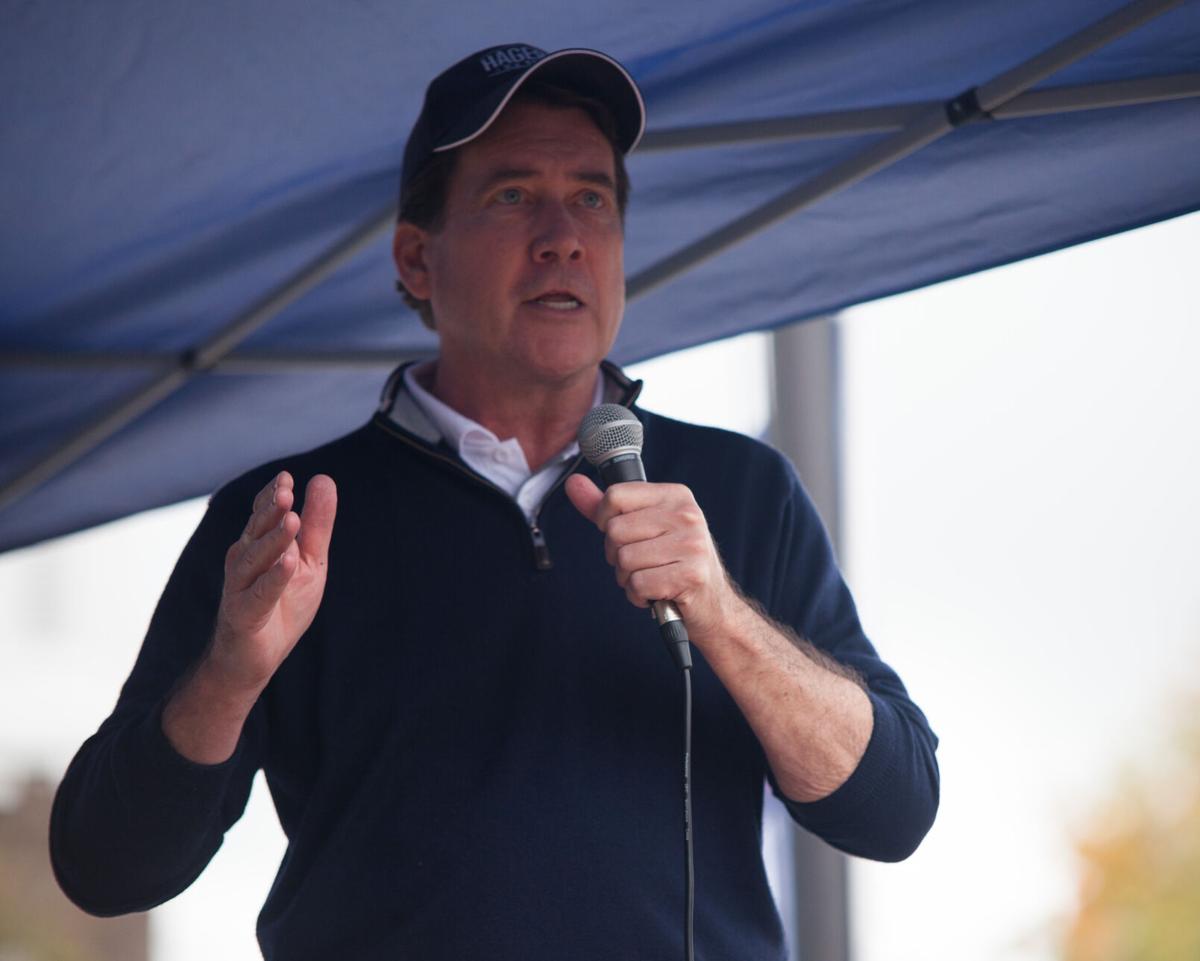 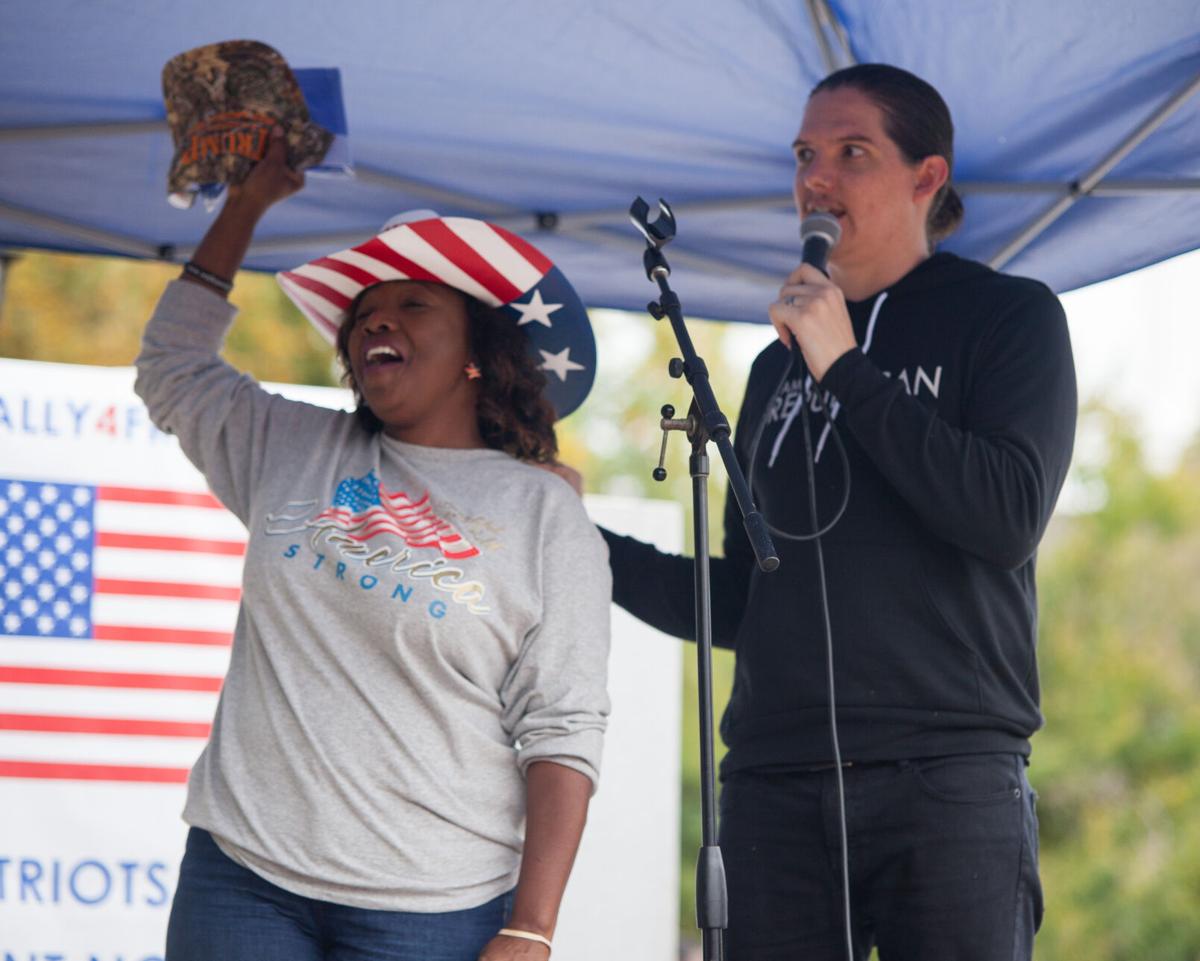 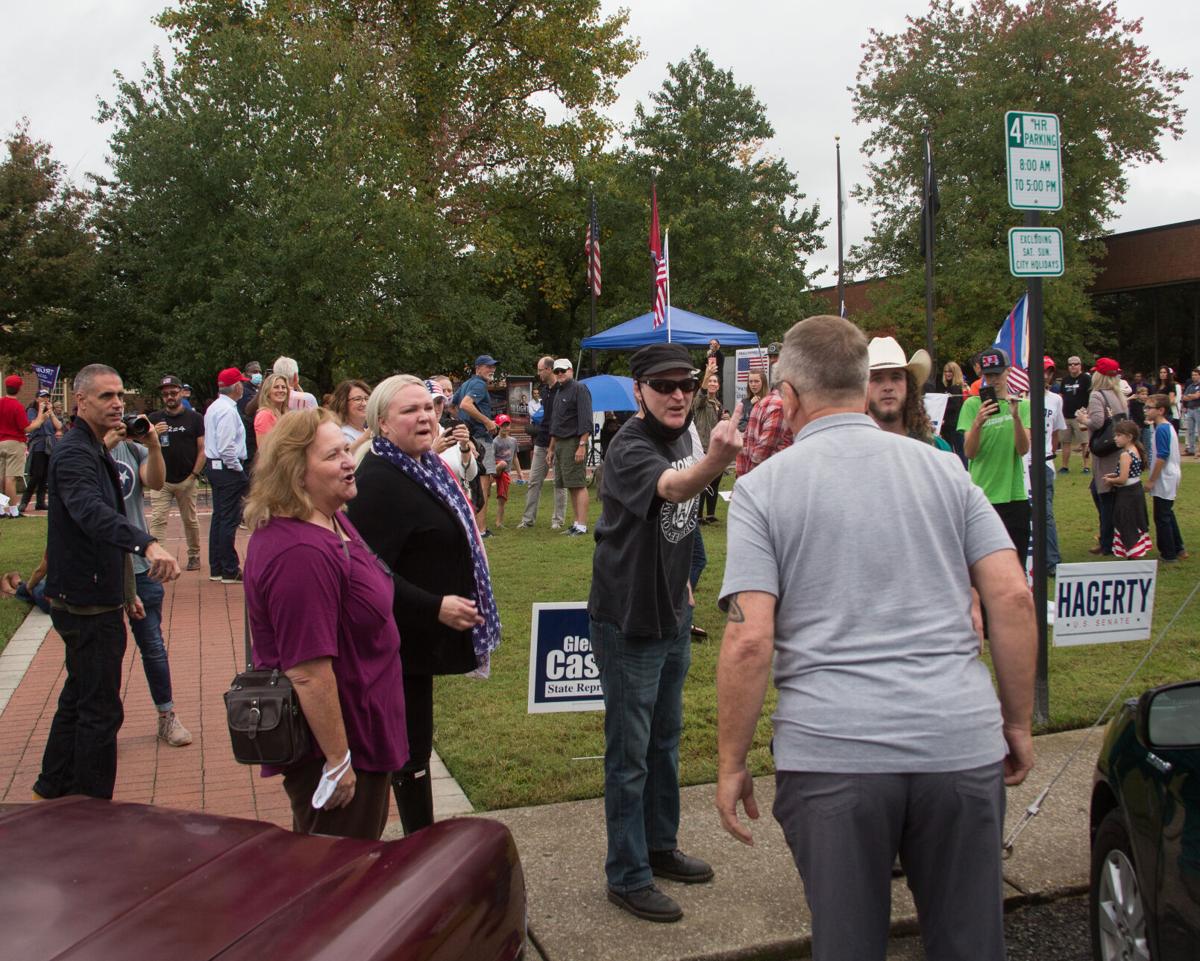 The unidentified man arrested and charged with simple assault confronts a counter protester for intentionally starting his car alarm. 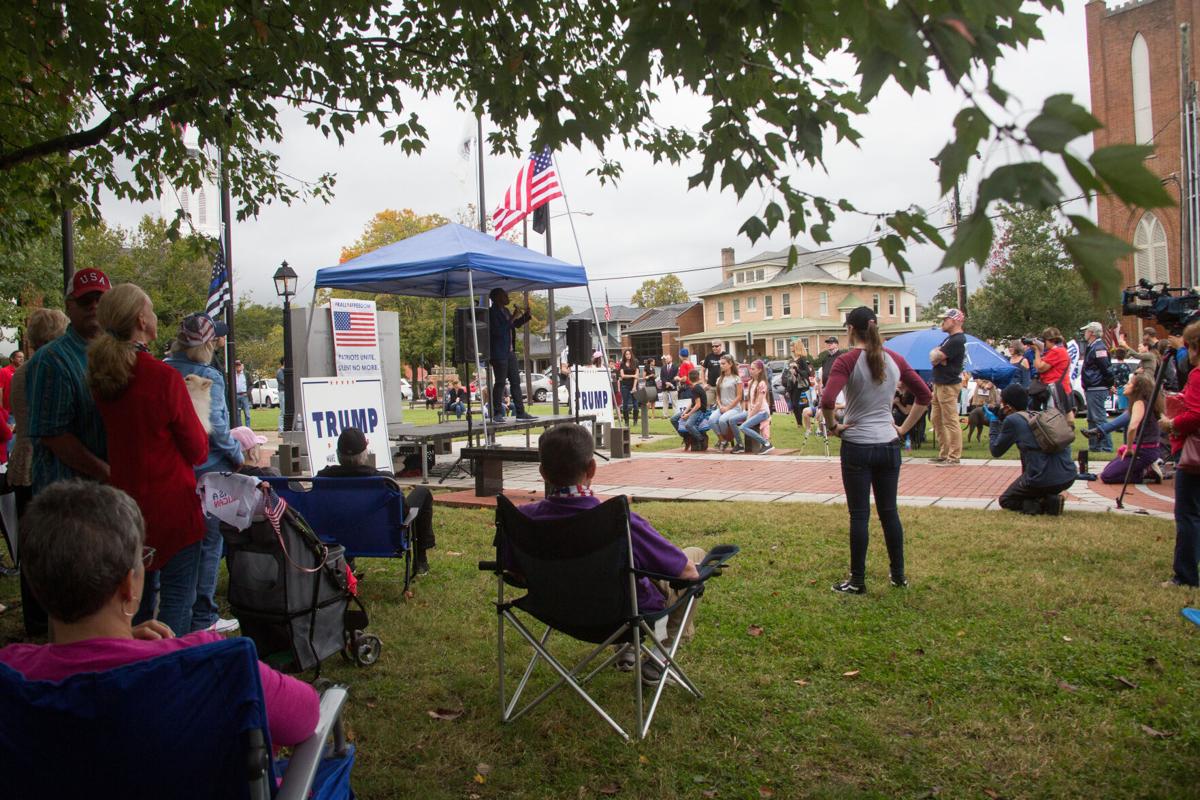 The October 11 Rally for Freedom in downtown Franklin saw well over 100 participants Sunday.

Participants at the October 11 Rally for Freedom cheer as a speaker is introduced.

One rally participant identified as 48-year-old Daniel Martin was arrested and charged with simple assault during the Rally for Freedom.

More than 100 people gathered in downtown Franklin Sunday to participate in the “Rally for Freedom,” a demonstration celebrating conservative values and leadership.

Conservative author Rob Smith and director Robby Starbuck, among others, spoke at the event.

The rally faced some opposition, however, with a small group of counter protesters honking as the rally’s featured guests attempted to speak.

At around 3 p.m., the park on the corner of West Main Street and Columbia Avenue was filled with rally participants. Not long after, the first wave of counter protesters drove north on Columbia Avenue, honking in protest of the featured Republican speakers.

In a matter of minutes, Franklin police conducted a traffic stop on one of the passing counter protesters and ultimately issued them a citation for a noise violation under Franklin ordinance 11-404.

“One down,” shouted one person at the rally as others cheered at the sight of the traffic stop.

The sound of car horns subsided after a few minutes, after which the speakers began to take the stage.

“Aren't you glad your taxes are low, [that] you have freedom to do the things that you're doing,” posed one of the early speakers, State Rep. Glen Casada.

“The reason you have this is because you have Republicans in charge of the state, and we need to return them to the [Tennessee] General Assembly, to the U.S. Congress, and to the U.S. Senate.”

U.S. Senate Candidate Bill Hagerty was also a featured speaker at the event, and warned participants of what he believed would happen were Republicans to lose control of the Senate.

“If you think about it, our nation's at a crossroads,” Hagerty said.

“Chuck Schumer's already said it: if we lose control of the Senate and they gain control, he said everything's on the table. Let me tell you what that means.”

Hagerty continued, sharing what he felt would be the consequences of the upcoming general election going favorably for Democrats.

“Here's something else they've got teed up: they're going to add two new states; D.C. and Puerto Rico. You know what that means? Four more liberal Democrat senators that would dilute our voice here in Tennessee. We've got great leadership here in Williamson County - we need to continue that.”

One of the key voices at the rally was Starbuck, the aforementioned director who has worked with such high-profile artists as Snoop Dogg and Smashing Pumpkins.

Starbuck said it was difficult to voice his support of conservatism in his home state of California, but that it was his desire to see his “kids grow up in a free country” that led him to play an active role in the conservative movement.

“Seeing what was happening on the other side, I knew we had to hone our individualism to bring us together for something we all believe in,” Starbuck said on helping organize the rally alongside the Williamson County Republican Party.

“We did this because, frankly, I want my kids to grow up in a free country. My family came from Cuba; they had everything stolen from them because of socialism and communism. So to me, even in the most privileged position in Hollywood - not having to worry about money or jobs - I knew how quickly everything can end for other people.”

In the middle of Starbuck’s speech, however, a car alarm began to sound off. It soon became apparent that it had been done intentionally, with rally participants gathering in front of the counter protester who had set his car alarm off.

“Shut it off,” shouted rally participants.

Still speaking over megaphone, Starbuck asked the rally participants to “leave him alone.”

“He’s clearly upset by the sight of a strong gay black man, a Latino man and a strong black woman up here that are standing for conservative values,” Starbuck said, referencing Smith, himself and Williamson County GOP Chairman Cheryl Brown.

“This is typical of the Democratic party in the past, they don’t like when Black people and when Hispanic people step out of line. Just let him have his tantrum, it is okay.”

With the car alarm continuing to sound off, one apparent rally participant, who had engaged in a heated exchange with a counter protester earlier, began taking photos of counter protesters.

Another counter protester, 19 year-old Aubrey Guice of Thompson’s Station, began to film the individual. Guice told the individual that she “can take a picture of [him] too” as he approached her.

“Fine, smile,” responded the individual before striking her phone into her head with his open palm.

One person was arrested today at the Rally for Freedom in Franklin and charged with simple assault. pic.twitter.com/0t5u62MiDD

As the individual left the scene, Guice and surrounding counter protesters immediately tracked down and told a nearby Williamson County Sheriff’s deputy about what had just happened.

Exactly 12 minutes after the incident, the man, who was later identified by the FPD as 48-year-old Daniel Martin, was placed in handcuffs and ultimately charged with simple assault, according to police.

In a message to the Home Page, Starbuck later condemned the actions of Martin, writing further that organizers were not familiar nor associated with the individual.

Matt Masters contributed to this report.