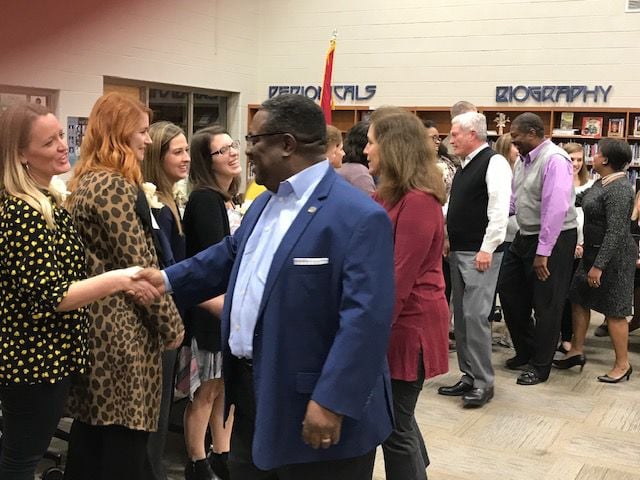 Kevin Townsel leads a line of FSSD school board members in congratulating each of the teacher who were awarded tenure at Monday night's meeting. 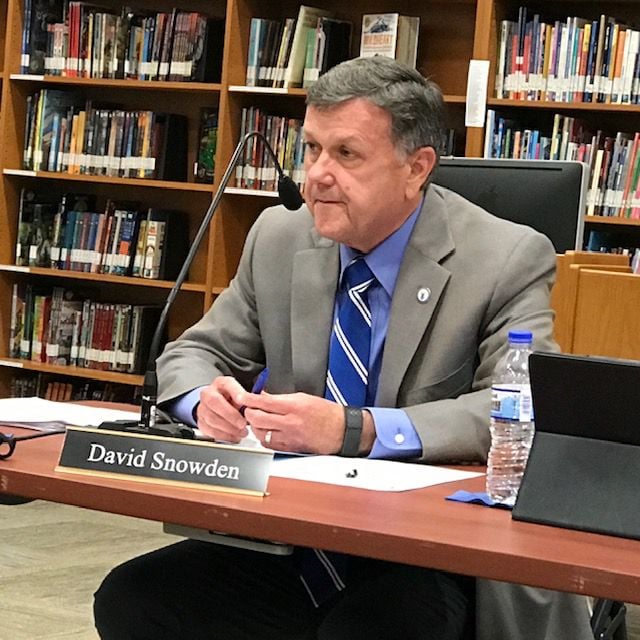 FSSD Director of Schools David Snowden listens as his scores are read from the director's performance review during Monday's school board meeting.

Kevin Townsel leads a line of FSSD school board members in congratulating each of the teacher who were awarded tenure at Monday night's meeting.

FSSD Director of Schools David Snowden listens as his scores are read from the director's performance review during Monday's school board meeting.

There were accolades all around as members of the Franklin Special School District’s Board of Education voted unanimously to recognize the director’s performance review for Director of Schools David Snowden during the monthly board meeting Monday night at Poplar Grove Middle School.

Snowden, in his 19th year as FSSD director, received a composite score of 97 on a scale of 100 from an average total of four criteria considered by the district’s six board members:

Improvement of student performance — 34 of 35 points

Provides the highest level of internal and external communication — 19.75 of 20 points

As in previous years, Snowden scored high enough to earn a bonus equal to 10% of his salary, and as he has done before, he requested that money be donated back to the district in an area he chooses.

“I’m honored and humbled by the scores,” Snowden said. “[What] we do in this district is not due to just the leadership. … But it’s due to all the work that is accomplished each day by our faculty, staff members, administrators; our parents are great contributors, and the board is so supportive.

“So without all of these things jelling together, we couldn’t be successful. These scores are more than representative of me; they’re representative of the men and women in this school district, and I’m so blessed to work with each and every one every day.”

Each of the six board members gave Snowden a vocal pat on the back.

“I think we realize that Dr. Snowden has always done an exemplary job,” Robert Blair said. “He’s also recognized throughout the state, so we’re fortunate to have him here at Franklin Special. But more than just what he brings to the table, I think he’s a friend to the board. We’re always able to go to him with issues. His door is always open. … He’s always there to listen.”

Monday’s meeting also included the board’s voting on teachers recommended for tenure, and Tim Stillings, board chairman, tied that achievement to what Snowden has done.

“Earning tenure at FSSD is not a gimme,” Stillings said. “It’s not just a five-year period to see who can stay employed in the district that long. It’s a lot of work.

“And being director of schools is not a gimme either. It involves a lot of work — it involves basically earning tenure every day.”

Nineteen teachers from seven of the eight FSSD schools were awarded tenure at Monday’s meeting after principals read letters of recommendation for each one.