The story was posted on the online publishing platform Medium.

The letter, dated June 16, demands that Ashley publicly retract her statements and that she not make "any such false statements in the future regarding Grace Chapel." The letter further reads that Grace Chapel has directed Crain Law Group to proceed with legal action if the demands are not met by Monday, June 21.

On June 12, Ashley published a piece about the allegations levied against former WSMV Channel 4 News anchor Aaron Solomon, who has been accused by his 14-year-old daughter Gracie Solomon of sexual abuse and of being involved with the death of his then-18-year-old son Grant Solomon.

Gracie also alleges failures on the parts of Grace Chapel and Grace Christian Academy for failing to protect her despite her and her mother's cries for help.

In Ashley's story, published on June 12, the blogger alleges that Grace Chapel and Grace Christian Academy 'routinely scrub their [social media timelines] of incriminating sermons, statements or videos,' with one such example being a sermon given by Grace Chapel founder Steve Berger in 2018.

In the sermon, which is no longer available to view on the church's website, Berger spoke about the then-ongoing Brett Kavanaugh hearings which saw Christine Ford levy accusations of sexual assault against the Supreme Court nominee.

The cease and desist letter claims Ashley's story contains "several material misstatements regarding Grace Chapel Church which, taken as a whole, present false and defamatory publication and which cast the church in a false light." 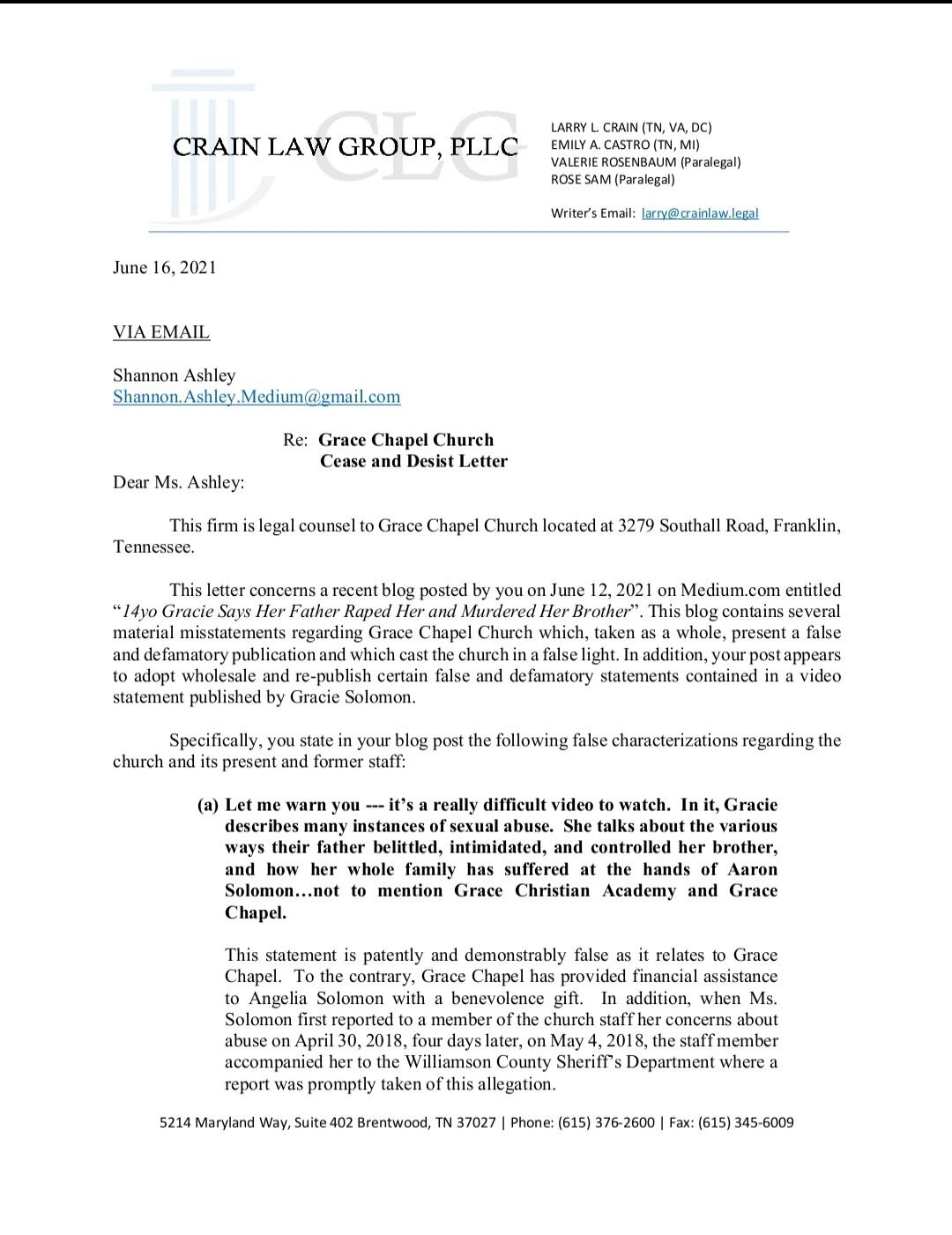 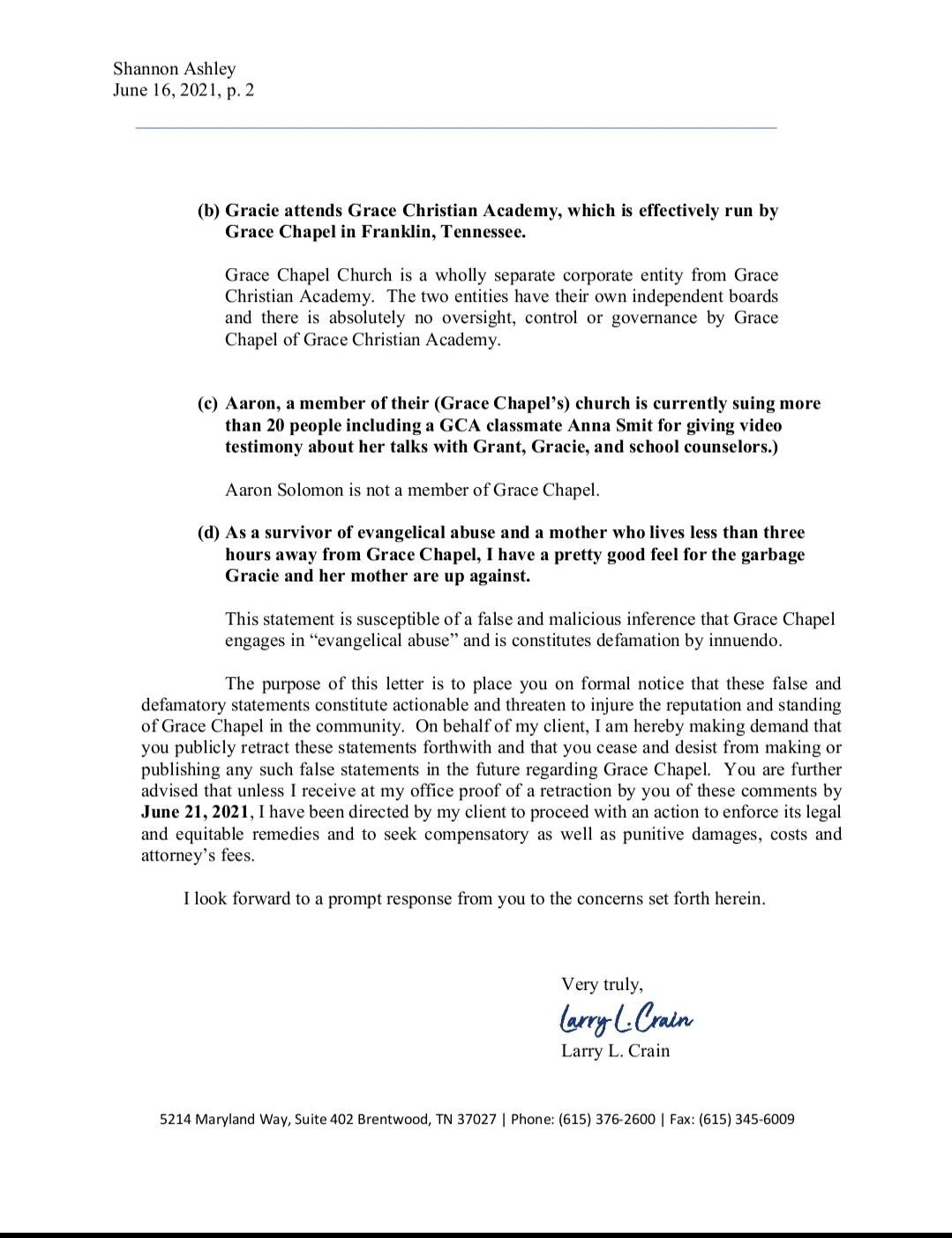 The first statement, where Ashley writes how Gracie had described how "her whole family suffered at the hands of Aaron Solomon" and "Grace Christian Academy and Grace Chapel," was called in the letter "demonstrably false."

The letter reads that "to the contrary," Grace Chapel had provided financial assistance to Aaron Solomon's ex-wife, Angelia Solomon, and that a church staff member had accompanied her on May 4, 2018, to the Williamson County Sheriff's Department for the purpose of making a report over the abuse allegations.

Williamson County Sheriff Public Information Administrator Sharon Puckett has confirmed with the Home Page that this meeting did take place, was investigated, and the case subsequently closed, but could not comment further.

The second comment the church took issue with was Ashely writing that Grace Christian Academy is "effectively run by Grace Chapel." In response, the letter reads that the church and private school are "wholly separate" and have their own independent boards.

Despite the claim that the church and school are "wholly separate" entities, the Grace Christian Academy's website reads that the creation of the school began with talks with Berger about "the possibility of the church partnering with the school and providing the much-needed space for the school to meet."

Furthermore, the church and the school share the same address, are on the same land parcel owned by Grace Chapel Inc., and are said to be partners by Grace Christian Academy Head of School Robbie Mason.

The church also took issue with the claim that Aaron Solomon was a member of Grace Chapel, which despite him attending the church at least once, was denied as fact in the letter.

The last statement the church took issue with was the suggestion by Ashley that Grace Chapel was engaged in "evangelical abuse," with the Crain Law Group arguing that the claim "constitutes defamation by innuendo."

Rather than retract her statements, however, Ashley instead published a follow-up story detailing the cease and desist letter in greater detail.

"I’m a single mom, and if you’ve read much of my work, you know it’s been a very rough year," Ashley wrote. "There’s a part of me that wants to hide away, or, you know, run away to California and get the lipedema surgery I need. If only I could. Then again, it’s because I’m a single mom that I don’t feel good ignoring other mother’s daughters who need help."