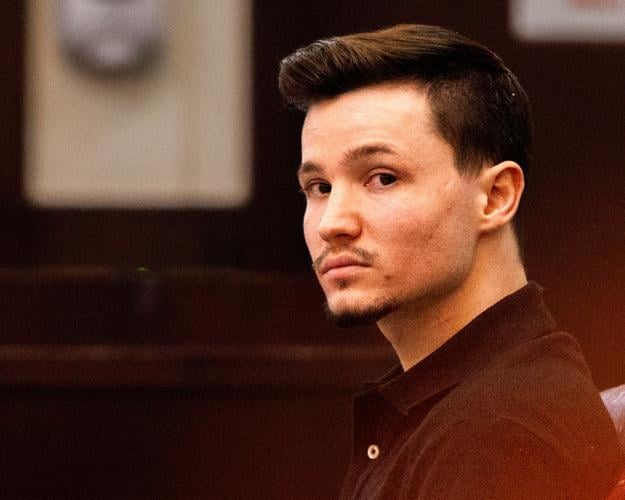 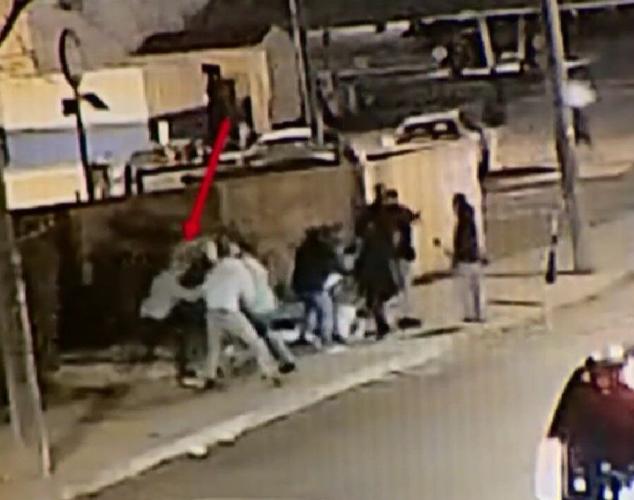 This surveillance camera still frame shows the moment that police said Michael Mosely (indicated by the red arrow) fatally stabbed one of two  Williamson County men during a 2019 bar fight. 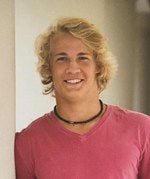 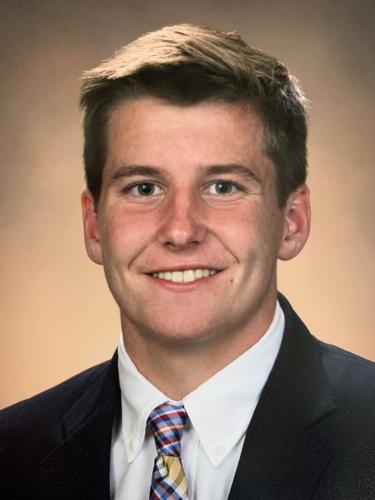 Michael Mosley was found guilty of all counts on Thursday in the 2019 stabbing deaths of two Williamson County men and the wounding of a third.

The nearly week-long trial saw dozens of testimonies from friends of the victims and friends of Mosley who were either witnesses or participants in the brawl and law enforcement officials. The jury was shown graphic video and photographic evidence of the attack that took the lives of Clayton Beathard, 22, and Paul Trapeni III, 21, and wounded AJ Bethurum, who was partly blinded in one eye as result of the attack.

Jury selection and opening statements took place on Monday, with Tuesday seeing the first testimony and evidence in the high-profile case.

Testimony and evidence continued into Wednesday and Thursday, which included additional testimonies from more friends of the victims who witnessed the fight, and from a woman named Jaycie Harper, a friend of Mosley, who was visibly nervous as she testified that she attempted to deescalate the fight moments before the three men were stabbed.

Harper testified that at least one of the men in the group with Mosley was at the bar in order to attempt to sell drugs, and that she tried to defuse a tense situation between Mosley and the group of Williamson County men inside of the bar after Mosley was told that the girl he had been hitting on wasn’t interested in him.

Thursday’s trial hearing began with testimony by an investigator from the district attorney’s office who explained to the jury why they never heard testimony from Sergio Alvarado, a man who was with Mosley on the night of the fatal altercation.

According to that testimony, Alvarado had previously expressed concerns over his safety, never returned to court and has yet to be located and arrested for defying the court order.

Mosley showed few wounds when arrested, most notably a laceration to the webbing of his right hand between the thumb and the index finger and a small cut on the same index finger where the finger meets the palm.

The jury also saw a photo of a black, folding pocket knife that was found inside of a car that was registered to Mosley which had been impounded and processed for physical and forensic evidence by the Metro Nashville Police Department.

While the knife and photos of the knife were submitted as evidence, police did not recover any evidence of blood or DNA on the knife.

The one stabbing victim who survived the attack, AJ Bethurum, also testified in the trial, detailing the fight and the stab wounds to his left eye,  which left him half-blind, and his elbow.

Mosley did not testify during the trial.

“It was Mr. Mosley’s desire to take Clay Beathard’s life, and he did,” Assistant District Attorney Jan Norman told the jury during the state’s closing argument. “Mr. Mosley intended to take Paul Trapeni from his friends and family, he intended to take his life.”

“He intended to kill AJ Bethurum, but he did fail at that,” Norman added.

The defense gave their own brief closing arguments which reiterated some facts of the case, but notably did not include any defense of Mosley’s character. The prosecution issued a rebuttal that detailed why they said a self-defense argument wasn’t applicable to the case.

Two women were declared alternates and released from the jury pool which was then made up of seven women and five men. They were dismissed for lunch at 12:53 p.m. and would take control of the case after lunch, at approximately 2 p.m.

The verdict was returned after just about an hour of deliberation. Mosley showed no reaction to the verdict.

Mosley is currently serving a 12-year prison sentence for a different assault case, and now faces the possibility of life in prison when he is sentenced on May 26.