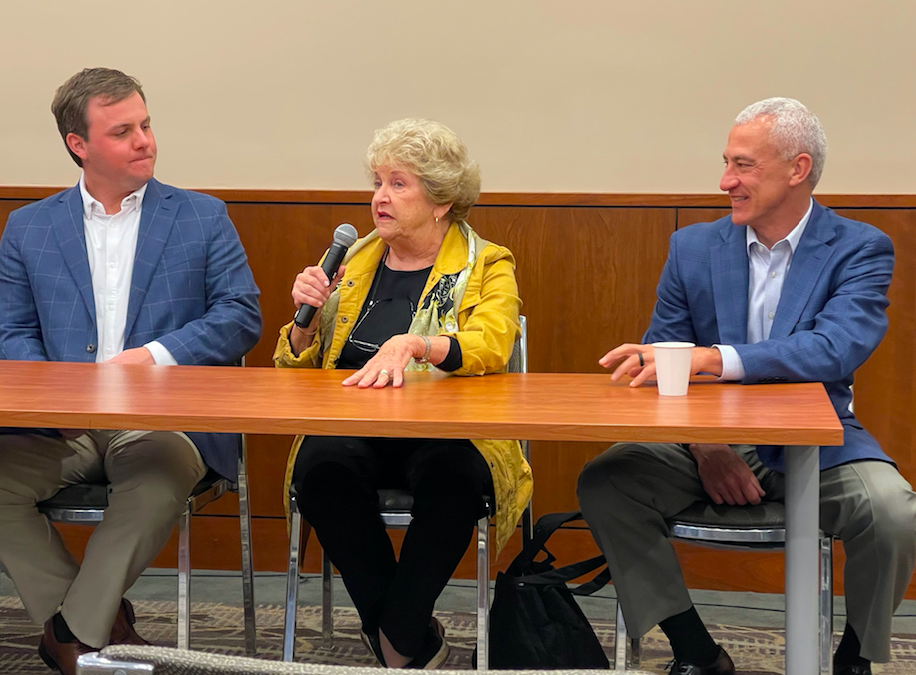 Patrick Baggett (left) and Scott Speedy listen as retiring Alderman Margaret Martin talks about her time on the Franklin Board of Mayor and Aldermen. 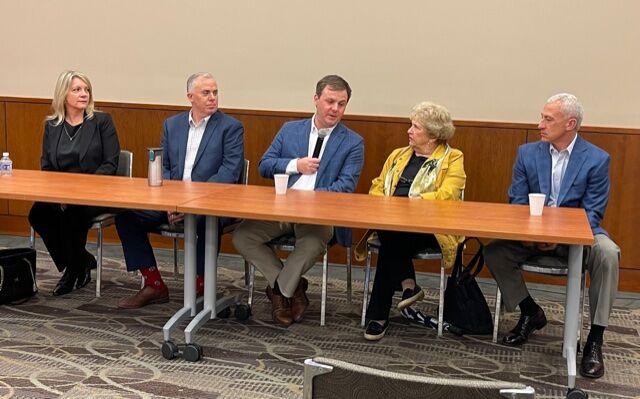 Three of the four winners in Tuesday’s Franklin election for aldermen were given something of a pep talk combined with caution by one of the senior members of the Board of Mayor and Aldermen.

Margaret Martin, Ward 4 alderman who is retiring from the board after serving for the past 12 years as well as for eight years in the early 1980s, assessed what the position means as a guest Friday morning on Policy Talks presented by Williamson Inc. and held at the Williamson campus of Columbia State Community College.

Martin was on a panel that included Scott Speedy, Ward 3 alderman who is also stepping down, and recently elected Gabrielle Hanson (alderman-at-large), Jason Potts (Ward 3) and Patrick Baggett (Ward 4). Ward 2 was not represented, as both newcomer Matt Brown and outgoing Alderman Dana McLendon were absent.

Dave Crouch, who moderates the monthly Policy Talks programs, asked Martin to summarize her time as an alderman in Franklin.

Martin added that new aldermen may not fully realize how much of their time is required to serve.

Crouch asked each of the newcomers to touch on three hot button issues, items they would have discussed ad nauseam on the campaign trail — smart growth, traffic and quality of life.

“I don’t call it smart growth; I call it cautious growth,” said Hanson, who won over three other candidates to fill the seat left vacant from the death last year of Pearl Bransford. “Do we have the infrastructure, the money, the roadways, the schools, the fire departments? … Are we staying true to the characteristics and landscape that are working within. Are we encroaching too much into nature?

“But I do believe in growth. If you’re not growing you’re dying. So we do have to balance it out. We just have to really think about what we’re doing and not just jump right in.”

As a resident of downtown Franklin, Baggett said the topic of traffic hits home.

“I don’t love traffic,” said Baggett, who beat Elizabeth Downing Wanczak to take over the Ward 4 seat Martin is leaving. “But it is a natural byproduct of this wonderful place. So we do have some tools we can deploy to address that as a city.

“One of the first areas I’d like to focus on if I can get seven others (board members) to get onboard is to really look at the downtown area… There always seems to be a traffic situation. I’m hopeful that the Mack Hatcher extension (scheduled to be completed Nov. 30) will relieve a lot of that. I want to make sure we can measure that and look at actual numbers.”

Potts, who narrowly edged Michelle Sutton to replace Speedy’s seat in Ward 3, said he looks at quality of life as a practical matter.

“When I first think about quality of life, I’m also thinking safety of life,” he said. “[With traffic], I’m very concerned about response time for our police and fire and emergency first responders to get around town right now. if anything happens between 3:30 and 6:30 in the afternoon, they’ve got to go down Highway 96, and in almost any direction there are delays there.

“When I look at our future and maintaining and preserving that, I’m also looking at how do we proactively support our police, fire and first responders.”

The four new aldermen will be sworn in at the Board of Mayor and Aldermen's next regular meeting Tuesday, Nov. 9.