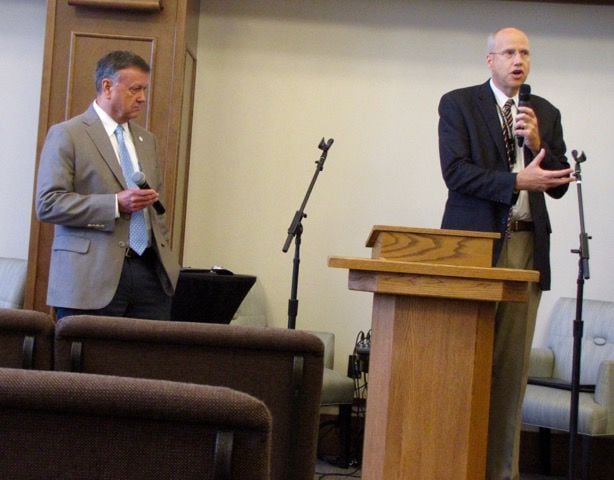 Jason Golden (right) of WCS and David Snowden of FSSD talked about issues their schools are facing. 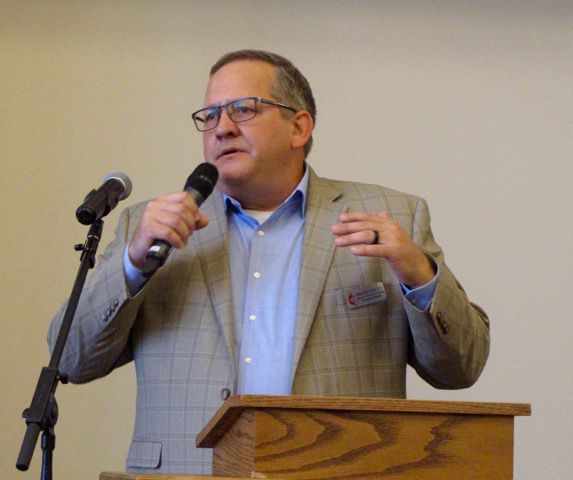 Jason Golden (right) of WCS and David Snowden of FSSD talked about issues their schools are facing.

With the primary focus on vaping and bullying, heads of the two public school districts in Williamson County recently met with leaders from the faith community to discuss the possibility of working together to help solve some of the issues students and parents are confronting.

Williamson County Schools Superintendent Jason Golden and Franklin Special School District Director of Schools David Snowden spent about an hour talking about the main concerns they face as school leaders, interacting with some of the pastors and other faith leaders who attended the meeting at Franklin First United Methodist Church.

The forum was hosted by the organization Pastors for Tennessee Children.

“Pastors for Tennessee Children is grateful for the faith leaders who participated,” said Brad Fiscus,a board member on the nonprofit who also serves the Fourth District for the WCS Board of Education. “Mr. Golden and Dr. Snowden shared some important concerns and ways that faith communities can and should partner with their school districts.”

Though there’s a balance that must be reached in terms of the separation of church and state and how the First Amendment applies to schools, Snowden and Golden said that doesn’t mean the two entities can’t find a way to work together.

“It still takes a village to raise a child,” Snowden said. “I know our villages are not small like they once were, but unless we work together as partners — our families, our faith communities and educators — we’re never going to be as successful as we could be.”

Top of mind at last week’s forum was the issue of vaping, a concern that is now considered a crisis among middle school and high school students.

“Vaping, in our opinion, has become a crisis quickly,” Golden said.

“One thing we’d like to ask of you is,” he later said to the faith leaders, “if you have techniques that have made some inroads, whether it’s addictions or vaping, we’d love for you to share those techniques with us because we are looking for multiple ways to address this problem. You can’t solve the problem with just one approach. It could give parents some knowledge of what might be going on. We certainly don’t have a monopoly on solutions.”

While vaping in schools is a relatively new concern, the issue of bullying has been around for a long, long time. Making matters worse are the technological advances that have entered the fray.

“Bullying has been around for generations,” Golden said. “A few generations ago, if there was bullying going on at school, [the victim] would get a break when they got home. But with social media, what we’re finding is, … bullying more often than not is happening outside the school. The bullying behaviors have shifted so much from face to face, the online bullying will not leave a child alone. Threats have become serious.”

Snowden said the FSSD is experiencing the same frustrations.

“We’re definitely seeing more bullying on social media,” he said. “If you think about in-person bullying, it used to be one or two people doing the bullying. But now it is students piling on. You end up with one child [being bullied] and maybe 10 or 12 people [doing the bullying] on social media, and that’s overwhelming. They’re like sharks and there’s blood in the water.”

Fiscus, director of the Next Gen Discipleship ministry in the Tennessee Conference of the United Methodist Church, said Pastors for Tennessee Children has held similar events elsewhere and ultimately seeks to build support for public schools.

“Our group has hosted similar meetings in Chattanooga and Knoxville with faith leaders and several school leaders,” he said. “We desire to build a strong network of support for public education across the state of Tennessee.”

Pastors for Tennessee Children is an independent ministry and outreach group comprised of pastors and church leaders from across the state, mobilizing faith communities in Tennessee to support quality public education opportunities for all Tennessee children.