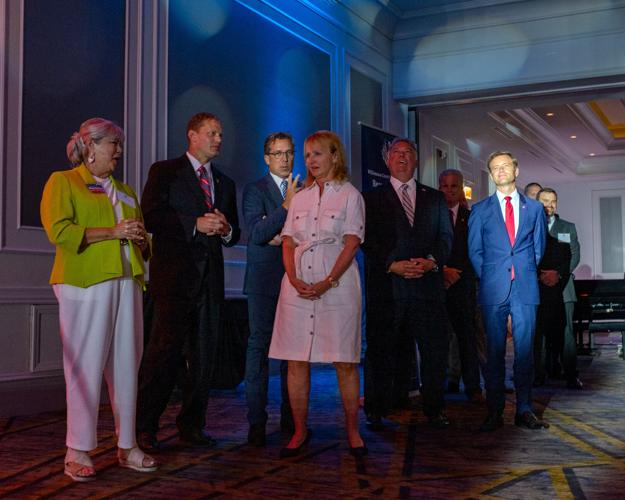 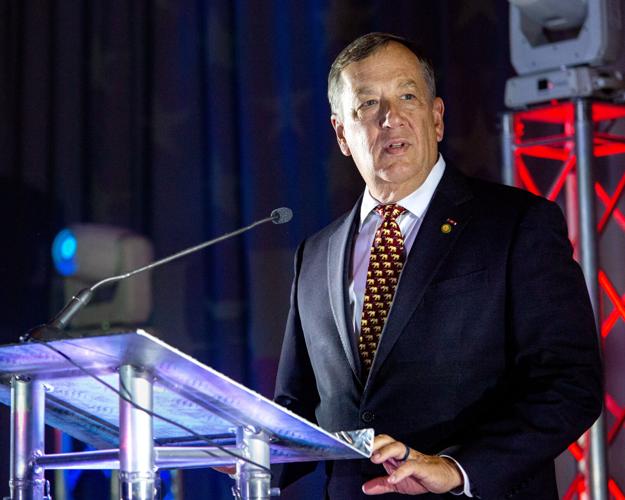 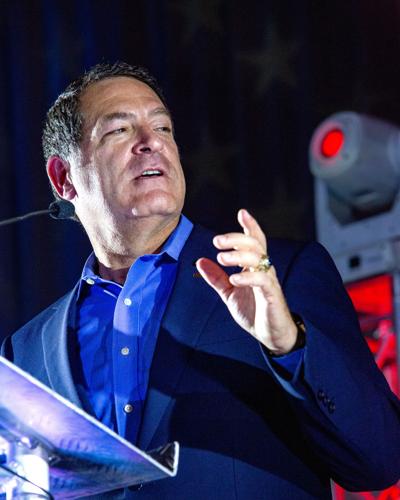 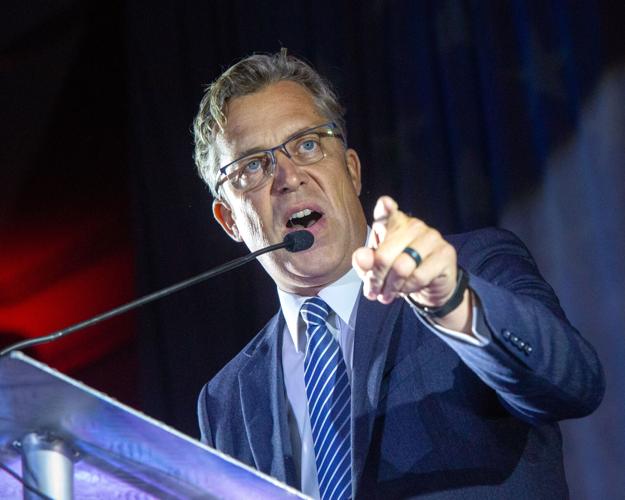 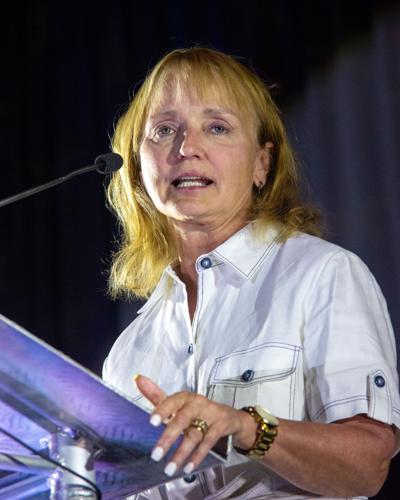 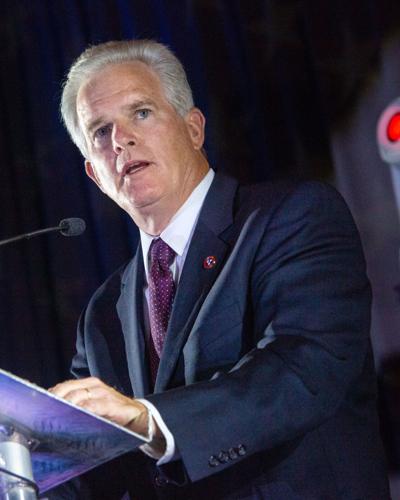 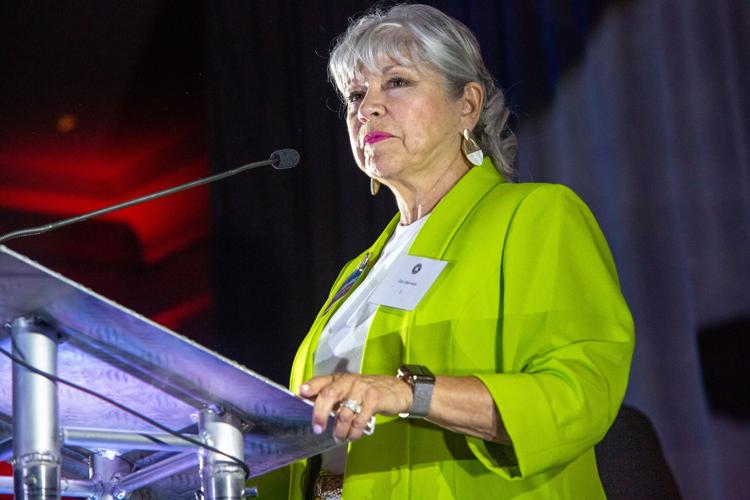 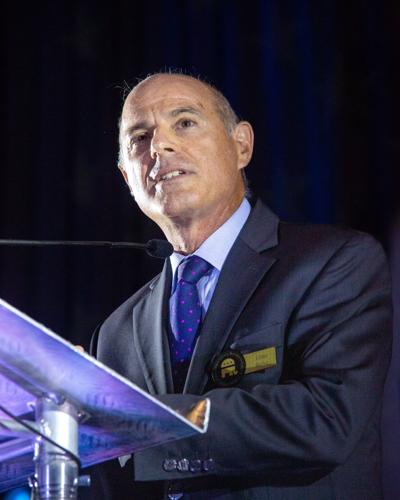 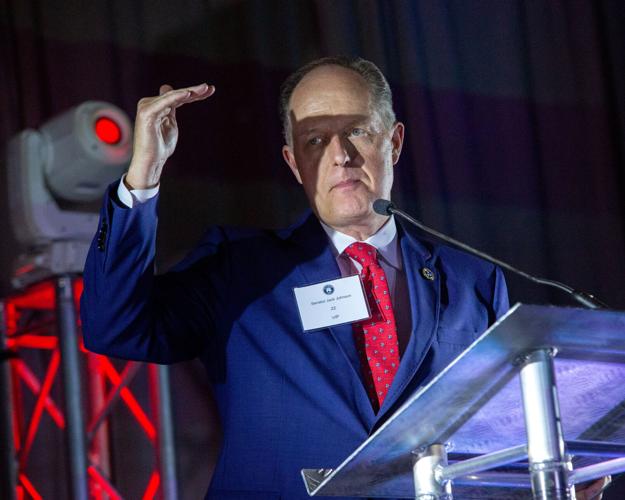 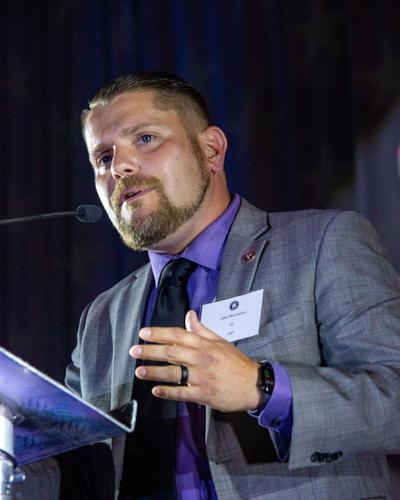 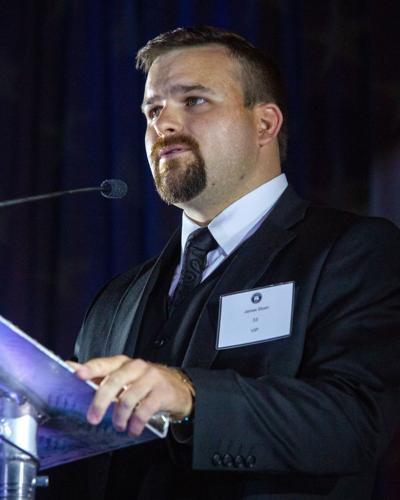 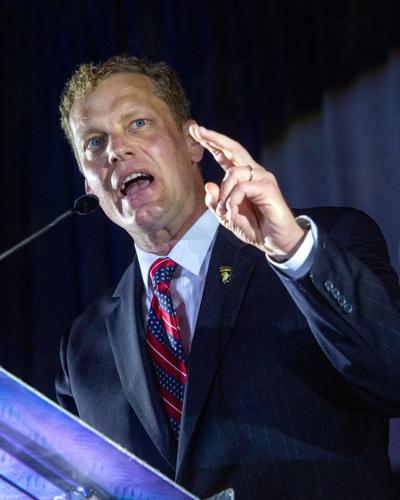 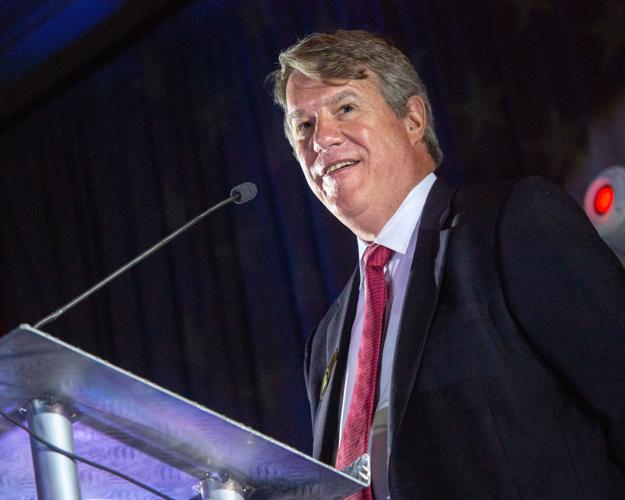 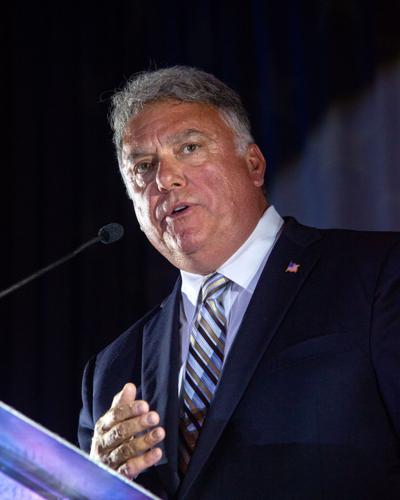 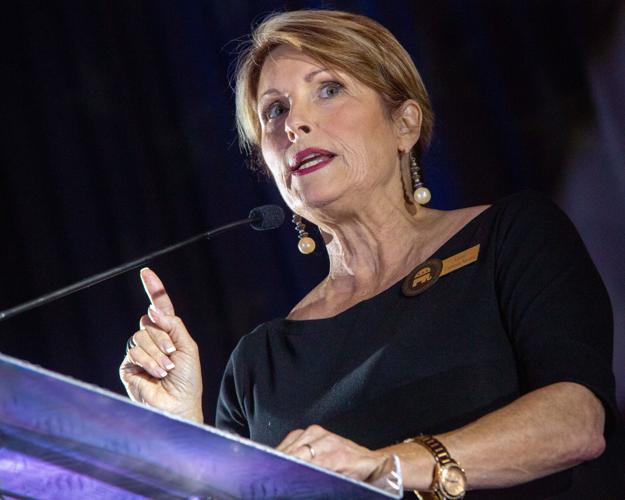 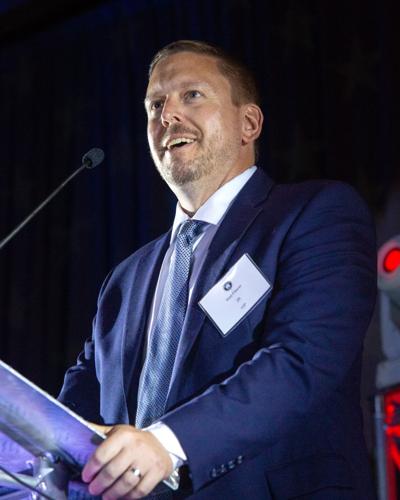 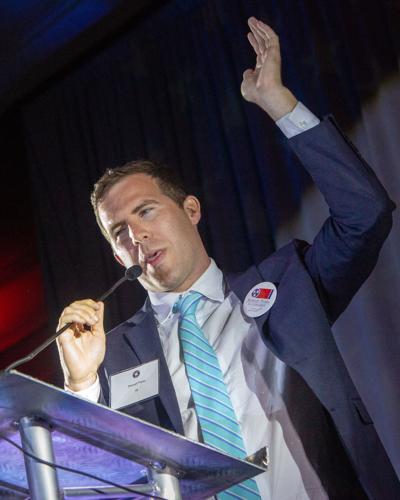 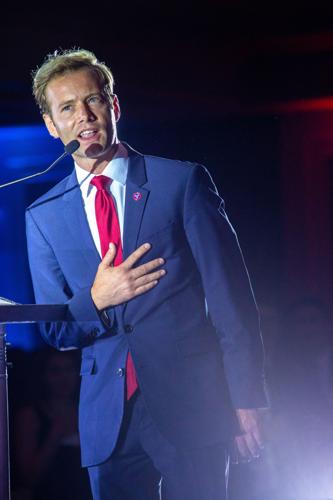 More than one dozen Republican Party congressional and state representative candidates pitched themselves to voters on Saturday during the Williamson County Republican Party’s annual Reagan Day Gala in Franklin.

That change means that Green no longer represents a sizable chunk of Williamson County, where much of his financial support is based.

“I just want to say how disappointed I was to lose part of Williamson County,” Green told the crowd on Saturday. “It has been my honor to represent you, and all of you, in the United States Congress.”

The first batch of candidates who took the stage is running for Tennessee's 5th Congressional District, but not all of the candidates in the race were present at the event.

“You don't know me, because I haven't been out participating, but it got to the point of being so frustrated and have to stand up,” Jeff Beierlein said, outlining that his three electoral goals would be “economic stability,” border security and getting “the federal government the hell out of our lives for things that should be handled at state, local level and out of the schools.”

“I want to represent the people of the fifth district, and I will do it perfectly in that way. I'm not interested in being a Congressman, I want to represent you,” Geni Batchelor said, leaning on faith in her plea to voters that it’s time to “turn the face of the United States of America back to God. And we need to look to him and offer our prayers and turn away from the wickedness that is trying to impress itself on the American people and trying to lead us in a wicked direction.”

Former State Speaker of the House and former Chair of the Tennessee Republican Party Beth Harwell touted her local and state-level experience.

She said she wanted to take to the federal role in order to take a stand against what she deemed as federal overreach, specifically citing the existence of the United States Department of Education, too much federal spending and border security.

“We need to return domestic problems and domestic issues back to the state government where they can be more efficiently and effectively run,” Harwell said.

One of the more engaged speakers with the audience was sitting Maury County Mayor Andy Ogles, who drew applause from the crowd as he took the stage.

Ogles has been an outspoken political figure through the ongoing COVID-19 pandemic. He also spoke at Stop the Steal rallies in Tennessee following the national election in 2020, though claims of widespread voter fraud have been repeatedly debunked and shuffled out of any court.

“They destroyed our oil and gas industry. They've created these high fuel prices. They've opened our borders recklessly allowing in two million people, and they wasted your money and my money and created this inflation,” Ogles said. “When they did those things, they started a fight. It's a fight they want. That's a fight they're going to get.”

Ogles also called for the impeachment of Biden and Vice President Kamala Harris, adding that “it's certainly time to get rid of [Speaker of the House] Nancy Pelosi.”

Perhaps the party’s most colorful and divisive character is candidate Stewart Parks who touted himself as an “unvaccinated Tennessee Christian conservative” and said that the main reason that he is running for office is to “end abortion forever.”

“You elect me, I can promise you that there will never be another abortion performed on American soil," Parks said, adding that he’s “the only candidate in this race that has never called Joe Biden president.”

Parks mentioned his presence at the Capitol building in Washington D.C. on Jan. 6, 2021 during the historic coup attempt, which resulted in his federal indictment on the charges of entering or remaining in a restricted building, disorderly conduct, violent entry on capitol grounds and theft of government property.

Parks told the crowd that he was “peacefully present” at the insurrection, adding that his third reason for running is to “fix our education system." He called for the United States Supreme Court to overturn the 1962 decision in Engel v. Vitale and the 1963 decision in Abington School District v. Schempp.

“Once that happened, our public schools have never recovered,” Parks said. “Well, you've got to get these Bibles back in the schools.”

Parks also said that he has a “zero tolerance towards illegal immigration,” believes in the completely permitless carrying of guns, rallied against changing norms around gender and identity, and effectively called for an end to legalized gay marriage in what he deemed to be a “pro-heterosexual marriage” stance that he said other politicians have now imitated.

Retired U.S. Army Brigadier General and businessman Kurt Winstead leaned on his military experience in his appeal to voters.

“I wanted to ensure that the next generation of Americans would always have the opportunity to enjoy freedom, opportunity and hope for a better tomorrow,” Winstead said. “Now, from small town, USA, where I grew up to Brigadier General, I had been blessed by the good Lord. But now I want to offer myself for service again, and this time in the United States Congress, to fight for your conservative values, and I need your help.”

Candidate Tres Wittum’s showmanship took center stage as he led the crowd in recognizing the state flag of Tennessee, turning away from the crowd, placing his hand over his heart and reciting the official “Salute to the Flag of Tennessee” poem in order to show voters that his goal is “saving America with Tennessee values.”

“And although we need to find quick solutions to the problem of now, and we will. We've got to start thinking of what our country looks like in the year 2100, because what we do today matters tomorrow for our kids and our grandkids.” the state senate aid said, specifically citing his concerns over national security including cyber security, national debt, intellectual property rights and “energy efficiency.”

The next group of candidates are running for the Tennessee State of Representatives in Districts 61, 63 and 92, all of which are made up in part by portions of Williamson County.

Candidate Gino Bulso cited founding father President Thomas Jefferson as he rallied against what he said has been federal overreach from “out of control federal spending.”

“I have a plan to use the 10th amendment to bring the matter before the United States Supreme Court under its original jurisdiction to rein in this out of control spending and this out of control federal overreach that we've seen for the last five decades,'' Bulso said. “The American Revolution did not end when Cornwallis surrendered to Washington at Yorktown. The fight for freedom and liberty goes on every day.”

Political newcomer Bob Ravener leaned on his military and business experience, saying,“Williamson County is where my focus is going to be. We've built a special thing here because of the traditional family values, the great school system and the great quality of life. And we've got to really buckle down to manage this growth over the next 20 years as we double this population, and keep the special place of Williams County that we built up until now.”

Laurie Cardoza-Moore, who was recently appointed to the Tennessee State Textbook Commission despite concerns over her pro-Israel activism that has been deemed by some as “anti-Muslim,” received applause as she took the stage.

“I have been fighting for the unborn, on education issues for our children and the right to defend Israel and stand against the oldest hatred of antisemitism. And I've been doing this for 33 years. But the most important part of my platform is education,” Cardoza-Moore said, saying that she has been fighting against the “indoctrination” of children for the past decade, specifically saying that she aims to end the federal Department of Education.

Candidate Jake McCalmon said that the “future is bright” in Tennessee, citing his position that he will “fight” to “always protect the unborn,” and that he is going to “fight make sure that not one red cent from our state government goes to fund travel to send state employees over county lines or over state lines to fund abortions,” while also championing second amendment rights and “parental rights within our education system.”

James Sloan, who works in the healthcare industry, said that he believes that unspecific COVID-19 mandates “were unjust and unconstitutional” and said that he will be “a brick wall when it comes to anything that's unconstitutional,” taking aim at education and the “crap they're trying to put in our school system.”

Thompson Station’s Matt Fitterer did not address any specific campaign issues, saying, “If you live in Spring Hill, if you live in Bethesda, if you live in flat Creek and you're interested in sending a leader, somebody who can lead with integrity, to get results and add to our conservative values here in Tennessee. I'd appreciate your vote on Aug. 4.”

Candidate Jeff Ford was the last to take the stage where he said that his main reason for running is because he is scared about the world that his soon-to-be first grandchild will grow up in.

“If we don't stand up now, they control the legislature, take control of our country,” Ford said. “I fear for the education system and I fear for the liberties she will have.”

Sitting State Sen. Jack Johnson, who is also running for re-election, then took the stage, where he addressed the large pool of candidates.

“Let me say something about all these gentlemen and ladies and all these folks that are seeking office to represent our county,” Johnson said. “I want to say thank you for your willingness to put your name on the ballot to serve our amazing Williamson County."

"Thank you, thank you," he continued. "And I give you this commitment, whoever wins on Aug. 4, I want to be the first one to write you the check and endorse you to win in November because we want to make sure these these seats stay in the hands of Republicans from the top of the ballot to the bottom of the ballot here in Williamson County.”