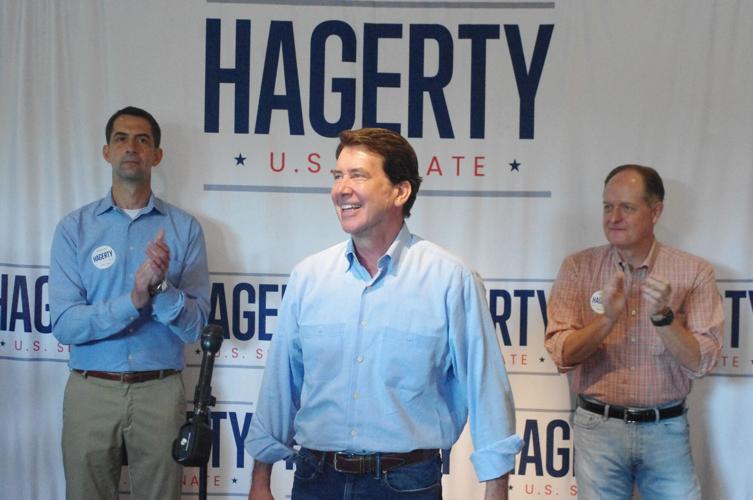 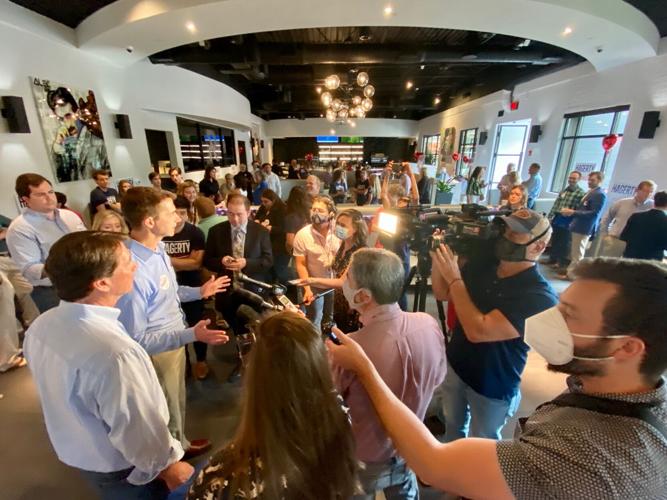 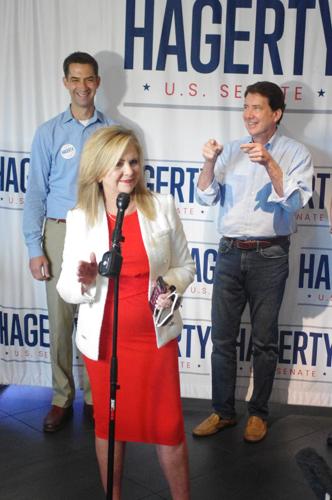 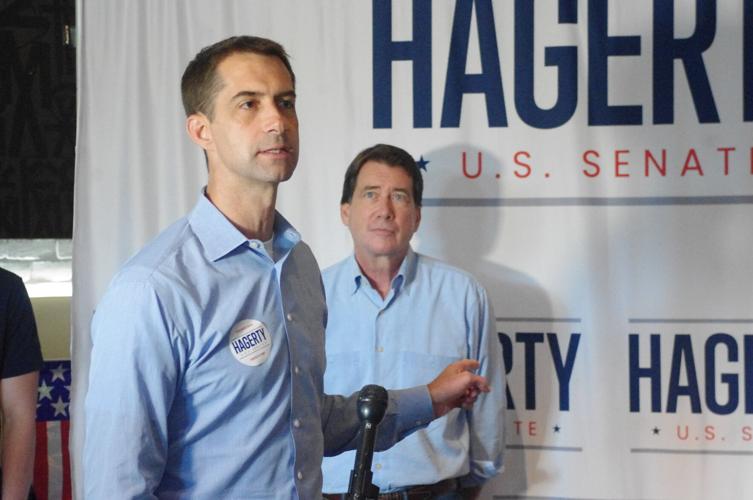 Sen. Tom Cotton singles Hagerty out as the only U.S. Senate candidate running in Tennessee who publicly supported Trump during his 2016 election. 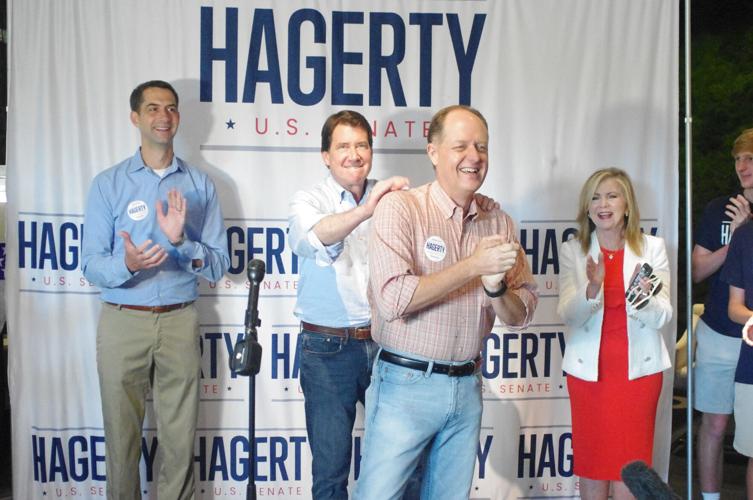 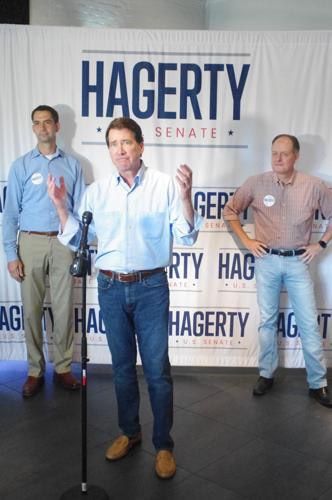 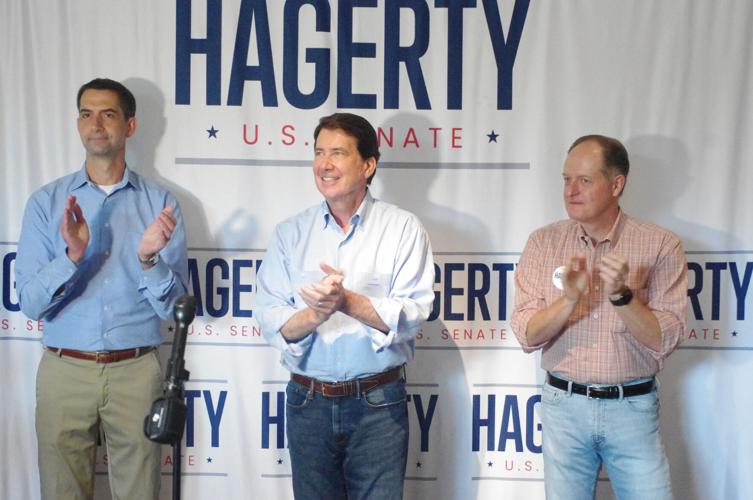 With well over 50 people convened inside the Franklin restaurant, which had been adorned with patriotic materials like flags and red, white and blue tassels, State Sen. Johnson kicked off the event by posing a simple question: “Is it great to be a Republican in Williamson County?”

As the audience responded with thunderous applause and cheers, Blackburn made her way to the microphone and shared a few words of her support of Hagerty.

“What we're going to be able to do is send a consistent conservative to the U.S. Senate — not someone who is conveniently conservative because it is politically expedient,” Blackburn said, appearing to reference Hagerty’s Republican opponent Manny Sethi.

“What we want to represent us is somebody whose philosophy of life and of government is interwoven with those conservative principles, that you don't have to worry where they're going to stand or how they're going to vote.”

Hagerty said of Blackburn that they had been friends and allies “for a long time,” and vowed to stand alongside her and Cotton if elected in "standing up to China," who he had previously called America’s “biggest threat.”

“We've worked on the fight to deal with China in the past, and I look forward to working alongside her and Sen. Tom Cotton in the future to hit China where it hurts, to get our jobs back, to no longer be dependent on China for our medical supplies, our antibiotics... we're going to make 'made in the U.S.A.' the theme of America again,” Hagerty exclaimed.

“And Marsha's exactly right: We have a real choice to make here. We have the opportunity to put a true Trump conservative into office to stand alongside Blackburn and to make sure you have two solid conservative senators representing Tennessee.”

“Only one person in this race was back in 2016 helping President Trump get elected. I volunteered full time for six months to do it, I was the only person that stepped up and did this, while we have other candidates that wouldn't lift a finger or donate a dime to President Trump, or any other Republican presidential candidate for that matter.”

Cotton, who has served in the U.S. Senate representing Arkansas since 2015, spoke highly of Hagerty during the event, and highlighted the Senate hopeful’s long history in supporting President Donald Trump — something, he argued, none of Hagerty’s Republican opponents had done “when it wasn’t popular.”

“You hear a lot in politics [about] people claiming to be a fighter,” Cotton said.

“Well, there's one way that you can tell who's walking the walk and who's just talking the talk — who was fighting when it mattered? Who was making sure that we elected Donald Trump? It was Bill Hagerty in 2016.”

“When it wasn't popular in a lot of circles, when a lot of Republicans sat on the sidelines, Bill Hagerty was there from the beginning, working tirelessly to make sure that Donald Trump won Tennessee, that he won the presidency, and that we were able to restore a conservative to the White House.”

“That's why Donald Trump asked him to represent our great nation in Japan, that's why Trump hasn't just endorsed Hagerty in this campaign, he asked Hagerty to run to be your senator in the first place.”

With Blackburn having to leave the event early due to a 9 a.m. meeting, Cotton shared a few final words on why he was such a strong supporter of Hagerty.

“We can be confident that when Hagerty gets to the U.S. Senate, he will be a fighter for Tennessee, for Tennessean families, and for the United States of America,” Cotton said.

“He won't go the way too many other Republicans have gone over the years, he won't fold in the face of pressure, he won't ship our jobs overseas, he won't bring in millions of foreigner to take our jobs here in the United States. He will be standing strong for American jobs and American families.”