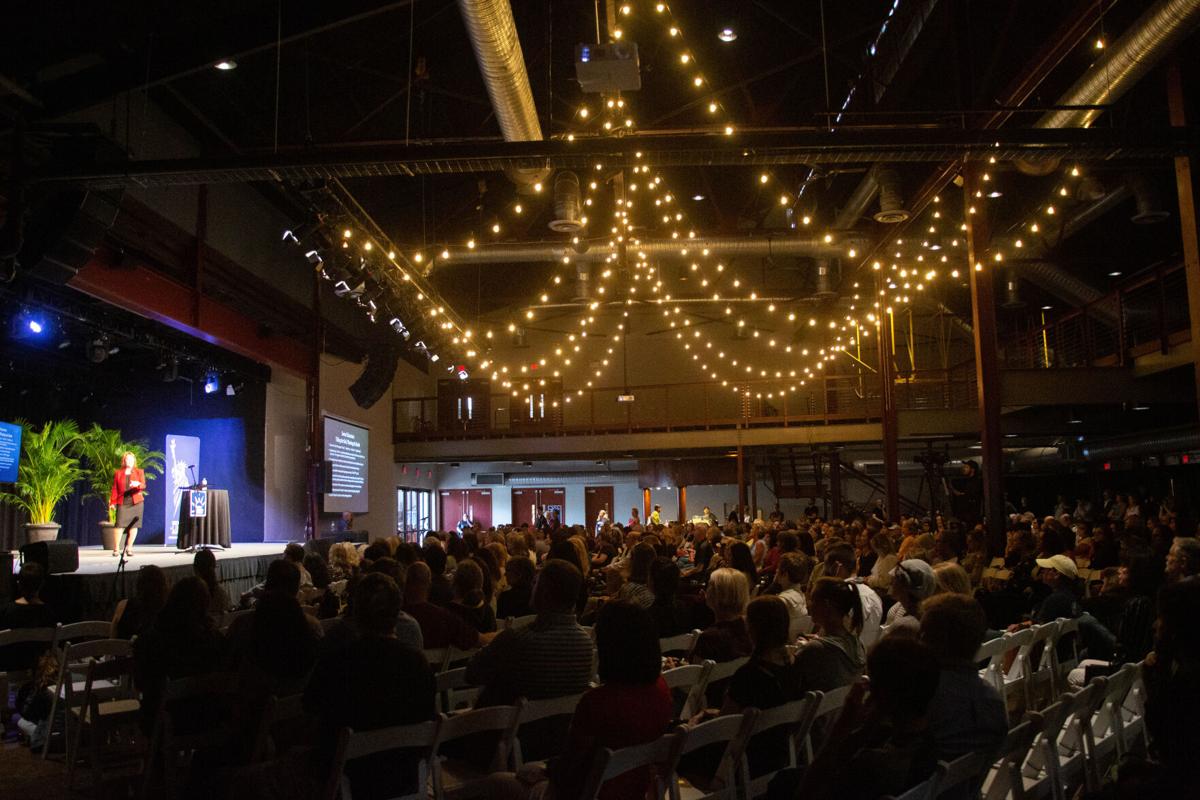 Hundreds of Williamson County parents attend the "Critical Race Theory 101" seminar at the Factory in Franklin. 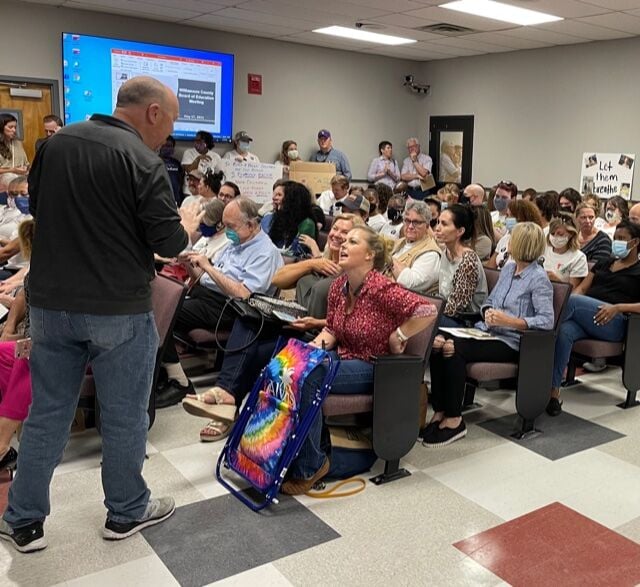 Board member Jay Galbreath speaks with parents prior to the start of Monday night's Williamson County Board of Education meeting. 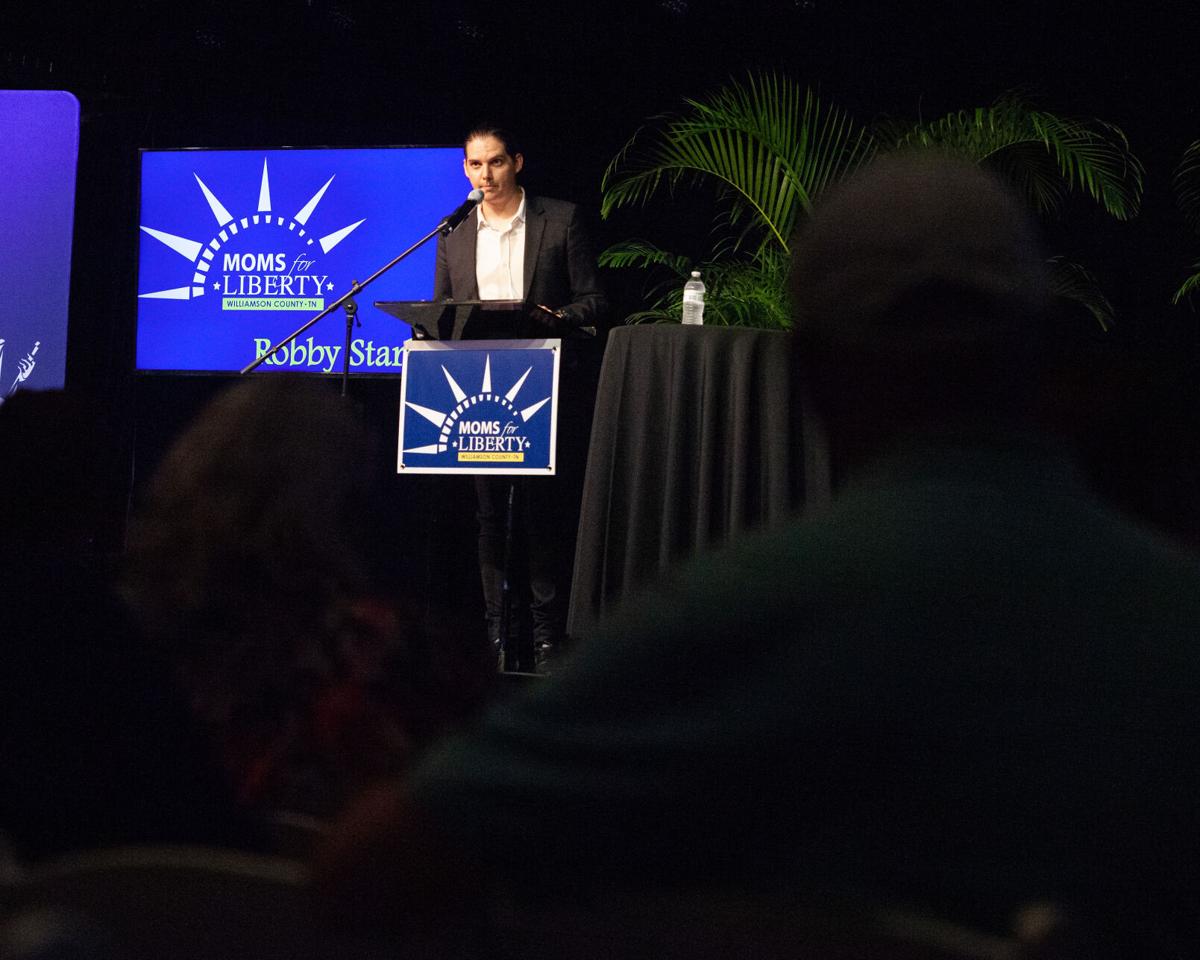 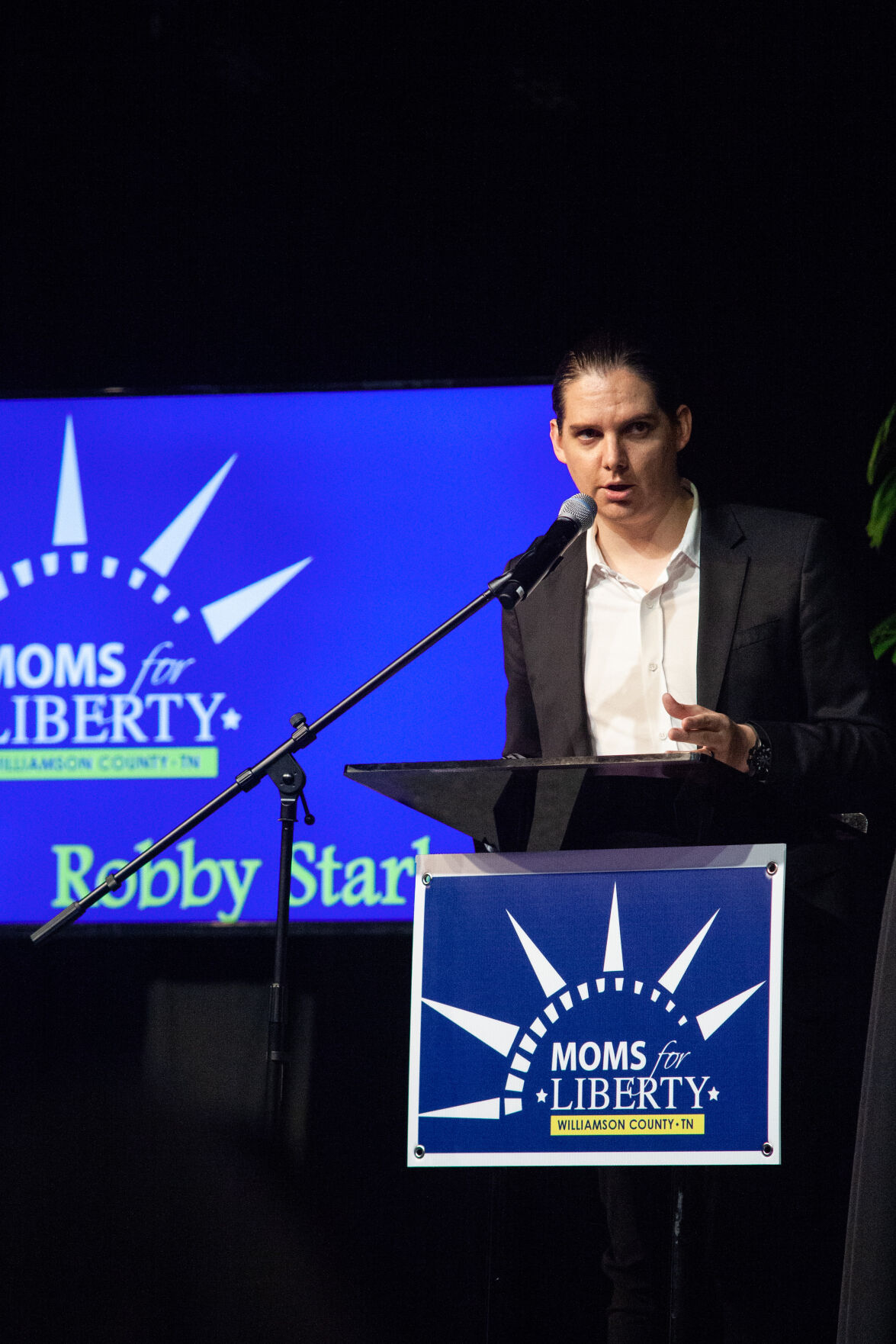 Robby Starbuck is planning to run against Democratic Congressman Jim Cooper in 2022. 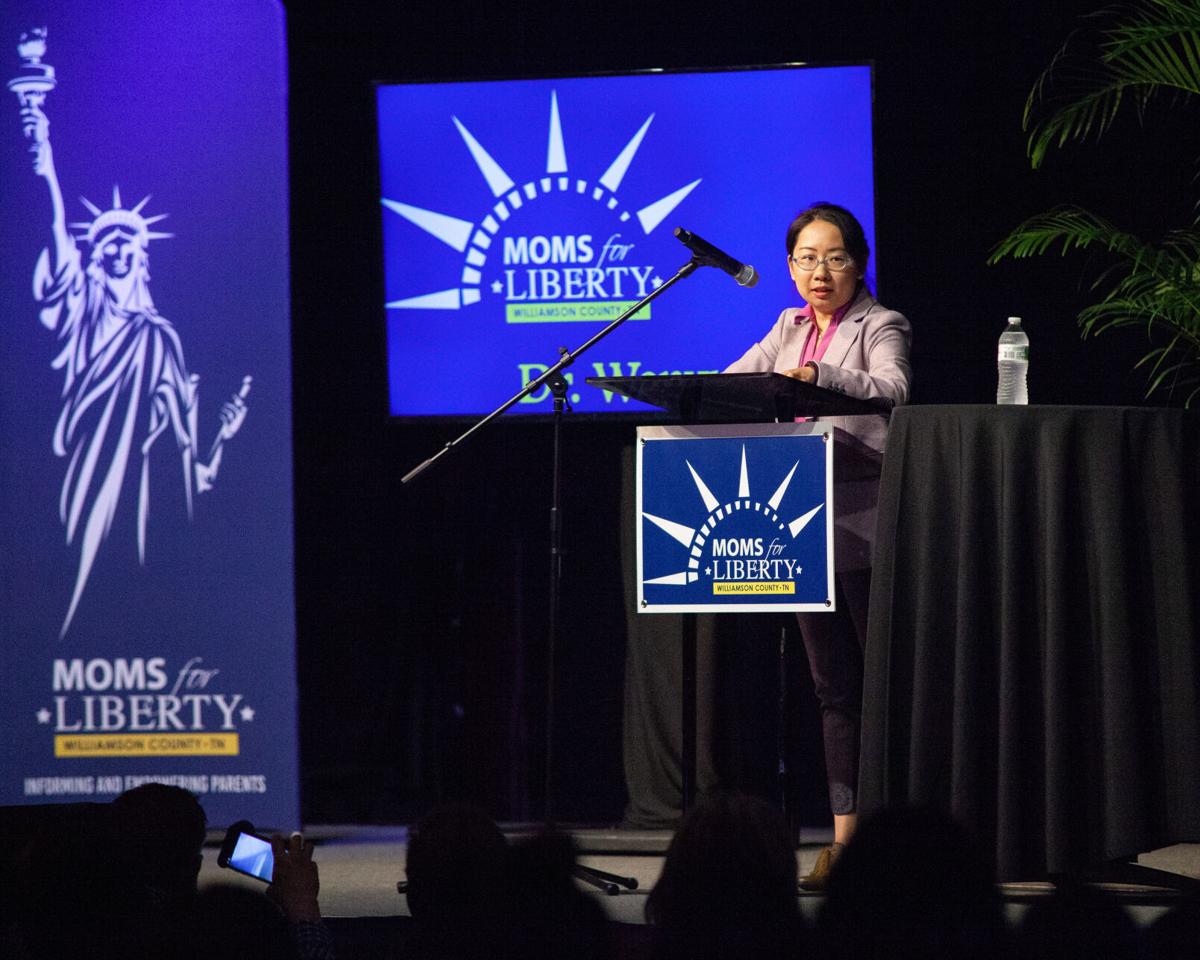 Wenyuan Wu speaks out against the teachings of critical race theory in Franklin.

Hundreds of Franklin parents were gathered at Liberty Hall in the Factory of Franklin Wednesday night to attend "Critical Race Theory 101," a seminar organized by the Williamson County Chapter of Moms for Liberty.

Moms for Liberty is a national organization that says it aims to "unify, educate and empower parents about various issues affecting public schools and students."

Critical race theory (CRT) is an academic concept that argues racism to be a social construct according to the nonprofit organization Education Week, and that racism is both "the product of individual bias or prejudice" and "something embedded in legal systems and policies."

Proponents of teaching CRT argue its value as a tool to examine and address racism, whereas opponents argue the academic concept "encourages discrimination and other illegal policies targeting whites, males and Christians," per the conservative media outlet The Center Square.

Many conservatives also argue CRT is intrinsically linked with Marxism, the school of thought that originates from the German philosopher Karl Marx that paints a critique on the effect capitalism has on the working class.

The idea that CRT is linked with Marxism was also discussed heavily during Wednesday night's seminar.

Williamson County Schools Superintendent has remained adamant that CRT is not being promoted in his school district.

Nevertheless, some parents have argued that elements of CRT are being taught through the school district's new culture strategy plan, which aims to "improve and sustain diversity and inclusion practices."

Golden has since insisted that the consultant firm hired to help the school district with its culture strategy plan is "not writing curriculum." Williamson County parents have come out in both support and opposition to the new initiative.

"The goal of critical race theory is Marxism"

Starbuck, who is a Hollywood director and producer, conservative figure and soon-to-be Republican challenger to Democratic Congressman Jim Cooper, was among the guest speakers that night, and spoke out against CRT and what he considered to be its ties to Marxism.

"The goal of critical race theory is Marxism; it's what will appear to be a new type of racism in America, but it's really not new," Starbuck said.

"This is something that has permeated in color revolutions and in Marxist revolutions all of the world. A lot of people may not understand the connection to Marxism."

Starbuck then pointed to who he considered to be one of the "chief architects" of CRT, activist and author Ibram Kendi.

"[Kendi] said you cannot be anti-racist unless you are anti-capitalist, so that tells you right away the solution to this is the elimination of capitalism," Starbuck said.

"One of the people he works with - Cheryl Harris, UCLA Law, another pioneer of CRT - she actually just recently said 'property rights are a function of whiteness - to achieve equality, we need to dismantle whiteness and therefore dismantle property rights, and then redistribute wealth.' Does that sound like a good idea to you guys?"

A wave of "no's" erupted from the crowd.

Starbuck also shared an anecdote involving his son who attends a school in Tennessee. Starbuck said that his son, a Latino, was asked by his teacher to instead use the term "LatinX" to refer to his ethnicity.

The term LatinX was popularized in the mid-2010s to remove the gendered language of the terms Latino or Latina to be more gender-inclusive of people who identify as non-binary. Despite the intent of supporters of the phrase, a Pew Research study has found that in 2020, around 25 percent of U.S. Hispanics have heard of the phrase, and of those, only 3 percent use it.

Opponents of the term LatinX argue it to be a form of linguistic imperialism, with an op-ed from The Phoenix newspaper arguing that the term "effectively serves as an American way to erase the Spanish language."

"So the question is, why are they pushing something that's so wildly unpopular?" Starbuck posed.

"That's the entirety of critical race theory; this has nothing to do with racial justice, racial equality or racial anything. This has to do with control and Marxism because since the beginning of history, when Marxists wanted to take control of a country, they divided people by race. The most dangerous thing to Marxists is the unity of a country where we stop looking at each other by the color of our skin and start looking at each other for the content of our character."

Another featured speaker was Wenyuan Wu, the executive director of the Californians for Equal Rights Foundation, a nonprofit organization. Wu had also taught CRT as a professor, but later renounced the academic school of thought.

"Critical race theory sees everyone and everything from a race-based perspective," Wu said.

"In short, CRT is rooted in a hodge-podge of fringe theories to politics; it is a contested and explicitly political theory that examines all our social relations, economic, governance and policy outcome through the prism of race, and prescribes, essentially, race-based and race-obsessed solutions to all social yields."

Wu went on to mirror Starbuck's concerns, arguing that CRT was something of a trojan horse for other ideologies and beliefs.

"However, instead of staying in its monkey cage as a strictly academic matter as should be the case, CRT has increasing become a monolithic ideological foundation for broader cultural and political trends, attempting to reshape and reengineer our society," Wu said.

Thompson, a doctor of clinical and forensic psychology and co-founder of Early Life Child Psychology, was also a featured speaker at the event. A black man with biracial children, Thompson argued vehemently against the teachings of CRT, pointing to how he believed such ideas would affect his own kin.

"I'm not up here because I'm a Democrat, a Republican or an activist, I'm none of them - I am a father," Thompson said.

"Critical race theory will destroy my children. Think about it: you're biracial and you're hearing from one side 'black is great,' but the other side of you is systemically broken. You don't have to be a clinical psychologist to know what that dichotomy would do to a child or a young adult: it would destroy them, so that's why I'm here tonight."