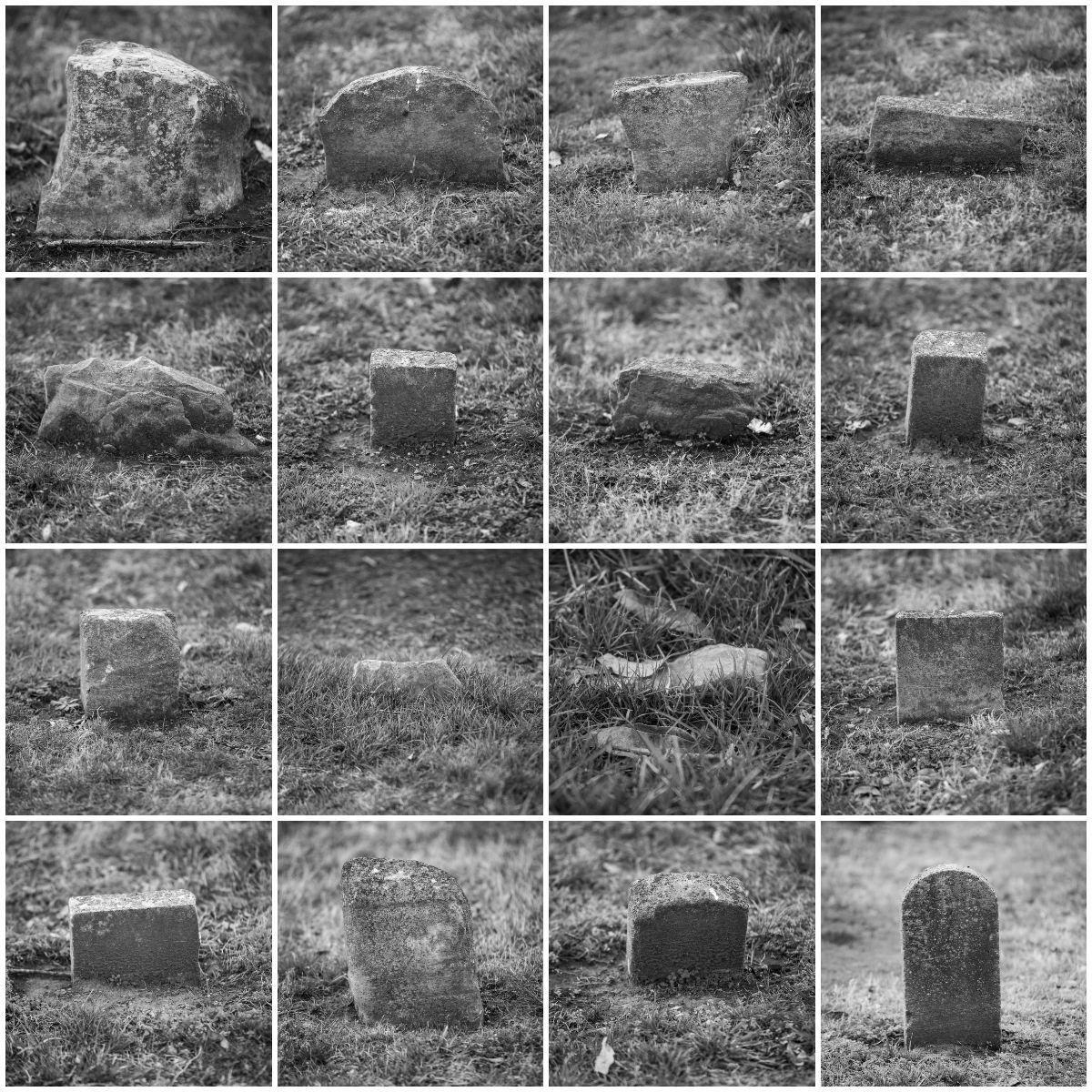 Some of the graves of unidentified slaves at Carnton. 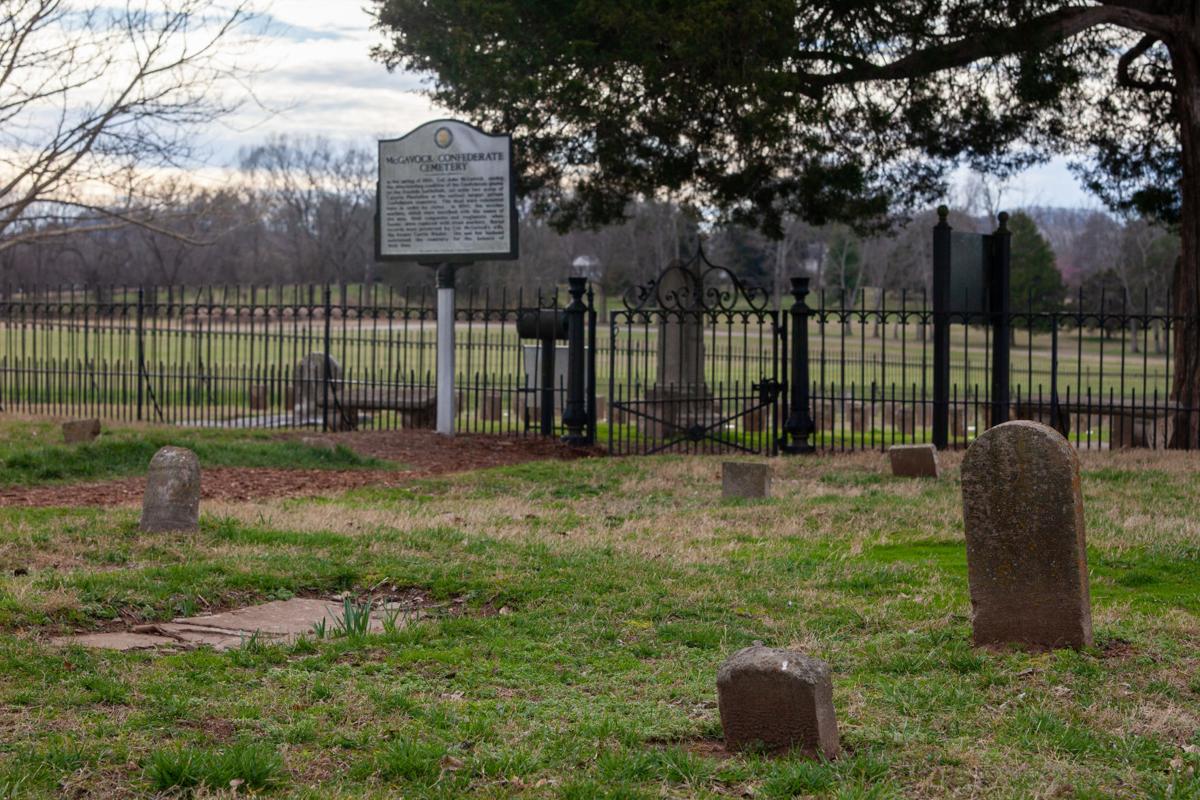 Graves of some of the unidentified slaves at Carnton are marked with stones in McGavock Cemetery separated from the Confederate cemetery by an iron fence. 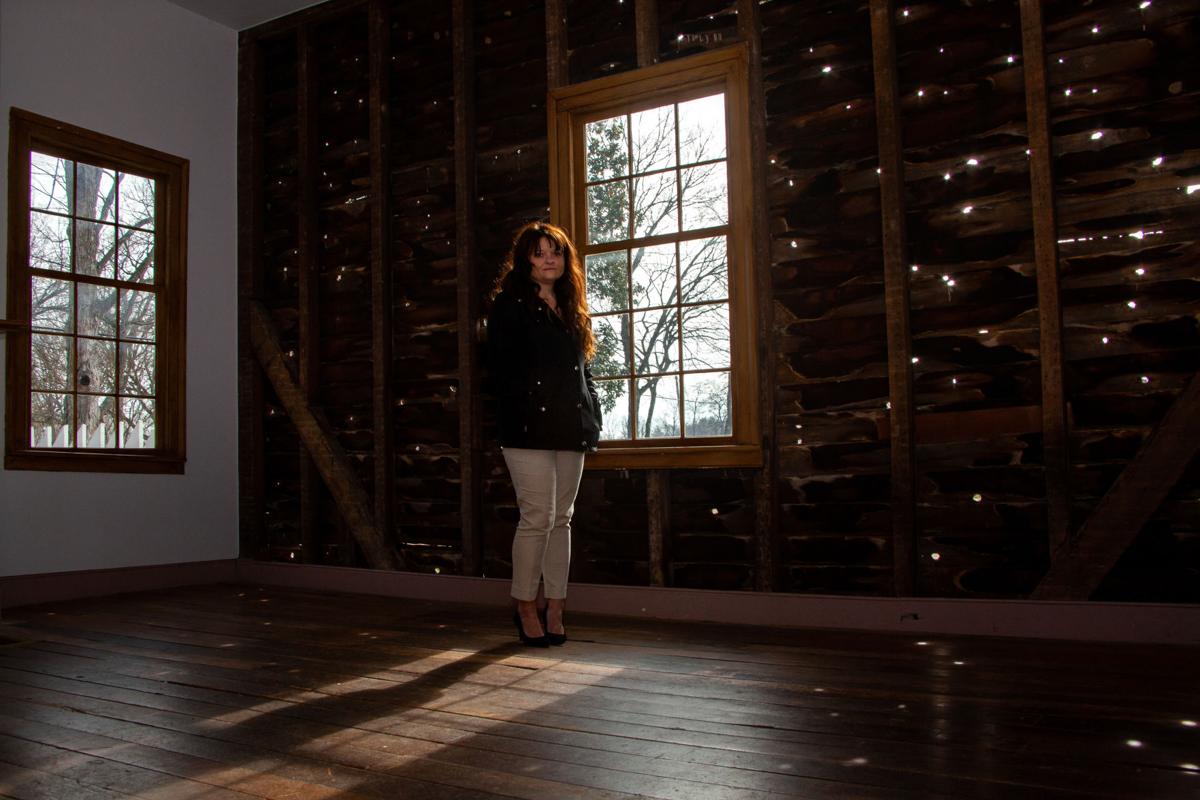 Kristi Farrow, Director of African and African-American History for the Battle of Franklin Trust, stands in a building scarred by Civil War bullet holes at the Carter House. 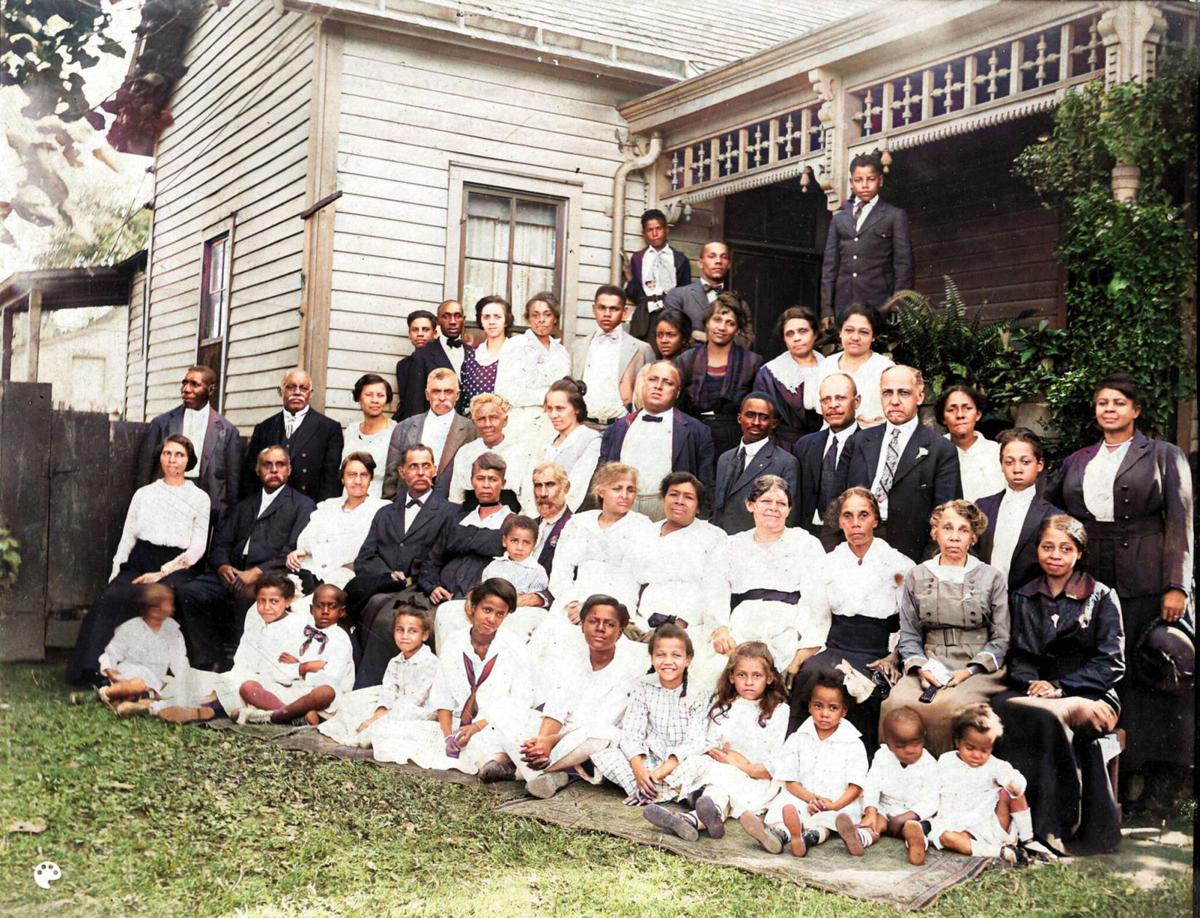 A colorized reunion photo of the grandchildren of Joe and Clara McGavock, enslaved people at Carnton, from 1919. 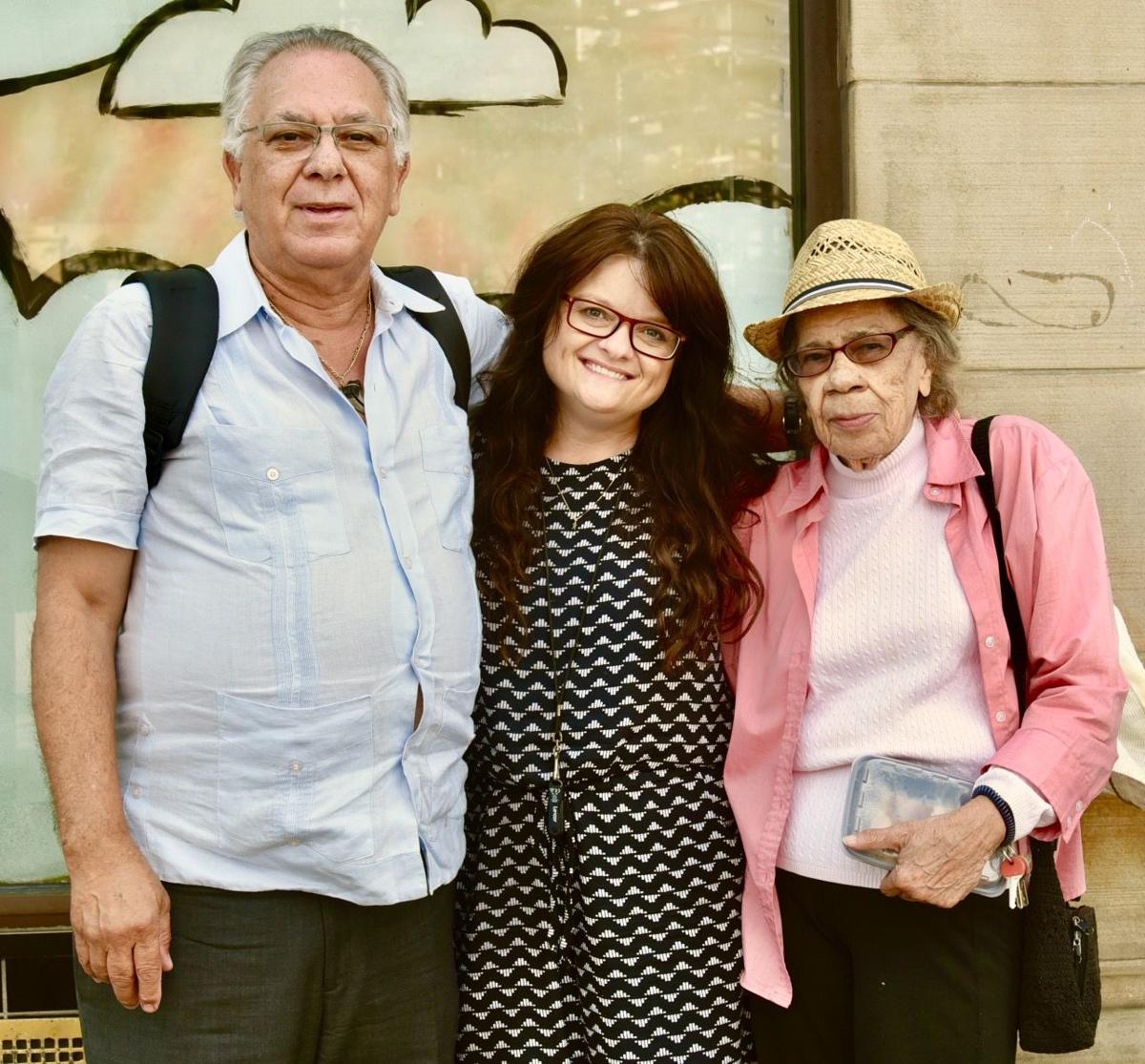 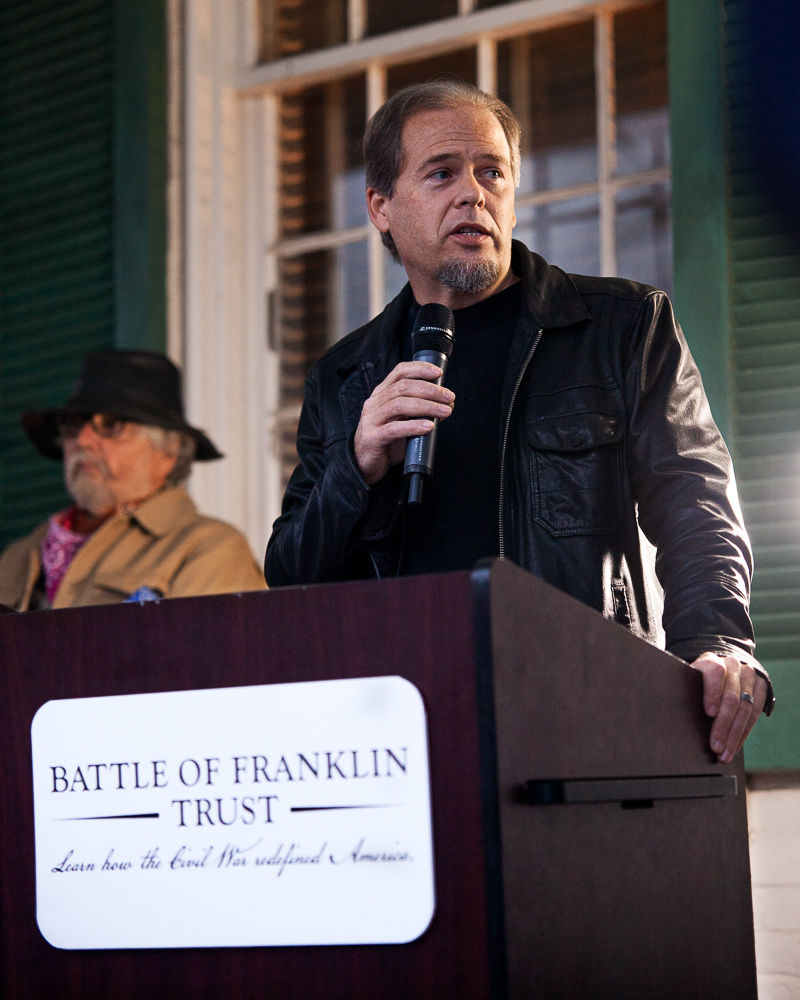 In December 2019 the Battle of Franklin Trust named Kristi Farrow as the Director of African and African-American History and announced the expansion of the Slavery and Enslaved Tours in an effort to educate the public on the realities of the impact of slavery in Williamson County.

BOFT’s CEO Eric Jacobson said that the educational and historical effort has expanded in both variety and depth of the truths documented and displayed, pointing out the complications and intentional presentations of the challenging history and impact of slavery at Carnton, the Carter House and throughout Franklin and the entire nation, such as the distinction between African and African-American history, both of which are a part of the history of slavery in the U.S., but encompass separate eras.

“That was intentional, because we’re studying an arc of time here or interpreting and arc of time that’s really at least 100 years, from 1776 to 1876. We chose that time frame because 1776 is the founding [of the United States] but 1876 is the end of Reconstruction, and those hundred years set down through the Declaration and the Constitution, who we are,” Jacobson said. “The Civil War then explodes in our faces and we went through 10 years of Reconstruction, and we’ve been dealing with the outline of who we are as Americans, the war, race and the aftershocks of those 100 years to this day."

Starting in 1809 it became illegal to bring enslaved Africans to the U.S., but in 1850 enslaved Africans were still very much present in the enslaved populations across the country in addition to the African-American slaves who were born in the U.S.

Jacobson said that the efforts to expand the reach of that history and education was both out of its significance to the fuller story, and in part a response to two major moments in contemporary American history that reflect the continued struggles of racism — the 2015 murder of nine black parishioners in South Carolina by a white supremacist and the 2017 Unite the Right rally in Charlottesville, Va., that saw riots in the street between white nationalists, Neo Nazis and other groups and resulted in the death of one woman.

“You had these murders in South Carolina, people killed because of the color of their skin, in of all places a church, and Charleston’s reaction was amazing,” Jacobson said. “No violence, no protests, quiet acceptance, forgiveness, trying to figure out what the best path forward was,” Jacobson said. “Then Charlottesville, which was a different kind of thing, and both of those events changed the whole spectrum of I think not just American History, but Civil War history.”

Jacobson said that BOFT aims to teach all people history regardless of the labels of American history, Civil War history, black history or white history.

“I think that we have a responsibility and an opportunity, and I think that we are called to tell he truth about what we were, what we are, what we did to each other both in the enslavement of millions of people, through racial separation, through distorting and misrepresenting the past, and if we do it right, I think we can show people,” Jacobson said. “That we are nowhere near as divided as we were in 1860 or in 1960 — we’re not standing on the edge of a chasm where 700,000 people died, there are not four million people enslaved. It’s not 1960 where black people couldn’t go to the lower section of the theatre and where schools were segregated — we are nowhere near that.”

While Jacobson maintains that contemporary political and societal division is a far cry from that of the past, he also said that BOFT’s work goes beyond the Civil War and takes a look at how the past has impacted more recent history and the modern day. He added that they are constantly looking for ways connect all visitors to these important stories and histories, especially as the demographics of their visitors and the populations in Williamson County become more diverse.

“What Kristi is doing and what we are doing will go far beyond 1876 because those tentacles go into the Jim Crow era and into the modern Civil Rights Movement,” Jacobson said. “You have to some how show them that the Civil War does matter to them, that it does impact them whether they know it or not.”

Farrow, who has worked with the BOFT since 2013, and has been conducting extensive research into the people and their families who were enslaved at Carnton and Carter House, and said that her in-depth research really started about five years ago when she began to investigate an oral history of the enslaved population.

Specifically she began learning about five sisters, which opened the door to the greater fuller story of the lives of Africans and African-Americans who built and lived at Carnton, a history that has many holes and missing pieces.

“You have a lot of things that are inaccurate, but that happens with oral histories,” Farrow said. “When you do any kind of genealogy you know that when you find an oral history you have to pluck out the truth, you have to find it and sometimes that’s very difficult.”

According to the BOFT website, Carnton was built in 1826 by former Nashville mayor Randal McGavock and served as an important piece of the history of Williamson County and all of Middle Tennessee, including having former President Andrew Jackson visit on several occasions.

Farrow said that her tours aim to not only educate visitors about slavery on the grounds of Carnton and the Carter House, but how slavery has shaped all of Franklin.

“In 1815 Randal McGavock was ordered by the county to have his slaves clear, build and maintain a road, and we still use it today,” Farrow said. “That’s impact on our lives, so if you think about back then when you have a county where you have 22,000 individuals and half of them are enslaved — the shoe shop owner had slaves, the county, the churches, you know, everybody’s lives are impacted by shoes and you go to church and you use the roads that are built and maintained by slaves.”

Farrow also said that she doesn’t shy away from the main house on the grounds as some tours focused on slavery do, instead choosing to show visitors how slavery impacted every aspect of life, including the more elegant and well preserved buildings of the slave owners of the time, buildings that were designed, constructed and made beautiful by the hands and skill of enslaved people.

“We’ve been focusing on the house for so long but they’ve been focusing on it in a different way. On slavery tours I take people in the main house, and I don’t want you to just look at the beauty of all the things in the house,” Farrow said. “I want you to look at the table and see all of the beautiful dishes, but think about what they’re serving on these plates because not only did the enslaved labor here at Carnton have to clear the land to plant the seed to cultivate the seed to harvest the seed to feed the animals to slaughter the animals to process the meat to put it in the kitchen to put it on these plates and then you have to clean up. It’s a multi-level task that these enslaved people were doing on a daily basis."

Farrow also aims to educate visitors on the depth and realities of those who bought and sold slaves, noting that white women also played a role in the institution of slavery.

“I think that is an important moment on a tour because it makes people understand that this wasn’t just a male-dominated thing,” Farrow said. “Females owned slaves, and owning slaves gave women independence or freedom from their husbands or other males because you could rent slaves out or have a slave as a personal slave.”

Since finding that singular history, Farrow became dedicated to finding out more about the people and history of the enslaved people in Franklin, using official records and newspaper clippings that discussed the implementation of slavery and later names descendants of slaves who gathered for family reunions, in what Farrow said is often a forgotten part of the story of enslavement, the families who persevered and maintained their bond and love for generations to come.

Some of those descendants are featured in photographs in a display at the BOFT’s Carnton museum which also shows the accomplishments of some of the descendants, from graduating from Frisk University to serving as members of the now legendary Tuskegee Airmen to representing President John F. Kennedy’s administration in foreign affairs.

Farrow has even been able to track down living descendants to share photographs and histories with them and in turn learn first-hand the lives that have been lived since.

“Could any of these people imagined such a future for their children and grandchildren?” Farrow asked.

For Farrow there are many important parts of the tours, the exhibits and the immeasurably important history of Africans and African-Americans who shaped Franklin and beyond within the institution of slavery, but perhaps what stands out most are the 18 small markers that pepper one side of the McGavock family cemetery at Carnton, beside a large stone marker unveiled in November to remember those enslaved, and just over the fence from the Confederate cemetery.

These markers, many just plain stones standing only inches high, mark the final resting places of known slaves, their names lost to history. Stones chosen and placed with care by other enslaved people to remind those living in the 19th century and beyond that someone important did not just die, but lived.

Farrow said that while the persecution and injustice that African-Americans have faced throughout American history did not end with the abolishment of slavery, the people and lives lived were ones of survival, dignity and importance.

“For me the human perspective is so important, and I always make sure that every single person who leaves after my tour understands that these people were survivors, not victims, and the strength that it took them to survive an institution is pretty stunningly amazing," she said.