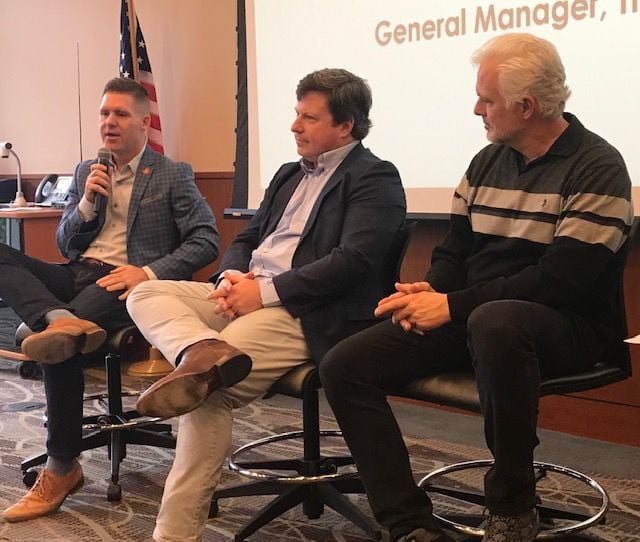 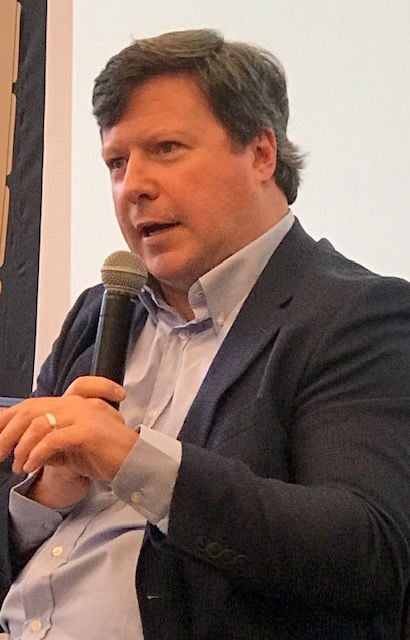 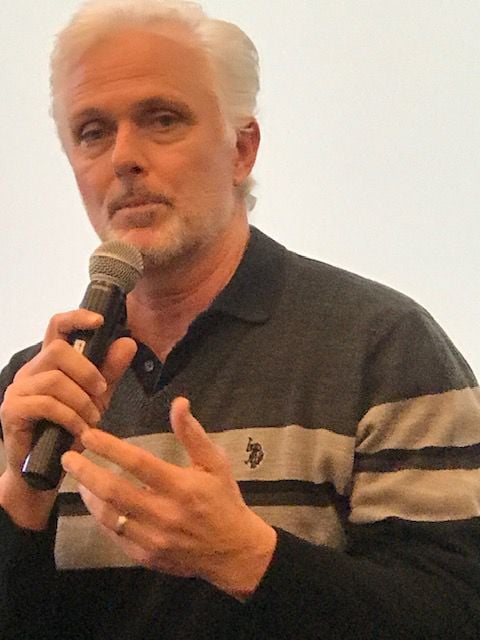 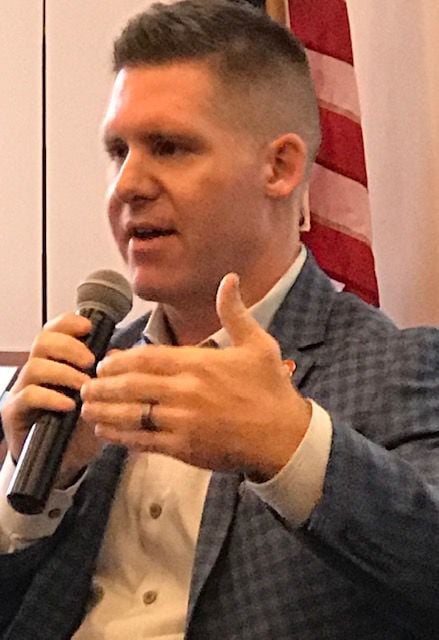 They’re from different parts of the country and work in different careers, but the panelists for Monday morning’s FrankTalks lecture at Columbia State Community College were each focused on three words that clearly define what many adore about living in Franklin and Williamson County — quality of life.

The speakers — Justin Foster from The Harpeth hotel, Adam Ballash with Boyle Investment Company and Patrick Cassidy with Studio Tenn — spent about 10 minutes each explaining their background and their specific roles in their jobs. The theme was “Top People to Know in 2020,” and the event was hosted by Franklin Tomorrow Executive Director Mindy Tate.

For the last decade or so, Studio Tenn has exemplified the very meaning of “quality of life” for Franklin residents and others nearby. It produces high-quality shows at its Jamison Theater in the Factory at Franklin, and it hired Patrick Cassidy as its artistic director in November.

Cassidy, son of Shirley Jones and the late Jack Cassidy, and brother to Shaun, Ryan and the late David Cassidy, is considered a legend in the performing arts community, having worked in Broadway, film and television. He was most recently artistic director of 5-Star Theatricals in California, and he became attracted to Franklin after he brought his son here so he could continue his musical career.

“I saw Franklin, I saw the Franklin Theatre, I saw Main Street, and went, 'Oh, my gosh, I’m in Bedford Falls and this is It’s a Wonderful Life,’” Cassidy told the FrankTalks crowd.

He contacted Todd Morgan, director of Studio Tenn, about the open position for the professional theater’s artistic director and had several visits.

“So within six weeks, they called and said they’d love to have me come and be their artistic director,” Cassidy said.

Cassidy’s wife, Melissa Hurley Cassidy, is a longtime choreographer and teacher, and “she is so excited about getting the education program rolling here in Franklin,” Cassidy said, “to get kids that want to pursue their dreams in musical theater a chance to be on a professional stage.”

The 87-year-old family-owned Memphis company has been in Nashville since 2001, and Adam Ballash joined the firm in 2005 and now oversees Boyle’s commercial portfolio of properties.

“We’ve grown that office from having zero properties and zero customers to being the second-largest landlord in Nashville,” Ballash said.

“Unlike a lot of builders and companies that come to Nashville that may build a building, fill it up and sell it, our MO is to hang on to those assets and manage those long term. So in looking to partner with a community and engage those communities, we’re really looking for an opportunity to bring something to a community that hasn’t been there before and take advantage of that.”

Boyle emphasizes mixed-use plans in its developments, a concept that certainly speaks to very meaning of quality of life. As an example, Ballash pointed out the plans for McEwen Northside, a 45-acre development that will feature office, retail, apartments and a hotel.

Within the development is a space known as a jewel box, meant to be a living room of sorts for Franklin.

“We’ll have a park that in that space,” Ballash explained, “and inside the park we will have two very small retail outlets that flank either side of the park. One of those will be Jeni’s Ice Cream and the other will be a wine and spirts bar that will have some of the first rooftop dining in Franklin. … We hope we hit Franklin’s most important demographic with the opportunity to entertain some of the moms and dads at the wine bar while the kids all go to the ice cream shop.”

Ballash is also directly tied to Franklin’s quality of life pursuit as board president for Friends of Franklin Parks.

In more ways than one, The Harpeth hotel has been designed with extra touches that give it what could be called that “Franklin feel.”

“Our sole purpose is to provide the best experience for both the ‘staycationers’ and travelers from outside of Franklin,” said Justin Foster, who was hired a year ago as general manager for the Hilton-owned hotel.

As one example, Foster pointed to the hotel’s more personal approach to guest registration.

“Guest reception is a little bit different that most hotels, where you have that big barrier, the front desk,” he explained. “With ours, you come in, you sit down. [The clerk] will bring you water and really get to know you. It’s a little more unique from a service standpoint.”

The Harpeth, which opened Nov. 26, is already receiving good reviews from both locals looking for a weekend getaway and tourists. Folks are praising the facility’s two restaurants as well, 1799 Kitchen and Cocktails and McGavock’s Coffee Bar & Provisions.

Even the restrooms are getting noticed. Having befriended Franklin author and historian Robert Hicks, Foster and others on staff came up with a somewhat unusual nod to Southern literature, beginning with Hicks’ novel Widow of the South. When a visitor goes to the public restroom in the hotel, they will hear the audio version of the book being played on a loop.

“It’s’ doing exactly what I wanted it to do,” Foster said. “I wanted people to start talking about it, give them something to talk about that’s unique. That’s what’s great about The Harpeth.”