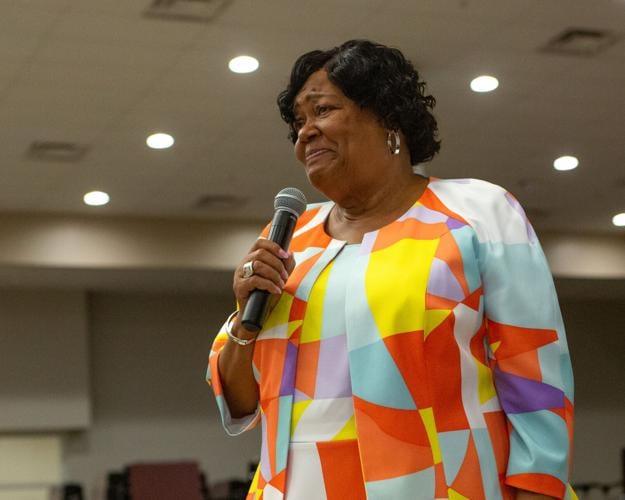 WCS Executive Director of Secondary Schools Willie Dickerson thanks attendees of a 50 year celebration of her career at Franklin High School on August 11, 2022. 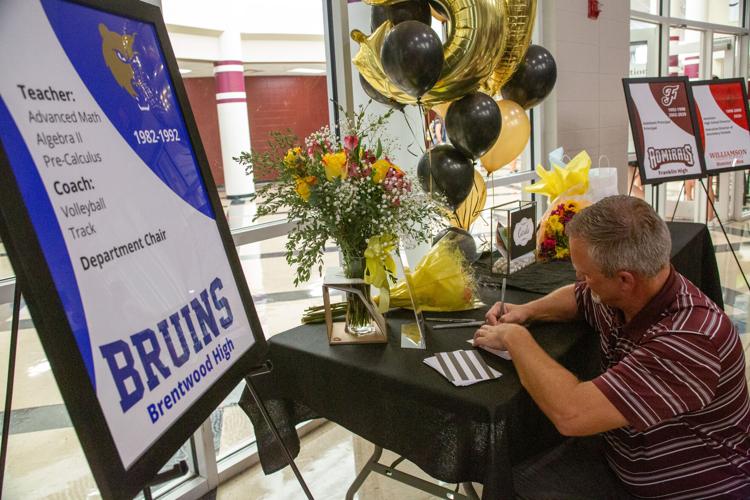 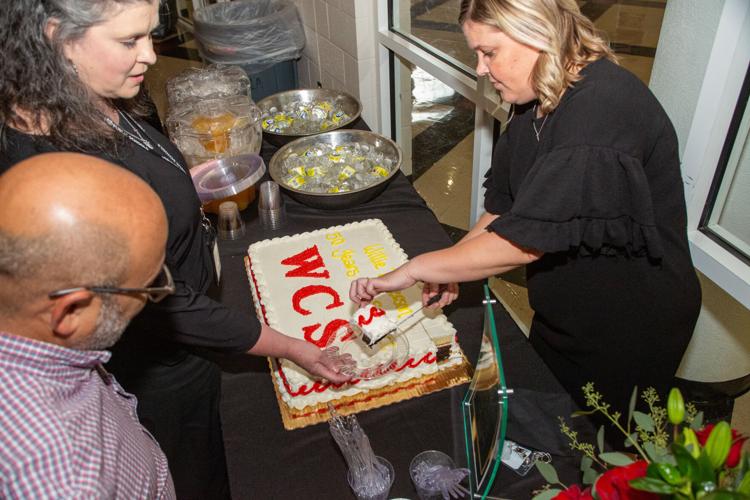 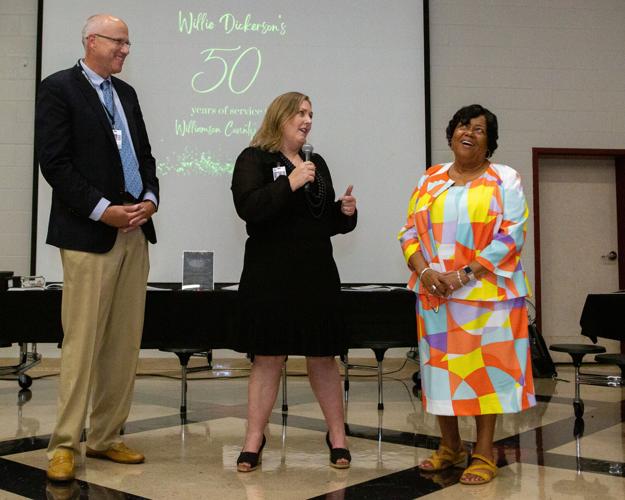 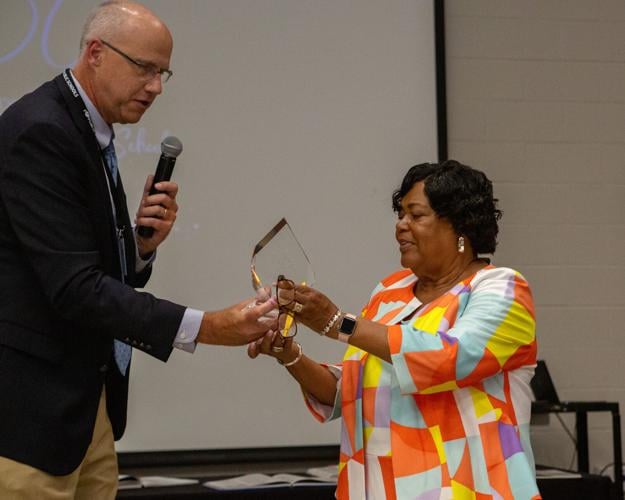 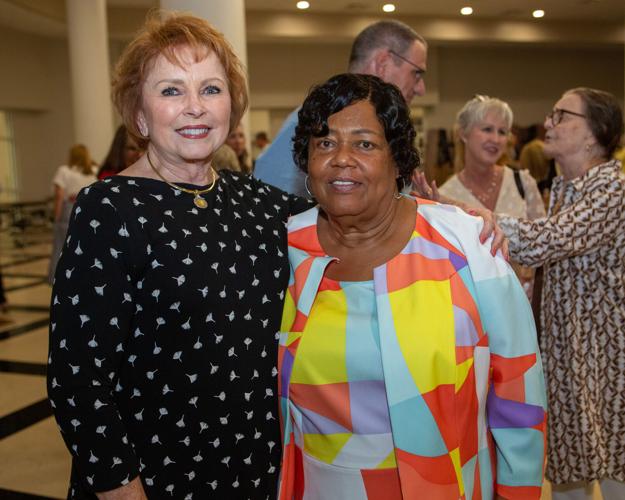 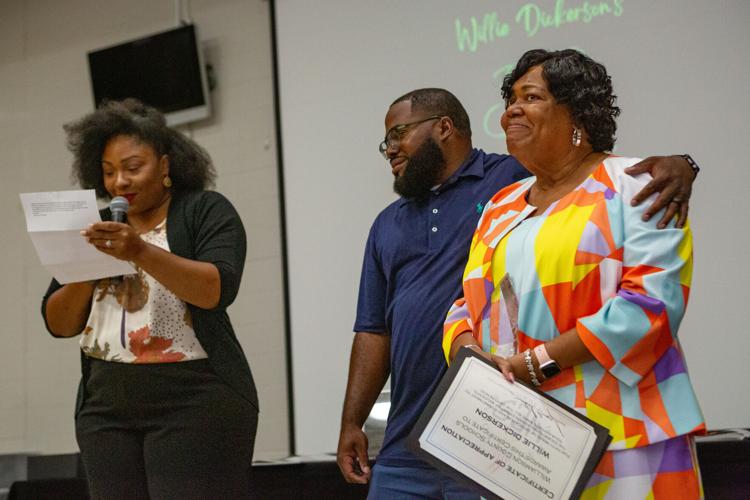 WCS educator Willie Dickerson's daughter Jona Jones and son John Michael support their mother while speaking about her impact on their lives. 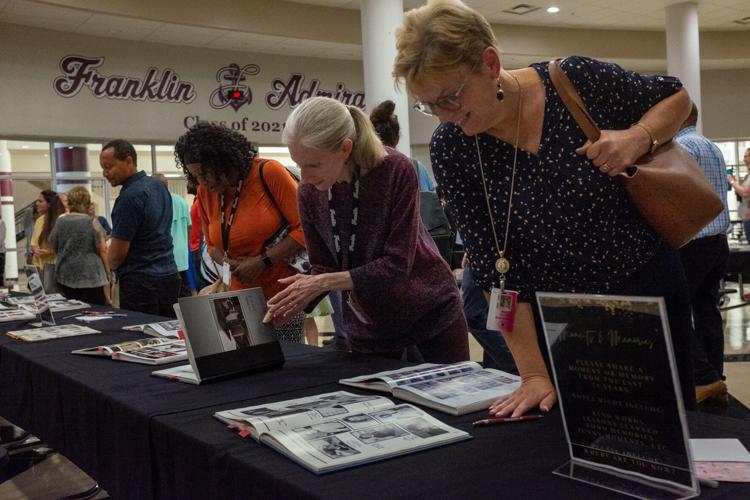 Attendees of a 50 year celebration in honor of WCS Executive Director of Secondary Schools Willie Dickerson browse through dozens of year books that chronical Dickerson's life of service to education on August 11, 2022. 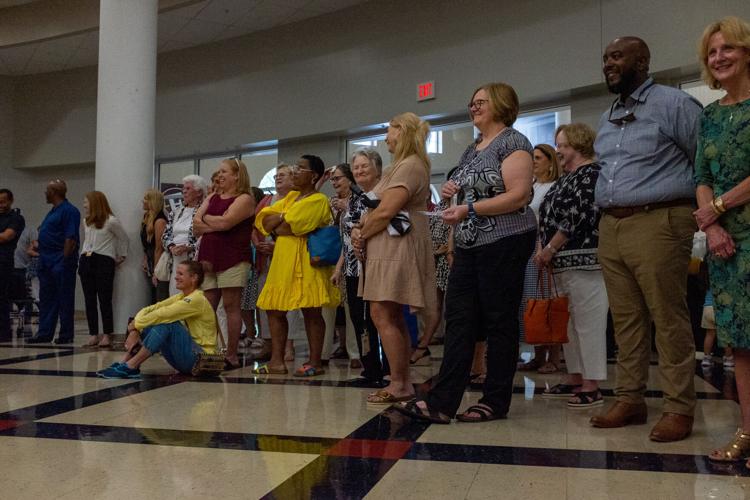 WCS Executive Director of Secondary Schools Willie Dickerson thanks attendees of a 50 year celebration of her career at Franklin High School on August 11, 2022.

Williamson County educator Willie Dickerson was recognized on Thursday by dozens of her professional peers, community members, family members and former students for her 50 years of service to Williamson County Schools.

Dickerson currently serves as WCS' Executive Director of Secondary Schools, having most previously served as Franklin High School's Principal before her promotion in 2020.

Dickerson began her career with WCS in 1972 where she was known by her maiden name, Willie Spencer, and served until 1981 teaching math, coaching basketball, volleyball and track, and working as department chair.

From 1982 through 1992 she taught math, coached volleyball and track, and served as department chair at Brentwood High School, before serving as Franklin High School's Assistant Principal from 1992 to 1998 and then as Principal from 2002 to 2020.

She also served as the district's Assistant High School Director from 1998 to 2000.

Dickerson's leadership, passion, professionalism and impact was a theme of all of the community members who spoke about their experiences with Dickerson.  Although she is now serving in her 51st year, Dickerson is not planning on slowing down anytime soon.

“When I think about a community leader or someone who genuinely is invested in the lives of children, there is no other name I think of in higher regard than Willie Dickerson who truly has poured her life's work, her energy, her time, her gifts, [into her work,]" WCS Assistant Superintendent of Secondary Schools Dr. Leigh Webb said.

“She not only helps raise the children in our community, but continues to be a part of their lives after they walk out of our doors and into communities — Just a model human, a model educator and a selfless person — and today, it's our honor to celebrate the 50 years that she's dedicated, but also to celebrate that she's still rocking it like she probably did 50 years ago,” Webb said to an eruption of cheers from the crowd of dozens of attendees.

“From the day she started in 1972 to now, to Leigh's point, Willie has affected a lot of folks, and I want all of you who have worked with her in past years to know that from my perspective, she's having an incredible impact right now,” Golden said.

“What she does is lead by example and by advice, by work, and by growing our administrators. We hear nationally that the shortage of teachers will soon be a shortage of high-quality administrators. We are blessed here because Willie is growing them right now, doing excellent work just as she has done for the past 50 years.”

Dickerson is also a member of the last graduating class of Natchez High School, and many of her NHS classmates attended Thursday's ceremony, recalling how she was a community leader even as a student.

The event included cake, balloons, and a display of dozens of yearbooks, all opened to pages featuring images of Dickerson throughout her career — Some pages yellowed from time, some images in black and white and others in color — A time capsule of hard work, dedication and sacrifice.

Current and past school employees, student alumni and school board members also spoke about Dickerson's impact, calling her among other things, "a local hero," "a trusted resource," someone who always put her support behind students before anyone else.

While dozens of people spoke about Dickerson, the most impactful statements may have come from her children who embraced her and spoke about not just a community leader but a family leader who just happened to love and guide thousands of children across generations in Williamson County.

“She has been quietly blazing a trail of greatness and holding the door open for others to follow,” Dickerson's daughter Jona Jones said. “She has dreamed big dreams for kids even when they were not quite ready or had them told to dream those dreams for themselves. That is who my mom is.

"You cannot look at the world to have today and not see the magnitude of where she started and where she is now, and to be very clear, she's not done yet."

It was said several times throughout the event that Dickerson was not one for the spotlight, but when she spoke she commanded the attention of the room, a respect that has been earned through example.

“I’m just overwhelmed and all I can say is, thank you,” Dickerson told the crowd. “For all of you whose lives I’ve touched, it's been an honor for me, because I always told people, it’s not about me, but it is about you.”